From the Archive: In 2008, Rick Santorum declared, “Satan has his sights on the United States of America.” Though sounding odd to many, Santorum’s Satan talk is common among right-wing Christians who have intervened in U.S. politics before, like President Clinton’s impeachment, as Frederick Clarkson noted in this 1998 article.

By Frederick Clarkson (Originally published in 1998)

Most attorneys who ascend into the rarefied atmosphere of media celebrity-hood are either dashing courtroom warriors, like O.J. Simpson’s Johnnie Cochran, or inside-the-Beltway power types, like Bill Clinton’s Robert Bennett.  The Monica Lewinsky case broke that mold with the unlikely emergence of the family’s Los Angeles-based lawyer, the garrulous William Ginsburg, as a five-talk-shows-per-Sunday phenomenon.

But perhaps even more unusual — and less examined — is the entrance of Paula Jones’s lawyer, John Whitehead, into the exclusive “Burden of Proof” club of TV-courtroom stardom. As the Paula Jones case merged with the Monica Lewinsky case in 1998, the rumpled Whitehead became a fixture as a talking head on Nightline, CNN and other network news shows. 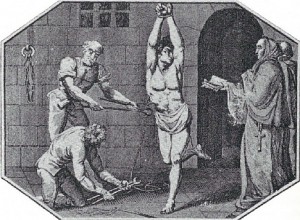 Two priests during the Inquisition use torture to get a “heretic” to repent.

Yet, there has been only superficial attention to who Whitehead is and what he stands for — despite a lengthy public record of controversial remarks. During his legal-religious career, for instance, Whitehead has asserted that democracy is “heresy”; that the defining aspect of history is the “race war” between Christians and non-Christians; and that the harsh Calvinism of the “Puritan Fathers” is the standard to which temporal law should strive.

But, even as the TV networks ran up millions of dollars in expenses covering Monica and Paula, there was next to no attention to Whitehead’s religious-political goals. Those motives might normally have been expected to draw some interest, especially as the possibility grew that the Jones-Lewinsky controversy could lead to some form of impeachment proceedings against President Clinton (which it did later in 1998).

Still, more often than not, the Washington news media served only as a conveyor belt for P.R. boiler-plate. In a typical description, The New York Times called Whitehead’s Rutherford Institute “a kind of evangelical Christian civil liberties union” — which is how Rutherford describes itself in its publicity material. The P.R. handouts just leave out “kind of.”

Are Whitehead’s beliefs too white-hot to handle? Or are reporters of a kinder and gentler generation merely being considerate of people whose religious beliefs are deeply held? Or is that sensitivity a cover for reporters and editors too timid to investigate and fully report potentially controversial beliefs for fear of being labeled religious bigots?

But as Whitehead and his organization sponsored a legal action aimed at crippling a president, it would seem reasonable to trace the trajectory of Whitehead’s ideas and his career. In this case, there is a fairly straight-forward story about his theocratic ideological roots. The story can be found in Whitehead’s books and speeches, those of his close colleagues and founding documents of the Rutherford Institute.

The man who launched Whitehead’s career is Rousas John Rushdoony, perhaps the leading theocratic Christian thinker of the 20th Century. Rushdoony (who died in 2001 at the age of 84) headed the secretive Chalcedon Foundation in Vallecito, California, and was the founder of what is called the Christian Reconstructionist movement. “Reconstructionism” asserts that in order to pave the way for the “Kingdom of God,” the world must develop theocratic republics ruled by “Biblical law.”

Rushdoony’s magnum opus, The Institutes of Biblical Law, was published in 1973. It opposes democracy and argues that the Ten Commandments and the Biblical stories of their adjudication in Old Testament Israel provide the only legitimate legal blueprint for society.

Although few adhere fully to Rushdoony’s view, such prominent conservatives as Howard Phillips and Robert Billings credit Rushdoony’s work as the intellectual catalyst for the Christian Right. Billings, a founder of the Moral Majority, once said, “if it weren’t for [Rushdoony’s] books, none of us would be here.” [See David Cantor’s The Religious Right: The Assault on Tolerance & Pluralism.]

The man whose books launched the Christian Right also inspired and guided the career of John Whitehead. Rushdoony supplied the outline for Whitehead’s first book, The Separation Illusion, which the young attorney researched in his mentor’s library. Published in 1977 — with an introduction by Rushdoony — Whitehead’s book attacks the constitutional doctrine of the separation of church and state.

The book advocates the reorganization of the United States as a “Christian Nation” under the rationale that “the Christians are a spiritual race chosen to serve as the sons of God.” But Whitehead envisions something worse than second-class citizenship for what he calls “the other spiritual race.” He warns ominously that “doom happens to be their lot.”

Whitehead invokes the intolerant Puritans of the Massachusetts Bay Colony as the natural role models for this new government. “The Calvinist doctrine of predestination separates mankind into those who are damned and those who are saved,” Whitehead wrote in The Separation Illusion. “The elect of God,” Whitehead continued, “partake of divine favor while the non-elect are cursed.”

The U.S. Constitution’s recognition that all religious faiths are equal under the law is anathema to Whitehead. In his book, he argues that the doctrine of separation of church and state causes “the true God” to be an “outcast” and a “criminal.”

“Nothing could be further from the truth,” Whitehead insists, than the notion that everyone is “equal in the eyes of God.” Whitehead declares: “To hold that the Christian religion is no better than Buddhism or Judaism is blasphemy.”

Following this line of thought, Whitehead disdains religious pluralism as explicitly anti-Christian. He argues that “the atheists, the American Jewish Committee and the Synagogue Council of America” colluded to “eradicate” state-sponsored prayer in public schools.

Their motive? The “sons of darkness believed that cutting the reciting of prayer from school would aid in their gaining control of the system,” Whitehead wrote. “The public schools are satanic imitations of the true God’s institutional church.” He asserts that when the U.S. Supreme Court decides cases on the basis of religious equality, it “merely assaults the one faith.”

In his book, Whitehead views this conflict between Christian theocrats and civil libertarians in apocalyptic terms. “The Christians serve God and the non-Christians serve the leader of the ungodly, Satan. Conflict results. It’s total spiritual warfare, and it is being fought every second of every day.”

Whitehead sees this war as going badly. “At one time Christians had command of the United States,” he wrote. But “through toleration they receded until the non-Christians grew too strong to combat any longer.” Ambiguously, Whitehead adds that this struggle is “an arena of both spiritual and physical warfare.”

These opinions from Whitehead’s book also were not pulled out of context, nor are they the reflections of youthful ideological excess. They were penned as part of a thoroughly argued book by a 30-year-old constitutional lawyer. That book then launched Whitehead’s career as a “Christian lawyer” and author of other books sounding similar notes. [For a more detailed description of Whitehead’s views, see Chip Berlet’s “Clinton, Conspiracism and Civil Society,” a paper published by Political Research Associates.]

In 1982, five years after publication of The Separation Illusion, Whitehead founded the Rutherford Institute in Charlottesville, Virginia. The Institute, essentially a legal project of Rushdoony’s Chalcedon Foundation, was named after the 17th Century Scottish revolutionary Samuel Rutherford, who called for adherence to God’s laws over those of the King of England. Rushdoony was a member of the Rutherford Institute’s small founding board.

At a Reconstructionist conference in 1983, Rushdoony spoke of “our plans, through Rutherford … to fight the battle against statism and the freedom of Christ’s Kingdom.” He introduced Whitehead as a man “chosen by God” for this work.

Joining Whitehead and Rushdoony on the founding Rutherford board was Howard Ahmanson Jr., at that time a director of Rushdoony’s Chalcedon Foundation and its biggest funder. In a rare 1985 interview with the Orange County Register, the usually secretive Ahmanson declared, “my purpose is total integration of Biblical law into our lives.”

Heir to a huge California savings and loan fortune, Ahmanson was a leading financier of Christian Right organizations and conservative California politicians. Ahmanson-backed Christian Right candidates tipped the scale of political power in Sacramento toward the Republicans and made the Christian Right a potent faction in the state’s GOP.

Another founding director of Rutherford was Frank Schaeffer, son of the late theologian Francis Schaeffer, who was another mentor to Whitehead. The elder Schaeffer’s books, A Christian Manifesto and Whatever Happened to the Human Race, were influential rallying cries for evangelical politicians.

Rounding out Rutherford’s founding board was Jerry Nims, who worked with Whitehead on a legal project for Jerry Falwell’s Moral Majority, which was the leading Christian Right political organization of the 1970s and early 1980s. At one point, Nims took over the reins of the now-defunct Moral Majority.

The Rutherford Institute is best known for “specializing in the defense of anti-abortion protesters and ‘parents rights’ to home school their children,” according to sociologist Sara Diamond. [See Diamond’s Facing the Wrath: Confronting the Right in Dangerous Times.] Under the rubric of “religious freedom,” these cases have benefitted conservative Christians seeking greater latitude to influence public policy and to spread their evangelical doctrines.

But there is a more aggressive plan behind the Reconstructionist revolution. Under a “reconstructed” Christian nation, many offenses would result in the death penalty, including crimes relating to sexuality and religion. Death would be the punishment for adultery, homosexuality, bestiality, promiscuity, heresy, apostasy, blasphemy and “propagation of false doctrines.” [See R.J. Rushdoony’s Institutes of Biblical Law.]

Functioning as the legal arm for the militant wing of the Christian Right, Whitehead’s anti-abortion legal work suggests a tolerance for violence or “physical warfare” in the pursuit of political goals. Rutherford attorneys have represented Operation Rescue militants in connection with abortion clinic blockades. Although Whitehead claims that he is opposed to the use of violence, he offered in 1994 to represent Paul Hill, the admitted and convicted murderer of an abortion doctor.

Yet, as the Rutherford Institute grew in prominence, Whitehead distanced himself from Rushdoony and some of his mentor’s more controversial positions. Whitehead has said he is not a Reconstructionist, and Rushdoony left the Rutherford board of directors (years before his death). But unlike other public figures who have broken with a political movement or school of thought, Whitehead offered no written explanation of his supposed change of heart and mind.

When writer Robert Boston asked Whitehead about The Separation Illusion, Whitehead dissembled, insisting that “he has not read the book ‘in a long time,’ adding that there are probably things in it he would not stand by today.” But Whitehead did not specify which of his views he might recant. [Church & State Magazine, March 1998]

Whitehead’s explicitly theocratic world view raises other questions as he plays a central role in hobbling President Clinton over alleged sexual impropriety. Does Whitehead see the Paula Jones case — and its new spin-off criminal investigation — as a way to impose punishments on an enemy of a “Christian nation?” Is Whitehead’s institute acting as God’s hammer while special prosecutor Kenneth Starr, another Christian conservative, is the anvil?

In The Separation Illusion, Whitehead declares that “the government is to punish the evildoer while protecting the godly in administering God’s justice.” Arguably from that point of view, legal action against perceived immorality in the person of President Clinton might move the United States in the direction of Whitehead’s idealized Calvinist society — and perhaps lessen the severity of God’s “judgment” against the nation for allegedly falling away from that standard.

But whatever his personal objectives, Whitehead’s theocratic agenda would seem to merit at least as much media attention as Paula Jones’s cosmetic make-over or Monica Lewinsky’s choice of entree at a pricy Washington restaurant.

Frederick Clarkson is author of Eternal Hostility: The Struggle Between Theocracy and Democracy, from which this article is adapted. See http://www.frederickclarkson.com/