The Occupy movement is at a divide, with the initial encampments mostly disbanded but with new plans for marches and civil disobedience this spring. There are also schisms between non-violent activists and some anarchists who favor more aggressive action, a split that Stephanie Van Hook addresses.

On April 4, 1967, exactly one year before Martin Luther King Jr. was murdered, he spoke passionately in a sermon at Riverside Church in New York about the war in Vietnam.

In this gripping speech about the hypocrisy of bringing democracy through napalm and the audacity of fostering a brotherhood through war and killing, he made a daring confession: “I could never again raise my voice against the violence of the oppressed in the ghettos without having first spoken clearly to the greatest purveyor of violence in the world today, my own government.” 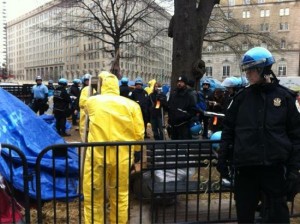 Likely, the most significant social movement in the U.S. in the coming months will be the Occupy movement, as it returns in some numbers to the street. Yet, as the Occupy movement grows more polarized over the strategies of its upcoming spring activities, it might do well to reflect on the logic of Dr. King’s brave statement.

Contrary to what Peter Gelderloos and others have claimed, it is violence and the stasis of a dysfunctional system of oppression that protects the state, not nonviolence. How does violence protect the state? Do a few general Internet searches on the Occupy movement in images to see how that movement is visually narrated (not to mention how it feels to see the portrayed reduction of a promising national movement into a series of police confrontations).

Examining these images with some detachment, we might wonder how this civil war with police began. This examination might also give us some clues about the general population’s confusion about “what Occupy wants,” and the U.S. citizenry’s preference for political candidates who do not create violence on the streets, even if those elected officials ultimately maintain systems of greater violence within our society and between it and other nations.

If the choice is between unruly demonstrations and elections, Occupy risks becoming a reason to turn to politics as usual.

Paradoxically, while the public will be fascinated by police/Occupy confrontations, and while the media will mock activists’ lack of moral character and strength for accepting violence as an effective strategy, it will only make the way safer and clearer for greater state violence to be perpetrated in the name of national security.

Who knows, we may be pulled into a new war with Iran in the coming year, what better way to stifle a movement: delegitimize it (through violence), and then unite Americans against a common enemy!

It is a weapon of mass distraction. Stop worrying about the uptick in home foreclosures, the dead being shipped back from Afghanistan, and the new increases in the Pentagon’s proposed budget, look at the violent window-breakers from Occupy who threaten us all!

Just a few weeks ago, I was in dialogue with an official from the Pentagon’s weapons acquisitions team. The conversation was about the present year’s National Defense Authorization Act and our Metta Center advocacy of alternatives to killing.

His final assessment of our organization’s proposal of a nonviolent policy, a new U.S. policy of deep reconciliation to combat terrorism, was that it “creates guilt, which is not good.” In other words, by repressing guilt, we can continue killing people.

Keep in mind that soldiers are committing suicide in higher numbers than ever before, and therefore we should pay attention to what this guilt is telling us. This mindset of denial echoed by the Pentagon official, integral to waging war, is rooted in a belief about ourselves as separate from one another, in other words, that we should be able to kill one another without remorse, which is the supreme superstition of a violent system.

On the level of the Occupy movement, we might formulate it as a principle: activists cannot harm the actors of the State without harming our movement. The more we fight against the police, the more we are allowing ourselves to be seen as accepting violent tactics, the stronger we make the system we want to change, the deeper that system digs in its heels.

The more we entertain the use of violence, or even create occasions where it can break out, the more violence is justified. Why? Because as Max Weber’s definition of the State suggests, it “upholds the claim to the monopoly of the legitimate use of physical force in the enforcement of its order.”

Violence is the modus operandi of the State. To build a free society, we will have to use different means. Nonviolence is not just protest, it is not simply occupying space and it is not just about adversarial confrontations; it’s about our humanity.

Erica Chenoweth and Maria Stephan document the power of civil resistance when it uses nonviolence as its means to replace leaders. We should read their work and others, but we should not be afraid of going deeper either; more than changing a certain regime at this time, we need to transform a culture.

In short, in order to delegitimize a violent system, we have to delegitimize violence. This change requires us to adopt a principle about human beings and human dignity: we will not use violence against others because we want to create a vibrant culture, a merciful culture, a generous culture because we as human beings have the potential to nurture these qualities within ourselves and each other.

We will not degrade human dignity because it is not worthy of ourselves as people; let this be the motivation for our long-term struggle. The power of the violent State system would stand much less chance against a movement committed to this nonviolent, compassionate spirit of unity.

← Last Chance for 3-Book Set at $29
Triumphalism Over Talking →

7 comments for “Which Way for the Occupy Protests?”