Exclusive: Just as happened before the Iraq War, those who want to bomb Iran are scaring the American people with made-up scenarios about grave dangers ahead, new warnings as ludicrous as the “mushroom cloud” tales that panicked the U.S. public a decade ago, reports Robert Parry.

A weak point in the psyches of many Americans is that they allow their imaginations to run wild about potential threats to their personal safety, no matter how implausible the dangers may be. Perhaps, this is a side effect from watching too many scary movies and violent TV shows.

But this vulnerability also may explain why the current war hysteria against Iran is reviving the sorts of fanciful threats to the United States last seen before the Iraq War. Since right-wing Israelis and their neocon allies are having trouble selling the U.S. public on a new preemptive war in the Middle East, they have again resorted to dreaming up hypothetical scenarios to scare easily frightened Americans. 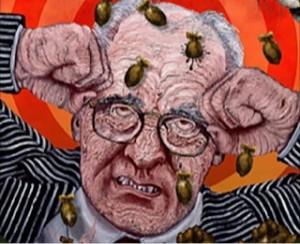 “It is, of course, important for Ya’alon to argue that this is not just an Israeli-Iranian dispute, but a threat to America’s well-being. ‘The Iranian regime will be several times more dangerous if it has a nuclear device in its hands,’ he went on. ‘One that it could bring into the United States. It is not for nothing that it is establishing bases for itself in Latin America and creating links with drug dealers on the U.S.-Mexican border.

“‘This is happening in order to smuggle ordnance into the United States for the carrying out of terror attacks. Imagine this regime getting nuclear weapons to the U.S.-Mexico border and managing to smuggle it into Texas, for example. This is not a far-fetched scenario.’”

But it is a far-fetched scenario. Indeed, there is zero intelligence to support this fear-mongering about such an Iranian plan. That the New York Times would publish such a provocative assertion without a countervailing pushback from serious U.S. intelligence analysts represents the kind of irresponsible journalism that the Times, the Washington Post and much of the mainstream U.S. news media displayed during the run-up to war with Iraq.

The fact is that U.S. intelligence agencies have concluded   and the Israeli Mossad apparently agrees that Iran has NOT even decided  to build a nuclear bomb, let alone that it would do something as nutty as give one to people outside its direct control to attack the United States, thus guaranteeing Iran’s own annihilation. [For more on the intelligence, see Consortiumnews.com’s “US/Israel: Iran NOT Building Nukes.”]

Bergman’s article, which covers nine pages, also manages to avoid any mention of the fact that Israel has a real and undeclared nuclear arsenal. The Times might have regarded this as a relevant point to include both to explain why Iran might feel it needs a nuclear deterrent and to put into context the actual strategic balance in the Middle East. Instead, the Times article poses the nuclear threat to the region as emanating entirely from Iran.

In a New York Times report on Friday, Ya’alon was back again, pushing the claim that Iran had been developing an intercontinental missile that could travel 6,000 miles and strike the United States. “That’s the Great Satan,” he said, using Iran’s epithet for the United States. “It was aimed at America, not at us.”

In response to that claim, even the Times felt obliged to add some factual counterweight, noting that “the assertions went far beyond what rocket experts have established about Iran’s missile capabilities, and American officials questioned its accuracy.” There is also the point that such a hypothetical missile attack on the United States would be detected immediately and ensure a devastating counterattack on Iran.

But it should be clear what the game is. Israeli hardliners and American neocons want a return to former Vice President Dick Cheney’s “one percent doctrine,” as described by author Ron Suskind. That is, if there is even a one percent chance that a terrorist attack might be launched against the United States, it must be treated as a certainty, thus justifying any preemptive military action that U.S. officials deem warranted.

That was the mad-hatter policy that governed the U.S. run-up to the Iraq War, when even the most dubious and dishonest claims by self-interested Iraqi exiles and their neocon friends were treated as requiring a bloody invasion of a country then at peace.

In those days, not only was there a flood of disinformation from outside the U.S. government, there also was a readiness inside George W. Bush’s administration to channel those exaggerations and lies into a powerful torrent of propaganda aimed at the American people, still shaken from the barbarity of the 9/11 attacks.

So, the American people heard how Iraq might dispatch small remote-controlled planes to spray the United States with chemical or biological weapons, although Iraq was on the other side of the globe. The New York Times hyped bogus claims about aluminum tubes for nuclear centrifuges. Other news outlets spread false stories about Iraq seeking uranium from Niger and about supposed Iraqi links to al-Qaeda terrorists.

There was a stampede of one-upsmanship in the U.S. news media as everyone competed to land the latest big scoop about Iraq’s nefarious intentions and capabilities. Even experienced journalists were sucked in . In explaining one of these misguided articles, New York Times correspondent Chris Hedges told the Columbia Journalism Review that “We tried to vet the defectors and we didn’t get anything out of Washington that said, ‘these guys are full of shit.’”

Based in Paris, Hedges said he would get periodic calls from his editors asking that he check out defector stories originating from Ahmed Chalabi’s pro-invasion Iraqi National Congress. “I thought he was unreliable and corrupt, but just because someone is a sleazebag doesn’t mean he might not know something or that everything he says is wrong,” Hedges said. [For details, see Consortiumnews.com’s “Iran/Iraq ‘Defectors’ and Disinformation.”]

Even after the U.S. invasion of Iraq in 2003 and the eventual realization that the fear-mongering was based on falsehoods, President Bush kept up the scary talk with claims about Iraq as the “central front” in the “war on terror” and al-Qaeda building a “caliphate” stretching from Indonesia to Spain and thus threatening the United States.

Fear seemed to be the great motivator for getting the American people to line up behind actions that, on balance, often created greater dangers for the United States. Beyond the illegality and immorality of attacking other countries based on such fabrications, there was the practical issue of unintended consequences.

Which is the core logical fallacy of Cheney’s “one percent doctrine.” Overreacting to an extremely unlikely threat can create additional risks that also exceed the one percent threshold, which, in turn, require more violent responses, thus cascading outward until the country essentially destroys itself in pursuit of the illusion of perfect security.

The “one percent doctrine” is like the scene in “The Sorcerer’s Apprentice” as the lazy helper enchants a splintering broom to carry water for him but then cannot control the ensuing chaos of a disastrous flood.

The rational approach to national security is not running around screaming about imaginary dangers but evaluating the facts carefully and making judgments as to how the threats can be managed without making matters worse.

But Israel’s right-wing leadership and the American neocons apparently believe that the U.S. public is not inclined to rush off into another costly war if a realistic assessment prevails. Americans might be even less supportive if they understood that what Israel is actually after is a continued free hand to launch military campaigns against Palestinians in Gaza or Hezbollah in Lebanon.

At more candid moments, that is what Israeli leaders actually indicate. For instance, Israeli Defense Minister Ehud Barak told Bergman that the real worry was not that Iran would hurl a nuclear bomb at Israel but that a nuclear-armed Iran could offer some protection to the Palestinians and the Lebanese when Israel next decides it must inflict military punishment on them, as occurred in 2006 and 2008-2009.

“From our point of view,” Barak said, “a nuclear state offers an entirely different kind of protection to its proxies. Imagine if we enter another military confrontation with Hezbollah, which has over 50,000 rockets that threaten the whole area of Israel, including several thousand that can reach Tel Aviv. A nuclear Iran announces that an attack on Hezbollah is tantamount to an attack on Iran. We would not necessarily give up on it, but it would definitely restrict our range of operations.”

But Americans are not likely to favor getting dragged into another war so Israel can freely use its extraordinary military might to pummel lightly armed Arab militants and the surrounding civilian populations. For such a cause, would Americans be happy to see gas prices spike, the fragile economic recovery falter, the federal budget deficit swell, and more American soldiers be put in harm’s way?

Almost certainly not. So, the propaganda target again must be that weak point in the American psyche, that tendency to let the imagination run wild with movie-like scenarios of danger and violence.

← What Israel Really Fears about Iran
A Dangerous Game on Iran →

19 comments for “Return of Cheney’s One Percent Doctrine”