President Obama is caught in a dilemma, how to dissuade Israel from going to war with Iran without alienating pro-Israeli voters in November. So, the Obama administration has told Israel that the U.S. won’t support an attack on Iran but has done so quietly, Gareth Porter reports for Inter Press Service.

Chairman of the Joint Chiefs of Staff Gen. Martin Dempsey told Israeli leaders on Jan. 20 that the United States would not participate in a war against Iran begun by Israel without prior agreement from Washington, according to accounts from well-placed senior military officers.

Dempsey’s warning, conveyed to both Prime Minister Benjamin Netanyahu and Israeli Defense Minister Ehud Barak, represents the strongest move yet by President Barack Obama to deter an Israeli attack and ensure that the United States is not caught up in a regional conflagration with Iran. 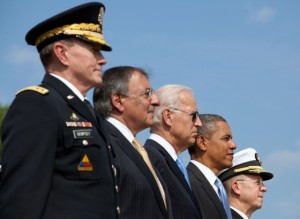 But the Israeli government remains defiant about maintaining its freedom of action to make war on Iran, and it is counting on the influence of right-wing extremist views in U.S. politics to bring pressure to bear on Obama to fall into line with a possible Israeli attack during the election campaign this fall.

Obama still appears reluctant to break publicly and explicitly with Israel over its threat of military aggression against Iran, even in the absence of evidence Iran has decided to build a nuclear weapon.

Dempsey’s trip was highly unusual, in that there was neither a press conference by the chairman nor any public statement by either side about the substance of his meetings with Israeli leaders. Even more remarkable, no leak about what he said to the Israelis has appeared in either U.S. or Israeli news media, indicating that both sides have regarded what Dempsey said as extremely sensitive.

The substance of Dempsey’s warning to the Israelis has become known, however, to active and retired senior flag officers with connections to the JCS, according to a military source who got it from those officers.

A spokesman for the Joint Chiefs of Staff, Commander Patrick McNally, offered no comment Wednesday when IPS asked him about the above account of Dempsey’s warning to the Israelis.

The message carried by Dempsey was the first explicit statement to the Netanyahu government that the United States would not defend Israel if it attacked Iran unilaterally. But Defense Secretary Leon Panetta had given a clear hint in an interview on “Face the Nation” on Jan. 8 that the Obama administration would not help defend Israel in a war against Iran that Israel had initiated.

Asked how the United States would react if Israel were to launch a unilateral attack on Iran, Panetta first emphasized the need for a coordinated policy toward Iran with Israel. But when host Bob Schieffer repeated the question, Panetta said, “If the Israelis made that decision, we would have to be prepared to protect our forces in that situation. And that’s what we’d be concerned about.”

Defense Minister Barak had sought to dampen media speculation before Dempsey’s arrival that the chairman was coming to put pressure on Israel over its threat to attack Iran, but then proceeded to reiterate the Netanyahu-Barak position that they cannot give up their responsibility for the security of Israel “for anyone, including our American friends.”

There has been no evidence since the Dempsey visit of any change in the Netanyahu government’s insistence on maintaining its freedom of action to attack Iran.

Dempsey’s meetings with Netanyahu and Barak also failed to resolve the issue of the joint U.S.-Israeli military exercise geared to a missile attack, “Austere Challenge ’12”, which had been scheduled for April 2012 but had been postponed abruptly a few days before Dempsey’s arrival in Israel.

More than two weeks after Dempsey’s meeting with Barak, the spokesman for the Pentagon, John Kirby, told IPS, “All I can say is that the exercise will be held later this year.” That indicated that there has been no major change in the status of U.S.-Israeli discussions of the issue since the postponement of the exercise was leaked Jan. 15.

The postponement has been the subject of conflicting and unconvincing explanations from the Israeli side, suggesting disarray in the Netanyahu government over how to handle the issue. To add to the confusion, Israeli and U.S. statements left it unclear whether the decision had been unilateral or joint as well as the reasons for the decision.

Panetta asserted in a news conference on Jan. 18 that Barak himself had asked him to postpone the exercise. It now clear that both sides had an interest in postponing the exercise and very possibly letting it expire by failing to reach a decision on it.

The Israelis appear to have two distinct reasons for putting the exercise off, which reflect differences between the interests of Netanyahu and his defense minister. Netanyahu’s primary interest in relation to the exercise was evidently to give the Republican candidate ammunition to fire at Obama during the fall campaign by insinuating that the postponement was decided at the behest of Obama to reduce tensions with Iran.

Thus Mark Regev, Netanyahu’s spokesman, explained it as a “joint” decision with the United States, adding, “The thinking was it was not the right timing now to conduct such an exercise.” Barak, however, had an entirely different concern, which was related to the Israeli Defence Forces’ readiness to carry out an operation that would involve both attacking Iran’s nuclear facilities and minimizing the Iranian retaliatory response.

A former U.S. intelligence analyst who followed the Israeli military closely told IPS he strongly suspects that the IDF has pressed Barak to insist that the Israeli force be at the peak of readiness if and when they are asked to attack Iran.

The analyst, who insisted on anonymity because of his continuing contacts with U.S. military and intelligence personnel, said the 2006 Lebanon War debacle continues to haunt the thinking of IDF leaders. In that war, it became clear that the IDF had not been ready to handle Hezbollah rocket attacks adequately, and the prestige of the Israeli military suffered a serious blow.

The insistence of IDF leaders that they never go to war before being fully prepared is a primary consideration for Barak, according to the analyst. “Austere Challenge ’12” would inevitably involve a major consumption of military resources, he observes, which would reduce Israeli readiness for war in the short run.

The concern about a major military exercise actually reducing the IDF’s readiness for war against Iran would explain why senior Israeli military officials were reported to have suggested that the reasons for the postponement were mostly “technical and logistical.”

The Israeli military concern about expending scarce resources on the exercise would apply, of course, regardless of whether the exercise was planned for April or late 2012. That fact would help explain why the exercise has not been rescheduled, despite statements from the U.S. side that it will be.

The U.S. military, however, has its own reasons for being unenthusiastic about the exercise. IPS has learned from a knowledgeable source that, well before the Obama administration began distancing itself from Israel’s Iran policy, U.S. Central Command chief James N. Mattis had expressed concern about the implications of an exercise so obviously based on a scenario involving Iranian retaliation for an Israeli attack.

U.S. officials have been quoted as suspecting that the Israeli request for a postponement of the exercise indicated that Israel wanted to leave its options open for conducting a strike on Iran’s nuclear facilities in the spring. But a postponement to the fall would not change that problem. For that reason, the former U.S. intelligence analyst told IPS he doubts that “Austere Challenge ’12” will ever be carried out.

But the White House has an obvious political interest in using the military exercise to demonstrate that the Obama administration has increased military cooperation with Israel to an unprecedented level. The Defense Department wants the exercise to be held in October, according to the military source in touch with senior flag officers connected to the Joint Chiefs.

Gareth Porter is an investigative historian and journalist specialising in U.S. national security policy. The paperback edition of his latest book, Perils of Dominance: Imbalance of Power and the Road to War in Vietnam, was published in 2006.

19 comments for “Obama to Israel: No US War on Iran”