Defense Secretary Leon Panetta sees a growing chance that Israel will attack Iran’s nuclear sites this spring despite resistance from the Obama administration. Meanwhile, Danny Schechter attended a conference in Iran on how Hollywood spreads propaganda.

Iran seems to many observers to be next in line for the Iraqi freedom treatment, the latest in a long line of “enemy” nations menaced by overt and covert military threats by the United States and its allies.

As the psyops operations and media propaganda intensifies, you might think war is imminent and that Iran is doing what countries under threat do in these circumstances, such as mobilizing their people and preparing for a bombing onslaught. 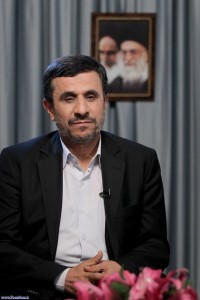 Think again. While I have been told that military targets have been or are being moved around, the atmosphere in Tehran is relaxed with more talk of a cultural battlefield than a military one. There’s a commemoration under way of the 33rd anniversary of the Iranian revolution and an international conference on “Hollywoodism and Cinema” as an extension of an annual Fajr film festival

And that’s what I am doing here, as a guest participant in an event that sees Hollywood as a bigger enemy than the Pentagon. It has become for them an “ism” and is the subject of discussions over its global role in shaping positive attitudes towards what passes for American “civilization,” its relationship to the awakenings and uprisings throughout the world Iran’s Press TV probably devotes more coverage to Occupy Wall Street than any TV channel and Hollywood’s alleged support for Zionism and Israel, a country that’s only cited here as “the Zionist Regime.”

Israel, in turn, is even more hostile seeing Iran as an “existential threat.” Sometimes it looks like both countries both under the influence of religious fanaticism need a stereotyped enemy to rally their own populations. It is Israel that is banging the drums loudest for war.

The conference was opened by Iranian President Mahmoud Ahmadinejad who didn’t have much good to say about Hollywood, which, paradoxically, celebrated its 125th anniversary on Feb. 1.

“All those who work in Hollywood push ideas, based on getting the maximum of profit and pleasure using any possible methods,” Ahmadinejad said. “We do not expect anything from Hollywood.” Speaking softly and philosophically, Ahmadinejad noted that people must “deliver truth and facts,” so that “masses would follow up.”

About 48 foreign scholars are here, and one News Dissector (me). Most of the president’s speech was really about values more than politics emphasizing the importance of the cultural environment. He believes it is impacted negatively by a movie industry that does little to educate customers about the world’s crises.

He rejected Marxism and Liberalism, instead speaking of man as a creation of God who is caught between conflicting pressures to be selfish or to serve humanity. I am not sure that he knew that one of the Hollywood companies leading the charge against Iran is owned by Disney (and is one I used to work for): ABC News.

Fairness and Accuracy in Media singles out a recent ABC newscast as an egregious example of propaganda. “America’s top spy warns that Iran is willing to launch a terrorist strike inside the U.S.,” announced anchor Diane Sawyer at the top of the program. “We’ll tell you his evidence.”

The ABC report was actually very light on evidence. It did, however, pass along numerous incendiary allegations from U.S. government officials without the skeptical scrutiny that is real journalism’s primary function.

Echoing the government, Sawyer set up the report with an assertion that Iran is “more determined than ever to launch an attack on U.S. soil.” Correspondent Martha Raddatz, claiming that the “the saber-rattling coming from Iran has been constant,” told viewers that Director of National Intelligence James Clapper delivered “a new bracing warning …  Iran may be more ready than ever to launch terror attacks inside the United States.”

Reports like this are barely criticized in Iran because there have been so many of them for so many years, with ABC’s earlier “America Held Hostage” series in 1980 a well known example of reporting as incitement.

After Ahmadinejad’s talk, an Iranian friend pushed me into the president’s path where I tried to engage him, asking if he would be willing to talk to American leaders. He smiled, responding, “Washington does not want to have any dialogues.” So that was a non-starter.

I then smiled back and asked if the American people have reasons to fear him and an Iranian nuclear bomb. This time, he laughed as if I was being naive. (I was trying to be provocative.)

Looking up at me, he asked if I thought he was scary, and then denied that Iran was building bombs or threatening the American people. He was very calm as he spoke. Admittedly the evidence for Iran doing so is not very strong and, in fact, a recent report indicated that the U.S. military wants Israel to chill out its agitation and bombing threats.

(Gareth Porter reports on IPS: “Chairman of the Joint Chiefs of Staff Gen. Martin Dempsey told Israeli leaders Jan. 20 that the United States would not participate in a war against Iran begun by Israel without prior agreement from Washington, according to accounts from well-placed senior military officers.”)

I then told President Ahmadinejad that I have been covering Occupy Wall Street and asked what his advice would be to them. As a charter member of the Iranian student movement, he was quick to express admiration for those in the streets struggling for justice in America, but added, “The Wall Street movement has to deepen its work” by intensifying its organizing efforts.

At that point, his security intensified its presence, and after welcoming me to his country, I was pushed gently to the side as he went back to work. My “interview” was over.

The conference continued in the afternoon with more reports on the Occupy Movement and analysis of Hollywood’s impact. On hand to receive an award for his father Oliver Stone was his son Sean who spoke about the growing power of social media. If nothing else, his dad has proven that Hollywood can produce topical dramas and social criticism.

The Zionism issue was spoken to by three anti-Zionist Rabbis and raised in an interview that I did live on Press TV on Thursday night, which I found not so much anti-Semitic as totally uninformed about many in the Jewish community worldwide who are not only not ardent Zionists but are critical of the Israeli occupation of Palestinians and the suppression of their rights.

The host was startled by the vehemence of my views that may not have much support at high levels in the government. I was glad to have an opportunity to publicly challenge Holocaust denial in Iran and combat stereotypes, even as Hollywood legitimately stood accused of creating them of Muslims.

This is my second trip to Iran, a country that is being embargoed, sanctioned and put down in our media with nary a chance to talk back. That’s why I came, to learn more about Iran’s views that have been banished from the airways in Britain, and rarely, if ever, given airtime in what passes for our “free” media. Iran is escalating its media efforts with a new channel in Spanish.

There is more to come, and I am already on kabob overload.

← Obama to Israel: No US War on Iran
In Iran Dispute, Who’s at Fault? →