For many people around the world, 2011 was a very tough year, as millions lost jobs, suffered foreclosures and faced austerity, while the rich did fine and corporations hoarded trillions of dollars in cash. But there were glimmers of hope in the emergence of resistance, writes Danny Schechter.

Out with the old. I would say good riddance to 2011 even as I fear 2012 may be worse, given the financial trends, social chaos and political idiocy that we confront every day. Every time, I believe it can’t get worse, it does.

It seems so clear that the political system is moribund and paralyzed and the economic system may be in worse shape. 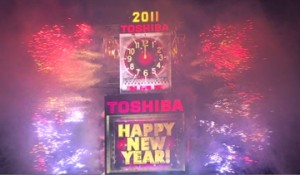 A tiny sliver of the 1 percent may be in charge although not in control. Their own short-term greed makes it unlikely that they can stabilize the system or do any longer-term planning. Their Titanic has hit its iceberg. Some new technologies may keep it afloat for now, but for how long? We lurch from crisis to crisis in an atmosphere of deep denial.

Barack Obama clearly has no new ideas, and the Republican candidates for the most part don’t know what an idea is, as they pander to a know-nothing base to prove that they can be as crass as they are. Television dutifully reports all this as if we should take it seriously. No wonder only 7 percent of the people approve of the money-dominated Congress.

The Republicans can’t get any nastier with each other and now the Democrats are moving in the same direction with the announcement that Dennis Kucinich, whose been gerrymandered out of his district, is now oh, no going after progressive Marcy Kaptur’s seat.

As I think about the year ahead, I am reminded of what I said at this time last year about what I called the year of the “Crumble.” Sound familiar? It’s not a long distance from “crumble” to collapse as democracy gives way to plutocracy.

I wrote then: “The economy continued to crumble for ordinary people with little hope for a quick turnaround, even as some markets surged. The hopes of the jobless for employment crumbled. The faith of the so many homeowners that they will find a way to stay in their homes facing foreclosure is crumbling.

“And so have the hopes of so many of us that our new ‘change is coming’ president would fight for us, would end the wars, would close Gitmo, would abandon torture, would make healthcare more affordable, would give us a government we could believe in; that, too, has crumbled.

“Look back at the devastation of the year gone by: its ugly election, bought and paid for by U.S. Supreme Court-sanctioned special interests; oil spilled by the Gulf-full; wars escalated; climate change unabated; and Wall Street unchecked, and we have to scratch our heads and wonder who is crazier, them or us.

“A year after the earthquake, rubble is still piled up in the streets of Haiti, which has received only two percent of the money raised to reconstruct it. We now have six active military operations underway, rating less and less coverage, only four percent of the network news fare, by one count.

“In contrast, the partisan wars are all TV news covered over and over again, with Fox charging, MSNBC responding, and Jon Stewart joking. There seems to be nowhere to go, but down.

“The pragmatic compromisers of the democratic center may convince themselves they are ‘getting it done’ in D.C., but they are also alienating the Democratic Party base and disgusting all those who believed it would be or could be different.

“Already, there are new escalations in Afghanistan, a rising military budget that goes uncommented upon, and more repressive laws on the way. There will be a price to be paid for their legacy of spinelessness and corporate complicity.

“The media still remains at the center of our conundrum, as we argued ten years ago when we founded the media issues network, Mediachannel.org (now Mediachannel1.org) to advocate for fundamental media change. So we are left where we started, as David Swanson argues, with the need to support independent media, arguing:

“‘[W]e need an alternative not only to Fox News but also to the rest of the corporate media. This is the easiest and most important project anyone can work on. The dream of persuading the labor movement (which can’t even strongly oppose corporate trade agreements when the president is a Democrat) to invest in a new television network should be abandoned. If the George Soros’s of the world haven’t figured out that there’s a communications problem, they never will. But we already have what we need; we just need to make it bigger, and we can do so. We should invest in TheRealNews.com, Thom Hartmann, Free Speech TV, Link TV, GRIT TV, Democracy Now, Pacifica Radio, community radio stations, blogs and web sites.

“‘We should make use of foreign outlets that, for their own reasons, are willing to provide decent coverage of U.S. politics: Al Jazeera, ATN, RT-America, etc. Unsubscribe from the New York Times, stop contributing to any purchasing of ads in it, stop reading it, and read the Guardian online instead. Get connected online, and people will send you the occasional good article or video that all lousy outlets produce. Share that one further, but promote a good website that’s hosting it, not the corporate source.’”

And let’s also get behind WikiLeaks as they fight for transparency and accountability by governments and media. We need to support not only Mediachannel1, but Pacifica Radio, Progressive Radio, Bill Moyers and Laura Flanders’ new shows and sites like OpEdNews.com, CrooksandLiars.com, Disinformation, Firedoglake.com, Global Research, ConsortiumNews, Real News, ZNet, Reader Supported News, etc., etc.

At the same time, we have to go back to an old idea for which online interaction and an email barrage is no substitute: organizing real people. There are more of us than there are of them, but they are organized and focused and we are mostly reactive and emotional.

As James Kwak wrote on The Baseline Scenario, there is a reason for this. Progressives are captured by symbolic politics while the Right is committed to substantive goals. He cites the view of Murray Edelman who divides the political sphere into insiders and outsiders.

“Insiders are basically special interests: small in number but well organized and with specific goals. Outsiders, or the ‘unorganized masses,’ are the rest of us: we have some interests, but we are poorly organized to pursue them and therefore are generally unsuccessful. In particular, Outsiders suffer from poor and limited information, and therefore are especially susceptible to political symbols.”

“Given these differences, the Insiders use overt political dramas as symbols that placate the masses while using covert political activity to plunder them. What we would now call rent-seeking succeeds because Outsiders are dazzled by the symbols while Insiders grab the substance.”

Happily, this year which seems to be ushering in a year not of a crumble but a collapse, is also the year when Occupy Wall Street and its offshoots emerged so powerfully to capture the national imagination and create a force based in the 99 percent willing to fight the Wall Street crimesters and stand for social justice and equality.

I have been having a happier news year ever since OWS emerged. I have been following its bold initiatives in print and in the streets. I have just finished a new book called OCCUPY collecting my reporting for AlJazeera and other websites as well as my News Dissector.com blog.

Despite all the depressing things that are happening and the economic depression that so many of the wisemen of the punditry admit is arriving I am more hopeful than I have been in years. It feels good to be fighting back, and, not just online. The fact that this movement received the media attention it has is a sign that the people of this country are open to something new and will, if well communicated too and organized, join in to make the changes we need so desperately.

In 2012, we have to continue to occupy the high ground and occupy the mainstream. When people lead, others follow. Adelante! Forward! Or. As, Martin Luther King put it, “Tomorrow is Today”

News Dissector Danny Schechter writes daily at NewsDissedector.com. Information on his  latest film is at Plunderthecrimeofourtime.com. Comments to Dissector@mediachannel.org

← A Brief Narrative of Consortiumnews
Slip-Sliding to War with Iran →