The harsh treatment of alleged leaker Bradley Manning is part of a broader campaign to silence government whistleblowers, a pattern that began with Vice President Dick Cheney’s outing of CIA officer Valerie Plame but has expanded under President Obama, says ex-CIA analyst Melvin A. Goodman.

When Pvt. Bradley Manning appeared in a military courtroom at Fort Meade, Maryland, last week, it was his first public appearance in more than 19 months. Manning has been held without trial for the past year and a half; only now is a hearing being conducted to determine if there is sufficient evidence to refer his case to a general court martial.

During this period, Manning, who is charged with transferring classified information to an unauthorized source, has been treated as an “enemy combatant,” subjected to solitary confinement in a maximum-security cell as well as harassment day and night. 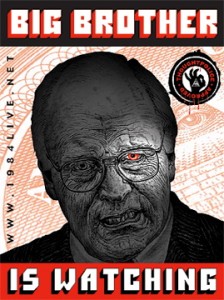 Manning’s inhuman and degrading treatment clearly is designed as a warning to other individuals who might be considering the unauthorized release of classified information. There were periods in his pre-trial confinement when he was forced to stand naked, which conjures up images of Guantanamo and Abu Ghraib, not U.S. justice.

At the current hearings, the government has even been allowed to exclude journalists from portions of the proceedings. The norms of the legal system, including military justice, have been observed in the breach, particularly the right to a speedy trial.

The documents leaked by Manning were an embarrassment to the United States, but not a threat to U.S. security. The overwhelming majority of the documents were governmental boilerplate.

The campaign to intimidate potential whistleblowers or dissidents within the government is consistent with the national security state that the Bush and Obama administrations have created over the past decade.

A new policy of domestic intelligence gathering has permitted not only law enforcement agencies, but intelligence agencies and the Pentagon to collect, store and analyze vast amounts of digital data on law-abiding U.S. citizens. Lawsuits that challenge improper eavesdropping have been met with challenges from the Department of Justice concerning “state secrecy” in order to prevent trials.

The increase in domestic surveillance has often been illegal; the practice of warrantless eavesdropping has been unconstitutional. The FBI has wiretapped conversations between lawyers and defendants, challenging the legal principle that attorney-client communication is inviolate.

The FBI has been given the authority to issue secret National Security Letters without the review or approval of a judge or prosecutor. The letters are a form of administrative subpoena used to obtain records from “third parties,” such as hotels, banks, phone companies, Internet providers and even libraries. Any transaction in digital data is subject to government collection.

The government’s campaign, including the treatment of Manning, to deter others from exposing sensitive and embarrassing information began with the outing of a clandestine intelligence operative, Valerie Plame.

This effort was led by Vice President Dick Cheney in 2003 and was designed to establish the precedent of discipline of the national security bureaucracy as well as to exercise total control over the release of information embarrassing to the Bush administration.

Plame’s husband, Ambassador Joe Wilson, had traveled to Africa for the Central Intelligence Agency in February 2002 to investigate clandestine reports of a possible Iraqi effort to purchase uranium yellowcake. Also in early 2002, the Joint Chiefs of Staff and the Department of State sent high-level representatives to Africa to conduct similar investigations.

All three emissaries determined that there was no substance to intelligence reporting that Iraq was trying to buy uranium yellowcake from Niger. The intelligence community was not surprised because they knew the reports were part of a not-so-sophisticated forgery by members of the Italian military intelligence service.

However, since so-called Iraqi efforts to obtain weapons of mass destruction was the key to the Bush administration’s invasion of Iraq in March 2003, Cheney was livid when Ambassador Wilson began to leak details of his Niger trip to Nicholas Kristof of the New York Times as well as to the Washington Post and the New Republic.

The details first appeared in May 2003, and in July, Wilson went public with a signed op-ed in the New York Times, making the case that the Bush administration had manipulated intelligence to justify the invasion.

Bush administration officials, including Cheney’s chief of staff Lewis “Scooter” Libby, began to tell reporters that Plame worked for the CIA’s clandestine service and that she supposedly had been involved in dispatching her husband to Niger. However, only syndicated columnist Robert Novak published the information concerning Plame’s clandestine affiliation with CIA.

The Office of the Vice President took a huge risk in outing Plame because it was a violation of the Intelligence Identification Act of 1983, which made it a felony to disclose an undercover agent’s name.  Cheney and Libby were willing to take the risk because they wanted to intimidate Wilson as well as other members of the policy and intelligence communities who had sensitive information that would put the lie to the White House justification for the use of force against Iraq.

And the intimidation seemed to work. No CIA or State Department whistleblower stepped forward either to corroborate Wilson’s op-ed or to dispute the chicanery of the White House in the run-up to war. The fact that no one from CIA exposed the deceit of the White House is particularly egregious, because the Agency had provided credibility to the charge that Iraq was trying to purchase uranium.

In October 2002, the CIA had published both a highly classified national intelligence estimate, which was managed by Robert Walpole, and an unclassified White Paper managed by Paul Pillar, indicating that Iraq was “shifting from domestic mining and milling of uranium to foreign acquisition.” Both the estimate and the White Paper were passed to the Congress only days before the vote on the use of force resolution in October 2002.

However, internally, there were deep divisions regarding these claims. In October 2002, the CIA blocked White House efforts to use the information linking Saddam Hussein to purchases of uranium ore for a presidential speech in Cincinnati.

Then, three months later in January 2003, the CIA made no attempt to block the President from making the accusation in his State of the Union address. However, in February 2003, Secretary of State Colin Powell did not use the information in his otherwise regrettable speech to the UN Security Council.

Though Wilson’s rejection of the Niger allegations would ultimately be proved correct, Plame’s career as a clandestine services officer was nevertheless ruined.

The unconscionable treatment of Manning and the reckless handling of the Plame-Wilson affair are two of the most dramatic examples of the Obama and Bush administration’s creation of a national security state, but they are not alone.

The campaign against a whistleblower from the National Security Agency, Thomas Drake, similarly threatens American access to important information. Drake passed unclassified information about fraud, waste and abuse at NSA, only after failing to get action from his own agency’s inspector general, the Pentagon’s inspector general, and congressional intelligence committees.

Every key ruling in the case went against the prosecution, and Drake eventually pleaded guilty to one charge of misuse of an authorized government computer; he received a sentence of one-year probation and community service. However, like Plame, Drake will never again be able to work in his chosen field. [For details, see Consortiumnews.com’s “What Country Do We Want to Keep?”]

Earlier this year, William Welch II, the federal prosecutor who had overreached in pressing espionage charges against Drake, issued a subpoena against James Risen, a reporter for the New York Times.  The Justice Department wanted Risen to testify against a former CIA officer, Jeffrey Sterling, who is facing felony charges for leaks of classified information.

Risen has been a target of federal leak prosecutions since he exposed the Bush administration’s warrantless eavesdropping program in 2005. The shot across Risen’s bow is aimed at all national security reporters who receive classified information.

As a result of the treatment of Manning, Drake and Risen, potential whistleblowers will certainly think twice before going to the press. And it is possible that journalists, less courageous than Risen, will think twice before accepting and using such information.

A double standard is at work here. Officials at the highest levels of government can pass sensitive information to anointed journalists such as Bob Woodward, who typically receives sensitive and classified information for his books. However, lower-level officers must keep their mouths shut about government perfidy.

This trend is particularly regrettable because government oversight processes have been severely weakened during the Bush and Obama administrations. The Offices of Inspector General, particularly at the CIA and the Department of Defense, have been downgraded and significantly weakened. The House and Senate Intelligence Committees are unwilling to investigate illegal conduct in the intelligence community.

President Obama, who endorsed protection for courageous whistleblowers during his campaign, has been both unwilling to investigate crimes of the Bush administration and most willing to invoke the Espionage Act of 1917 to harass genuine whistleblowers.

We expected a Bush/Cheney administration to bend the law in their direction. But who would have expected Obama, a Harvard-trained lawyer and a teacher of constitutional law, to follow suit?

Melvin A. Goodman, a former CIA whistleblower, is senior fellow at the Center for International Policy and adjunct professor of government at Johns Hopkins University.  He is the author of the forthcoming “National Insecurity: The Cost of American Militarism” (City Lights Publisher).  Goodman’s email address is goody789@verizon.net.

← Braveheart, Edward I and Bush
You Are Consortiumnews.com →

8 comments for “The Bush/Obama War Against Truth”