From the Archive: This week, House Republicans fancied themselves reliving Braveheart’s Battle of Stirling as they blocked a compromise to extend a tax cut for 160 million working Americans after having protected tax breaks for the rich a misguided metaphor from the Scottish patriot’s real history that Robert Parry researched in 2005.

In a dark and musty bar in Stirling, Scotland, a working-class fellow named Colin reminded me why wars especially invasions are to be avoided, lest they engender hatreds that can divide people and lands for generations and even centuries.

Americans with shorter historical perspectives tend to underestimate this fact, unless they were part of some ethnic or regional group that has borne the brunt of a military occupation, such as Native Americans or old-time Southerners, who still call the Civil War “the War of Northern Aggression.”

For many people in the world, grievances of past centuries can be as real as the events of last week and often more powerful. Animosities born of brutality and perceived injustice can distort relations even between countries with strong economic and cultural ties. 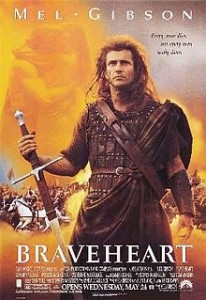 Which is what Colin, with his close-cropped hair and strong Scottish accent, recalled to me as we sat in the bar on the night of July 4, 2005, talking about the bloody wars waged against Scotland and Wales by Edward I, the ruthless and cunning English monarch of the late 13th Century.

My conversation with Colin and his spike-haired college friend David was the sort of serendipity that comes with foreign travel. Off-duty guides from the nearby Stirling Castle, both were mildly intrigued by my reason for being in their gritty, central Scottish city of Stirling:

My wife and I were taking my 16-year-old son and one of his friends on what I had dubbed the “Edward I/William Wallace tour” of the United Kingdom. (Yes, it is that much fun to be one of my kids.)

Our tour had started four days earlier in London, after we had arrived from Washington. We began our little quest at the end of life for the two historical figures.

First, we searched through Westminster Abbey for Edward I’s tomb, upon which Scots are reputed to spit even seven centuries later. We found its location, although access to the tomb itself was cordoned off to the general public.

Later, we toured the Tower of London, a castle best known as a prison for political enemies, many of whom met the grisly fate that Edward I and other English monarchs meted out to “traitors.” While victims of royal blood faced relatively quick death from beheading, lesser-born victims were dragged through the streets, partially hanged, castrated and disemboweled before their hearts were cut out. Then they were decapitated and their bodies chopped into quarters.

It was that fate that awaited Scottish hero William Wallace also known as “Braveheart” who led the Scottish resistance to Edward I’s military campaigns against Scotland in the 1290s. Wallace was captured in 1305 and taken to London for a show trial at Westminster before being condemned.

Edward I ordered Wallace’s torture to be especially deliberate with his entrails to be pulled out inch by inch as a warning to Scots to cease all rebellion. On Aug. 23, 1305, Wallace was dragged some four miles through London streets to a market area called Smithfield, where his public torture and execution were carried out.

After completing our visit to the Tower of London, we took the Underground to the Barbican station and then walked to the Smithfield market area in search of a plaque that marks the location where Wallace was drawn and quartered.

Following directions I got from a gentleman who sang in the choir at the Medieval-era St. Bartholomew’s Church, we walked 20 paces beyond the church grounds, looked to our left and found Wallace’s plaque on the wall of an adjacent hospital building. In front of the plaque, someone had left a display of fresh flowers.

A few days later, another part of our U.K. trip took us to northern Wales, which Edward I had subdued with his usual ferocity, before turning on Scotland.

In Wales, Edward I known as “Longshanks” because of his height had imposed his dominion over the Celtic population by constructing a network of mammoth castles in important towns, a strategy that strangled Welsh resistance but drained the English treasury. We visited two of Edward’s castles one at Conwy and another at Caernarfon (near where our Parry ancestors had lived).

After throttling Wales, Edward I turned his attention to Scotland, where Gaelic tribes had resisted external control for a thousand years, since the days of the Roman Empire. In 1297, Edward’s army without him in command marched north to crush Scottish rebels led by Wallace.

That campaign brought the English army to the strategic Scottish town of Stirling. There, English commanders, including Edward’s treasurer for Scotland, Hugh Cressingham, rashly decided to cross a narrow bridge, giving Wallace his opportunity.

Though outnumbered, the Scottish soldiers charged down a slope and set upon the half of the English army that had made its way across the bridge. Amid the chaos, the rest of the English force couldn’t cross and the wooden bridge collapsed.

The Scots slaughtered half the English army, driving many into the river where they drowned. Among the dead was Cressingham, whose skin was cut off and sliced into Scottish battle ribbons. (The producers of the Mel Gibson movie, “Braveheart,” were running short of money when they filmed the battle, so they set it in a field instead of around a river. They also put Wallace in the front lines when he actually remained on high ground above the battle.)

(On Monday, as the House Republicans prepared to scuttle the Senate-approved compromise on extending the payroll tax cut for working Americans, some 10 GOP members spoke to their conference about their favorite scenes from the apocryphal battle in “Braveheart,” such as when Wallace has his troops moon the English and then joins them in spearing the English cavalry by raising wooden spikes at the last moment.

(According to witnesses who spoke with Washington Post reporters, some Republican lawmakers were inspired to chant Wallace’s supposed instructions to his troops, “Hold! Hold! Hold! Hold!” On Fox News, Rep. Phil Gingrey, R-Georgia, also deemed this “a ‘Braveheart’ moment” and described the instructions from the House GOP conference to John Boehner, “You, Mr. Speaker, are our William Wallace.”)

The rout at Stirling Bridge forced the English into retreat. Wallace’s army marched south after them, taking the war to towns in northern England before withdrawing back to Scotland as winter weather set in.

The next year, Edward personally led a fearsome new campaign against the Scots. Aided by dissension within the Scottish ranks and using the devastating longbow developed by Welsh archers, Edward crushed Wallace’s army at the Battle of Falkirk. Gradually, Edward tightened his grip on Scotland as Wallace went into hiding and exile.

Seven years later, after Wallace returned to Scotland, he was betrayed by a fellow Scot, taken prisoner by Edward’s forces and paraded before mocking crowds in English towns en route to his grisly fate in London.

After Wallace was drawn and quartered, Edward ordered Wallace’s head put on a spike on London Bridge and his severed limbs displayed over the sewers in the Scottish towns of Newcastle, Berwick-upon-Tweed, Perth and Aberdeen.

Edward’s goal was to make Wallace’s suffering and humiliation a warning to the Scots. Instead, Edward created a martyr who has inspired the Scottish independence movement to this day. After actor Mel Gibson portrayed Wallace in the 1995 movie “Braveheart,” new impetus was given to the cause of Scottish nationalism.

In the decade since the movie, the Scots pursued what they call the “devolution” of their ties to England. With their own parliament and control over many domestic policies, many Scots regarded their land as an independent country only in loose confederation with Great Britain.

On July 4, 2005, our “Wallace/Edward tour” brought us to Stirling, where we met Colin and David, who were drinking beers at the bar after finishing their day’s work as guides at Stirling Castle. It was hard to tell if they were more bemused or impressed that some Americans had bothered to visit the site of Wallace’s execution in London.

Colin especially held Wallace in deep reverence as the archetypal Scottish hero who never bent to the will of England, even in the face of a horrible death. There were other Scottish heroes, Colin said, but none measured up to Wallace.

After Edward I’s own death in 1307, as he was preparing another military campaign against Scotland, Robert the Bruce led the Scots to a major victory over Edward II at Bannockburn in 1314. But Colin said the memory of Robert the Bruce was tainted by his on-again-off-again collaboration with Edward I.

Colin leaned toward me at the bar. “You know a bunch of us Scots are going down to London on the 700th anniversary of Wallace’s death,” he said. “We’re going to follow the route that Wallace took through London, to where he was executed in Smithfield.”

It struck me that the calm commitment on Colin’s face was a lesson that should not be lost on George W. Bush and other modern politicians. However justified they might regard their military operations in other lands, those wars carry the heavy risk of creating martyrs and enflaming hatreds that could outlast any short-term objectives, just as Edward I’s brutality against Scotland did.

That is one reason why leaders with deep historical perspective really do treat war as a last resort, rather than a casual means for achieving some geopolitical end.

Though William Wallace was undoubtedly a brutal man himself, Edward I’s aggression against Scotland and his martyrdom of Wallace created a legacy that has haunted English-Scottish relations to the present day. As Colin made clear, Wallace’s path of execution on Aug. 23, 1305, is becoming a kind of “stations of the cross” for Scottish independence.

Edward I may have viewed Wallace’s torture and dismemberment as one sort of political warning to his enemies, but that atrocity has evolved into another type of cautionary tale for politicians of all eras if you rely too readily on violence, it can have negative consequences that far outweigh its successes.

← Catholic Bishops vs. Women’s Rights
The Bush/Obama War Against Truth →

3 comments for “Braveheart, Edward I and Bush”