Exclusive: Neoconservatives are livid over President Obama’s declaration that the Iraq War is over, fearing that its disastrous outcome will undercut plans for a new war with Iran. But Republican presidential hopeful Newt Gingrich says, if elected, he stands ready to join Israel in invading Iran, Robert Parry reports.

President Barack Obama is putting the best face on the final American troop withdrawal from Iraq, declaring that the last soldiers will leave with “their heads held high.” Meanwhile, neoconservative war hawks are denouncing Obama’s failure to twist enough arms to get Iraqi leaders to accept “residual” U.S. military bases.

Yet, however it is spun, the Iraq War represents one of the worst strategic defeats in American history. An arrogant President George W. Bush invested about $1 trillion and nearly 4,500 American lives in a conflict that did little to advance U.S. national security interests and overall harmed U.S. standing in an economically crucial part of the world. 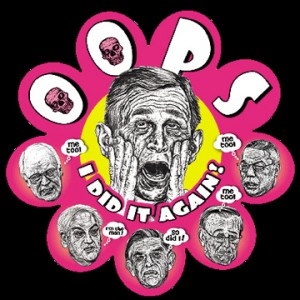 Poster of George W. Bush and his advisers by Robbie Conal (robbieconal.com)

Yes, it’s true that the United States retains a vast diplomatic presence protected by thousands of security contractors. But whatever advantage those huge outposts in Baghdad and other cities will give U.S. companies if any the giant embassy and the sprawling consulates represent more monuments to American hubris than anything else.

The diplomatic outposts were designed when the Bush administration anticipated a de facto pro-consul role for the United States, dictating policy to Iraqi politicians and using the country as a land-based aircraft carrier to project American power across the region. Now, those dreams have been swept away like confetti in an Iraqi sandstorm.

You could hear the bitterness over this defeat in the words and tone of Sen. John McCain, R-Arizona, who took to the Senate floor to decry Obama’s decision to stick with a withdrawal timetable that Iraqi Prime Minister Nouri al-Maliki forced on Bush in 2008, but that neocons hoped would be aggressively renegotiated.

“It is clear that this decision of a complete pullout of United States troops from Iraq was dictated by politics and not our national security interests,” McCain said, adding: “I believe that history will judge this president’s leadership with scorn and disdain, with the scorn and disdain that it deserves.”

McCain left little doubt that if he had won the presidential election in 2008, he would have battled hard for a long-term U.S. military presence in Iraq. In his speech, he also pushed the neocons’ favorite Iraq War narrative which holds that Bush’s heroic “surge” in 2007 with neocon support essentially “won” the war, but that Obama then threw their “victory” away.

Though this neocon narrative was popular in the mainstream U.S. press in 2008, it was never true. There were a variety of other factors that reduced the levels of violence in Iraq, including some like the so-called Sunni Awakening that preceded the “surge” and others like the Shiite militia ceasefire that was predicated on political commitments that the U.S. military would eventually leave.

But the neocons are highly skilled at creating favorable narratives and disseminating them to the American public. Contrary narratives, even when supported by hard facts and strong analysis, usually get short-shrift in the U.S. press. For instance, little U.S. press attention was afforded disclosures from al-Qaeda leaders that they saw the 9/11 attacks as a way to lure the United States into a trap.

Inside Al-Qaeda and the Taliban, a book by the late Pakistani journalist Syed Saleem Shahzad, quoted al-Qaeda leaders explaining how the attacks on New York and Washington were designed to provoke U.S. government “cowboys” into an over-reaction that would outrage the Muslim world and undermine pro-U.S. governments in the region.

Even though many al-Qaeda leaders have died in the process, their strategy might merit a “Mission Accomplished” banner a lot more than Bush’s premature Iraq victory celebration on May 1, 2003, did.

But the neocons are determined that such a narrative portraying them as being tricked into a self-destructive over-reach into the Muslim world and handing a gift to Islamic extremists does not become the accepted history of the Iraq War. So, one can expect an ugly debate over “who lost Iraq?” just as the United States suffered through recriminations over “who lost China?” and “who lost Vietnam?”

Another thing the neocons don’t want is for the American people to connect the painful and costly disaster in Iraq to neocon plans for using U.S. military power to advance Israeli security interests, though that is what the historical record points to. In the neocon fantasies of a decade ago, the invasion of Iraq was supposed to transform it into an ally of Israel and a base to pressure other anti-Israeli Muslim states for “regime change,” especially Syria and Iran.

Then, once “regime change” came to Syria and Iran, the neocons believed support would dry up for Hezbollah in Lebanon and for Hamas in the Palestinian territories, freeing Israel to dictate terms to its Arab neighbors and thus bring a form of enforced peace to the region.

The early outlines of this aggressive concept for remaking the Middle East predated the 9/11 attacks by half a decade, when a group of American neocons, including Richard Perle and Douglas Feith, went to work for Israeli Likud leader Benjamin Netanyahu during his 1996 campaign for prime minister.

The neocon strategy paper, called “A Clean Break: A New Strategy for Securing the Realm,” advanced the idea that only regime change in hostile Muslim countries could achieve the necessary “clean break” from the diplomatic standoffs that had followed inconclusive Israeli-Palestinian peace negotiations.

Under the “clean break,” Israel would no longer seek peace through mutual understanding and compromise, but rather through confrontation, including the violent removal of leaders such as Iraq’s Saddam Hussein.

The plan called Hussein’s ouster “an important Israeli strategic objective in its own right,” but also one that would destabilize the Assad dynasty in Syria and thus topple the power dominoes into Lebanon, where Hezbollah might soon find itself without its key Syrian ally. Iran also could find itself in the cross-hairs of “regime change.”

But what the “clean break” needed was the military might of the United States, since some of the targets like Iraq were too far away and too powerful to be defeated even by Israel’s highly efficient military. The cost in Israeli lives and to Israel’s economy from such overreach would have been staggering.

In 1998, the U.S. neocon brain trust pushed the “clean break” plan another step forward with the creation of the Project for the New American Century, which urged President Bill Clinton to overthrow Saddam Hussein.

However, Clinton would only go so far, maintaining a harsh embargo on Iraq and enforcing a “no-fly zone” which involved U.S. aircraft conducting periodic bombing raids. Still, with Clinton or his heir apparent, Al Gore, in the White House, a full-scale invasion of Iraq appeared out of the question.

The first key political obstacle was removed when the neocons helped engineer George W. Bush’s ascension to the presidency in Election 2000. However, the path was not fully cleared until al-Qaeda terrorists attacked New York and Washington on Sept. 11, 2001, leaving behind a political climate across America for war and revenge.

Of course, the U.S. invasion of Iraq in March 2003 had other motives besides Israeli security from Bush’s personal animus toward Saddam Hussein to controlling Iraq’s oil resources but a principal goal of the neocons was the projection of American power deep into the Muslim world, to strike at enemy states beyond Israel’s military reach.

In the heady days of 2002-2003, when the high-tech capabilities of the U.S. military were viewed as strategic game-changers, neocons were fond of joking about which way to go next, into Iran or Syria, with the punch-line, “real men go to Tehran.” However, the Iraqi resistance to the U.S. conquest dashed those hopes. “Real men” had to postpone their trips to Tehran or Damascus.

These grandiose geopolitical ambitions were rarely mentioned publicly. Instead, the American people were scared with falsehoods about Iraq’s WMDs and Hussein’s ties to al-Qaeda.

But the Iraq debacle, now given a stamp of finality by Obama’s removal of the last U.S. combat troops, threatens to solidify among many Americans a recognition that they were “had” by the neocons, that the Iraq War was a terrible mistake that shouldn’t be repeated again.

So, the neocons must move quickly to change that perception, by asserting that the war had actually been “won” by Bush but that Obama “lost” it. That way, Americans won’t close the door on the next neocon adventure, a war with Iran.

Besides stepping up attacks on Obama, the neocons have regrouped inside the campaigns of several Republican presidential contenders, including Newt Gingrich, Mitt Romney and Rick Perry. In particular, former House Speaker Gingrich is selling himself as the one who would not just bomb Iran but would invade the country with the determination to force “regime change.”

Earlier this week, Gingrich told an audience in New Hampshire that he views the threat from Iran and its alleged pursuit of a nuclear weapon much as the U.S. government worried about the Soviet Union during the early Cold War. A nuclear Iran, Gingrich said, threatened not only Israel but if a weapon were shared with terrorists the United States, too.

“We are not going to tolerate an Iranian nuclear weapon,” Gingrich assured his listeners. But he added that bombing Iran would not be enough, that “regime change” brought by the force of U.S. arms was the only answer. Gingrich played out a scenario of an Israeli prime minister asking a U.S. president for help in a conventional military invasion of Iran, and Gingrich made clear that he, as president, would join the war effort.

“What I won’t do is allow Israel to be threatened with another Holocaust,” Gingrich said. “This is a not-very-far-down-the-road decision.”

Also, the Republicans in Congress as well as the leading presidential hopefuls (with the exception of Rep. Ron Paul) have sided with the neocons in sparing the Pentagon from budget cuts even as the GOP proposes slashing key social programs, including Medicare.

David Stockman, President Ronald Reagan’s first budget director, noted in an op-ed that congressional Republicans and their deficit-hawk budget chairman, Rep. Paul Ryan, backed away from challenging the neocons on military spending. “Ingratiating himself with the neo-cons, Mr. Ryan has put the $700 billion defense and security budget off limits,” Stockman wrote.

So, for Americans who say presidential elections don’t matter, here is evidence that they do. John McCain has said that as president he would have continued the Iraq War indefinitely, and Newt Gingrich says that if he becomes president, you can expect him to launch a new one against Iran.