After the savings-and-loan debacle of the 1980s and the Internet bust a decade ago, hundreds of financial culprits were “perp-walked” to jail. But the big bankers who tanked today’s economy have escaped punishment, an omission that Danny Schechter says must change.

Wall Street has become a battleground, defended by a battalion of New York cops and under surveillance around the clock. There’s a war under way after months of protests and assaults by the non-violent warriors of Occupy Wall Street. So, who’s winning?

On the surface, despite major layoffs and economic setbacks, you would have to say that the epicenter of our financial markets is alive, if not well. The exchanges and banks remain open for business, even if their costs for security are up, and their long-term optimism is way down. 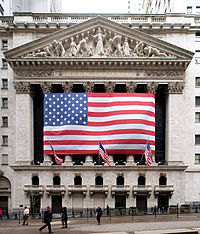 Attempts by occupiers and activists to “shut it down” have so far failed, but they have slowed it down and forced its defenders on the defensive. A sharp critique of this out-of-control capitalism, which was barely heard in the media before the movement began, is now everywhere. The Movement has changed the national conversation.

The gluttons of greed are, at least temporarily, on the defensive. But, is the movement forcing reforms or restraint? Not yet. Europe’s pain so far seems to be America’s gain, as bailouts there drive stock prices here higher.

Also, as we are learning, there is not much that the Federal Reserve won’t do behind the scenes to keep big banks flourishing. We just found out, three years after the fact, that they pumped a whopping $17.7 TRILLION in no interest money into the coffers of financial institutions whose lobbyists and media decry big government intervention and the evils of socialism.

Down, the street, the Occupiers are winning a moral victory just by surviving. Their slogan du jour is now “It’s So Not Over,” even as they lost Zuccotti Park, which was their base and have suffered setbacks across the country by what seems like a coordinated municipal counter-offensive.

Public opinion seems to turn against protesters when there’s violence or conduct considered outrageous, but the New York Times reports, “The Occupy Wall Street protests continue to spread around the country, highlighting grievances some Americans have about banks, income inequality and a sense that the poor and middle class have been disenfranchised.

“A recent New York Times/CBS News poll found that almost half of the public thinks the sentiments at the root of the movement generally reflect the views of most Americans.”

So, on one level, Wall Street is losing whatever positive reputation it still may have enjoyed, even if the Movement challenging it still lacks a specific program. What would winning consist of in this context?

For the financiers and the investors, it’s all about money and they are still making it, even if bonuses go down for a while. They continue to deepen inequality by transferring wealth from the rest of us into their pockets. The 1 percent is hardly hurting the way the 99 percent is hurting.

The lobbyists for the 1 percent and the politicians that follow their lead have managed to thwart any real financial reforms, mild as they were. Risky derivatives remain risky. The industry has succeeded in keeping a shadowy banking system non-transparent, despite the credit-rating agencies marking down the risks and the state Attorney Generals who are beginning to summon up the courage to file lawsuits.

Critics of Occupy Wall Street want the movement to grow up, be more focused and “pragmatic” as in engaging in policy debates defined by others. In a specious denunciation of “The Decadent Left,” Russ Douthat, one of the New York Times’ Op-Ed wags, snipes  that the “movement was dreamed up in part by flakes, and populated in part by fantasists.”

To him, being political means moving from the outside to the inside and losing the very qualities that built the Movement. It means not aligning with unions or building coalitions. It means playing the Game.

In contrast, I believe the Movement has to stay true to itself, while making all of these issues more personal to the American people who are suffering because of Wall Street’s manipulations. The people have to be told who is really responsible for their terrible distress:  the loss of jobs, pensions and homes.

The information is there, but the movement needs to find ways of dramatizing it and communicating it, the more specific and less rhetorical the better. It’s time for an economic justice campaign that names and shames the reprehensible Wall Street elite, a crew that constitutes less that .1 percent of the 1 percent.

We have to demand three I’s and a P:

–Investigate who stole what

That’s how to send a signal to Wall Street:  Make it personal!

Demand that prosecutors in cities, states and the U.S. Justice Department explain why none of the big banksters responsible for our economic misery have, so far, gone to jail. (More than 1,700 fraudsters were imprisoned after the far less serious S&L crisis.) These CEO’s knew what they were doing and they are getting away with it!

This approach won’t transform the economy but it will make the targets of the campaign more concrete, visible and immediate. It raises demands for economic fairness that most Americans support.

The current system of government agencies agreeing to Wall Street settlements without anyone admitting responsibility has to stop. The cover-ups by politicians and the complicit of media have to stop. We have had bailouts. Now, its time for a “jailout!”

Talk about an issue that so many agree on but yet has been so politicized and so minimized by prosecutors seeking excuses. Yes, the industry has a flotilla of high-priced lawyers who know how to evade and avoid justice. Yes, they have rewritten the laws to make it hard to convict.

But, until now, there has been no one in the streets, with protests or pitchforks demanding justice. Occupy Wall Street has shown that you can influence the agenda. This issue is a no-brainer. Who will pick it up?

News Dissector Danny Schechter directed the DVD Plunder on financial crimes, (PlundertheCrimeofourtime.com.) His new book OCCUPY, with his many blogs and essays on Occupy Wall Street will be out soon (Newsdissector.com)  Comments to dissector@mediachannel.org

6 comments for “Time for a Wall Street ‘Perp Walk’?”