The post 9/11 spending splurge by the U.S. national security state has given rise to a new industry devoted to developing technology for spying on almost everyone. These gizmos now represent a threat to what’s left of personal privacy, writes Lawrence Davidson.

It was certainly ironic that the Wall Street Journal, the mouthpiece of capitalist ideology, would publish an exposÃ© on “a new global market for off-the-shelf surveillance technology,” entitled “The Surveillance Catalog” and subtitled “where governments get their tools.”

The WSJ story references some “200 plus marketing documents” from companies worldwide and describes an array of surveillance tools designed to rob every person on the planet of his or her privacy. Here are just a few examples of the kinds of capacities that are being offered for sale to government agencies:

–Hacking: hardware and software that take advantage of “black-hat hacking” and “malware” methodologies to acquire a target’s financial and other data. This can now be done to large numbers (“hundreds of thousands”) of people simultaneously.

–Intercept: “infect computers by falsifying web sites or updates of popular software” and then “remote monitor … what the user is doing on the internet.”

–Web Scraping: the gathering of “massive amounts of information” along with the ability to store it and sort it so it can be used by analysts. Among the most important targets are “social networking sites.”

The industry magazine, PC World, called “The Surveillance Catalog” a “creepy read … at best disturbing and at worst unnerving.” PC World also notes that most of the buyers of these tools will be police departments, intelligence agencies and other government departments that now constitute a large part of an “annual retail market for surveillance tools [that] has mushroomed from nearly nonexistent in 2001 to $5 billion today.”

Actually, “unnerving” is something of an understatement. According to The IT Manager Web site, “one vendor executive acknowledged their products could be misused by dictatorships and oppressive regimes. ‘This is a dilemma. It’s like a knife. You can cut vegetables [with it] but you can also kill your neighbor.’”

The executive goes unnamed in the article but the shallow nature of his or her insight does not bode well. Clearly, “dictatorships and oppressive regimes” have no monopoly on “misusing” this sort of “product.” With the USA Patriot Act and the power trips of the George W. Bush administration sadly carried forward by his successor abuse has become the U.S. Justice Department’s middle name.

A 2007 audit of the FBI revealed that the agency had abused its power under the Act “a minimum of one thousand times to secretly obtain personal information” of U.S. citizens. There is absolutely no reason to believe the abuse has ceased.

A knife is for cutting and that entails a wide array of different uses. The products cited in “The Surveillance Catalog” article are not made for a broad variety of purposes. They are made for a very narrow range of applications, all of which are inherently intrusive. Indeed, they are made to invade other’s privacy and that is it.

It is important to keep in mind in whose hands these tools are to be placed: officials in positions of power who really don’t feel bound by the law, even as they see themselves enforcing it. People like: 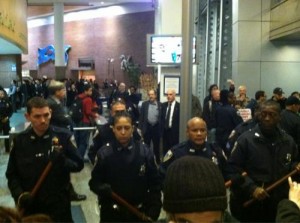 –The Oakland police who have no problem playing at being Storm Troopers against peaceful demonstrators.

–The University of California at Davis police who have no problem casually dousing passive protesters with pepper spray.

–The New York City Police who have no problem spying on innocent Muslim citizens.

–The FBI’s Anti-Terrorist Unit whose unique approach to making us “safe” entails designing their own terrorist crimes and then luring individuals into attempting to commit them.

And on it goes. “Law enforcement” institutions are always at high risk of corruption by virtue of their position and power. Given this fact one might argue that the surveillance tools being slickly marketed to them are actually made to be abused.

Here are some other observations engendered by “The Surveillance Catalog.”

Give some thought to the ideological precepts of capitalism. A major precept is that the capitalist should make profit by producing things that other people want to buy. Yet there is nothing in this prescription that precludes any specific product. Indeed, in theory, a capitalist can produce anything that commands a market.

That means in an entirely “free market,” capitalists will deal in anything that sells: sex, guns, drugs, slaves, you name it. If it sells, capitalists will bring it to market. Unless, of course, the capitalists are working within the law and the product is outside the law, i.e. if the product is illegal. And what makes a product illegal is a law that results in the direct and often necessary regulation of the marketplace. ã€€

Yet, why are some products deemed illegal? One reason is that they are destructive of community bonds and values.

Some illicit drugs have that potential; some forms of deviant sex may also have that potential; and so do the offerings cited in “The Surveillance Catalog.” They can, and no doubt will, make minced meat of the Fourth Amendment of the Constitution which is supposed to guarantee all of us the right to be “secure in [our] persons, houses, papers, and effects, against unreasonable searches and seizures.”

Therefore, it follows that these products should be relegated to the illegal side of the capitalist ledger before they erode what little is left of our community bonds and values – particularly privacy. But who is to enforce this hypothetical regulation if the police and the justice system, including the Supreme Court, have already been led to abuse these powers by the trauma of 9/11?

That is very good question and I am not sure of the answer. Perhaps we need some variation on the Roman Tribune of the people. An ombudsman standing apart but also able to protect.

The trend toward an ever greater abuse of power through the act of spying has apparently created its own capitalist market. And the products designed to meet the demand of that market are now there for all to see.

But many citizens will not look because they feel that the government is only interested in “subversives” and not them. This is a naive assumption. “The Surveillance Catalog” is a danger to us all. But then, perhaps as writer Larry Niven asserts, “privacy is just a passing fad.”

2 comments for “The New Industry of High-Tech Spying”