Former House Speaker Newt Gingrich and right-wing talk-show hosts are whipping up their supporters against Occupy Wall Street, while some Democrats support  the OWS goals but fear the backlash. However, poet Phil Rockstroh says this movement transcends traditional politics.

I’ve noticed a meme beginning to fester among liberal insiders who are positing that the Occupy Wall Street movement is starting to “distract” the citizenry from the wicked machinations of Republicans of the legislative class. Nonsense.

The OWS movement is not a distraction from, but serves as an alternative to, the disingenuous theatrics staged by the political hacks of this faux republic. Conversely, movement members have grasped that it is the hollow grandstanding the modus operandi of the present U.S. political system itself that serves as distraction from the realities of the day.

Those drawn to the OWS movement realize this: Vast sums of money are required to get the attention of and gain influence over the entrenched class of self-serving political insiders who hustle their wares in Washington, D.C. 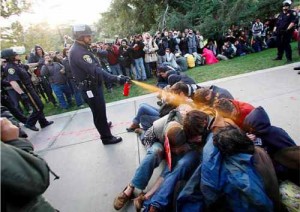 Year after year, election cycle after election cycle, Washington’s political class has revealed whose interests it serves. Accordingly, let the 1percent and their political operatives continue on their present myopic, self-serving, society-decimating course: By doing so, they will just bring more outraged people into the streets and hasten their own undoing.

Yet, because arrogant power, girded by duplicity and ruthlessly maintained, does not yield without a fight, we should expect more of the following: Stories are circulating that Clark, Lytle, Geduldig & Cranford, a well-connected Washington lobbying firm, with ties to the financial industry, have floated a $850,000 plan to pillory Occupy Wall Street.

This should not come as a surprise. Living in a society dominated by the power of massive corporations, and the inequitable wealth these self-perpetuating organizations have at their disposal, we will be relentlessly subjected to the narratives they generate.

Since birth, most of us have been enveloped by the consumer state’s commercial hologram.

Almost every daily act we perform and attitude we evince is in some measure determined by the dictates, demands and the incessant, commercial come-ons (the de facto propaganda) of the corporate state e.g. from what time you rise in the morning, to the food you eat, to what you clothe yourself in, to how you spend your days, to what time you go to sleep at night, to what stories you are audience to the cultural myths you have internalized by means of mass media saturation, to the manner you celebrate festivals and holidays, to how your illnesses and of those around you will play-out, even the circumstances of how you will approach and succumb to your death.

Because these are the waters in which we swim, most will accept societal and cultural circumstances as a given believing, for example, that when they posit a political utterance that the opinion expressed has been formed exclusively of their own mind, by the exercise of free will.

Accordingly, a large percent of the populace of the U.S. believes consumerism is a form of freedom that the exercise thereof mainly involves being at liberty to trundle to a mall and be in possession of the right to choose between a big-ass cookie or a giant Cinnabon that freedom of choice is expressed by over-priced running shoes or security can be found in a massive SUV.

In this manner, the propaganda campaigns of the corporate/national security state have proven effective at promoting and perpetuating the inequitable status quo in place at the present time. Do not underestimate the well-rewarded, professional con men employed in the criminal enterprise known as “public relations.”

Remember, these masters of deceit sell wars, which are fought by the poor and in which the underclass kill and die for the profits of a ruthless few. War is a money train for the rich and connected but a death wagon for the rest of humankind.

Ready yourself to be buffeted by a barrage of virtual reality blunderbuss volley after volley of mainstream media launched Big Lies and the ground fire of social media small distortions. Don’t walk unarmed into the line of fire.

Remember this: Most likely, the corporate state has, to some degree, colonized your mind, as it is well on its way to destroying the ecosystem of the entire planet.

Conversely, let your soul occupy you. While there might be an ongoing effort to scour Liberty Park of liberty, they cannot do likewise to your heart without your consent.

Turn the tables on them: Evict the corporate occupiers from the public realm within as all the while, you challenge propaganda whenever it crosses your path on the streets, at your workplace, at family gatherings, and on social media because a lie left unchallenged begins to be accepted as truth.

And worse, invades, colonizes and exploits (and often kills) a portion of the soul of the world. Importantly, do not underestimate the ruthless nature of calcified power. Regarding the subject: On Thursday, Nov. 17, near Foley Square, there was blood on Broadway.

At the scene, I witnessed thuggish, NYPD motorcycle cops driving directly into groups of peaceful demonstrators, with the intent of antagonizing those gathered, and when people stood their ground and refused to be bullied then phalanxes of blue-shirt bastards, swinging nightsticks, waded into the crowd.

Even with my wife, tugging at the back of my jacket, attempting to tow, as we say down south, my narrow ass away from the direction of injury or jail, I could not contain my outrage; I growled at a smirking cop, gloating over the carnage, “just keep it up, you mindless thug, when you get folks angry enough, the boot just might be on the other neck … namely yours.”

In hindsight, in my own defense: Being on scene and witnessing peaceful people attacked and brutalized, one is apt to become seized by rage. But what is the excuse for the mayor of New York City and his Police Commissioner?

Mayor Michael Bloomberg, Commissioner Raymond Kelly and the ranks of NYPD have proven themselves willing to barricade and checkpoint the city into chaos as opposed to enduring ongoing moments of freedom of assembly and free expression.

And this is why we must not retreat. Their tactics of repression are very expensive to the city budget, and money is the only thing they love. Hence, they have, in turn, provided us with a tactic we can use; we can hit them where they feel it. (Conversely, they can take blow after blow to their honor because they are devoid of that character trait.)

The ground is shifting below our feet and this phenomenon involves more than the echoing footfalls of marchers and the trudging of militarized formations of riot cops on city streets worldwide. The first vibrations, closer to tremors, transpired because the ground below us has been fracked of dreams … the void engendered seismological activity.

Now, from Cairo, Egypt’s Tahrir Square to Syntagma Square in Athens, Greece, to Liberty Park, in New York, New York, to Oscar Grant Park in Oakland, California, we have become like tuning forks, in sympatico with the resonances of the tormented earth.

Subsequently, the walls of the neoliberal prison are cracking We are no longer isolated, enclosed in our alienation, imprisoned by a concretized sense of powerlessness; daylight is beginning to pierce the darkness of our desolate cells.