Facts and the written word have long been enemies of injustice, as they are now with critiques that the economic game is rigged to concentrate money and power at the top. So, it was no surprise when the New York police raid on Occupy Wall Street trashed the “People’s Library,” Danny Schechter reports.

One of the clearest indicators of a fascist mentality is its contempt for oppositional ideas. The Nazis staged mass book burnings, and some U.S. religious zealots followed in their footsteps by burning rock and roll records they considered the “Devil’s Music.”

In 1992, the war on Sarajevo began with the burning of its world acclaimed library by rightwing nationalists who found the city too multi-cultural for their tastes,

In New York, our liberal but opportunistically Republican mayor, Michael Bloomberg, supports the New York Public Library. He also supported the right of that fanatic, fundamentalist minister Terry Jones, to burn the Quaran to protest Islam,

“I happen to think that it is distasteful. I don’t think he would like it if somebody burnt a book that in his religion he thinks is holy,” Bloomberg said a year ago, “But the First Amendment protects everybody, and you can’t say that we’re going to apply the First Amendment to only those cases where we are in agreement.”

So what does this self-styled upholder of the First Amendment say today after the New York Police Department, under his command, trashed The People’s Library at Liberty Plaza (Zuccotti Park), the base camp of the Occupy Wall Street Movement? So far, he’s said nothing! 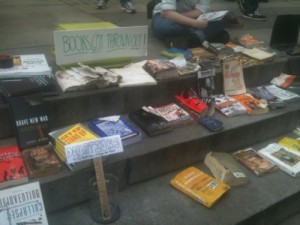 Amy Goodman was one of the few journalists who managed to get into the park while the police tore it apart, writing, “we saw a broken bookcase in one pile. Deeper in the park, I spotted a single book on the ground. It was marked ‘OWSL,’ for Occupy Wall Street Library, also known as the People’s Library, one of the key institutions that had sprung up in the organic democracy of the movement.

“By the latest count, it had accumulated 5,000 donated books. The one I found, amidst the debris of democracy that was being hauled off to the dump, was Brave New World Revisited, by Aldous Huxley.”

I was in the park this past Saturday with one of the People’s librarians. She pointed to one of only a handful of broken and waterlogged books that they recovered from the trash.

She also noted that a new pile of books had been donated since the forced and brutal eviction earlier in the week. Among them was Howard Zinn’s collection of voices from The People’s History of the United States.

Also, this weekend, the Library issued a new PDF version of its unique and impassioned anthology of poetry. Poets from all over the world are supporting the library, as the People’s library website explains:

“Poets from around the world have been sending poems to the People’s Library in an effort to create a living/breathing poetry anthology in solidarity with the Occupy Wall St. movement.

“All poems are accepted into the anthology. The anthology is updated on a weekly basis. If you’d like a poem added to the anthology email stephenjboyer@gmail.com and please include ‘occupy poetry’ in the subject.”

When I spoke with editor Stephen Boyer a week earlier, I commented that there was no introduction to the collection. He agreed it needed one, and honored me by inviting me to write it. It has now been integrated into the latest PDF.

Here’s part of it: “Poems Are The Ultimate Weapon Of The 99%”

“You see it here, dangling, in this book of Occupy poems, stuffed between improvised covers in a binder, virtually chained to a bookcase in the most improbable People’s Library ever created. It is a growing collection, tethered this way, because so many read it, contribute to it and want it.

“It is part of the amazing collection of the printed word, off the shelves of so many supporters and now sandwiched into a corner of a park housing an occupation to challenge the money state, based just two blocks away on the Street named after a Wall built centuries ago by slaves to hold back the Native Americans who were the first people displaced from this Island to make way for today’s overstuffed and over-bonused courtiers of commerce.

“Wall Street has long occupied America, but now, with passion and a high sense of purpose, Americans and friends from all over, occupy THEM, and among the non-violent weapons in an ever-expanding arsenal of anger, are words on the page, poems of every kind, written to tweak and challenge the power of their many purses.

“All movements need their poets to set the tone, to raise the questions and express the sensibility. And so it is true, I must confess, of OWS, where poetry lives in the hearts of this encampment of the engage, on this half-acre of enraged souls who have assembled to take a stand, to fight the power, and to build a community of the dispossessed and discontented in search of real democracy.

“There may be rage in this Park but also love and commitment without end. We are here also in the memory of poets who have come before, like Brooklyn’s Walt Whitman whose poems and action echoed those who fought for the union to conquer slavery.

“Whitman once said: ‘To have great poetry there must be great audiences, too,’ And Occupy Wall Street is a great audience with poetry readings every week along with the mic checks and the militancy.

“Also, let’s not forget the beats like Allen Ginsberg who lived in Lower East Side New York, and whose life and work was a testament to the duty of the poet to provoke and inform, to fuse poesy and politics. Allen is here in spirit as are so many other New Yorkers of the word who powered movements in years gone by and feel so uplifted by this one.”

The People’s Library emerged in a city that is cutting back on the hours its libraries are open, a town which has also seen the recent closures of major bookstores including a Borders right up the block because of failures in their Wall Street-driven speculative financing and expansion plans. Their own debts brought them down.

Just as Mayor Bloomberg and his gendarmerie can’t evict an idea, the People’s Library will not be burned and only get stronger.

In fact, occupiers continue to turn their slogans into poems, like this one hurled at cops hidden behind plastic face masks: “Take Off Your Riot Gear. There’s No Riot Here!”

News Dissector Danny Schechter covers the OWS movement daily on his Newsdissector.com blog and for AlJazeera and other leading websites. He hosts News Dissector Radio for Progressive Radio Network (PRN.Fm) He recently produced a TV report on the occupation, online at: http://www.youtube.com/user/PressTVGlobalNews#p/u/9/cohBX_HMoz8” Comments to dissector@mediachannel.org

← Israeli Democracy Fades Toward Black
Holiday Books for Only $2 Apiece →

6 comments for “The Trashing of the People’s Library”