America’s Founders understood that creating a nation that favored one religion over others was a recipe for repression. Israel’s founders rejected that wisdom and sought a Jewish state with democratic ideals. But it is turning out that America’s Founders were right, as Lawrence Davidson explains.

Have you seen those old-time movies notable for their predictable endings? The cowboy is seen riding into the sunset or the lovers are reunited, etc. And then comes the end – the screen dramatically fades to black.

Most of these movies are pretty bad. The stories are trite, the acting melodramatic and directing inept. Well, this genre seems to be making a comeback, but off the screen rather than on it. In this revival, the Israelis are leading the way albeit with an ending that is as sad as it was predictable.

Israel’s bad movie starts out as an historical drama with moral overtones. It’s the story of Israeli democracy but, unfortunately, it has an illogical and misguided premise. It begins with the notion that you can have a religiously exclusive democracy with a multi-religious population. Under these circumstances, the drama quickly turns to tragedy.

The final act of this tragedy appears to be playing itself out before our eyes. It opened in 2009 with the second term of Prime Minister Benjamin Netanyahu, a hard-line “Likudnik” determined to expand Israel to the Jordan River. That makes him an ally and supporter of the settler fanatics who represent today’s version of Zionist fascists.

There is a correlation between the condition of Israeli democracy and the ambitions of Netanyahu’s allies. As the settlements expand, Israeli democracy shrinks. This in turn is tied into the fact that the prime minister is determined to keep greater Israel demographically Jewish, and this means expansion must be coupled with ethnic cleansing.

One can see this clearly in present Israeli policies in East Jerusalem as well as the violent harassment of Palestinians by settler thugs throughout the West Bank. Following logically from the flawed premise in the original script, this is a perfectly predictable ending for the story of modern Israel.

The drama now turning into tragedy has its peculiarly Jewish subplots. There have always been multiple expressions of Judaism. One has been the East European insular version born of acute persecution. This version expressed an inward tribal orientation that assigned the role of real or potential anti-Semites to all those who are non-Jews.

Then there was the pre-1967 American version. This one was outward looking and held in high esteem the general principles of tolerance. Here the reasoning was that, as a minority, Jews were safest in a world where tolerance was a universal virtue. In Israel/Palestine, it was the East Europeans who shaped the outlook of most Jewish citizens.

That paranoid outlook is certainly the one held by Netanyahu, but he inherited it from others of East European origin. He and his supporters are the heirs of Vladimir Jabotinsky, a Russian-born militant Zionist who died in 1940, and Menachem Begin, Israel’s first Likud prime minister who died in 1992. 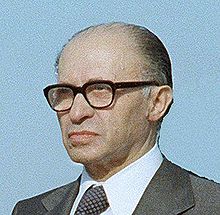 This is not to say that Israel’s Labor Party heritage was not also insular and expansionist. After all David Ben Gurion was from Russian-controlled Poland. The differences between the two groups are quantitative and not qualitative.

However, it is Netanyahu and his coalition who control the Israeli government. They rule in the Knesset. And they are using their power to destroy not only the Palestinians but also those Israeli Jews who would defend the bygone American version of tolerant Judaism.

One can only imagine that Netanyahu and his fanatics look upon these other Jews, who would make their peace with the Palestinians, as the Bolshevik fanatics once looked upon the Kronstadt sailors. They ultimately see them as dangerous traitors.

Just in the past few weeks the Knesset has spat out a number of bills aimed at restricting the voices of Jewish opponents and to make it more difficult for them to secure appointed offices. Part of a continuing line of similar legislation, these new potential laws represent scenes in the final act of this tragedy. Here are some highlights:

—A bill to “ban political organizations in Israel from receiving donations of more than $5,000 from foreign governments and other international groups.” Peace groups such as Peace Now and human rights organizations such as B’Tselem, as well as others which are normally critical of the Israeli government would lose much of their funding under the new law.

—Another bill in the pipeline would then tax at 45 percent all remaining income from foreign governments. Put together the two bills will have a “staggering” impact.

Yet, it will come as no surprise that individual donors, such as wealthy right-wing Zionists who give millions of tax-free dollars to sustain the settler movement, are exempt from the new laws.

As noted, there are other laws as well that are causing concern. It is now a criminal offense in Israel to advocate a boycott of the country and its illegal settlements, or to mark the occurrence of the Nakba, the Arabic term for the “day of catastrophe” when Israel declared its independence in 1948.

There also are bills pending that would make it easier to pack the Israeli supreme court with rightists and even to punish media outlets that dare to investigate the prime minister or his wife. Thus does Israeli democracy fade to black.

The argument on the part of the Netanyahu forces is that the money coming from foreign governments and organizations represents “meddling” in the internal affairs of Israel. Well, the Israeli establishment should certainly know meddling when they see it. Their politicians and agents are no doubt the world’s experts at meddling in the affairs of other countries, particularly the United States.

In the United States, through the manipulation of large cash donations, Israeli leaders meddle away to their heart’s content, to the predicable detriment of U.S. national interests in the Middle East. Simultaneously, these same Israeli politicians see no problem in receiving a minimum of $3 billion a year from the foreign government in Washington.

These new laws have a lot of Israelis upset, and not just those who are going to be directly impacted. The official opposition in Israel, the Kadima Party (ambitiously translated as the “forward” party) has suddenly taken it upon itself to warn the nation that democracy is in danger.

Tzipi Livni, former foreign minister and now leader of the opposition (also rather infamous for her part in the “Cast Lead” invasion of Gaza), said, “this is an attempt to turn Israel into a dark … dictatorship.” The ceremonial president of Israel, Shimon Peres, has declared that “these proposals deviate from the basis of democracy.”

Of course, there is a good bit of hypocrisy in these protests. These dissenters never were known for exercising their consciences over the suppression of the democratic rights of non-Jews. Nevertheless, the targeting of the rights of Jews, even tolerant ones, is “beyond the pale.”

But that is what you get when you deny the rights of others. Sooner or later the process comes full circle and those in the in-crowd lose their rights too.

When the screen fades to black all that will be left of Israeli democracy is a facade, a democracy in name only. For many, however, that will be sufficient. It will certainly be sufficient for the Israeli politicians who, living wholly within their Zionist ideology, prize its commandments above all else.

And it will suffice for the lobbyists and propagandists who must manage the image of the Zionist state so that those Americans who give money and ensure pro-Israeli policies can maintain the fantasy that Israel is “just like us.”

And finally, it will no doubt suffice for American Jewish congregants who do not want to be ostracized from synagogues run by businessmen whose only connection to “their people” comes from blindly supporting Israel.

Will it suffice for the rest of us? Hopefully not.

Perhaps as the last act of this bad movie plays out, many other reviews will come forth criticizing the media image of Israel as fraudulent, the product of half-truths running on to lies.

That might take a bit of lobbying on the part of those who see this movie as a real disservice not only to Palestinians, but also to Jews. But take heart and remember what Will Rogers once said, “there is only one thing that can kill [bad] movies and that’s education.”