The much-touted report by U.N. weapons inspectors on Iran’s alleged pursuit of a nuclear bomb contained little that was new, much that was dated, and nothing that could be independently confirmed. But, as Paul R. Pillar, a former top CIA analyst, notes, it still had a big impact.

The report on Iran that the International Atomic Energy Agency released this week had been awaited with bated breath, with much pre-spinning of the substance. But the breath was at least as much baited as bated.

Despite references in the surge of report commentary about new evidence on this or that aspect of the subject, the report told us nothing of importance to policy on Iran that was not already well known. The voluminous commentary has consisted chiefly of people saying what they had intended to say on the topic all along, with the report being just the latest peg on which to hang such talk.

This week’s surge in comments about the Iranian program is another step in a long-running process that seems destined to push U.S. policy toward a disastrous conclusion. It is a process of talking up Iran and specifically the nuclear program as if there were no greater danger to Western civilization as we know it. 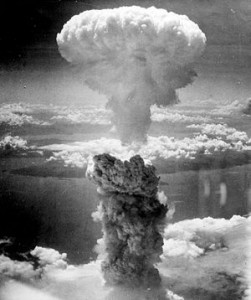 The mushroom cloud from the U.S. A-bomb dropped on Nagasaki, Japan, during World War II

When this theme is voiced often enough, loudly enough, by enough people, it becomes a received wisdom that is accepted automatically with no effort to determine whether it is true. That in turn leads to the notion, also widely and automatically accepted, that an Iranian nuclear weapon must be prevented at all costs, with no effort to add up the costs.

Commentary such as that heard this week entrenches the further theme that Iran is on an inexorable march toward building a nuclear weapon, with no consideration to all the influences, many of which are in the control of the United States, that will help to determine whether or not Tehran ever takes that step.

As the discourse about the Iranian nuclear program moves through still more chapters, with the IAEA report being the occasion for the latest chapter, the very length of the discourse fosters the impression that all manner of means have been tried to deal with the perceived problem that the program represents.

The impression lingers even though there are wide diplomatic avenues that have never been explored. So we get patently false remarks such as one from Mark Dubowitz of the Foundation for the Defense of Democracy that “no one can reasonably argue that countries threatened by Iran have not tried all peaceful alternatives.”

This whole process treats a policy question such as “what should be the U.S. posture toward Iran?” as if it is to be equated with an empirical question such as “is Iran working to make a nuclear weapon?” This is not the first time this mistake has been made.

In the selling of the Iraq War, the Bush administration hammered so relentlessly into the public consciousness the theme of Iraqi weapons of mass destruction that many people never stopped to notice that a presumed Iraqi unconventional weapons program, even if entirely real, simply did not equate with a case to launch an offensive war.

American politics, especially amid a presidential-election campaign, exacerbate these unfortunate tendencies. We see it most obviously in Republican presidential candidates falling over each other in an effort to declare their love for Israel and their toughness on Iran.

The latest round in the national discourse about Iran contains several gaping holes, the biggest of which is any serious and careful consideration of what danger an Iranian nuclear weapon actually would pose. The closest things to a serious effort to posit such a danger ultimately come up short.

The direction the discourse has taken has meant that any questioning of this supposedly grave danger is already outside the mainstream. But being in the mainstream does not make something valid.

[For more on the IAEA report, see Consortiumnews.com’s “Iran’s Soviet Bomb-Maker Who Wasn’t” and “DÃ©jÃ  Vu Over Iran’s A-Bomb Charges.”]