In the new Iranian nuclear-bomb allegations, the most sensational charge was that a former Soviet nuclear weapons expert spent years tutoring Iranian scientists, but it turns out the Ukrainian was a specialist in commercial nanodiamonds, not A-bombs, reports Gareth Porter.

The report of the International Atomic Energy Agency (IAEA) published by a Washington think tank Tuesday repeated the sensational claim previously reported by news media all over the world that a former Soviet nuclear weapons scientist had helped Iran construct a detonation system that could be used for a nuclear weapon.

But it turns out that the foreign expert, who is not named in the IAEA report but was identified in news reports as Vyacheslav Danilenko, is not a nuclear weapons scientist but one of the top specialists in the world in the production of nanodiamonds by explosives. 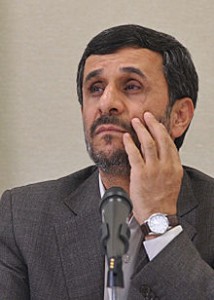 In fact, Danilenko, a Ukrainian, has worked solely on nanodiamonds from the beginning of his research career and is considered one of the pioneers in the development of nanodiamond technology, as published scientific papers confirm. (Nanodiamonds have widespread commercial applications in manufacturing and in medicine.)

It now appears that the IAEA and David Albright, the director of the International Institute for Science and Security in Washington, who was the source of the news reports about Danilenko, never bothered to check the accuracy of the original claim by an unnamed “Member State” on which the IAEA based its assertion about his nuclear weapons background.

Albright gave a “private briefing” for “intelligence professionals” last week, in which he named Danilenko as the foreign expert who had been contracted by Iran’s Physics Research Centre in the mid-1990s and
identified him as a “former Soviet nuclear scientist,” according to a story by Joby Warrick of the Washington Post on Nov. 5. The Danilenko story then went worldwide. [For more on Albright, see Consortiumnews.com’s “An Iraq-WMD Replay on Iran.”]

The IAEA report says the agency has “strong indications” that Iran’s development of a “high explosions initiation system,” which it has described as an “implosion system” for a nuclear weapon, was “assisted
by the work of a foreign expert who was not only knowledgeable on these technologies, but who, a Member State has informed the Agency, worked for much of his career in the nuclear weapon program of the country of his origin.”

The report offers no other evidence of Danilenko’s involvement in the development of an initiation system.

The member state obviously learned that Danilenko had worked during the Soviet period at the All-Russian Scientific Research Institute of Technical Physics in Snezhinsk, Russia, which was well known for its work on development of nuclear warheads and simply assumed that he had been involved in that work.

However, further research would have revealed that Danilenko worked from the beginning of his career in a part of the Institute that specialized in the synthesis of diamonds. Danilenko wrote in an account of the early work in the field published in 2006 that he was among the scientists in the “gas dynamics group” at the Institute who were “the first to start studies on diamond synthesis in 1960.”

Danilenko’s recollections of the early period of his career are in a chapter of the book, Ultrananocrystalline Diamond: Synthesis, Properties and Applications edited by Olga A. Shenderova and Dieter M. Gruen, published in 2006.

Another chapter in the book covering the history of Russian patents related to nanodiamonds documents the fact that Danilenko’s centrt at the Institute developed key processes as early as 1963-66 that were later used at major “detonation nanodiamond” production centers.

Danilenko left the Institute in 1989 and joined the Institute of Materials Science Problems in Ukraine, according to the authors of that chapter.

Danilenko’s major accomplishment, according to the authors, has been the development of a large-scale technology for producing ultradispersed diamonds, a particular application of nanodiamonds. The technology, which was later implemented by the “ALIT” company in Zhitomir, Ukraine, is based on an explosion chamber 100 square meters in volume, which Danilenko designed.

Beginning in 1993, Danilenko was a principal in a company called “Nanogroup” which was established initially in the Ukraine but is now based in Prague. The company’s website boasts that it has “the strongest team of scientists” which had been involved in the “introduction of nanodiamonds in 1960 and the first commercial applications of nanodiamonds in 2000.”

The declared aim of the company is to supply worldwide demand for nanodiamonds.

Iran has an aggressive program to develop its nanotechnology sector, and it includes as one major focus nanodiamonds, as blogger Moon of Alabama has pointed out. That blog was the first source to call attention to Danilenko’s nanodiamond background.

Danilenko clearly explained that the purpose of his work in Iran was to help the development of a nanodiamond industry in the country.

The IAEA report states that the “foreign expert” was in Iran from 1996 to about 2002, “ostensibly to assist in the development of a facility and techniques for making ultra dispersed diamonds (UDDs) or nanodiamonds” That wording suggests that nanodiamonds were merely a cover for his real purpose in Iran.

The report says the expert “also lectured on explosive physics and its applications”, without providing any further detail about what applications were involved.

The fact that the IAEA and Albright were made aware of Danilenko’s nanodiamond work in Iran before embracing the “former Soviet nuclear weapons specialist” story makes their failure to make any independent inquiry into his background even more revealing.

The tale of a Russian nuclear weapons scientist helping construct an “implosion system” for a nuclear weapon is the most recent iteration of a theme that the IAEA introduced in its May 2008 report, which
mentioned a five-page document describing experimentation with a “complex multipoint initiation system to detonate a substantial amount of high explosives in hemispherical geometry” and to monitor the
detonation.

Iran acknowledged using “exploding bridge wire” detonators such as those mentioned in that document for conventional military and civilian applications. But it denounced the document, along with the others in the “alleged studies” collection purporting to be from an Iranian nuclear weapons research program, as fakes.

Careful examination of the “alleged studies” documents has revealed inconsistencies and other anomalies that give evidence of fraud. But the IAEA, the United States and its allies in the IAEA continue to treat the documents as though there were no question about their authenticity.

The unnamed member state that informed the agency about Danilenko’s alleged experience as a Soviet nuclear weapons scientist is almost certainly Israel, which has been the source of virtually all the purported intelligence on Iranian work on nuclear weapons over the past decade.

(Israel is a United Nations “member” state, although it has refused to sign the Nuclear Nonproliferation Treaty and thus does not subject its secret nuclear weapons arsenal to IAEA supervision. Iran did sign the treaty and does grant IAEA inspectors some access to its nuclear-related facilities, which Iran insists are for peaceful purposes only.)

Israel has made no secret of its determination to influence world opinion on the Iranian nuclear program by disseminating information to governments and news media, including purported Iran government
documents. Israeli foreign ministry and intelligence officials told journalists Douglas Frantz and Catherine Collins about the special unit of Mossad dedicated to that task at the very time the allegedly fraudulent documents were being produced.

In an interview in September 2008, Albright said Olli Heinonen, then deputy director for safeguards at the IAEA, had told him that a document from a member state had convinced him that the “alleged studies” documents were genuine. Albright said the state was “probably Israel.”

The Jerusalem Post’s Yaakov Katz reported Wednesday that Israeli intelligence agencies had “provided critical information used in the report,” the purpose of which was to “push through a new regime of
sanctions against Tehran.”

Gareth Porter is an investigative historian and journalist specializing in U.S. national security policy. The paperback edition of his latest book, Perils of Dominance: Imbalance of Power and the
Road to War in Vietnam, was published in 2006. [This article was first published by Inter Press Service.]