History is filled with cautionary tales about militarily powerful empires that collapsed because they spent far too much on guns over butter. The United States is now tempting a similar fate behind a ruling elite that uses fear and propaganda to maintain control, as Gary G. Kohls notes.

Years ago I read a newspaper story about an elderly man, a loner, who lived in an impoverished area of Cleveland. Neighbors had noticed his mail piling up on his porch. When they received no responses to phone calls or to knocks on the door, they called the police, who broke into the man’s house. What they found is an allegory for our time

The withered old man was dead in his bed, surrounded by rifles, pistols and guns of every description. Boxes of bullets and cartridges were stacked on the floor. He had a knife in his cold, dead hand and an actual harpoon was leaning against his refrigerator, which was empty.

In a nation of plenty and with grocery stores in the man’s neighborhood, he had starved to death.

He had fiercely upheld his Second Amendment rights but had ignored his health. He had apparently heard the National Rifle Association’s sermons about defending one’s property against trespassers – by lethal means if necessary – but he died, alone and friendless.

He had wasted away, in a paranoid state, while “defending” himself against “the other,” who never did come to rob him. He had spent all of his money his Social Security checks, his pension, everything on guns and ammunition, but he had spent nothing on food or life-giving activities. He was afraid of burglars and thieves and had developed an obsessive fear that had cost him his life.

And, what was perhaps a more tragic reality, he had been suspicious of his neighbors who probably were keeping their distance from that crazy and scary old man who had all the guns in his house.

For Americans, our paranoid, militarized and heavily armed nation doesn’t seem to be capable of learning the lessons that is obvious from that story.

Mutual fear of “the other” caused the two superpowers and their allies to spend obscene amounts of money on inedible weapons systems. The training of tens of millions of “kill or be killed” warriors (ultimately depriving many of them of their physical and mental health for the rest of their lives) drastically weakened the moral integrity of the nation as well, all in the name of “national security.”

Contrary to what patriotic believers in American exceptionalism want us to believe, a nation can’t afford, for very long, both guns and butter.

During the Cold War, the saber-rattling superpowers each spent/wasted an irretrievable $12 trillion dollars. In the case of the U.S., this spending was done mostly with borrowed money that accrued handsome interest rate repayments that went mainly to wealthy investors, and which are still not even close to being paid off!

America spent trillions of dollars on: recruiting, training and retaining troops; researching, developing and producing costly weapons systems; maintaining hundreds of budget-busting military bases in both friendly fascist states as well as democracies, all the while virtually ignoring the growing numbers of impoverished and under-privileged people and oppressed minorities who helplessly watched their health, savings, civil rights, jobs and food security disappear.

America has been ruled by a powerful insider group of over-privileged, body-guarded, and indifferent Wall Street elites who live in gated communities and are the 1 percent fingered by the Occupy Wall Street movement. That 1 percent has been responsible for what is destined to become the Great American Depression of the 21st Century.

The nefarious group that is responsible for the crash has, with its ill-gotten gains, managed to buy and pay for most of our politicians (and even our judges), who are now faithfully serving that 1 percent by helping to implement the ubiquitous neo-fascist agendas in right-wing statehouses around the nation.

Most of our elected pro-corporate state and national political leaders (including five of our nine Supreme Court justices) are serving that ungodly agenda. These traitors to true democracy only preach fiscal responsibility when the bottom lines of their paymasters are at risk, but they never seem to do it when those of us in the lower 99 are in crisis.

The moneyed ruling class, with its large fortunes and its casino capitalism to protect, has conveniently forgotten that it was the Reaganomics-inspired, profligate borrowing and spending (the propaganda trick called trickle-down economics) that sky-rocketed the national debt to unmanageable levels.

The debt crises that followed were only met by more borrowing, raising the debt ceiling and cutting the spending on programs of social uplift, while never questioning the obscene budget requests from the Pentagon. These budget requests were, year after year, invariably approved by large majorities of our chicken-hearted legislators in the dark of night, after the limited scrutiny of the daily news cycle had passed.

And now, predictably, the chickens (in more than one sense of the phrase) have come home to roost.

Strongly deluded that there is “glory” in war and trusting in blank-check borrowing and spending on weaponry, America has spawned tens of millions of sick, hungry, homeless, under-employed, under-educated, addicted, psychologically-traumatized and impoverished people, many of whom are conveniently hidden in inner cities that the out-of-touch elite policy-makers never see.

Universal health care, which large majorities of the population desire, is habitually rejected by the powers-that-be in the medical, pharmaceutical and insurance industries.

After all, the politicians that have been financed by such industries have great health insurance and health care themselves. So why would greedy power-mongers want to have their taxes go to help those that are sick, poor and hungry? (For that matter why should the 1 percent want to pay taxes that support public libraries and parks when they themselves have personal libraries and private playgrounds? Let the average folk eat grass.)

But America’s rapidly deteriorating infrastructure can’t and won’t be fixed while bloated and wasteful military budgets go unopposed in Congress. You can’t afford both guns and butter!

If readers are seeing cuts to the programs that make life worth living, understand that much of the responsibility lies in the massive Pentagon borrowing and spending that has gone on every year since the Vietnam war, with massive increases in spending on nuclear weaponry during the late, lamented Reagan/Bush administrations.

What is the eventual outcome of putting basic human needs last? Poor mental and physical health, poor educational opportunities, a poorly trained workforce, hopelessness, suicidal tendencies, addictive behaviors, drug use, domestic abuse, street gangs, prostitution, violence, ignorance, malnutrition, desperation, crushing poverty and, inevitably, anger at a system of government and corporate control that neglects its people and then shows no signs of remorse for having done so.

It shouldn’t surprise us that the Occupy Wall Street and Arab Spring movements have, at long last, emerged. The despair and desperation behind these movements (summarized in the preceding paragraph) are what the mainstream news media and the talking-head “experts” pretend not to understand. 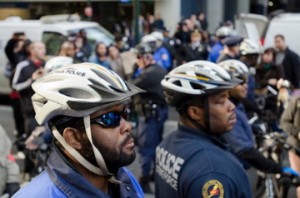 Are average Americans going to continue to allow themselves to be perpetually and increasingly sickened and impoverished while blindly and patriotically cheering an unaffordable “we’re number one” military-superpower status?

Are we going to continue to waste scarce resources on bankrupting wars and military occupations world-wide while ignoring investments that would foster a sustainable peace, a sustainable economy and a sustainable planet?

Are the weapons-makers, the Pentagon, the CIA, the FBI and the dozens of other intelligence agencies in reality expensive make-work jobs programs that enrich and protect the wealthy war-profiteers at the expense of the poor? When one adds in all the “black box” budgets of the intelligence agencies, one wonders if the United States has a military or if the military has a nation.

Are we going to continue fearing the wrath of the 800-pound gorillas of the 1 percent that intimidate and threaten us into silence? Or are we going to courageously organize and band together to demand justice from the ones who are withholding it from those of us in the lower 99?

Is It Too Late?

The unchecked spending of taxpayer money on the biggest and most bloated of the gorillas – the military/industrial/congressional/media/investor-class complex – which has flourished since World War II, has finally been proven to be disastrous for non-wealthy Americans.

That complex has orchestrated the extinction of small-family farms and small businesses while creating the heartless multinational corporations that try to pay slave wages. That complex has been behind the “fouling of the nest” (the poisoned, exploited environment) with tens of thousands of lethal and cancer-causing industrial pollutants, radioactive waste disposal sites and toxic military dumpsites that are poisoning the water, soil and air.

Unsustainable levels of borrowing by powerful corporations and government entities have created obscene levels of debt and obscene disparities in wealth between the haves and have-nots.

Unsustainable levels of personal credit-card debt and home-mortgage debt among the 99 percent, who were tempted by predatory lenders to imitate the actions of the 1 percent at the top, have resulted in an epidemic of under-employment, home-mortgage foreclosures and personal bankruptcies.

Although it might already be too late, the lower 99 may finally be waking up and trying to reverse the orchestrated descent toward total economic collapse, at which time the 1 percent, with their fortunes undepleted, will snap up everything they can afford at fire-sale prices.

Being armed to the teeth and universally feared and hated (because America’s exploitative bullying behavior around the world) is not a sustainable path to security. Rather, we are destined to be pariahs as we sink into moral, spiritual, physical and brain malnourishment.

Because of America’s misbegotten over-spending on inedible weapons systems and its bullying behavior that is victimizing billions of people, we will soon have nobody who will be interested in rescuing us from our self-imposed, suicidal path towards collapse.

Americans cannot continue to delude themselves by thinking that they can afford both butter and guns. America cannot have refrigerators that are well-stocked with nutritious food and also be armed to the teeth. It must reject one and embrace the other.

Gary G. Kohls is a retired physician who practiced holistic mental health care. Dr. Kohls feels is it his professional duty to warn others of the dangers to mental and physical health that are inherent in the participation of violence, especially military violence.

← An Iraq-WMD Replay on Iran?
Who Is Judge Richard Leon? →

33 comments for “When Guns Defeat Butter”