The Western powers achieved violent “regime change” in Libya under cover of a UN resolution to “protect civilians” and by relying mostly on air power to isolate and then kill Muammar Gaddafi and doing it all at a much lower price than the Iraq War. But Ivan Eland sees dangers in this “victory.”

NATO’s “victory” in Libya has sown many seeds of possible future calamity. But none is fraught with as much danger as providing a new “war on the cheap” model for Western nations that have fallen on hard economic times.

Although a very real chance of civil war, tribal conflict or an Islamist state in Libya still exists, many times, revolutions morph into indistinguishable and horrible end states, for example, the French and Russian revolutions, that possibility may not be the worst outcome. 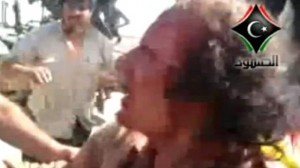 Amateur video image of Muammar Gaddafi shortly before his death

And all of those missing shoulder-fired anti-aircraft weapons and other armaments from Libyan munitions stockpiles could be given or sold to terrorists, thus creating one of the most hazardous threats in civil aviation’s history.

Although any of these developments would be bad, even worse might be the use of the Libya model to oust other tyrants or governments who have policies that the United States doesn’t like.

This model for winning wars on the cheap was originally developed by the United States during the Balkan wars in the 1990s after the ignominious withdrawal of American ground forces from the mini-quagmire in Somalia.

In the wars over Bosnia and Kosovo, local forces were used on the ground to hold the enemy in place while allied air power pummeled opponents into capitulation. The same model was used in Libya.

And the new model of war arrived just in time for the West! U.S. quagmires in Vietnam, Iraq and Afghanistan and the Soviet debacle in Afghanistan had shown weaker opponents how to beat superpowers. Guerrilla warfare over the long haul can sap the strength and patience of even the most potent great power.

As Bill Clinton learned in Somalia and George W. Bush and Barack Obama had to relearn in Iraq and Afghanistan, inserting large numbers of American ground forces nowadays rarely leads to a short and bloodless victory.

In contrast, the new manned air power/drone-heavy approach has defeated enemies within a few months. And air and drone strikes are much cheaper than putting large forces on the ground.

Although tainted by being associated with its much maligned chief proponent, then-Secretary of Defense Donald Rumsfeld, the concept of using ground forces to support air forces, rather than the more traditional opposite arrangement, is probably the correct way to fight future major wars, as long as Western forces don’t linger to occupy and remodel the country, which requires many more boots on the ground.

The technology from the air has clearly become dominant in warfare. Yet using the model in small, non-strategic wars, such as Bosnia, Kosovo and Libya, does not mitigate the potentially dangerous outcomes from these brushfire wars.

In other words, even if the United States makes weak opponents capitulate in such small wars, what has it really won? Clearly only the responsibility of ensuring that the target country doesn’t revert to future chaos, civil war or dictatorship.

Already neoconservatives and other interventionists are clamoring to use the drone/air power model in Syria to get rid of President Bashar al-Assad, who has used force to attempt to put down a resilient Arab Spring protest movement.

Eyeing the results in Libya, the Somalis and their Kenyan occupiers are requesting NATO intervention, and the United States already conducts drone strikes within the country against the Shabab Islamist militants. Thus, Somalia is ripe for the use of the model.

In the future, seeing the “success” of the model and hoping to cash in on the American desire to remake the world in its own image, other countries and liberation movements will likely call for similar Western interventions.

Yet even if the United States agrees to the model’s use in Syria and Somalia, such interventions will merely destabilize the Middle East and East African regions further. Also, with a yawning budget deficit and more than $14 trillion in national debt, even wars on the cheap are now too expensive for the United States.

The U.S. defense budget has to be cut dramatically. Even entering brushfire conflicts from the air should be a nonstarter.

← Looming Crisis of Climate Chaos
An Iraq-WMD Replay on Iran? →

2 comments for “The Risk of the ‘Cheap’ Libya Victory”