Occupy Wall Street has succeeded far beyond its early dreams, but the protests face challenges, from the coming winter to troublemakers acting to discredit the movement. But Danny Schechter notes that changing a well-entrenched status quo is never easy.

The tarps are flapping and the tents are not bringing much warmth. Harsh winter-like winds are lashing the encampment at Zuccotti Park, or as many would prefer. “Liberty Plaza,” the symbol of a wannabe revolution against the status quo and the power-crats of the American oligarchy.

The hard real-world contradictions of urban life have bumped up against the idyllic hopes of the occupiers as all the urban crises that our society has ignored and neglected surface in that half acre of hope. 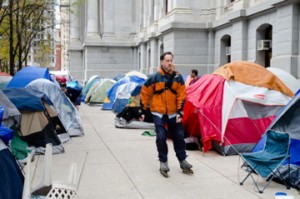 There are man (and woman) handlers and gladhanders, doers and dopers, ragers and even rapists and many poor with nowhere else to go. There are cops on the outside (and some inside) who plan for and hope for the worst.

This fight is not just the 99 percent against the 1 percent because, truth be told, this movement has so far only motivated a minority of the conscious and has yet to reach a majority of the beleaguered and oppressed.

When I joined a march last Saturday, one occupier seemed to recognize this reality with a home-made sign, that read “I am part of the 1% of the 99 % that is protesting, Where are the rest of us?”

Polls showing broad public support are not enough. Public opinion can be fickle and easily manipulated. True, some unions are reaching out to the Occupy Movement but they are at their lowest point in a century. They are fighting for survival.

JA Myerson writes on the new, must read OWSNews.org website that many are preparing to evacuate the park in this winter of growing discontent as the lines between those who want change and those who don’t become clearer.

“For the last week or so, the 1%-owned media have been doing everything possible to give their fellow 1%-er and good friend Mayor [Michael] Bloomberg the political cover necessary to seize Zuccotti Park. They have made an example of a restaurant whose business is suffering because of barricades but who put up the barricades?

“And now that they have cultivated the image of a failed project (after themselves erecting the barriers to its success), they appear to be gearing up to demolish it.”

That could happen because revolutions don’t run in straight lines and don’t happen only when those most aware among us want them too. The occupiers have the sympathy, but a company called Brookfield owns the property in a society where property rights trump human rights. There are rumors that a new location is being considered.

Revolutions happen when social and economic conditions insure they are unstoppable, when the crisis makes millions understand not only their inevitability but their desirability, and when many forces converge and see no alternative.

It’s one thing to call a “general strike,” but mounting one requires more than staging a mass protest in one city for one day after less than a week of mobilizing. Yes, the turnout in Oakland was impressive, but it could not be sustained.

As Noam Chomsky advised before it happened, “you have to educate educate yourself and others before you strike.”

The violence of a few was used to discredit the efforts of the many, prompting as many criticisms from within as from without. Why does a macho handful always feel the need to prove how militant they can be?

There are no shortcuts to building a deeper and broader movement. Organizing is not easy but is always essential. Being right is never enough!

The Italian theorist Gramsci advised revolutionaries a century ago to fuse “pessimism of the intelligence and the optimism of the will.” He was right about that then and is right now.

A group of Democrats in Lower Manhattan looked for some historical lessons, warning: “Revolutionary pretensions can be dangerous. They threaten the status quo, suggest instability, and often threaten and provoke real violence.

“America, like it or not, has a stable and venerable system of government which yields ceaseless peaceful transfers of power, and is in actual fact fairly responsive to voter sentiment, despite even the most level-headed criticisms made over the issues of inaction and corruption. Isolated incidents and injustices aside, our civil servants are professional and disciplined.”

While this may have been once true, that system is cracking under the weight of cynicism, polarization, and corruption. The polls show Congress enjoys record lows of public support. So does President Obama and, in fact, his Republican challengers.

This does not mean the country is ready to scrap the system but is a sign of growing dissatisfaction. While some us have become intensely politicized, others are tuning out, taking refuge in the distractions of consumerism, entertainment and sports.

While the financial industry is the main enemy, it is allied with, and finances, a media industry that specializes in obscuring issues and propagandizing 24/7. It is a master of withholding important information and ridiculing dissidents while it boosts war and promotes passivity.

We have to get beyond our own self-righteousness and hear our critics, not just among the buffoons of the Right who are the easiest to refute  and dismiss.

We have to study the long history of failed attempts to turn our country around and learn from it. We have to acknowledge our mistakes as well. This generation of activists is not the first to take on the status quo.

Revolutionary zeal may be driving many but can also drive them to disillusion and despair in a society focused on instant remedies like Alka Seltzer. We are a generation that wants everything, and wants it NOW! We may have speed-dating but not speed social transformations and political revolutions.

Today’s occupations are not the first either.  The Democrats whom I referenced before looked to an earlier moment in our own revolution’s history: #OccupyValleyForge. True, that was a war, not a movement, but its methods deserve scrutiny.

As I have just learned, “they brought in what were known as Regimental Camp Followers, women and children, basically, relatives and families of enlisted men. They built structures, erected defenses, and two more things. They worked out an alliance with France, and they basically made the Continental Army out of their troops at Valley Forge.

“They did this with the help of Baron Friedrich Wilhelm von Steuben, who had been, dare I say, a community organizer type for the Prussian military  community. The Continental Army was built through shared hardship and struggle, with excruciating drilling and training, and they were provided with ample moral support in the form of the Regimental Camp Followers.”

History never repeats itself. The bearded oracle once said that when it does, the second time is farce. We have to prepare for the possibility that Occupied Wall Street will take new forms, and may have to spread out and decentralize as is already happening with meetings in public atriums and church yards.

It has already outgrown one park and spread through the world. It has, to its credit, brought issues like economic inequality and Wall Street crime into the national conversation. It has so far succeeded beyond its greatest hopes.

It is revolutionary in its very leaderless small “d” democratic being, but it has not yet made a revolution.  No surprise there! There is quite a way to go.

The battle with the oligarchy as symbolized by the greedsters and fraudsters on Wall Street will go on, with or without a park, as a form of non-violent guerrilla-style class warfare, always bearing in mind,  that moral power can defeat physical power when it is creative, courageous, non-violent and committed for the long run.

News Dissector Danny Schechter covers these issues daily for newsdissector.com. He directed Plunder the Crime of Our Time. A DVD o the financial crisis as a crime story. (Plunderthecrimeofourtime.com) Comments to dissector@medichannel.org