Occupy Wall Street (OWS) — and similar protests — don’t fit into the trite frames of America’s mainstream news, but rather represent a collective message of people laying their bodies down against the depredations of modern-day capitalism, as poet Phil Rockstroh explains.

In my opinion, when people opine that the OWS movement is about — or should be about — the airing of this particular grievance or that it must bandy this or that particular demand — they have missed the point.

Of course, collectively, OWS evinces a force of resistance against corporate greed and a critique of the failings of the present political system. Yet, as is the case with any living thing, to reduce its essential nature to facile descriptions diminishes it. 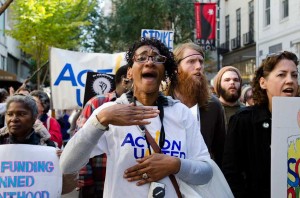 Protesters in an Occupy Philly march (Photo by Ted Lieverman)

As with human perception of life itself, experiencing freedom carries an ineffable quality, a wordless grandeur.

“Human language is like a cracked kettle drum on which we beat out tunes for bears to dance to, when what we long to do is make music that will move the stars to pity.” Gustave Flaubert

Through it all, the immanent quality of and inchoate longing for freedom remains within us: Although present, it is not always in plain view. Its presence in our lives is, perhaps, best summed up by this Irish aphorism:   “Mrs. O’Kelly, do you believe in fairies?” “No, I don’t — but they’re there.”

Over and over again, too many well-intentioned sorts continue to insist that it is imperative that we inform the nice people of the middle-class (nice people who, given the nature of imperium, willingly feed off the blood of empire like the charges of a vampire) that there are well-mannered working people on site at OWS encampments — not only spittle-launching, leftist radicals.

Excuse me, but, for many years now, so-called “crazy” leftist radicals have been damn near the only ones who have had the clarity of mind to give a cogent critique of empire have been willing to point out the exploitive, soul-demeaning mode of existence inherent to the militarist/national security/corporate/consumer/ duopolistic state–and, as a result, we have been marginalized, entirely excluded from mainstream debate and discussion.

Let us have a little rendezvous with reality; otherwise, the operatives of the status quo will frame the narrative, once again, and will claim victory by co-option.

This is the method by which the capitalist status quo has maintained its inverted totalitarian set-up since the popular uprisings of the 1960s, by means of generous economic rewards (the perks and privileges of the corporate state) for its de facto propagandists and exclusion from the official narrative for dissenters. Don’t buy into the false narrative.

Personally, I refuse to eschew the designation of anti-capitalist radical. You cannot shame me for knowing where the bodies of empire are buried and who laid them in their graves. To the landfill of history with capitalism — the wasteful, cracked-brained economic system that created said landfill.

The preening liars at Fox News and other well-rewarded propagandists of state capitalism will disseminate lies, big and small, regardless of our actions … that is what they do. Be cautioned: Never tap dance for the approval of a lying, manipulative, power-mad fascist. Once, you begin to do so you co-sign his narrative — thus he owns your hapless ass.

“I’ve been absolutely terrified every moment of my life – â€¨and I’ve never let it keep me from doing a single thing I wanted to do.” -Georgia O’Keefe

Accordingly, the lessons of the 1960s e.g., COINTELPRO operations reveal that when street and riot police are ordered to pull back, as in Oakland, agent provocateurs will infiltrate mass political gatherings. Withal: You can bet those masked bastards shouting hate-speak and breaking windows are cops.

He is there to draw the cameras of the corporate media towards the scenes of chaos and strife that he seeds in order to turn bourgeois sentiment against reform movements that might change their lives for the better to create the false narrative that the police are the only bulwark the middle-class has against destruction-sowing crazies, who, if given free reign, will leave in rubble and ashes everything the middle-class holds dear.

To avoid being falsely labeled: First, endeavor, by inward searching and outward (even failed) endeavor, to know who you are. Then lay claim to your own identity. Otherwise, garnering the clarity required to apprehend what you’re up against becomes difficult.

The Greek word for one of the three figures representing The Fates is Moira — which translates into portion. And that is key to grasping what is happening from Cairo to Athens to New York City to Oakland. Ergo, people are rising up and fighting for the rightful and just portion of their lives and fates that have been increasingly commandeered and controlled by a corrupt elite whose rule has, heretofore, been sustained by a disproportionate distribution of wealth, privilege and power.

Across Greece, people have awaken to the knowledge that passivity is slavery — that capitalism is economic cannibalism. State capitalism, also, devours the dignity of its victims. Yet, after a time, a number of people will rise up against exploitation and will demand their portion of fate.

At this point in time, the term “general strike” holds a deep and resonate appeal. The word “general” suggests that the isolation of daily life experienced under the atomizing circumstances of globalized corporate capitalism can be upended — that there can be a sense of unity — that a movement en masse is possible (yet not a mass movement to war, but a movement en masse towards equity and fairness) by beginning, at long last, to “strike” back — to counterpunch with focused blows those who have kept the harsh, inequitable order of the present era in place by means of intimidation and bribery.

Capitalism — you are a rotting, flesh-eating zombie — there are sacred spark stippling the air around you; these sparks are borne of flames of sacred vehemence. For too long, people have been bled dry by the heart-desiccating aspirations and dehumanizing modes of economic coercion that maintain the neoliberal paradigm.

Moreover, the flames of resistance are only fanned when your apologists claim that the system in place provides the best, in fact, the only way to exist in the world and attempt to smother the world’s growing fury with police-state tactics.

The stakes are great. Much has been stolen from us: essential qualities, more valuable than money. As the populace of the corporate/consumer state, we have been induced, by means of small bribes and hyper-authoritarian coercion, to sign a social contract that sells our essential nature on the cheap, i.e., to be defined (hence diminished) as a consumer, a commuter, an employee, a Republican, a Democrat, a member of a demographic group, a cipher, a sucker, a bystander in one’s own fate.

Don’t let any system define you, narrow, then appropriate, your innate and essential self towards exploitive agendas, as does the present societal set-up, for the incommensurate profits of a self-serving few — who, in turn, insist that your objections to the situation are unreasonable, outrageous, untoward — too crazy to be uttered in decent company.

In short, a system in which its operatives demand that you stay in your place and not question the motives and actions of your betters.

In contrast, a radical sensibility insists you must inhabit an inner landscape wherein no state, corporation — nor any type of extant system holds dominion over your essential self — that you inhabit a landscape that is best navigated by your own interior lode star.

Therefore, you have no obligation to justify your existence to any man or system. To even attempt to do so would deliver an injustice to your heart, for this is a state of being as impossible to quantify as a flight of imagination — yet it exists within as immanent as the architecture of desire.

“The main interest in life and work is to become someone else that you were not in the beginning. If you knew when you began a book what would you say at the end, do you think that you would have the courage to write it?” –Foucault

Who will you meet, where will you travel, what battles will be enjoined and what loves surrendered to as you write the Book of Your Being? What thoughts and feelings will be discovered therein?

Will the words you etch upon the finite moments of your time on this earth evoke deep yearning, like Wordsworth’s limning of his longing to see beyond the prison walls of quotidian experience?

[]I’d rather be
A pagan suckled in a creed outworn;
So might I, standing on this pleasant lea,
Have glimpses that would make me less forlorn;
Have sight of Proteus rising from the sea;
Or hear old Triton blow his wreathÃ¨d horn.
excerpt, The World Is Too Much with Us–William Wordsworth

Or will you refuse to rise, when commanded to do so, as did Rosa Parks on her fateful bus commute through the Jim Crow-demeaned streets of 1950s Montgomery, Alabama; or will you be seized by holy lamentation, like Allen Ginsberg, as he howled anguished prosody into the pity-devoid face of the devouring Moloch of the commodified empire; or will your genius be revealed like the impertinent flutter of Groucho Marx’s eyebrows on the screen of Depression-era movie houses; or will you reclaim your own heart by the act of telling off some son-of-a-bitch of a boss, as you quit a dead-end, heart-deadening job and then resolve to join the defiant multitudes at an OWS encampment?

Mainly, are you prepared to surrender to the everyday miracle that transpires when one, fleetingly, finds the resolve to open one’s being to the uncertainties of freedom — when one chooses to break the hold of those fear-bestowing, resentment-besotted demons of banality known as Easy Cynicism, Displaced Resentment, and Habitual Passivity — those disingenuous, corporate/consumer state bards of the Bardo — whose (extant and internalized) narratives have sustained late capitalism.

“Cynicism is just another mode of conformity”. –Theodor W. Adorno

Don’t delay: Act as if your life — if not the survival of the planet — depends on it, because, at this point, it does.