The response to Occupy Wall Street is personal for many participants and visitors alike. For historian William Loren Katz, the iconic protest in Lower Manhattan was a reminder of Depression-era “Hoovervilles” — but with a youthful optimism.

On Saturday, my wife and I visited Occupy Wall Street to see history in the making, and to donate two of my relevant books to the OWS library. The entrance point on Broadway of Zuccotti Park, formerly called Liberty Plaza, stops one cold.

You face a dozen or so men and women of various ages holding large, hand-written signs telling how job loss, lack of decent pay or no affordable health care brought poverty and/or tragedy to their door. Only one or two signs are overtly political. 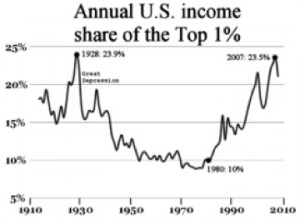 Entering the encampment reminded this historian of the 1930s Great Depression “Hoovervilles”, but with a clientele that was energetic, intellectual, eager to talk. It was an odd mix as international and American tourists pushed into the OWS crowd of young and old, men and women of all classes and races.

Jostling together were jobless workers, union members, students with large college repayment loans and others of various ages who either landed at the bottom of a sinking economy, or thought they were headed that way. Establishing a beachhead to challenge Wall Street seemed to cancel any morbid sense of victimhood from what I could see.

These mainly young people quickly found they are hardly alone or uncared for. Restaurant donations led to an extended food counter of gourmet and ethnic choices including a fancy Greek spinach pie and a classy Bavarian fudge cake. Men and women periodically arrived to donate home-made muffins and other baked goods.

Casually dressed OWS residents and better dressed visitors crowded the chow line. If “class warfare” was on anyone’s mind it was absent at ground level. Nobody seemed to mind the presence of visitors who looked like the 1 percent.

Hoping their time had come, representatives of traditional socialist groups handed out printed screeds. Far more numerous and impressive were the young people handing out personally scribbled Xeroxed statements detailing their political complaints, pointing to those responsible for the financial disaster, or decrying war. Many people pleaded for a new and loving community. Words were soft-spoken and politeness was common.

People of all ages and both sexes swept the grounds and cleaned up for the live-ins and tourists. One sign pointedly said, “Take care of your own stuff!” Another woman’s sign demanded, “No more photographs!” One sign announced specific times for “nonviolent training” and another told when and where in Zuccotti Park people would gather to celebrate the upcoming Jewish holiday.

In several corners, circular groups were engaged in earnest debate about new models of thought, political strategies, and public policies, or how to keep the park policed, neat and livable.

Here in a one block park ringed by towering skyscrapers and a nearby quiet, unsettling, and largely ignored police presence, was a community trying to plant peaceful roots.

Perhaps if we can demonstrate a warm, neighborly model, they seemed to say, the world will know there is a better way than overseas wars and feeding Fat Cat capitalism. Society, their presence said, needs to control the corporations that now own it and get to select the wrecking crew that runs it. Voters need to take government back. Maybe a new system is required.

If President Bush suddenly appeared, a few might rush to arrest him for war crimes, but I felt many more would parade him proudly into their models of peaceful living. A Tahrir Square courage and tenacity laced by youthful American optimism marks this occupation. It may not get where it wants, but not for lack of effort, and neither is it leaving its new home.

The OWS failure to issue specific demands does not signal a lack of basic agreement. They agree current U.S. wars should end, the rich should pay their share, jobs must be created. They insist Wall Street greed has not only produced poverty, militarism and income inequality, but has blocked the march to a just and democratic society. And they are ready and eager to march.

My wife and I began to leave pushing our way through residents, visitors and those clearing and cleaning the park. One middle-age man paused, looked up from his broom and thanked me for coming. I thanked him for being there.

William Loren Katz is the author of Black Indians: A Hidden Heritage and forty other books. His website is: www.williamlkatz.com, where this article first appeared.

3 comments for “Modern-Day ‘Hooverville’ with Hope”