The mainstream news media still seems baffled by the Occupy protests, wanting them to spell out specific demands mostly likely, so experts and pundits can then tear the ideas down. So far, the protesters are getting their message across through their simple presence, Danny Schechter reports.

One of the most frequently repeated, recycled and dismissive questions about Occupy Wall Street is its supposed lack of an “agenda.” The “what do you people want” question has featured in media interviews almost to the exclusion of all others. 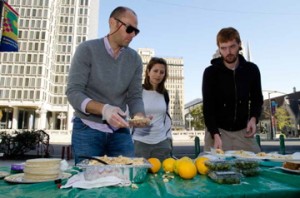 Many are just frothing at the mouth for some political positions they can expose as shallow or absurd. Teams of pundits are being primed to go on the attack once they have some bullet points to refute.

Many police departments don’t need bullet points to go on the attack. They have been having a field day arresting occupiers in many cities, while collecting overtime and readying their own bullets (rubber and otherwise) as needed.

Some on Wall Street already denounce these adversaries as “unsophisticated” for their formulation of the 99 percent versus the 1 percent. You’d expect the 1 percent to reject this way of seeing the world.

On the Right, there is no factual inaccuracy or bizarre incident they won’t invoke to dismiss a movement they lack the mental tools to understand.

Some gun nut wrote: “Don’t be mistaken. The Wall Street protestors aren’t peaceful hippies congregating about greed or social inequality. They are uniting to destroy America and everything we stand for. Their model is the ‘Arab Spring’ which discharged their Governments in favor of anti-Israel agitators and Muslim fundamentalists. They are NOT about freedom, but about World domination and total control. And Obama is supporting them ………. fully.”

Others like Reverend Jesse Jackson want more engagement with legislative issues and even the backing of candidates.

Democratic candidates, even progressive ones like Elizabeth Warren who’s running for the U.S. Senate in Massachusetts, seem ambivalent about backing the occupations. Most are taking their cue from President Obama who only says he understands their “frustrations.”

Some on the Left, including friends of mine, seem to suffer from undisguised vanguardism and want the Movement to raise the red flag right away, despite all the anarchists, libertarians and Democrats among them.

Here’s Bill Bowles writing from London “Although many on the established Left are claiming OWS as their own, latching on to the anti-capitalist theme that figures prominently, at least in some locations, it’s clear that the focus of the OWS ‘movement’ varies greatly from place to place.

“Thus where it all started, in downtown Manhattan, the focus is very much on capitalist criminals rather than criminal capitalism. But little or no mention of the dreaded word – socialism, ironically for fear of alienating even those who occupy, never mind what the rabid corporate/state media does with that which shall remain nameless.”

These are old and, in many instances, predictable debates but what they miss is what’s new and so vital about this decentralized, mostly leaderless movement that has captured the world’s imagination.

Judging by the media attention it has received and polls that show large numbers of supportive Americans, it is touching a global nerve and changing the national, even international conversation. It seems to be doing a lot that’s right!

Not only have they survived mass arrests and continuing harassment, they showed they could brave what Mother Nature threw their way. They are in the best tradition of the post office which still projects this creed despite the specter of cutbacks: “Neither snow nor rain nor heat nor gloom of night stays these couriers from the swift completion of their appointed rounds”

Occupy’s “couriers” have self-appointed rounds in self-managed occupations run by work groups and guided by participation in a daily  General Assembly where activists listen to each other and disagree without being disagreeable.

They have raised a war chest of several hundred thousand dollars. They keep their sites clean with their own sanitation department. In New York, they feed their own with their own kitchen that also serves homeless people in the neighborhood. They even have their own “people’s library.”

In many ways, they are creating ways of cooperative living that they want society to be like. The key to it all is commitment and engagement on the individual level. This way of fusing pragmatism and idealism is what makes it so impressive.

Movements that function from the top-down are more controlled but not necessarily more effective.

At this point, the Occupy movements is still growing, and still spreading its aura more than its message. When you think of how many unemployed people there are and how many others are coping with foreclosures or student debt you can see its potential for organizing and outreach.

Already activists in Oakland, where attacks by police from 19 different jurisdictions have galvanized a mass reaction, are calling for a Nov. 2 “general strike.” Are they well organized enough to pull this off and to shut down a whole city?

This may be a case of overreaching in reaction to a brutal police action. But, bear in mind that since the attack occurred, no one is cheering. The city’s mayor says she now supports Occupy. The police are now supposedly investigating their own conduct, and the occupiers are back in the plaza they were forced to abandon.

Police attacks often boomerang with the public siding with citizens, not cops. There is a lot to be optimistic about.

Slavoj Zijek writes in In These Times,  “The Western Left has come full circle: After abandoning the so-called ‘class struggle essentialism’ for the plurality of anti-racist, feminist, gay rights etc., struggles, ‘capitalism’ is now re-emerging as the name of THE problem.”

Let’s put the emphasis on words like “emerging” and “awakening,” Politics is always a process. Give people time to distinguish their friends from their enemies. Let’s trust the wisdom of the people. They seem to “get it” much more than the media or the pols.

It is significant that there has been talk of a national convention in Philadelphia on July Fourth next year. Right now, as for a definitive agenda, action always speaks louder than words.

News Dissector Danny Schechter writes the daily newsdissector.com blog. He directed the film Plunder about the financial crisis as a crime story. (Plundthecrimeofourtime.com) Comments to dissector@mediachannel.org