Many Americans are accustomed to the top one percent on the economic pyramid getting the bulk of the benefits from society’s work and investments, as if that’s the natural order of things. But a new movie “In Time” presents a similar dilemma in a parallel reality, writes Lisa Pease.

New Regency Pictures must be thrilled at the fortuitous timing of the launch of their new film “In Time.” The science fiction thriller revolves around a world in which time is the ultimate currency and most people can’t get enough of it.

The world is divided into time zones, most of them poor, except for the zone of New Greenwich, where the richest 1 percent live. 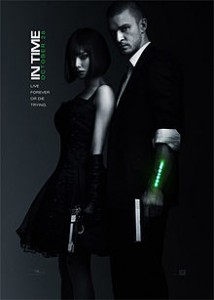 The premise of the world of the film is this: All people stop aging genetically once they hit 25. They have to earn every minute over 25. If they run out of time, they die. And to earn time is difficult for the 99 percent. Caught in low-level jobs or, in some cases, resorting to crime, the scrappy ghetto inhabitants who populate the world of the film make difficult choices about what to do with the time they collect.

The story is propelled by Will Salas, played with appropriate action hero intensity by Justin Timberlake. Will is given a gift of time at the start of the film with an admonishment not to waste it by a man who has already lived more than 100 years. He shares information with Will that sends Will on a quest to see how the 1 percent live.

When Will’s donor dies, the “timekeepers” — the police in this society — believe Will killed him to steal his time, a common occurrence among the 99 percent. As Will crosses into New Greenwich, he is pursued by one Timekeeper in particular who refuses to quit, playing Javert to Timberlake’s Valjean.

In New Greenwich, Will meets one of the wealthiest men in the world, Philippe Weis, played (in a brilliant piece of casting) by Vincent Kartheiser, the rich young prick of Mad Men. Weis possesses untold millions of years of time, but he is poor in other areas that really matter.

Will befriends Philippe’s caged bird of a daughter Sylvia (Amanda Seyfried), who longs for adventure and to be free of the bodyguards who protect her from others who would steal her time.

Together they set off on an adventure that may cost them all the time they have left, a risk both are eventually willing to take, because society is broken, and they think they have a chance to fix it. They don’t know if their plan will work. But they know they have to try.

This isn’t a character study. This isn’t an emotional drama. But it is a fascinating, fast-paced ride through a parallel reality that is fun, interesting, and strangely heartening.

As winter storms threaten to put a chill on the Occupy Wall Street group and its compatriots in other cities, this film has the potential to send flurries of new protesters into their camps. The film presents a compelling — if obvious — parable about what happens when some keep all the bounty for themselves and force the rest to support the excessive lifestyle choices of the few.

It’s unfair. It’s not right. And it must be changed. But change is never easy and requires the sacrifices of many.

As I left the theater, I felt like I was still in the movie. I was at The Grove, a fancy village-like mall in Los Angeles where the 1 percent shop.

Outside the theater, a Christmas tree was being rebuilt. Branches from a stately forest veteran that had been sheared off a couple of days ago were now being groomed and reattached, propped up by blocks of additional wood, because nature’s own creation evidently isn’t good enough for the 1 percent.

Near the tree sat diners eating $50 steaks and drinking $100 bottles of wine. I passed $990 Prada pumps en route to my humble abode in a much lower rent district nearby. I put my worn-out shoes in the closet, opened the refrigerator and pulled out a bag of fading carrots.

But I’m not complaining. I’m grateful. I have time. And I have the keen realization that it is — by far — my most precious possession.