From the Archive: U.S. officials are congratulating themselves after NATO aircraft bombed a convoy fleeing the Libyan town of Sirte, leading to the capture and murder of Muammar Gaddafi the grisly affair justified by Gaddafi’s supposed role in the bombing of Pan Am 103. But the evidence goes in a different direction, Robert Parry wrote.

As Americans turn to their news media to make sense of the upheavals in the Middle East, it’s worth remembering that the bias of the mainstream U.S. press corps is most powerful when covering a Washington-designated villain, especially if he happens to be Muslim.

In that case, all uncertainty about some aspect of his villainy is discarded. Evidence in serious dispute is stated as flat fact. Readers are expected to share this unquestioned belief about the story’s frame and that usually helps manufacture consent behind some desired government action or policy. 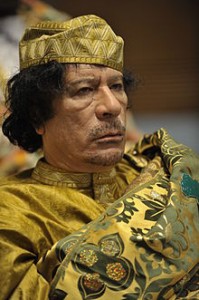 At such moments, it’s also hard to contest the conventional wisdom. To do so will guarantee that you’ll be treated as some kook or pariah. It won’t even matter if you’re vindicated in the long run. You’ll still be remembered as some weirdo who was out of step.

And those who push the misguided consensus will mostly go on to bigger and better things, as people who have proved their worth even if they got it all wrong. Such is the way the national U.S. political/media system now works or some might say doesn’t work.

Perhaps the most costly recent example of this pattern was the Official Certainty about Iraq’s WMD in 2002-03. With only a few exceptions, the major U.S. news media, including the New York Times and the Washington Post, bought into the Bush administration’s WMD propaganda, partly because Saddam Hussein was so unsavory that no one wanted to be dubbed a “Saddam apologist.”

When Iraq’s WMD turned out to be a mirage, there was almost no accountability at senior levels of the U.S. news media.

Washington Post’s editorial page editor Fred Hiatt, who repeatedly reported Iraq’s WMD as “flat fact,” is still in the same job eight years later; Bill Keller, who penned an influential article called  “The I-Can’t-Believe-I’m-a-Hawk Club,” got promoted to New York Times executive editor after the Iraq-WMD claims exploded leaving egg on the faces of him and his fellow club members.

So, now as Libyan strongman Muammar Gaddafi reprises his old role as “mad dog of the Middle East,” Americans are being prepped for another Middle East conflict by endlessly reading as flat fact that Libyan intelligence agents blew up Pan Am Flight 103 back in 1988.

These articles never mention that there is strong doubt the Libyans had anything to do with the attack and that the 2001 conviction of Libyan agent Ali al-Megrahi was falling apart in 2009 before he was released on humanitarian grounds, suffering from prostate cancer.

Though it’s true that a Scottish court did convict Megrahi while acquitting a second Libyan the judgment appears to have been more a political compromise than an act of justice. One of the judges told Dartmouth government professor Dirk Vandewalle about “enormous pressure put on the court to get a conviction.”

After the testimony of a key witness was discredited, the Scottish Criminal Cases Review Commission agreed in 2007 to reconsider Megrahi’s conviction out of a strong concern that it was a miscarriage of justice. However, again due to intense political pressure, that review was proceeding slowly in 2009 when Scottish authorities agreed to release Megrahi on medical grounds.

Megrahi dropped his appeal in order to gain an early release in the face of a terminal cancer diagnosis, but that doesn’t mean he was guilty. He has continued to assert his innocence and an objective press corps would reflect the doubts regarding his conviction.

The Scottish court’s purported reason for finding Megrahi guilty while acquitting his co-defendant Lamin Khalifa Fhimah was the testimony of Toni Gauci, owner of a clothing store in Malta who allegedly sold Megrahi a shirt, the remnants of which were found with the shards of the suitcase that contained the bomb.

Megrahi would have had to assume that three separate airport security systems at Malta, Frankfort and London would fail to give any serious scrutiny to an unaccompanied suitcase or to detect the bomb despite security officials being on the lookout for just such a threat.

As historian William Blum recounted in a Consortiumnews.com article after Megrahi’s 2001 conviction, “The case for the suitcase’s hypothetical travels must also deal with the fact that, according to Air Malta, all the documented luggage on KM180 was collected by passengers in Frankfurt and did not continue in transit to London, and that two Pan Am on-duty officials in Frankfurt testified that no unaccompanied luggage was introduced onto Pan Am 103A, the feeder flight to London.”

Plus, there were problems with Gauci’s belated identification of Megrahi as the shirt-buyer a decade after the fact. Gauci had made contradictory IDs and had earlier given a physical description that didn’t match Megrahi.

Gauci also reportedly received a $2 million reward for his testimony and then moved to Australia, where he went into retirement.

Nevertheless, Megrahi’s conviction did assuage the understandable human desire to see someone punished for such a heinous crime, albeit a possibly innocent man. The original accusations against him in the early 1990s also fit with the geopolitical interests of powerful figures in Washington and London.

Megrahi’s conviction allowed more international pressure to be put on Libya, which was then regarded as the archetypal “rogue” state. Indeed, it was to get those onerous economic sanctions lifted that Libya took “responsibility” for the Pan Am attack even as Libyan officials continued to deny having anything to do with it.

Yet, despite all these reasonable doubts, the U.S. news media continues to treat Libya’s guilt in the Pan Am case as a flat fact.

For instance, the New York Times led an article on March 18 about the CIA’s mixed attitudes toward Libya by noting that the CIA’s deputy station chief in Beirut was killed “when Libyan intelligence operatives blew up Pan Am Flight 103 above Scotland in 1988.”

One has to assume that if the Times didn’t have an anti-Gaddafi bias, the article would at least have thrown in an “allegedly” or a “believed to have” or a “disputed,” a word the Times and other U.S. news outlets routinely use when dealing, in the opposite way, with another Muslim “designated villain,” Iran’s President Mahmoud Ahmadinejad.

Whenever an American news organization refers to Ahmadinejad’s 2009 reelection, the word “disputed” is almost always included, if not stronger language like “stolen” or “rigged.” Although it’s technically true that the election was “disputed,” no credible evidence has been presented to prove that Ahmadinejad used fraud to win.

In fact, the evidence goes the other way. Though widely ignored by the major American news media, a study by the Program on International Policy Attitudes (PIPA) at the University of Maryland found little evidence to support allegations of fraud or to conclude that most Iranians view Ahmadinejad as illegitimate.

PIPA analyzed multiple polls of the Iranian public from three different sources, including some before the June 12, 2009, election and some afterwards. The study found that in all the polls, a majority said they planned to vote for Ahmadinejad or had voted for him. The numbers ranged from 52 to 57 percent just before the election to 55 to 66 percent after the election.

“These findings do not prove that there were no irregularities in the election process,” said Steven Kull, director of PIPA. “But they do not support the belief that a majority rejected Ahmadinejad.”

An analysis by former U.S. national security officials Flynt Leverett and Hillary Mann Leverett reached a similar conclusion. They found that the “personal political agendas” of American commentators caused them to side with the anti-Ahmadinejad protesters who sought to overturn the election results. [See Consortiumnews.com’s “How US Media Botched Iran’s Election.”]

Among those biased American journalists on assignment in Iran in 2009 was Times executive editor Keller, one of the “liberal hawks” on Iraq. He coauthored a “news analysis” that opened with an old joke about Ahmadinejad looking into a mirror and saying “male lice to the right, female lice to the left,” disparaging both his Islamic conservatism and his rise from the street.

The use of the word “disputed” continued to describe the Iranian election even after defeated candidate Mir-Hossein Mousavi failed to produce any significant evidence. The best Mousavi’s people could do was accuse Ahmadinejad’s supporters of giving pay raises, passing out food and printing millions of extra ballots none of which prove election fraud.

Raising pay and handing out food may constitute machine politics, but not fraud. Printing extra paper ballots is simply what is done in elections when it’s unclear how many people will vote or where they will cast their ballots.

However, since Ahmadinejad is designated an American villain, stories are routinely slanted against him. Thus, his election will always be “disputed,” just as the opposite rule will apply to doubts about Libya’s or Megrahi’s guilt on Pan Am 103. That will never be “disputed.”

In a similar way, when a designated enemy sends troops across a border whether invited by the existing government or not it is an “invasion.” However, when a U.S. ally like Saudi Arabia sends its troops into Bahrain to help crush a popular uprising, the word “invasion” disappears. Neutral words apply like “troop movement” or “intervention.”

It is through the media’s distorted lens darkly that Americans must discern facts and draw conclusions.

2 comments for “Through the US Media Lens Darkly”