The Republican complaint that any talk about raising taxes on the rich is “class warfare” has now refocused on the protests against Wall Street greed as an example of “mob” rule, instigated by President Barack Obama. But Danny Schechter finds the GOP accusation absurd.

Who is behind the Wall Street protests? Republican House Majority Leader Eric Cantor has searched up and down in his usual rigorous manner and found the culprit. 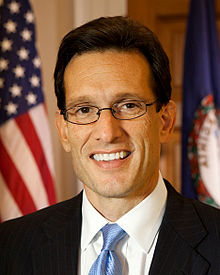 In one sentence, he blamed the President who, in GOP conspiracy think, is to blame for everything, including bad weather. He also not so subtly conjures up the memory of the Mafia, New York’s perennial bad guys.

In one phrase, Obama stood accused of encouraging these pause for righteous indignation MOBS!

Never mind that if you spend any time at Occupy Wall Street, you will encounter as many criticisms of the President’s policies save the questions about his birth and “real American-ness” as you would at a conclave of the Tea Party.

Only the criticism is different. In the latter world of make-believe, he is a hard-line Socialist. In the former, he is, in effect, a Republican, a backer of the Wall Street capitalists whom the occupiers are battling.

And if my memory of history has not faded, wasn’t it the British who called the original Tea Party a “mob”? Let’s not let the facts get in the way of a partisan smear.

The GOP is in trouble, unable to find a presidential candidate they can agree on, unable to come up with any program to do anything about the country’s economic distress, and unable to erode the growing public disgust with the Congress they now control.

All they can do is snarl like an attack dog. Their “blame Obama” mantra may cheer their faithful, but convinces no new potential voters.

The Wall Street protesters are their latest distraction, aided and abetted by the hardliners at Fox News, who wouldn’t be blasting away if the occupations weren’t successful in getting a counter-narrative into the media stream.

The Occupy Wall Streeters don’t waste any time attacking politicians because they are estranged from all traditional party politics. There is danger of self-marginalization in this approach, but it also reflects a certain purity of purpose.

Many in the Park fear co-optation or “capture” by Democrats. Occupy Wall Street is not partisan but has now endorsed an Oct. 15 march for jobs, sponsored by the AFL-CIO.

Richard Trumka, the president of the labor federation, visited Zuccotti Park and won their support. That nationwide action will be endorsing Obama’s compromised jobs bill.

This does not mean that the protest will align with the Obamacrats. Al Jazeera spoke with Katie Davison, one of the activists who explained their way of looking at the world.

“In making a demand, you’re essentially recognizing the authority of the people who are going to carry it out,” he said.

“Our message is that the system that we have is broken. It doesn’t work. People aren’t even discussing the real problems Americans face.”

So far, Wall Street firms have not commented on the protests, but their condescension and arrogance is clear to anyone at the Park when employees at the big firms on “The Street” drop in at lunchtime as if they are going to a Zoo. (Police block the protesters from marching on Wall Street.)

Even as this movement swells nationally and even internationally, the media picks away at it with a combination of sarcasm leavened with growing respect. New York Times op-ed columnists and even the editorialists have been increasingly positive.

So far, the movement has not tried to directly impact on policy even though its marches are driven by signs and chants mounting a frontal assault on economic inequality, wars, phony bailouts, and the many ways they say the “1%” oppresses the “99%.”

Simplistic or not this view has built a hard charging movement with its own newspaper, and scores of work groups and committees that provide opportunities for individuals to get involved in the nitty-gritty effort at building their structures and running a complicated but democratic community within a larger society dominated by top-down politics.

The energy and idealism is evident to anyone with the patience to look.

Not everyone has that patience. As some kind of fortune would have it, I sat next to a talkative Wall Street veteran at a dinner Saturday night to break the fast of the Jewish Yom Kippur New Year.

From his life behind a terminal, selling financial products, or, in his words, “making up stories that his customers like to hear,” the protests are a world away, unlikely to stop his life’s work of endlessly making money from money.

His view on the surface was upbeat. This past week marked, in his view, the end of Europe’s banking crisis. (He works for a company owned by two French banks.) He seemed to be gloating about a new TARP-style bailout there that would fix everything.

For him life is about the “spreads” between what you buy and what you sell.

To him, the TARP bailout “saved the United States of America.” He backed McCain in the last election but praised Obama for backing TARP.

He blames Democrats like former House Finance chairmen, Henry Gonzalez and Barney Frank (who he acknowledges were and are sincere), for screwing up the financial system.

He blames the government for demanding that mortgages be affordable and sold on a non-discriminatory basis. When pressed, he admitted there had been predatory and racist lending practices in the past, and that the subprime mortgages were a disaster.

But the more he talked, the more it was clear that his real anger is reserved for Wall Street’s bosses, the people who run the firms and are, in his view, totally corrupt.

He was one of those who lost his pension and shares when Lehman Brothers and Bear Stearns went down. He was wiped out and had nothing good to say about the people at the top.

Curiously, he was as angry with these men in the suites as are the folks in the streets. He was just as alienated although he’s not about to turn on capitalism and instead sniped at a retired schoolteacher at the dinner for having a good pension that he now lacks.

His resentment, insensitivity and sense of class entitlement were insufferable. Yet, even though he works for a leading financial firm, he saw himself as a victim too, in effect, a 99 percenter.

Where will he stand in the emerging “Mob War” when the “Occupy Family” confronts the “Goldman Sachs Family”?

As the financial crisis intensifies our social crisis, stranger bedfellows will emerge.

News Dissector Danny Schechter directed Plunder The Crime of Our Time, (plunderthecrimeofourtime.com) and writes a blog at NewsDissector.com. Comments to dissector@mediachannel.org