Exclusive: President Barack Obama’s health care law is heading to the rightist-dominated U.S. Supreme Court which may render a decision during the heat of Campaign 2012. Some Republican jurists are sure to claim that the law violates the “originalist” thinking of the Founders, but Robert Parry offers a differing view.

Today’s American Right is fond of pushing the idea of “originalist” thinking by the Founders to rally opposition to government initiatives that address modern-day problems. The claim is that if George Washington, James Madison and other drafters of the Constitution didn’t anticipate something, the federal government must not act on it.

This approach, which fits with what conservatives call “strict constructionism,” has a facile appeal to many Americans, especially Tea Partiers who like to dress up in Revolutionary-era garb and channel the Founders’ supposed hatred for the federal government. The argument is sure to reappear as the rightist-dominated U.S. Supreme Court considers the new health care law next year.

However, the truth is that the Founders devised the federal government to be a powerful and adaptable entity with broad implicit powers, comparable to a sophisticated software platform that can handle a variety of tasks, anticipated and unanticipated.

Most significantly on this point, the Constitution gives Congress the power to “regulate commerce with foreign Nations and among the several states,” the so-called “commerce clause,” which traces back to the very first substantive presentation at the Constitutional Convention on May 29, 1787.

Then, the Virginia delegation had one of its members, Edmund Randolph, present a critique of the Articles of Confederation, which had governed the United States for the prior decade and which created a federal system that was so weak that it threatened the future of the young nation.

Virginia’s presentation laid out the framework that would later become the U.S. Constitution, creating a powerful federal government that transferred sovereignty from the 13 original states to “we the people” as represented by a new national Republic, the United States of America.

Beyond requirements for a common defense, foreign policy, currency and federal taxing authority, the Founders recognized the need to coordinate American commerce so it could compete effectively with Europe and other nations around the world.

James Madison’s convention notes on Randolph’s presentation recount him saying that “there were many advantages, which the U. S. might acquire, which were not attainable under the confederation – such as a productive impost [or tax] – counteraction of the commercial regulations of other nations – pushing of commerce ad libitum – &c &c.” 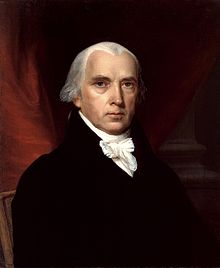 In other words, the Founders at their most “originalist” moment understood the value of the federal government taking action to negate the commercial advantages of other countries and to take steps for “pushing of [American] commerce.” The “ad libitum – &c &c” notation suggests that Randolph provided other examples off the top of his head.

Historian Bill Chapman summarized Randolph’s point in his teaching materials as saying “we needed a government that could co-ordinate commerce in order to compete effectively with other nations.”

So, from that first day of substantive debate at the Constitutional Convention, the Founders recognized that a legitimate role of the U.S. Congress was to ensure that the nation could match up against other countries economically.

Obviously, the Founders could not anticipate every future challenge that the nation would face. But they dealt with that uncertainty by adopting the broad language of the “commerce clause.”

It is also worth going back to Randolph’s original presentation for an appreciation of how the Founders mostly a collection of businessmen, plantation owners and merchants recognized that a more unified nation would help them advance their commercial interests. Then, like now, the economy was paramount.

Over the next two centuries, various reforms have been needed to keep the U.S. economy strong, including Franklin Roosevelt’s New Deal programs and more recent federal actions such as the health care law.

These reforms can be viewed within the framework of how the Founders really thought. They were practical men who understood the imperative of keeping the U.S. economy up to speed with other nations.

Of course, they could not have anticipated the threat to the country from spiraling medical costs both on government and business nor the failure of private insurance to protect the health of millions of Americans. But they surely would have been concerned about any situation making the United States less competitive in the world.

According to Madison’s notes from May 29, 1787, Randolph “concluded with an exhortation, not to suffer the present opportunity of establishing general peace, harmony, happiness and liberty in the U. S. to pass away unimproved.” The Virginia delegation, which included Washington and Madison, considered a powerful federal government as crucial to those hopes.

(As it turned out after a contentious summer of debate and compromise Randolph joined with fellow Virginian George Mason in not signing the Constitution. Mason objected to the absence of a Bill of Rights, which was subsequently added as the first Ten Amendments to the Constitution.)

Today’s Tea Partiers often cite the Founders at the convention in Philadelphia as like-minded opponents of a powerful federal government, but in doing so they miss the point that the Constitution represented the most important assertion of federal authority in American history.

Besides granting sweeping powers to the federal government, the Constitution dropped key language from the Articles of Confederation that had suggested the supremacy of the states. Indeed, the Articles had described the United States only as “a firm league of friendship” among the states, not as even a “government.”

The Confederation’s Article II declared: “Each state retains its sovereignty, freedom, and independence, and every power, jurisdiction, and right, which is not by this Confederation expressly delegated.” And very few powers were delegated to the federal government.

That powerful states’ rights language was either eliminated by the Constitution or substantially watered down.

Tea Party activists will often cite the Tenth Amendment to the Constitution as evidence that the Founders were strong advocates for states’ rights, since it says “The powers not delegated to the United States by the Constitution, nor prohibited by it to the States, are reserved to the States respectively, or to the people.”

But again the Tea Partiers are missing the point. The Constitution granted broad powers to the federal government including the regulation of national commerce so there were far fewer powers left for the states.

To further appreciate how modest the Tenth Amendment language was, you also must compare its wording with Article II of the Confederation. Remember, Article II says “each state retains its sovereignty, freedom, and independence,” while the Tenth Amendment simply says powers not granted to the federal government “are reserved to the States” or individuals.

Stripped out of the new national governing document were the principles of state “sovereignty” and state “independence.” In effect, American “sovereignty” had been transferred to the national Republic that the Constitution had created.

Still, despite the broad powers of the federal government under the “commerce clause,” the prospects for last year’s health reform law may not be bright because partisan politics could play a bigger role than anything else.

While President Barack Obama’s lawyers may make strong arguments regarding the relevance of the commerce clause to the need for a national system of health insurance, the issue is expected to be addressed by the U.S. Supreme Court during the 2012 election campaign.

And, if one thing has been clear about the Republican majority on the Supreme Court, it is that it is highly partisan, often using its power to interpret the Constitution as a club for strengthening Republican political power.

No better example exists than the case of Bush v. Gore in December 2000, when five Republican justices decided that they wanted George W. Bush in the White House and then came up with legal arguments to justify their pre-ordained conclusion.

Suddenly, right-wing justices like Antonin Scalia, Clarence Thomas and William Rehnquist were signing on to an unprecedented interpretation of the “equal protection” clause of the Fourteenth Amendment to ensure Bush’s “election,” despite him losing the national popular vote and probably the vote in Florida to Gore. [For details, see Neck Deep.]

If today’s partisan Republican justices see an opportunity to deal Obama’s reelection efforts a severe body blow, one can only expect that they will take the shot.

Just as in 2000, when the Republican justices feared losing their control of the Supreme Court if Al Gore had been allowed to take the White House (and appoint one or two Democratic justices), they will have similar fears about a reelected President Obama.

After all, the dirtiest secret about the U.S. Constitution is that it means whatever five justices on the U.S. Supreme Court say it does. Historically, justices have generally applied reason and scholarship to these determinations (with some shocking exceptions).

But today’s highly partisan atmosphere, which also pervades the Supreme Court, may well carry the day whatever the Founders would have wanted.

[For more on these topics, see Robert Parry’s Secrecy & Privilege and Neck Deep, now available in a two-book set for the discount price of only $19. For details, click here.]

Robert Parry broke many of the Iran-Contra stories in the 1980s for the Associated Press and Newsweek. His latest book,Neck Deep: The Disastrous Presidency of George W. Bush, was written with two of his sons, Sam and Nat, and can be ordered at neckdeepbook.com. His two previous books, Secrecy & Privilege: The Rise of the Bush Dynasty from Watergate to Iraq and Lost History: Contras, Cocaine, the Press & ‘Project Truth’ are also available there.

← ‘Moneyball’: The Value of Reason
Finding Peace in Religious Scholarship →

7 comments for “Would the Founders Back Health Law?”