Exclusive: Visiting Omaha Beach and the nearby American cemetery of World War II dead recalls a moment in time when the United States sacrificed to stop a global epidemic of madness. But Robert Parry discovered that those memories also underscore how the United States has since lost its way.

My pilgrimage to the World War II beaches of Normandy was a reminder to me of what the United States meant to the world not that long ago and the troubling contrast with today.

Before heading to Omaha Beach the iconic heart of D-Day heroism I spent several hours at Caen’s World War II museum where you literally descend down an inclined walkway into the murderous madness that engulfed Europe in the 1930s.

It is still hard to imagine that a racist fanatic like Adolf Hitler could gain control of Germany, then one of the world’s most advanced civilizations, and that he could win over enough Germans to undertake various forms of mechanized slaughter.

There was, of course, a long history in Europe of such butchery, from the Roman conquests more than two millennia ago, through the Christian religious wars of the middle of the last millennium to the wholesale killing of World War I.

Indeed, that European tendency to periodically sink into bloody barbarism was the historical backdrop of the American Revolution.

In creating a new Republic, the Founders tried to inoculate the United States from some of those viruses prohibiting a national religion, restraining the Executive’s war-making powers and cautioning against entangling alliances.

But the more integrated world of the 20th Century made isolationism a difficult approach.

By the 1930s, Europe had gotten itself into another fix with global implications. The German business elite had decided that Hitler was the man who could stop the rise of Bolshevism and regain some of Germany’s lost pride and territories from World War I.

Great Britain and France made some appeasing gestures toward Hitler by restoring land that had been stripped from Germany, but that only encouraged Hitler’s megalomania.

Soon, Hitler’s aggression against Poland pushed matters too far, shoving Europe into yet another war. France soon fell to Germany’s military might and Great Britain struggled under an unprecedented aerial bombardment focused on civilian targets.

Meanwhile, half a world away, Germany’s fascist allies in Japan were expanding their own empire and chafing against American power in the Pacific. After Japan’s surprise attack on Pearl Harbor, the United States entered the war against Japan and its Axis allies.

As the war expanded, so did the carnage, both involving armies and civilians.

Under the cover of war, Hitler advanced his genocidal goal of exterminating European Jews, whom he used as scapegoats for Germany’s troubles. The Nazis’ use of roving execution squads gave way to the construction of industrial-style killing factories.

However, by 1944, Hitler’s forces had suffered a devastating defeat at Stalingrad and were getting driven back by the Soviet Red Army on the eastern front. The United States and Great Britain had mounted a successful invasion of Italy, but progress northward was slow and bloody.

The world’s attention turned to the coast of France, where an amphibious assault was anticipated, though the Germans were unsure where. The assault came on June 6, 1944, along the Normandy coast farther west than Hitler had expected.

British and American forces carried out the major landings, with other allied countries and resistance movements contributing what they could.

The U.S./British high command considered the most important landing sites as those designated Utah (for the Americans) and Gold, Juno and Sword (for the British).

But the commanders feared that there was too much territory between those principal targets, so an American landing was also ordered under the bluffs of what was designated Omaha Beach.

As the invasion got underway, the landings at Omaha Beach proved particularly bloody with some 3,000 American troops dying in a desperate struggle to overcome well-entrenched Germans controlling the high ground.

Finally, Allied beachheads were established and the Germans were driven back, but the fighting across Normandy raged for more than two months. The losses were heavy on all sides.

By the spring of 1945, the Red Army from the east and the U.S./British forces from the west had put an end to Hitler’s Third Reich. The crazed dictator committed suicide in his Berlin bunker.

The defeat of German fascism also stopped Hitler’s extermination plans, though not before nearly six million Jews and many other “undesirables” were put to death.

A year later, the Nuremberg Tribunal punished some of Germany’s leading war criminals and established what were to be principles for a future peaceful world.

A visit to Normandy is a reminder of how important the United States was in stopping the madness.

The most lasting reminder of this American contribution is the cemetery at St. Laurent-sur-Mer, where more than 9,300 U.S. servicemen are buried under row upon row of white crosses and the occasional Star of David. 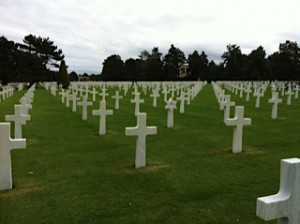 After the war had ended, the American dead were collected from across much of Europe. Their families were given the choice of repatriating the bodies or having them interred at this American cemetery near where they had died, including many with the date June 6, 1944.

The cemetery, which overlooks a section of Omaha Beach, has become a point of pilgrimage for many Americans, although during my visit on Aug. 5 there seemed to be even more French visitors paying their respects than Americans.

The whole Normandy region retains an appreciation for Americans, unlike some other parts of France where Americans often find the French standoffish or haughty. Today, the long sandy stretch along Normandy’s north coast is still called Omaha Beach in honor of the Americans who died there.

Going west from Omaha Beach toward Utah Beach, there are other tributes to the American liberators.

In the little village of Sainte Mere Eglise, a dramatic moment is recalled from the 82nd Airborne’s assault on the night of June 5, 1944, when paratrooper John Steele’s parachute got entangled on the church steeple and he played dead for hours before being disentangled and taken down.

Looking up at the church today, a replica of Steele and his parachute are there. Inside the church, a stained-glass window commemorates the American paratroopers, whose death toll of about 4,000 was even higher than the fatalities at Omaha Beach.

While war should never be romanticized and U.S. history is replete with its own acts of bloody inhumanity it is difficult for an American to come away from a visit to Normandy without a lump in one’s throat about the necessary, if brutal, actions that occurred here.

Something truly evil had gained a powerful foothold in the world and had to be stopped. But the tragedy is also what happened next, how the United States became corrupted by much of the same viciousness that the Nazis and their Axis allies had unleashed.

Over Germany and Japan, the Allies undertook their own terror bombings of civilian centers, such as Dresden and Tokyo. On Aug. 6 and 9, 1945, President Harry Truman chose to drop atomic bombs on two nearly defenseless Japanese cities, Hiroshima and Nagasaki, rather than negotiate a peace with Japan.

After World War II, the United States engaged in a fierce competition with its erstwhile ally, the Soviet Union, again rebuffing possible openings for accommodation. Opting for a new kind of empire, the United States even collaborated with ex-Nazis and similarly brutal fascists in the Third World.

In Indochina, the U.S. military killed in the millions, and in Latin America, Washington allied itself with vicious dictators trained in the dark arts of assassination and torture.

To feed the national hunger for energy, American leaders sided with authoritarian leaders across the Middle East, just as long as those despots ensured a steady supply of oil.

Part of the Problem

Instead of seeing the Americans as liberators who were part of a solution, many people around the world came to view Americans as just the new imperialists on the block, as part of the problem.

When U.S. interference in the Middle East and Central Asia led to the emergence of al-Qaeda and its 9/11 attacks in 2001, President George W. Bush told the confused American public that the terrorists simply “hate our freedoms.” Many Americans were then duped into believing that Iraq was somehow behind 9/11, even though no Iraqis were involved in those attacks.

Thus, a majority of Americans enthusiastically supported Bush’s unprovoked invasion of that Arab country, a violation of the Nuremberg Tribunal’s prohibition against aggressive war.

Some Americans were caught up in a frenzy of waving the American flag; others unfurled the Christian banner or the Star of David for a renewed “clash of civilizations” with Islam. Bigotry against Muslims has become an accepted part of political thought across much of the U.S. heartland and is eagerly promoted by the still-influential neoconservatives.

Today, the United States seems to be leading the world into a new Dark Age, where science and fact are forced to take a back seat to religious and ideological beliefs, where free-market extremism mixes with jingoism, militarism and Christian fundamentalism.

America’s most prominent “populist” movement, the Tea Party, is remarkable in that its central tenet is to make sure taxes on rich people are kept low and none of their tax loopholes even for corporate jets are closed.

Though the Tea Party denies that it is racist or has any similarities to the old-line fascist parties of Europe it appears particularly energized by its hatred of America’s first black president, having pushed false claims about Barack Obama’s Kenyan birth.

At its core, the Tea Party seems driven by a profound contempt for the necessity of democratic government as a counterbalance to the excesses of corporate power. The Tea Party amounts to a movement to shift power over U.S. society to corporate overlords.

Most recently, the Tea Party and its Republican allies shoved the United States to the brink of default, making the faith and credit of the country a hostage to right-wing demands for trillions of dollars in spending cuts but no revenue increases.

After the strategy proved successful, with President Obama and congressional Democrats bowing to the spending-cuts-only approach to prevent a default, Republicans gloated over their hostage strategy.

Senate Minority Leader Mitch McConnell, R-Kentucky, said the GOP/Tea Party approach proved the debt-ceiling limit was “a hostage that’s worth ransoming” and had “set the template for the future.”

The cumulative impact of right-wing American policies is also pushing the world toward what may be another cataclysm.

Now, the Right’s austerity demands are squeezing the embattled middle class even more, setting the stage for worsening social unrest, which is already provoking renewed racial tensions in Europe and prompting demands for more “law and order.”

Key political forces in the United States seem determined to ignore the lessons of the 1920s and 1930s and force some post-modern “Clockwork Orange” replay of those troubled times.

After spending time in Normandy and recalling the sacrifice that so many Americans made to stop one lethal virus of madness, it is disconcerting to see the United States emerging as a principal carrier of another.

[For more on these topics, see Robert Parry’s Secrecy & Privilege and Neck Deep, now available in a two-book set for the discount price of only $19. For details, click here.]

Robert Parry broke many of the Iran-Contra stories in the 1980s for the Associated Press and Newsweek. His latest book,Neck Deep: The Disastrous Presidency of George W. Bush, was written with two of his sons, Sam and Nat, and can be ordered at neckdeepbook.com. His two previous books, Secrecy & Privilege: The Rise of the Bush Dynasty from Watergate to Iraq and Lost History: Contras, Cocaine, the Press & ‘Project Truth’ are also available there.

10 comments for “US Lost Its Way from Omaha Beach”