On the 33rd anniversary of the fall of the Berlin Wall on Nov. 9, 1989, we look back on why the wall was built in this essay by the late William Blum, published on July 28, 2011 on Consortium News.

The Berlin Wall became the iconic symbol of the Cold War, supposedly proving the superiority of capitalism over communism. However, there is another, little understood side to the story regarding why the wall was erected a half century ago, writes historian William Blum. 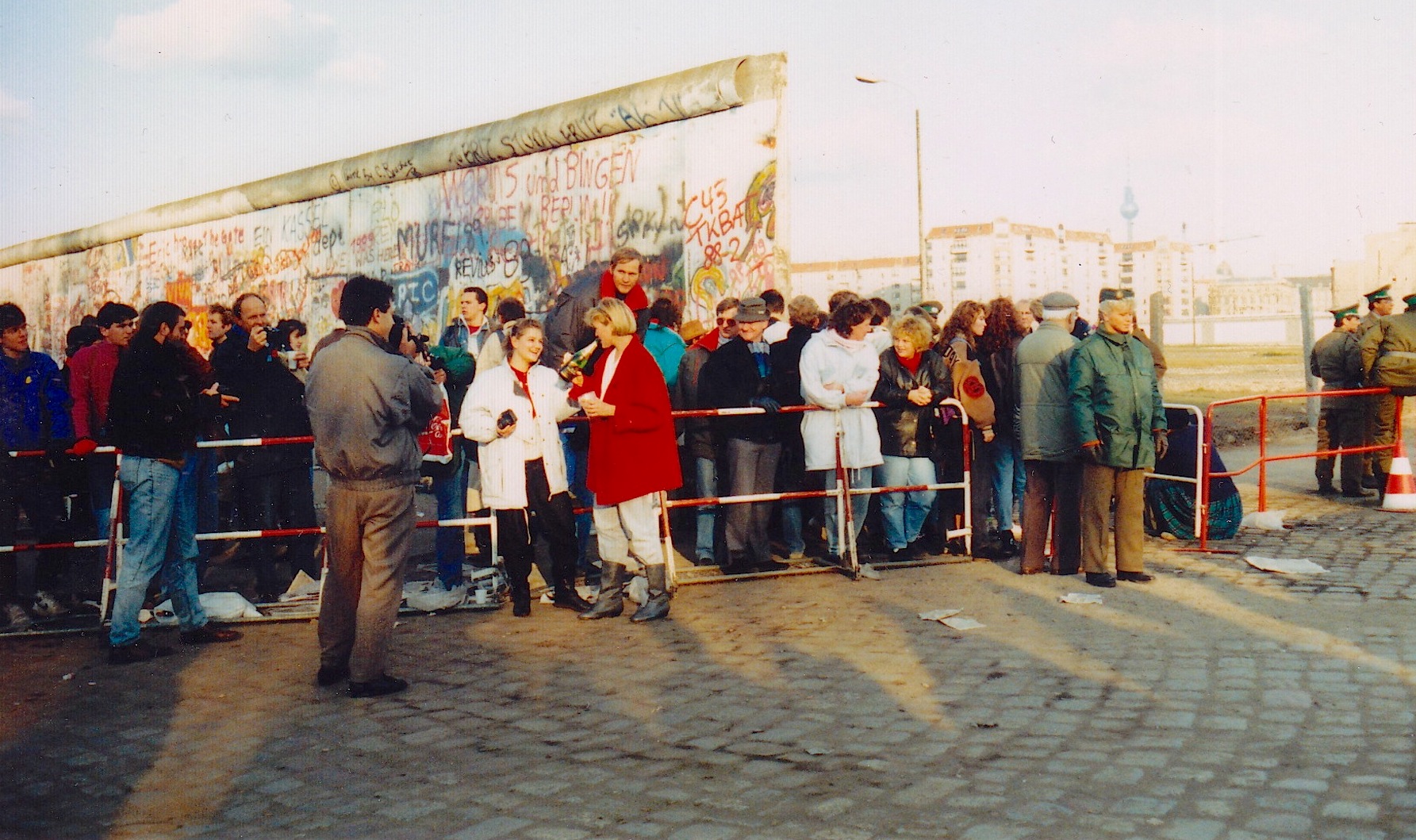 The Western media will soon be revving up their propaganda motors to solemnize the 50th anniversary of the erecting of the Berlin Wall, August 13, 1961.

All the Cold War cliches about The Free World vs. Communist Tyranny will be trotted out and the simple tale of how the wall came to be will be repeated: In 1961, the East Berlin communists built a wall to keep their oppressed citizens from escaping to West Berlin and freedom.

Why? Because commies don’t like people to be free, to learn the “truth.” What other reason could there have been?

First of all, before the wall went up thousands of East Germans had been commuting to the West for jobs each day and then returning to the East in the evening; many others went back and forth for shopping or other reasons. So they were clearly not being held in the East against their will. 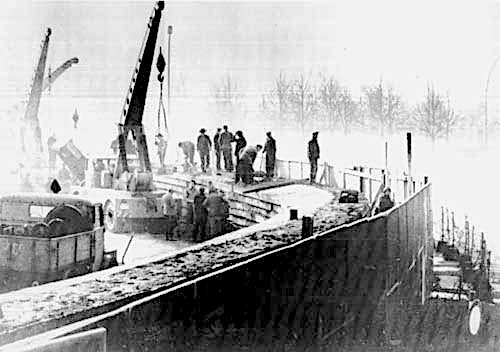 Why then was the wall built? There were two major reasons:

First, the West was bedeviling the East with a vigorous campaign of recruiting East German professionals and skilled workers, who had been educated at the expense of the Communist government. This eventually led to a serious labor and production crisis in the East.

As one indication of this, The New York Times reported in 1963: “West Berlin suffered economically from the wall by the loss of about 60,000 skilled workmen who had commuted daily from their homes in East Berlin to their places of work in West Berlin.” [New York Times, June 27, 1963]

In 1999, USA Today reported: “When the Berlin Wall crumbled [1989], East Germans imagined a life of freedom where consumer goods were abundant and hardships would fade. Ten years later, a remarkable 51 percent say they were happier with communism.” [USA Today, October 11, 1999] 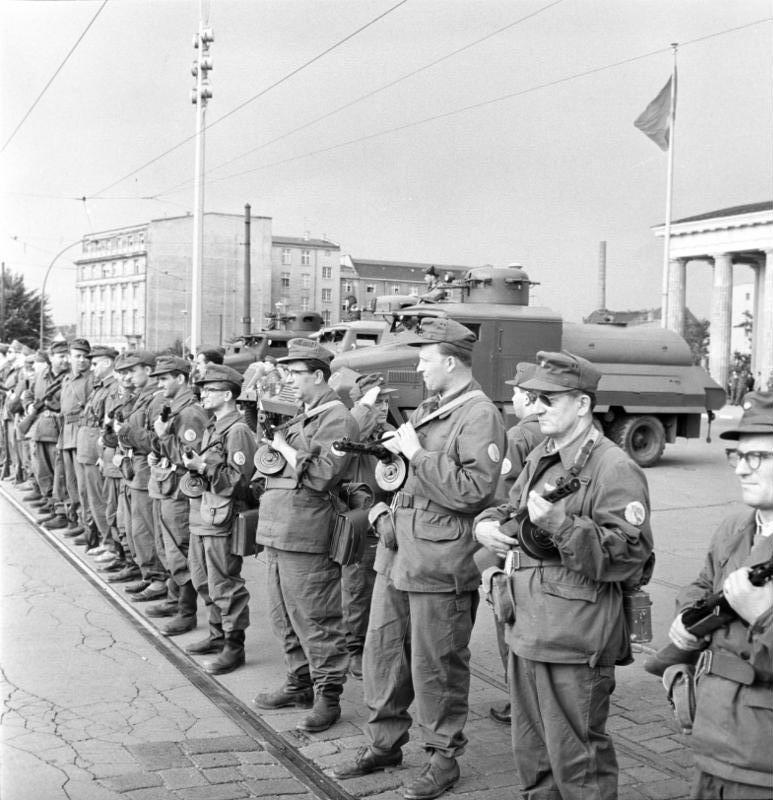 East German Combat Groups of the Working Class close the border on 13 August 1961 in preparation for the Berlin Wall construction. (Bundesarchiv/Wikipedia)

Earlier polls would likely have shown even more than 51 percent expressing such a sentiment, for in the ten years many of those who remembered life in East Germany with some fondness had passed away; although even 10 years later, in 2009, The Washington Post could report:

“Westerners say they are fed up with the tendency of their eastern counterparts to wax nostalgic about communist times.” [Washington Post, May 12, 2009]

It should also be noted that the division of Germany into two states in 1949, setting the stage for 40 years of Cold War hostility, was an American decision, not a Soviet one: Carolyn Eisenberg, Drawing the Line: The American Decision to Divide Germany, 1944-1949 (1996); or see a concise review of this book by Kai Bird in The Nation, December 16, 1996]

Second, during the 1950s, American cold warriors in West Germany instituted a crude campaign of sabotage and subversion against East Germany designed to throw that country’s economic and administrative machinery out of gear. 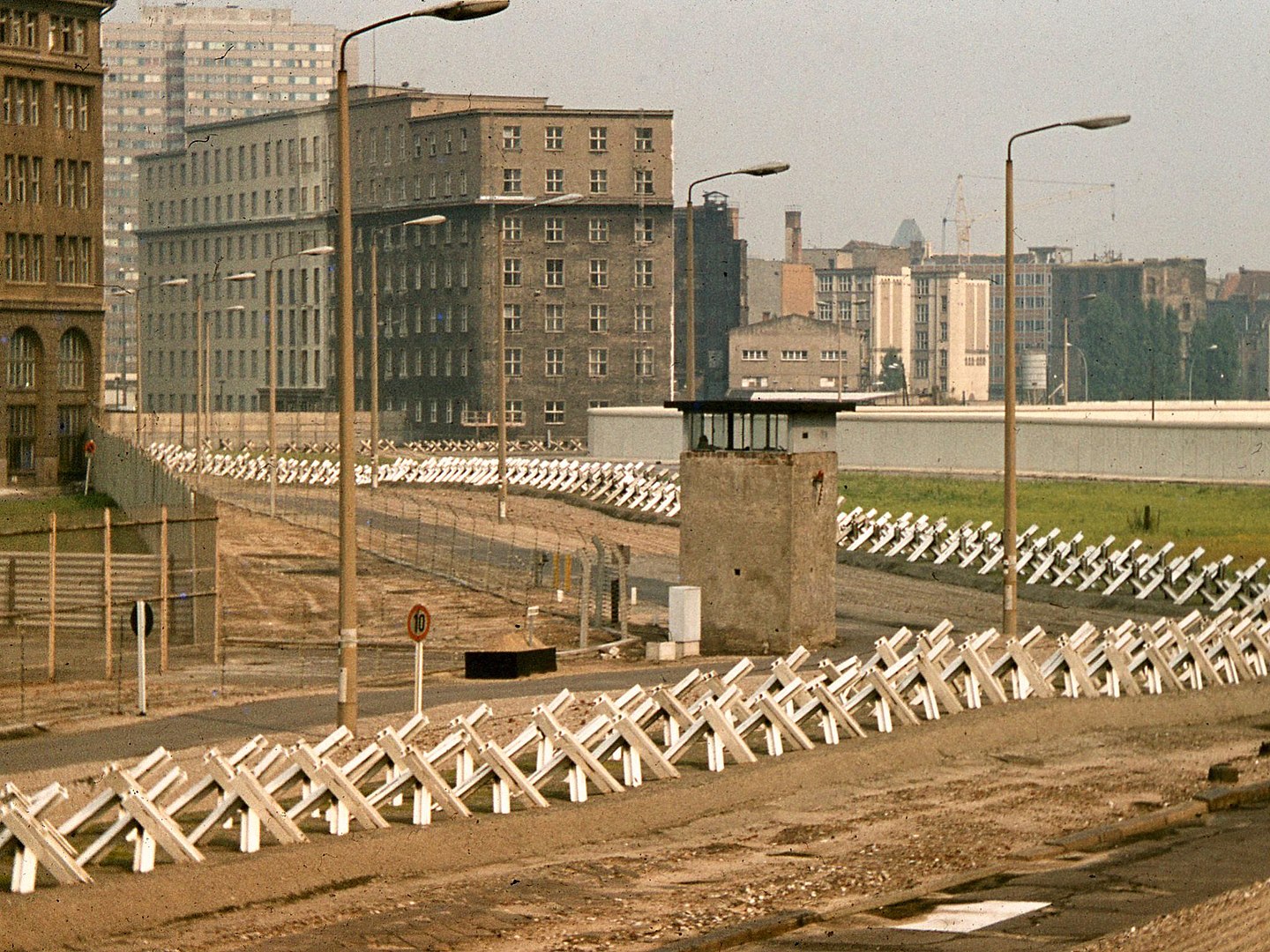 The C.I.A. and other U.S. intelligence and military services recruited, equipped, trained and financed German activist groups and individuals, of West and East, to carry out actions which ran the spectrum from juvenile delinquency to terrorism; anything to make life difficult for the East German people and weaken their support of the government; anything to make the commies look bad.

It was a remarkable undertaking.

“The United States and its agents used explosives, arson, short circuiting, and other methods to damage power stations, shipyards, canals, docks, public buildings, gas stations, public transportation, bridges, etc; they derailed freight trains, seriously injuring workers; burned 12 cars of a freight train and destroyed air pressure hoses of others; used acids to damage vital factory machinery; put sand in the turbine of a factory, bringing it to a standstill; set fire to a tile-producing factory; promoted work slow-downs in factories; killed 7,000 cows of a co-operative dairy through poisoning; added soap to powdered milk destined for East German schools; were in possession, when arrested, of a large quantity of the poison cantharidin with which it was planned to produce poisoned cigarettes to kill leading East Germans; set off stink bombs to disrupt political meetings; attempted to disrupt the World Youth Festival in East Berlin by sending out forged invitations, false promises of free bed and board, false notices of cancellations, etc.; carried out attacks on participants with explosives, firebombs, and tire-puncturing equipment; forged and distributed large quantities of food ration cards to cause confusion, shortages and resentment; sent out forged tax notices and other government directives and documents to foster disorganization and inefficiency within industry and unions … all this and much more.” [See William Blum, Killing Hope: US Military and CIA Interventions Since World War II, p.400, note 8, for a list of sources for the details of the sabotage and subversion. ]

The Woodrow Wilson International Center for Scholars, of Washington, DC, conservative cold warriors, in one of their Cold War International History Project Working Papers (#58, p.9) states: “The open border in Berlin exposed the GDR [East Germany] to massive espionage and subversion and, as the two documents in the appendices show, its closure gave the Communist state greater security.” 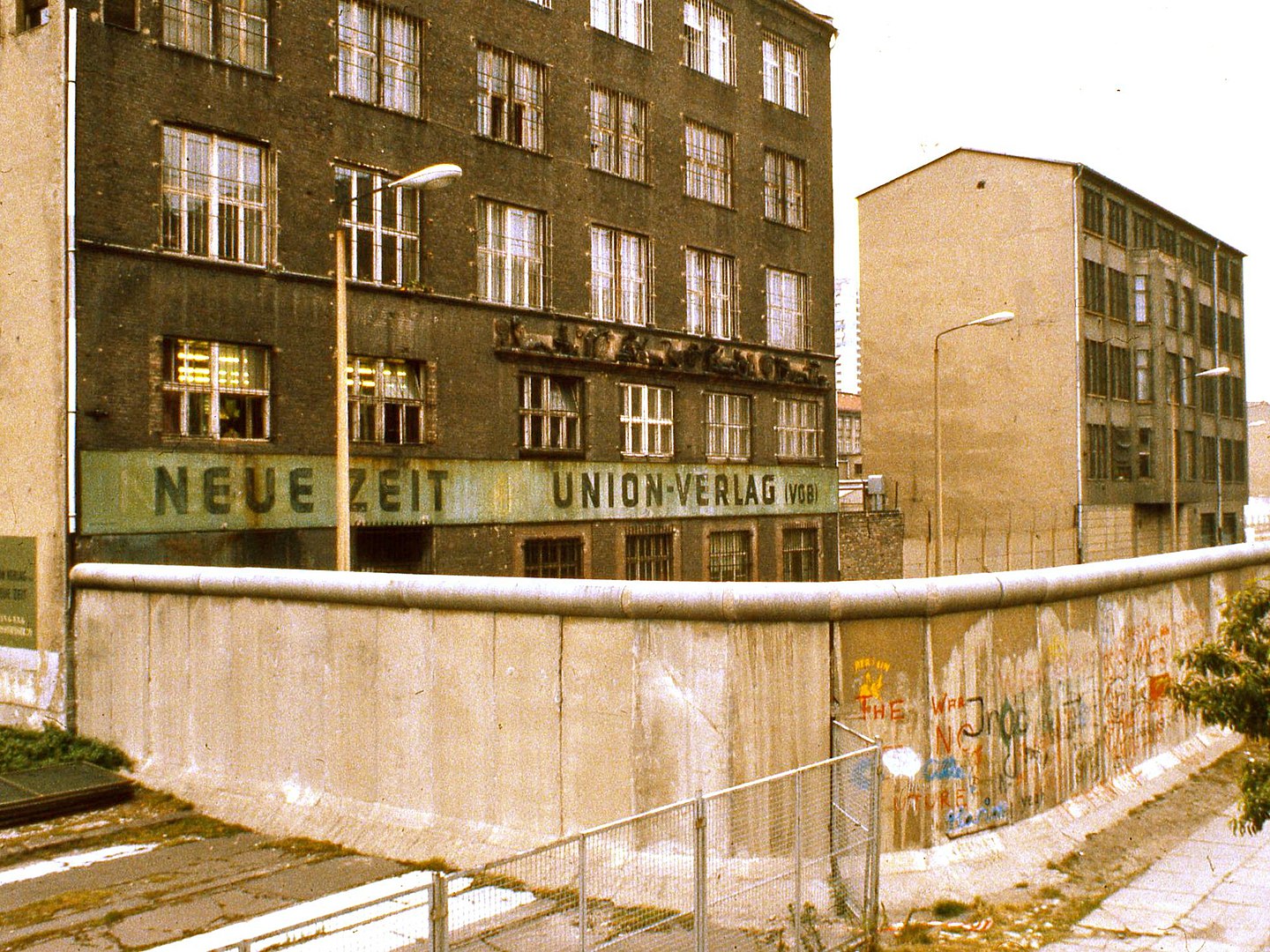 Throughout the 1950s, the East Germans and the Soviet Union repeatedly lodged complaints with the Soviets’ erstwhile allies in the West and with the United Nations about specific sabotage and espionage activities and called for the closure of the offices in West Germany they claimed were responsible, and for which they provided names and addresses.

Their complaints fell on deaf ears.

Inevitably, the East Germans began to tighten up entry into the country from the West, leading eventually to the infamous Wall. However, even after the wall was built there was regular, albeit limited, legal emigration from east to west.

In 1984, for example, East Germany allowed 40,000 people to leave. In 1985, East German newspapers claimed that more than 20,000 former citizens who had settled in the West wanted to return home after becoming disillusioned with the capitalist system. The West German government said that 14,300 East Germans had gone back over the previous 10 years. [The Guardian (London), March 7, 1985]

Let’s also not forget that Eastern Europe became communist because Hitler, with the approval of the West, used it as a highway to reach the Soviet Union to wipe out Bolshevism forever, and that the Russians in World War I and II, lost about 40 million people because the West had used this highway to invade Russia.

It should not be surprising that after World War II the Soviet Union was determined to close down the highway. 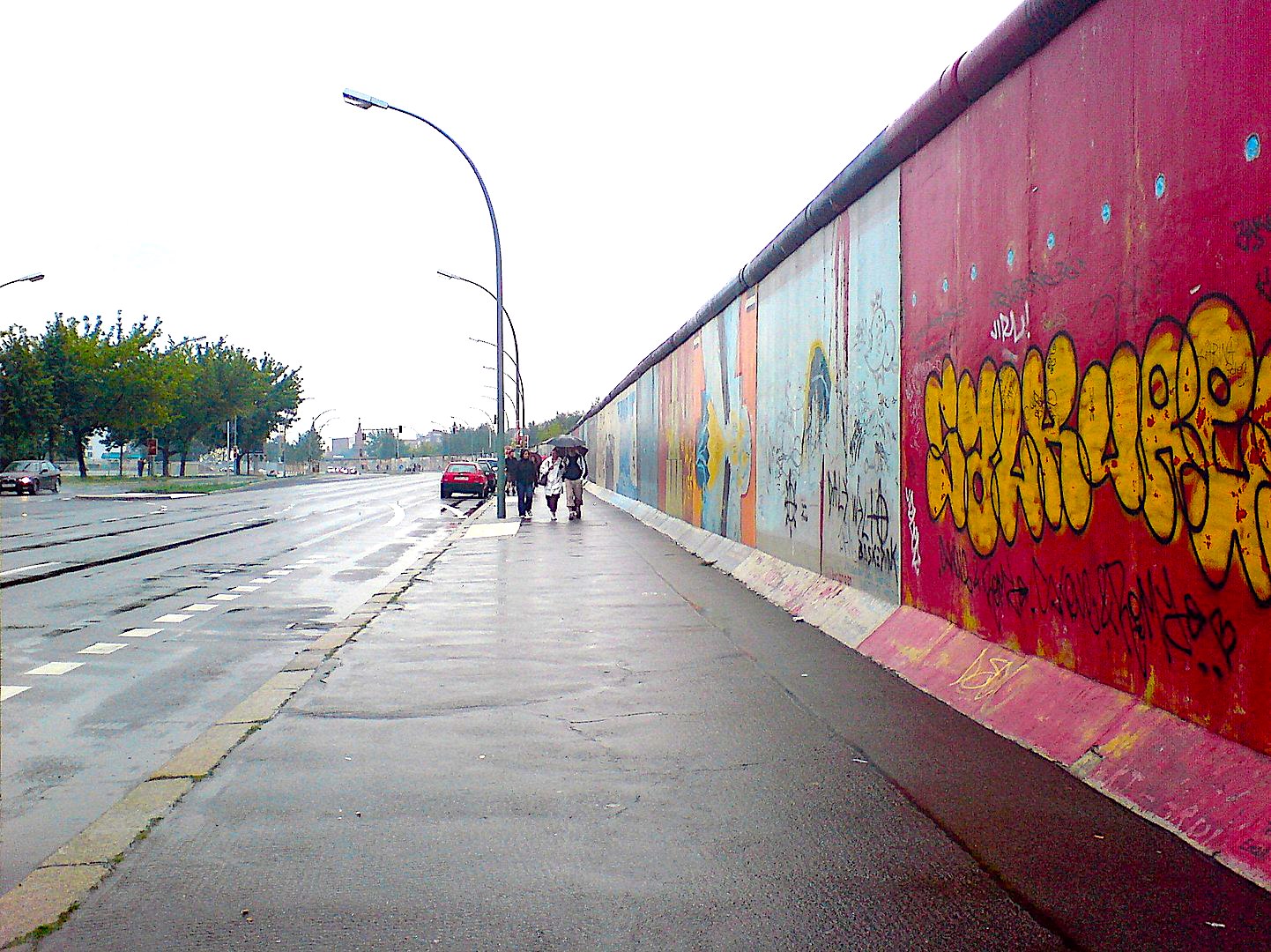 Remaining stretch of the Wall near Ostbahnhof in Friedrichshain called East Side Gallery, August 2006. (Herraotic/Wikipedia)

William Blum was the author of Killing Hope: US Military and CIA Interventions Since World War 2; Rogue State: A Guide to the World’s Only Superpower; West-Bloc Dissident: A Cold War Memoir; Freeing the World to Death: Essays on the American Empire. Portions of the books can be read at www.killinghope.org. This article was originally published in Blum’s Anti-Empire Report.

6 comments for “The Other Side of the Berlin Wall”