The progressive Democrat is a myth. The U.S. has two warmongering oligarchic parties and a tremendous amount of narrative management to keep people plugged in to that fraudulent political paradigm. 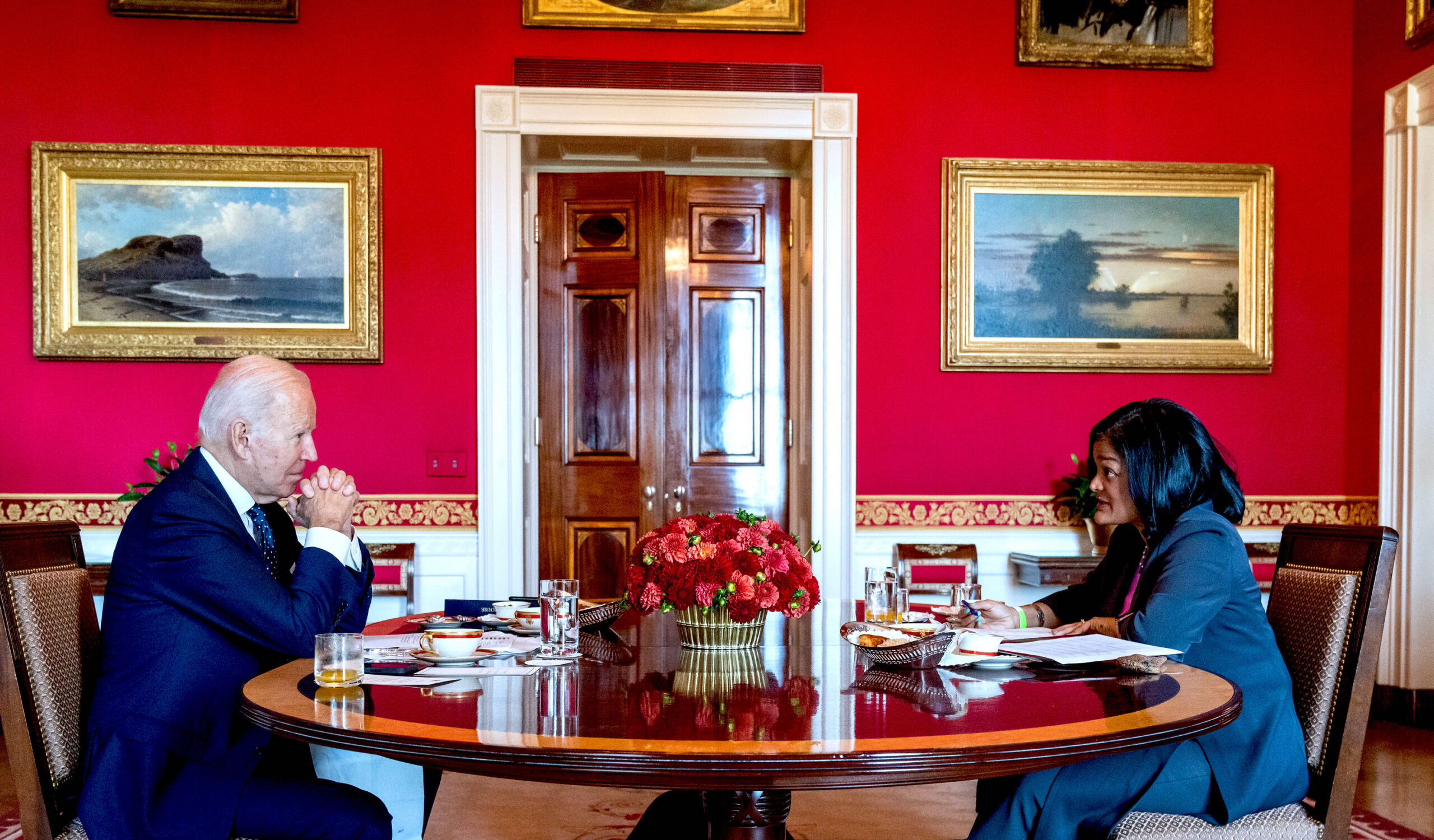 The Congressional Progressive Caucus has retracted an extremely mild, toothless letter its members had written to President Joe Biden politely asking him to consider adding a little diplomacy into the mix to help end the conflict in Ukraine. The retraction followed a deluge of public outrage against their slight deviation from the official imperial narrative.

If you actually read the original letter signed by House progressives including Reps. Alexandria Ocasio-Cortez, Ilhan Omar, Ayanna Pressley, Rashida Tlaib, Jamaal Bowman and Ro Khanna, you will quickly see that it’s as innocuous and anodyne as any statement could possibly be while still containing words. It opens with effusive praise for Biden’s interventionism in Ukraine and condemns the Russian government unequivocally throughout, offering only the humble suggestion that Biden “pair the military and economic support the United States has provided to Ukraine with a proactive diplomatic push, redoubling efforts to seek a realistic framework for a ceasefire.” Its authors make it abundantly clear that they support making sure such diplomacy is agreeable to Ukraine at every step of the way.

This impotent nothing salad was bizarrely spun by The Washington Post as a call on Biden to “dramatically shift his strategy on the Ukraine war,” despite nothing that could be remotely construed as “dramatic” existing anywhere in the body of the text.

The letter received backlash from warmongers in both parties, including from House Speaker Nancy Pelosi. It was personally slammed by Sen. Bernie Sanders, the pope of American progressivism. Trolls and warmongers swarmed the social media notifications of every account which posted the letter in an official capacity, mindlessly bleating the words “appeasement” and “Chamberlain” in unison.

Oh my god the replies to this tweet, Jesus fucking Christ everyone is bat shit fucking insane https://t.co/lSGbNnxZ7A

In a statement on the retraction of the letter, Congressional Progressive Caucus Chair Pramila Jayapal says she accepts responsibility for the publication of the offending act of peacemongering while in the same breath blaming its publication on her staff.

“The letter was drafted several months ago, but unfortunately was released by staff without vetting. As Chair of the Caucus, I accept responsibility for this,” Jayapal said. 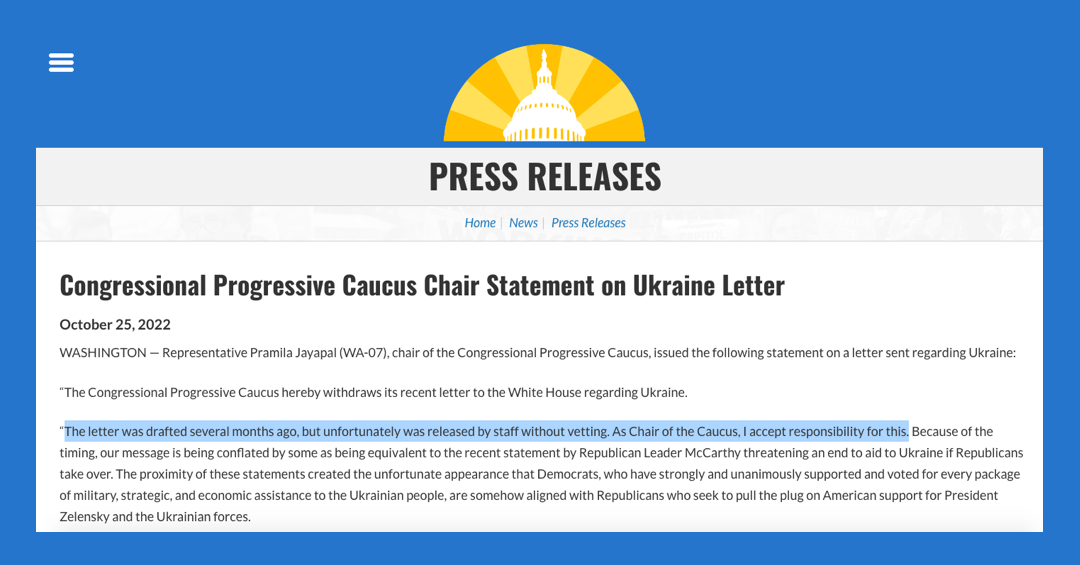 “Every war ends with diplomacy, and this one will too after Ukrainian victory,” the statement reads, ignoring mainstream reports that U.S. officials quietly believe Ukraine stands no chance at outright victory in this war. “The letter sent yesterday, although restating that basic principle, has been conflated with GOP opposition to support for the Ukrainians’ just defense of their national sovereignty. As such, it is a distraction at this time and we withdraw the letter.”

Empire critics were quick to highlight the obsequious nature of this retraction.

“For progressives, I didn’t think it could get more pathetic than voting for a disastrous proxy war that the US provoked and prolonged, handing billions to arms makers in the process. In retracting their tepid call for diplomacy and blaming staffers for it, they somehow surpassed it,” tweeted Aaron Maté.

For progressives, I didn't think it could get more pathetic than voting for a disastrous proxy war that the US provoked & prolonged, handing billions to arms makers in the process. In retracting their tepid call for diplomacy & blaming staffers for it, they somehow surpassed it: https://t.co/kyONvPlifY

“Certainly speaks to the insanely hawkish atmosphere in Washington that pressured the progressive caucus to withdrawal a totally reasonable, responsible and necessary call for diplomacy in a conflict that risks escalating to nuclear armageddon,” tweeted Rania Khalek.

“Imagine being elected to Congress based on promises of challenging ‘the establishment’ or whatever, then being so petrified of anger from bipartisan DC establishment mavens that you can’t even wait 24 hours before meekly retracting the only mild dissent you’ve expressed,” tweeted Glenn Greenwald.

I don’t know what pressures were the ultimate deciding factor in the caucus’ decision to retract its feeble advocacy for a bit more diplomacy, or how much of that pressure was brought to bear behind the scenes by bigger political monsters in the Beltway swamp, but ultimately it doesn’t matter. The important take-home from this lesson, once again, is that progressive Democrats are worse than worthless at opposing the mechanisms of oligarchy and empire.

In fact, if you look at their actions it’s not even really accurate to describe them as “progressive Democrats” as though they are a faction that has meaningful differences from the rest of that party. Aside from the occasional empty sound byte about healthcare or debt forgiveness, they’re not doing anything to advance progressive agendas which make American lives better, and they’re certainly doing nothing to impede the expansion of the U.S. war machine.

The progressive Democrat is a myth, like the good billionaire or the righteous American war. “The Squad” is nothing more than the social media-savvy branch of the Democratic establishment. The United States has two warmongering oligarchic parties, and a tremendous amount of narrative management goes into manipulating, cajoling and coercing Americans into staying psychologically plugged in to that fraudulent political paradigm.

This comes at the same time the defense minister of Romania was forced to resign for saying peace talks were necessary to achieve peace in Ukraine. It just reveals so much about where we are and where we’re headed that the most incendiary and outrageous thing you can say in our society is that we should probably attempt to diplomatically de-escalate hostilities between nuclear superpowers. The fact that the Overton window of acceptable political discourse has already been dragged that far in the direction of warmongering insanity prevents peace from ever having any space to get a word in edgewise.

← My 10 Years of Reporting on AFRICOM
Chris Hedges: My War Never Ends →