The judicial proceedings against Julian Assange give a faux legality to the state persecution of the most important and courageous journalist of our generation.

This is the speech given by Chris Hedges outside the Department of Justice in Washington, D.C., on Saturday, Oct. 8, at a rally that called on the U.S. to revoke its extradition request for Julian Assange.

Merrick Garland and those who work in the Department of Justice are the puppets, not the puppet masters. They are the façade, the fiction, that the longstanding persecution of Julian Assange has something to do with justice. Like the High Court in London, they carry out an elaborate judiC.I.A.l pantomime. They debate arcane legal nuances to distract from the Dickensian farce where a man who has not committed a crime, who is not a U.S. citizen, can be extradited under the Espionage Act and sentenced to life in prison for the most courageous and consequential journalism of our generation.

The engine driving the lynching of Julian is not here on Pennsylvania Avenue. It is in Langley, Virginia, located at a complex we will never be allowed to surround – the Central Intelligence Agency. It is driven by a secretive inner state, one where we do not count in the mad pursuit of empire and ruthless exploitation. Because the machine of this modern leviathan was exposed by Julian and WikiLeaks, the machine demands revenge.

The United States has undergone a corporate coup d’etat in slow motion. It is no longer a functioning democracy. The real centers of power, in the corporate, military and national security sectors, were humiliated and embarrassed by WikiLeaks. Their war crimes, lies, conspiracies to crush the democratic aspirations of the vulnerable and the poor, and rampant corruption, here and around the globe, were laid bare in troves of leaked documents.

We cannot fight on behalf of Julian unless we are clear about whom we are fighting against. It is far worse than a corrupt judiC.I.A.ry. The global billionaire class, who have orchestrated a soC.I.A.l inequality rivaled by pharaonic Egypt, has internally seized all of the levers of power and made us the most spied upon, monitored, watched and photographed population in human history. When the government watches you 24-hours a day, you cannot use the word liberty. This is the relationship between a master and a slave. Julian was long a target, of course, but when WikiLeaks published the documents known as Vault 7, which exposed the hacking tools the C.I.A. uses to monitor our phones, televisions and even cars, he — and journalism itself — was condemned to crucifixion.

The object is to shut down any investigations into the inner workings of power that might hold the ruling class accountable for its crimes, eradicate public opinion and replace it with the cant fed to the mob.

I spent two decades as a foreign correspondent on the outer reaches of empire in Latin America, Africa, the Middle East and the Balkans. I am acutely aware of the savagery of empire, how the brutal tools of repression are first tested on those Frantz Fanon called “the wretched of the earth.” Wholesale surveillance. Torture. Coups. Black sites. Black propaganda. Militarized police. Militarized drones. Assassinations. Wars. 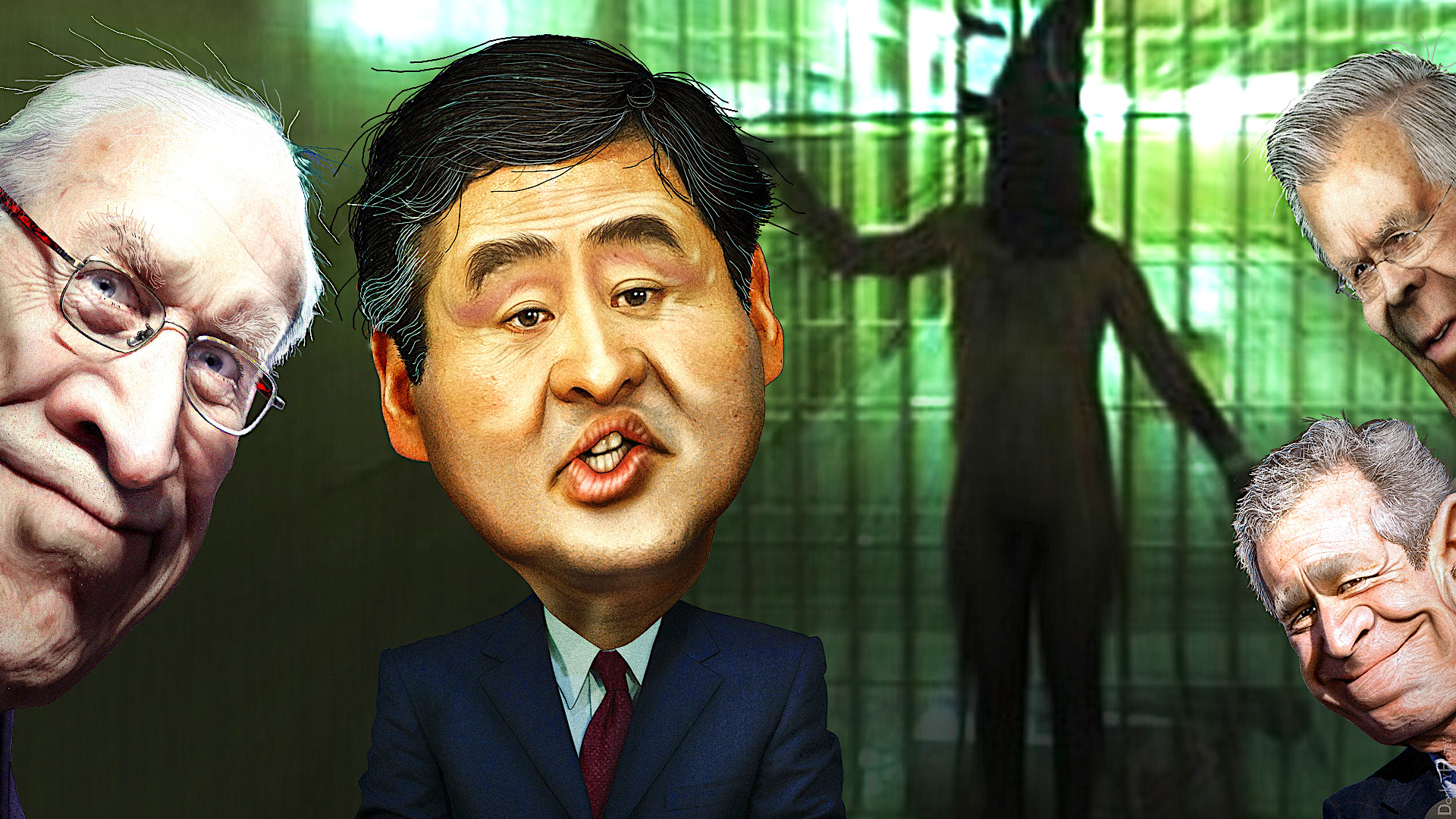 Once perfected on people of color overseas, these tools migrate back to the homeland. By hollowing out our country from the inside through deindustrialization, austerity, deregulation, wage stagnation, the abolition of unions, massive expenditures on war and intelligence, a refusal to address the climate emergency and a virtual tax boycott for the richest individuals and corporations, these predators intend to keep us in bondage, victims of a corporate neo-feudalism. And they have perfected their instruments of Orwellian control. The tyranny imposed on others is imposed on us.

From its inception, the C.I.A. carried out assassinations, coups, torture and illegal spying and abuse, including that of U.S. citizens, activities exposed in 1975 by the Church Committee hearings in the Senate and the Pike Committee hearings in the House. All these crimes, especially after the attacks of 9/11, have returned with a vengeance. The C.I.A. is a rogue and unaccountable paramilitary organization with its own armed units and drone program, death squads and a vast archipelago of global black sites where kidnapped victims are tortured and disappeared.

The U.S. allocates a secret black budget of about $50 billion a year to hide multiple types of clandestine projects carried out by the National Security Agency, the C.I.A. and other intelligence agencies, usually beyond the scrutiny of Congress. The C.I.A. has a well-oiled apparatus to kidnap, torture and assassinate targets around the globe, which is why, since it had already set up a system of 24-hour video surveillance of Julian in the Ecuadorean Embassy in London, it quite naturally discussed kidnapping and assassinating him. That is its business. Senator Frank Church — after examining the heavily redacted C.I.A. documents released to his committee — defined the C.I.A.’s “covert activity” as “a semantic disguise for murder, coercion, blackmail, bribery, the spreading of lies and consorting with known torturers and international terrorists.” 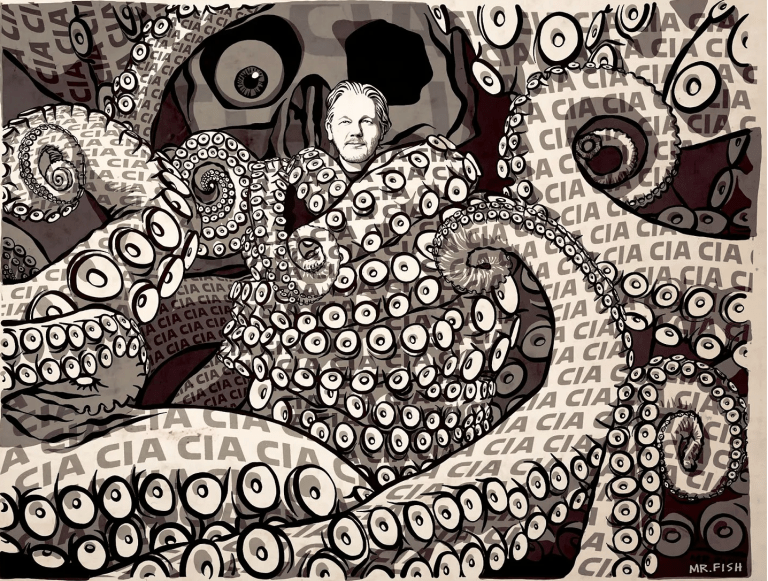 Armed and Dangerous – by Mr. Fish.

All despotisms mask state persecution with sham court proceedings. The show trials and troikas in Stalin’s Soviet Union. The raving Nazi judges in fascist Germany. The Denunciation rallies in Mao’s China. State crime is cloaked in a faux legality, a judicial farce.

If Julian is extradited and sentenced and, given the Lubyanka-like proclivities of the Eastern District of Virginia, this is a near certainty, it means that those of us who have published classified material, as I did when I worked for The New York Times, will become criminals. It means that an iron curtain will be pulled down to mask abuses of power. It means that the state, which, through Special Administrative Measures, or SAMs, anti-terrorism laws and the Espionage Act that have created our homegrown version of Stalin’s Article 58, can imprison anyone anywhere in the world who dares commit the crime of telling the truth.

We are here to fight for Julian. But we are also here to fight against powerful subterranean forces that, in demanding Julian’s extradition and life imprisonment, have declared war on journalism.

We are here to fight for Julian. But we are also here to dismantle the wholesale Stasi-like state surveillance erected across the West.

We are here to fight for Julian. But we are also here to overthrow — and let me repeat that word for the benefit of those in the F.B.I. and Homeland Security who have come here to monitor us — overthrow the corporate state and create a government of the people, by the people and for the people, that will cherish, rather than persecute, the best among us.

You can see my interview with Julian’s father, John Shipton, here.

10 comments for “Chris Hedges: The Puppets & the Puppet Masters”