Protests around the world supported the human chain that formed around the British parliament in support of an imprisoned publisher, reports Mohamed Elmaazi. 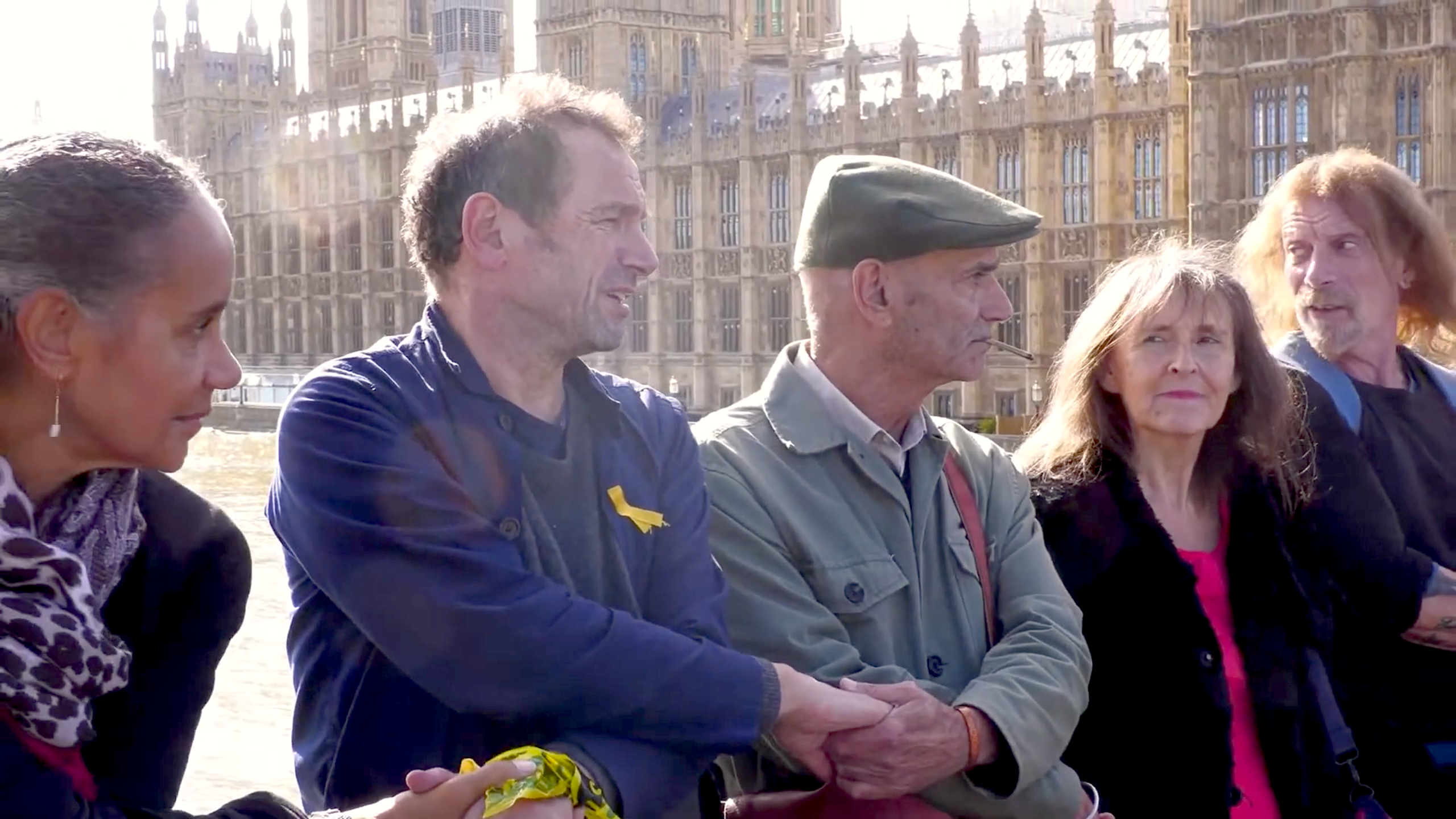 Thousands of supporters of Julian Assange descended upon London’s Palace of Westminster to form a human chain around the Houses of Parliament in support of the embattled WikiLeaks publisher on Saturday.

Meanwhile, the London action was backed up by rallies in Melbourne, Australia, Washington D.C., San Francisco and other locales.

In the British capital, men and women from a myriad of backgrounds attended the demonstration from across the U..K, and beyond, including from France, Germany and the United States. It was the first known human chain to surround the Houses of Parliament.

Stella Assange, wife of the imprisoned publisher, said around 5,000 people showed up to form the chain despite a nation-wide strike announced by the National Union of Rail, Maritime and Transportation Workers (RMT). Other estimates put the crowd as high as 7,000.

The chain extended over Westminster Bridge to Lambeth on the other side of the River Thames and then along the south bank and over Lambeth Bridge, through Victoria Tower Gardens to the front of Parliament, a distance of about 2.5 kilometers. Hundreds of other supporters also attended the demonstration, albeit without joining the human chain.

“The Human chain is self-proving” Stella Assange said. “Julian has enormous support and much more. He has millions of people around the world who are disgusted by the injustice that is unfolding.” 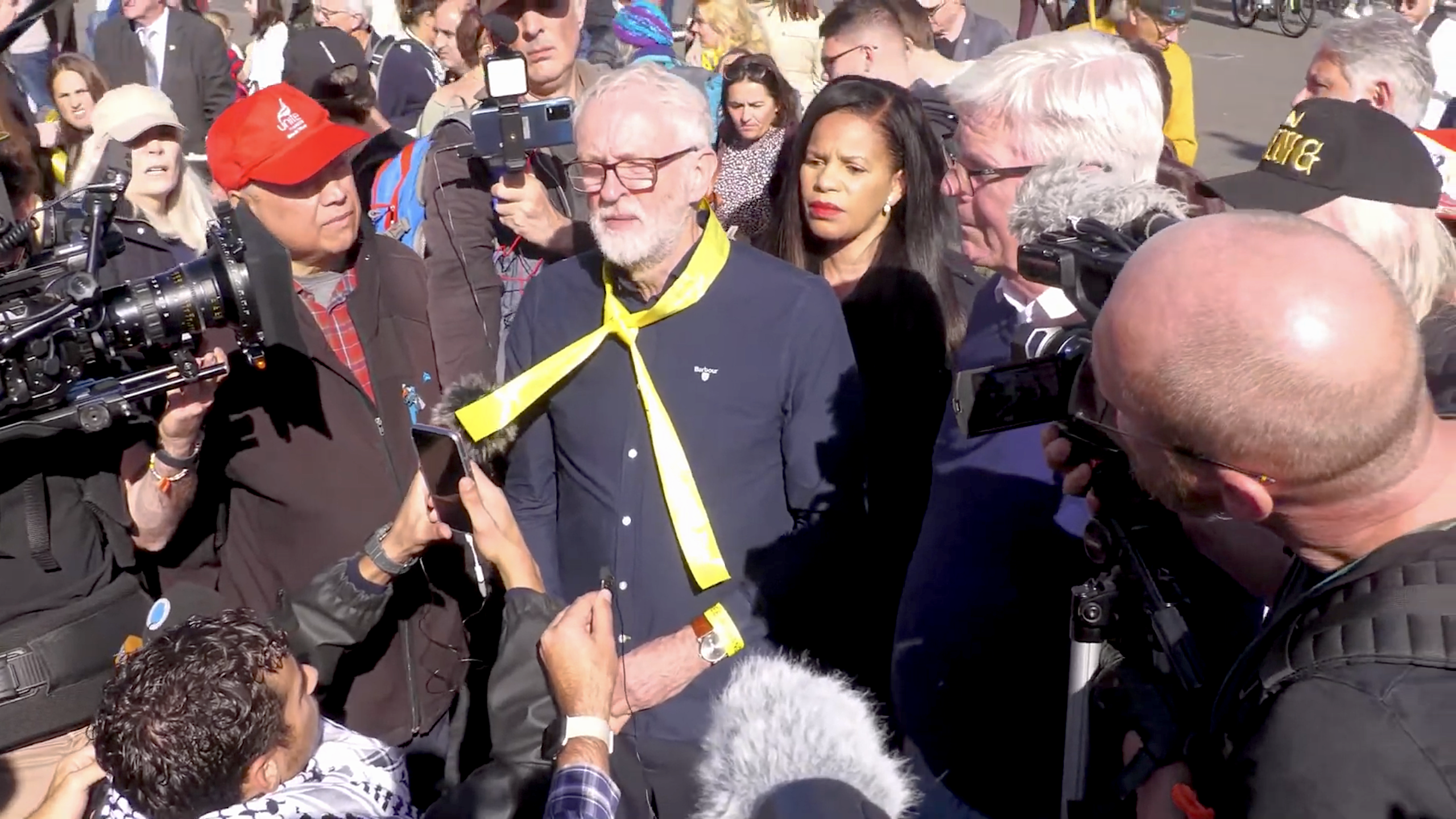 If we believe in free speech, if we believe in independent, democratic journalism, then Julian Assange should be freed from Belmarsh and not removed to the United States. Today we’ve shown the levels of public support for Julian by having this huge human chain all around Parliament despite the obvious transport difficulties today because of the rail strike. Internationally there is huge support for Julian Assange. … So my message to journalists around the world is, take up your chosen profession to take on a responsibility to tell the truth without fear nor favor. Tell the truth about Julian and say to the British government, refuse the extradition.”

Kristinn Hrafnsson, WikiLeaks’ editor-in-chief, told Consortium News: “To surround parliament here with thousands and thousands of people showing their support for Julian Assange was extremely important, and sends a signal to the rest of society here that this must come to an end. That Julian Assange cannot be extradited, that the charges against him must be dropped.”

Williams said people should “contrast” the “luxurious surroundings” Chilean military dictator Augusto Pinochet was held in whilst being detained in England on an extradition request from Spain to the conditions Assange has been subjected to in Belmarsh Prison. He condemned the silence from the “overwhelming majority” of British parliamentarians on Assange’s conditions.

“Surely, anybody who is concerned about the life of an individual, the messenger of truth, should be here,” Roshan Pedder, an Assange support from Surrey, South East England explained. “Anybody who is concerned about the freedom of the press should be here. We need to make a strong statement to the Government that Julian Assange has been persecuted by their friends in Washington for far too long and it has to stop.”

“Without freedom of speech, without free journalism, we are all at risk,” said Dr. Bob Gill, producer of the documentary The Great NHS Heist.

Ann Batiza, a member of the national organizing committee of the U.S.-based Assange Defense, came from Milwaukee, Wisconsin. Extraditing Assange to the U.S. would “criminalize the publication of classified documents which is the heart of adversarial national security journalism.”

Vinnie De Stefano, also of Assange Defense, came from Los Angeles. “We are facing the most important crisis of our time, a crisis of freedom of the press,” he said. If Assange is convicted under the Espionage Act, “he’ll spend the rest of his life in jail but he won’t be alone in jail, our freedom of the press in the States and in the rest of the world… will be imprisoned with him.”

Tim Dawson, a longtime member of the U.K. National Union of Journalist’s national executive council, said: “The risks posed by the attempts to prosecute Julian Assange puts in jeopardy all free journalism. He has only ever carried out the actions of a journalist, those actions will be threatened for all journalists if he is allowed to be prosecuted. I’m calling on the British government to throw out this extradition and to allow him to go free today.”

Also present was Kolja, who traveled, by foot at least 892 miles from his hometown in Hamburg, Germany.

“In times like these, acts like these are necessary,” Kolja, known only by his first name, told Consortium News. “Julian Assange is… 12 years now imprisoned …” under “house arrest, embassy, maximum security prison and now criminal charges.”

“Priti Patel [the former home secretary] had to decide whether he is allowed to be extradited and then I started to walk,” he said. “I kind of wanted to say ‘no’ this is not done in our names, I really would like to have democracy. Without information we cannot make an informed decision. So, Julian Assange is one of the greatest symbols of our time of a free press.”

Kolja left Hamburg on July 2 and arrived in Dover on Sept. 2.

The mainstream British media ignored or underreported the extraordinary event. The Independent said only “hundreds” of people showed up, as did The Daily Mail. The Guardian, The Times, The Sunday Times had no report at all. The BBC hasn’t had a story about Assange since July 1. 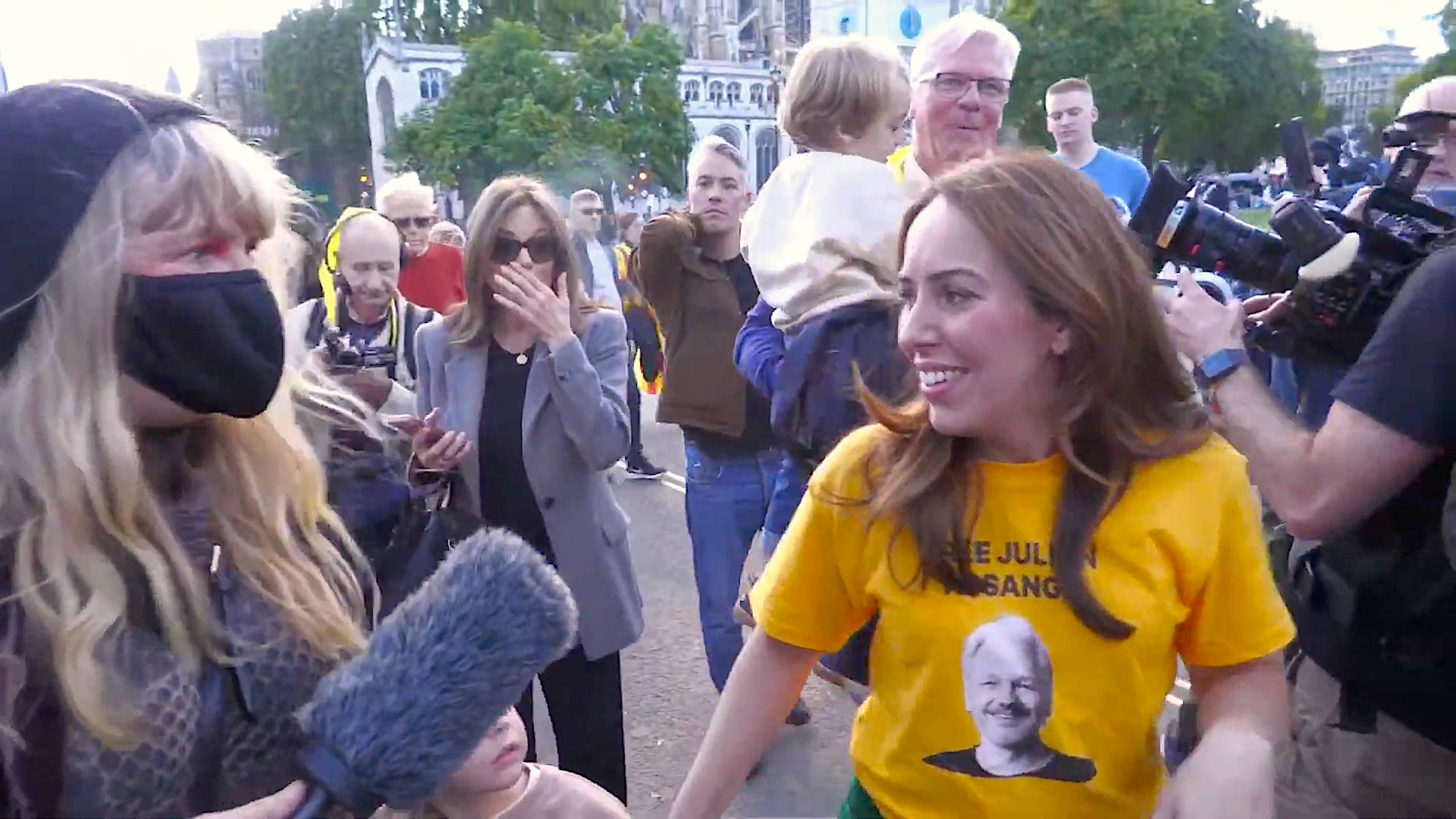 The event was organized by WikiLeaks’ official Don’t Extradite Assange (DEA) campaign with the support of the NUJ as well as the European Federation of Journalists (EFJ) and the International Federation of Journalists (IFJ). The IFJ, along with the EFJ and NUJ, represents “600,000 media professionals from 187 trade unions and associations in more than 140 countries”, its website says.

“We’ve had a few emails from supporters saying they emailed RMT requesting them to move their strike”, DEA told Consortium News. Birmingham Stop The War campaign also organized a coach to help people to get to London. People driving from different cities also offered their extra car seats to other people trying to get to London, DEA added.

The RMT has been engaged in a rolling series of strikes over the summer over the termination of thousands of jobs and poor pay resulting in the suspension of train and tube journeys across England and Wales. Four train operators had no services operating on the day with 18 more offering only a “limited service.”

The cancellation of trains across England likely reduced the overall attendance figures in the end, with people noting their desire to attend on social media but also  the difficulty of getting there and back.

The event was publicized via social media, adverts in widely read newspapers like The Guardian, Evening Standard and Camden News Journal and as well as via volunteers leafleting across the U.K.

Actions Around the World 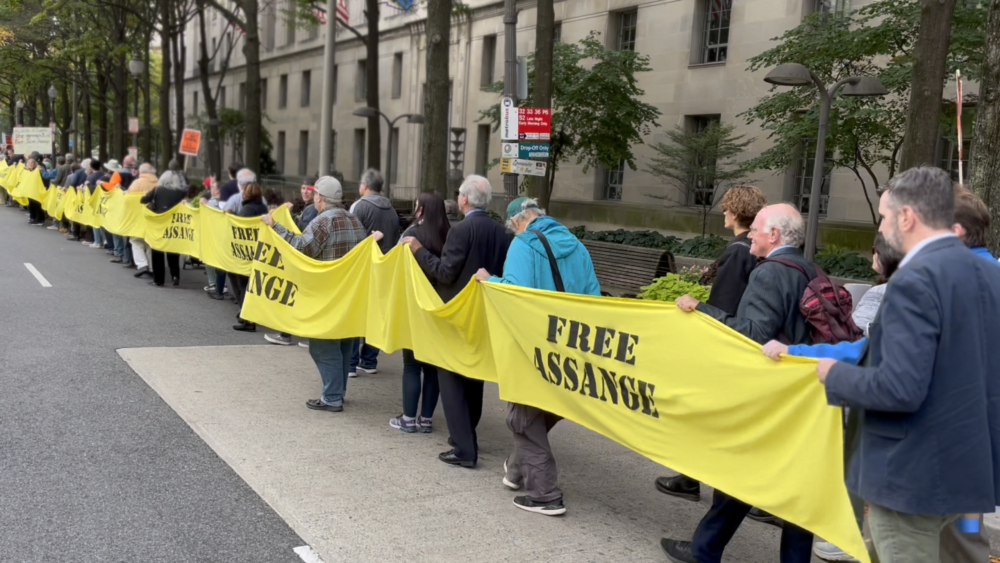 In solidarity with the London events, about 5,000 people crowded across Prince’s Bridge in the central business district of Melbourne, where they heard Assange’s father and brother, John and Gabriel Shipton, address supporters. In San Francisco Assange defenders crowded Harry Bridges Plaza to hear speakers support Assange.

In Washington about 300 protestors with a 240-foot yellow ribbon walked around the Department of Justice building, inside of which the prosecution of Assange is being managed.

“The more you look at this case, the more you become traumatized. This is an assault not only on freedom of the press, it makes a complete mockery of our judicial system, it’s an attack on human rights, it is absolutely unacceptable.”

Ben Cohen, a founder of Ben & Jerry’s ice cream, said: “According to the U.S. government, publishing the truth has become a crime. They are literally killing the messenger.”

Scott Ritter, military analyst, asked: “What has Julian Assange given us?” He has “defined the facts, reported the facts, turned them over to the people so they can judge the facts and hold people accountable for the facts.”

Comic, activist and radio host Randy Credico said, “This is going to be a very tough road to hoe going forward, because there is a lot of apathy and a lot of antipathy towards Julian Assange here in D.C. We are up against a mammoth force. People gotta know how important this is.”

C.I.A. whistleblower John Kiriakou called on the crowd to be outside the courtroom in Alexandria, Virginia every day, should Assange be extradited there.

“[U.S. Attorney General] Merrick Garland and those who work in the Department of Justice are the puppets, not the puppet masters. They are the facade, the fiction that the long-standing persecution of Julian Assange has something to do with justice. … They carry out an elaborate, judicial pantomime. … The engine driving the lynching of Julian is not here on Pennsylvania Avenue. It is in Langley, Virginia located in a complex we would never be allowed to surround, the Central Intelligence Agency.”

Jill Stein at Dept. of Justice in support of Julian Assange. (Joe Lauria)

Where the Case Stands

On Aug. 26 Assange’s lawyers filed Perfected Grounds of Appeal with the High Court and are currently waiting to hear whether they will be permitted to present their arguments that District Judge Vanessa Baraitser erred when ruling against all but one of his grounds opposing extradition to the U.S.

Among the grounds for appeal argued is that Assange is being prosecuted for speech protected under Article 10 of the European Convention of Human Rights, that he is being punished for his political views and opinions, that the US government has “misrepresented the core facts” of the case to the UK courts and that the request itself is an “abuse of process.”

The appeal also challenges then-Home Secretary Priti Patel’s decision to grant extradition on the basis that it violates Article 4 of the U.S.-U.K. Extradition Treaty which prohibits extradition where the prosecution is “politically motivated” or where the alleged crime in question is a “political offense.”

If extradited to the U.S., Assange faces up to 175 years in prison for his role in receiving and publishing government documents without authorization, an act which journalists and publishers around the world engage in on a daily basis.

Cathy Vogan in London contributed to this report.

Mohamed Elmaazi studied law at the School of Oriental and African Studies in London and has contributed to numerous news outlets, including Jacobin, The Dissenter, The Canary, Open Democracy, The Grayzone and The Real News Network. He has covered all of Julian Assange’s extradition hearings.

6 comments for “World-Wide Backing as Parliament Encircled for Assange”