The U.K. anticipated a “serious confrontation between Russia and Ukraine” as far back as 1992, declassified files show, Phil Miller reports. One senior official even questioned whether Ukraine was “a real country.” 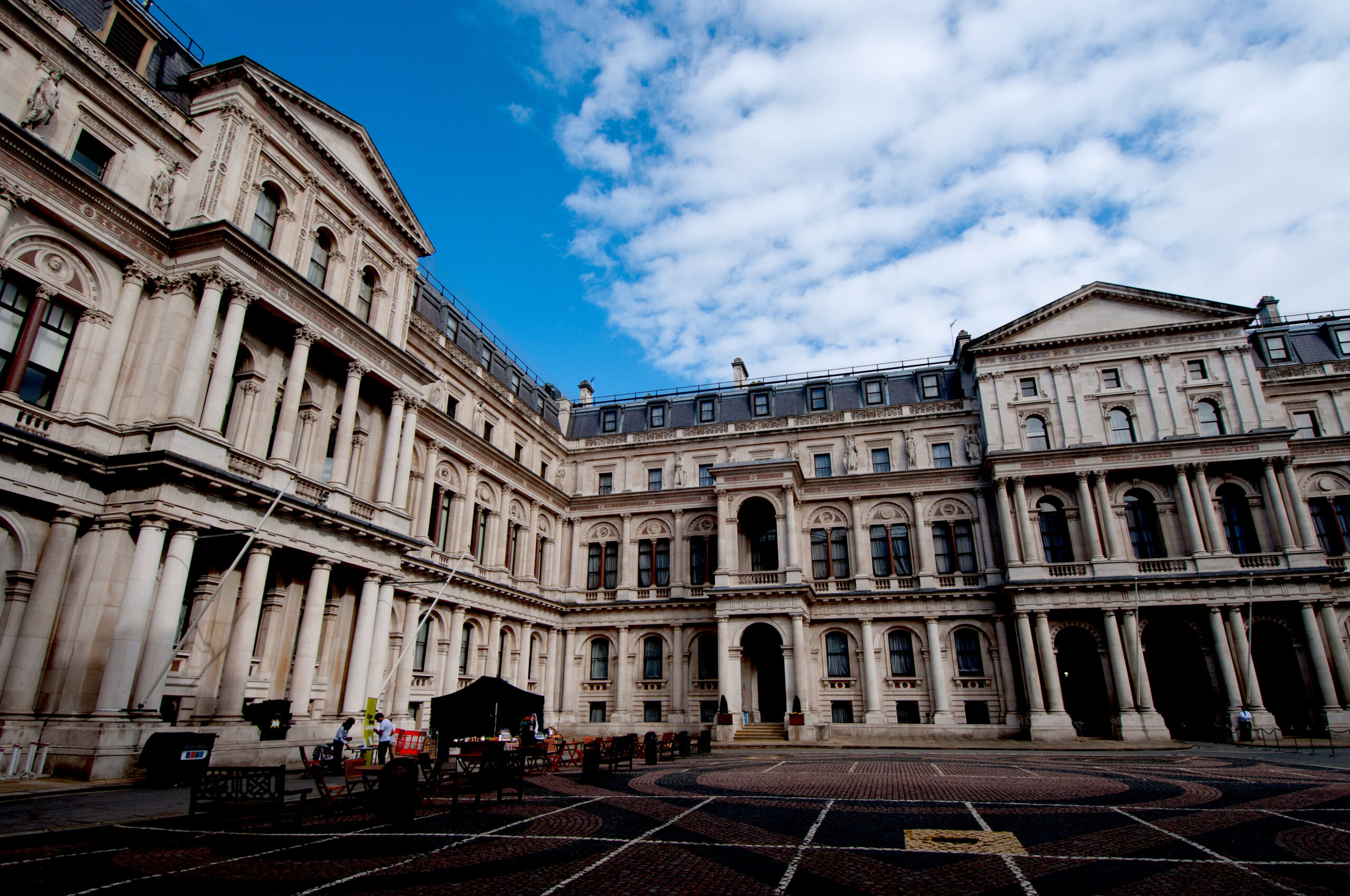 When British intelligence warned that Russian President Vladimir Putin was about to attack Ukraine earlier this year, the spooks’ foresight won many plaudits. Yet their prediction mirrored a scenario Whitehall had long known might unfold.

In May 1992, just six months after the Soviet Union broke up, Britain’s then Prime Minister John Major was being briefed by his staff. They were concerned about a potential clash between Russia and Ukraine over Crimea.

The peninsula in the Black Sea had belonged to Russia until the Soviet Union gifted it to Ukraine in 1954. For the rest of the Cold War, Crimea retained a significant Russian presence, including a strategically important warm water port for the Kremlin’s navy.

Such was the strength of Russia’s legacy in the area that during the 1990s local politicians wanted a referendum on independence from Ukraine. “Most of the population in Crimea is Russian,” an advisor told Major in a handwritten note.

They warned: “If Crimea becomes independent, Ukraine’s ability to control the Black Sea fleet — based at Sevastopol — goes with it.”

“The Ukrainians will try to prevent the referendum from being held…The issue will arouse passions among nationalists in Kiev and Moscow and could stir up inter-ethnic conflict within Crimea.”

Among those living in Crimea were the Tatars, an historic Muslim community that had been brutally oppressed under Soviet rule and wanted to remain part of Ukraine. 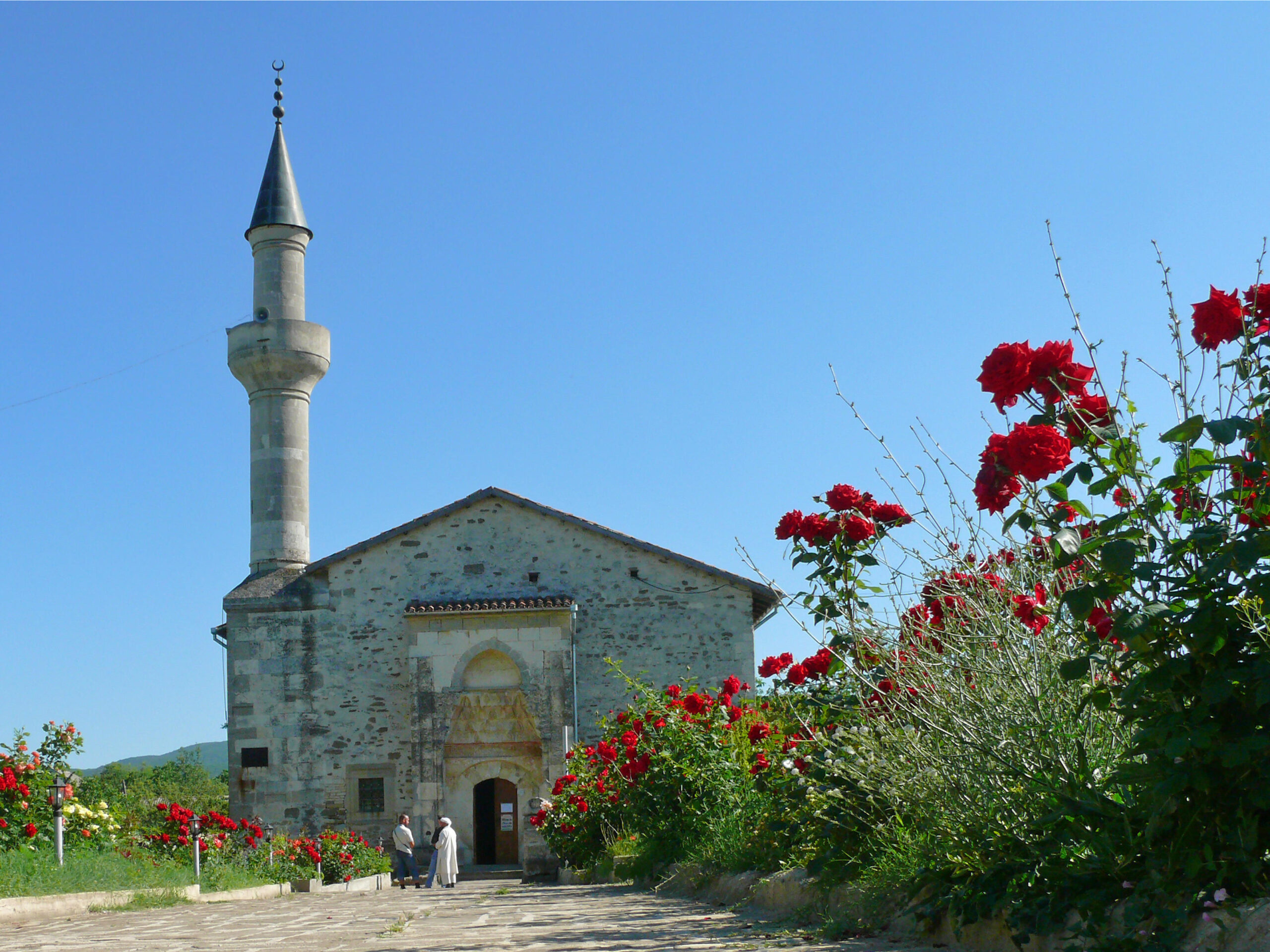 Ozbek Han Mosque — one of the oldest mosques of the Crimea, built in 1314 during the rule of the Golden Horde in the peninsula. (Piotr Matyga, CC BY-SA 4.0, Wikimedia Commons)

Percy Cradock, a veteran British diplomat and intelligence supremo, warned the situation “excites strong emotions in Crimea and amongst the powerful nationalist lobby in Kiev (as well as in Moscow).”

He believed: “There must be a real possibility that the situation will slip out of control. That could mean violence in Crimea, and serious confrontation between Russia and Ukraine.”

In the event, there was a messy compromise. Crimea’s parliament declared independence, while also acknowledging Ukraine’s authority. Yet the situation remained volatile.

“It is not entirely clear, even to the Ukrainians, still less to the Russians, that Ukraine is a real country,” Braithwaite noted. “Hence the tensions between the two.”

Braithwaite, who went on to chair the Joint Intelligence Committee later in 1992, gave the prime minister a potted history of the region, stretching back to the Middle Ages. He highlighted the “artificial famine which [Soviet leader Joseph] Stalin imposed on the Ukraine in 1930-31, when many millions of peasants were deported or starved to death.” 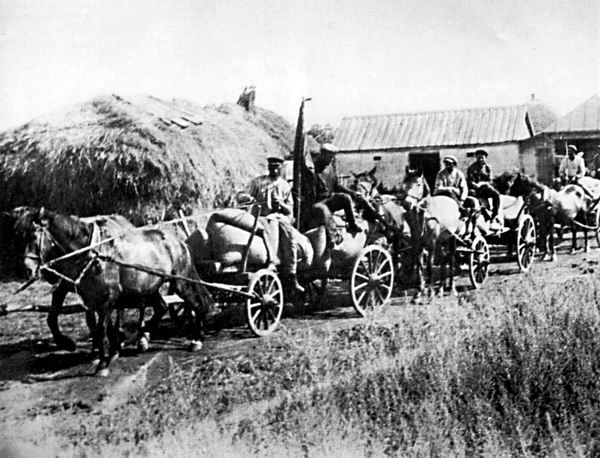 Soviet carts in the village of Oleksiyivka, Kharkiv oblast, in 1932 taking the harvest away from the peasants and creating the Holodomor, a manmade famine.  (Central State Audiovisual Archives of Ukraine, Public Domain)

“So it was not surprising then very many Ukrainians greeted the Germans as liberators in 1941, and that large numbers agreed to join the German army,” Braithwaite reasoned, referring to Nazi collaborators during World War II.

‘An Integral Part of Russia’

Although these resistance groups were ultimately defeated by Stalin, Ukrainian nationalism survived as a political movement. “Throughout 1990 the number and size of popular demonstrations for independence swelled,” Braithwaite noted, adding that Russia looked like an “empire” to Ukrainians.

On the other hand, he said: “Russians would simply not recognise the picture. For Russians, the Ukraine is an integral part of Russia, its history and its culture. The Ukrainian language is no more than a dialect.”

“I have not met a single Russian, even among the most sophisticated, who really believes that the Ukraine is now permanently severed from the motherland.”

In a candid remark, Braithwaite said:

“The Ukrainians know that. They also know that Ukraine itself is divided: between the ultra-nationalist … Western Ukraine … and the East which is predominantly inhabited by ethnic Russians.”

As tensions escalated, a confidential Whitehall planning paper warned: “We need to pay more attention to Ukraine.” It noted there were “fears over long term allegiance of ethnic Russian minority (22% of population)” and concerns that President Boris Yeltsin “will be replaced by nationalists/neo-imperialists” in the Kremlin. 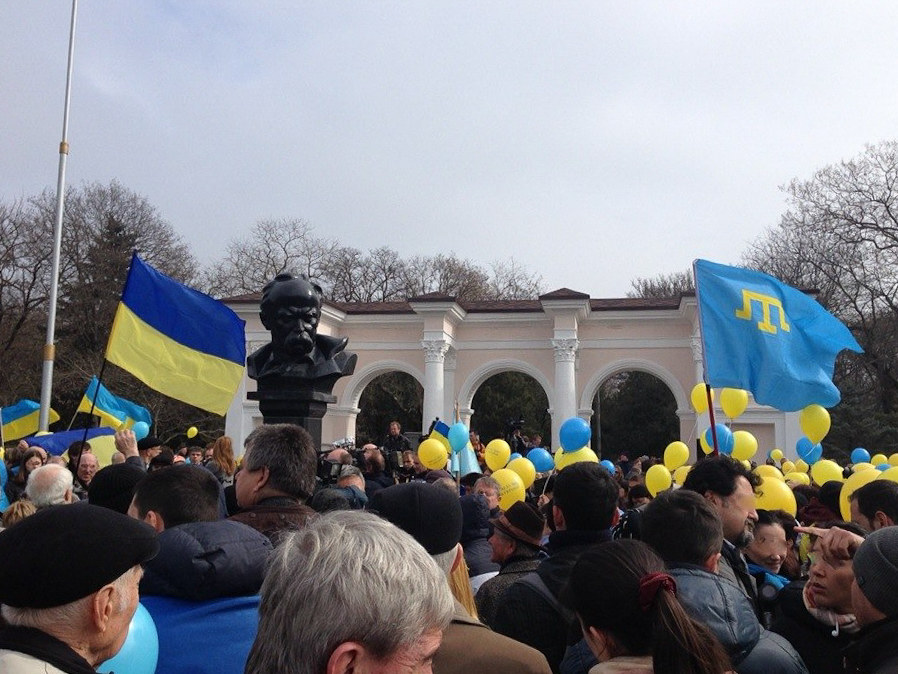 At the end of 1993, Foreign Office planners thought “Ukraine might be reabsorbed by Russia unless it faced up to the need for painful economic and political reforms” to make it less dependent on money from Moscow.

Ukraine’s deputy foreign minister, Borys Tarasyuk, did not dispute the analysis when British diplomats came to Kiev to meet him in early 1994 for “some six hours of confidential exchanges.”

Tarasyuk believed Moscow “was determined to try to assert as much control as possible over all the republics of the former Soviet Union” and would “use the well tried strategy of destabilising their neighbours in order to justify intervention”.

The Ukrainian politician was apparently “particularly exercised about the Crimea where recent elections have demonstrated the strength of pro-Russian separatist feeling.”

Roger Bone, a senior British diplomat who would later run arms giant Boeing, “reassured Tarasyuk that the West was very much alive to the risk of a shift in Russian foreign policy” and “would not acquiesce in the re-establishment of a Russian sphere of influence.” 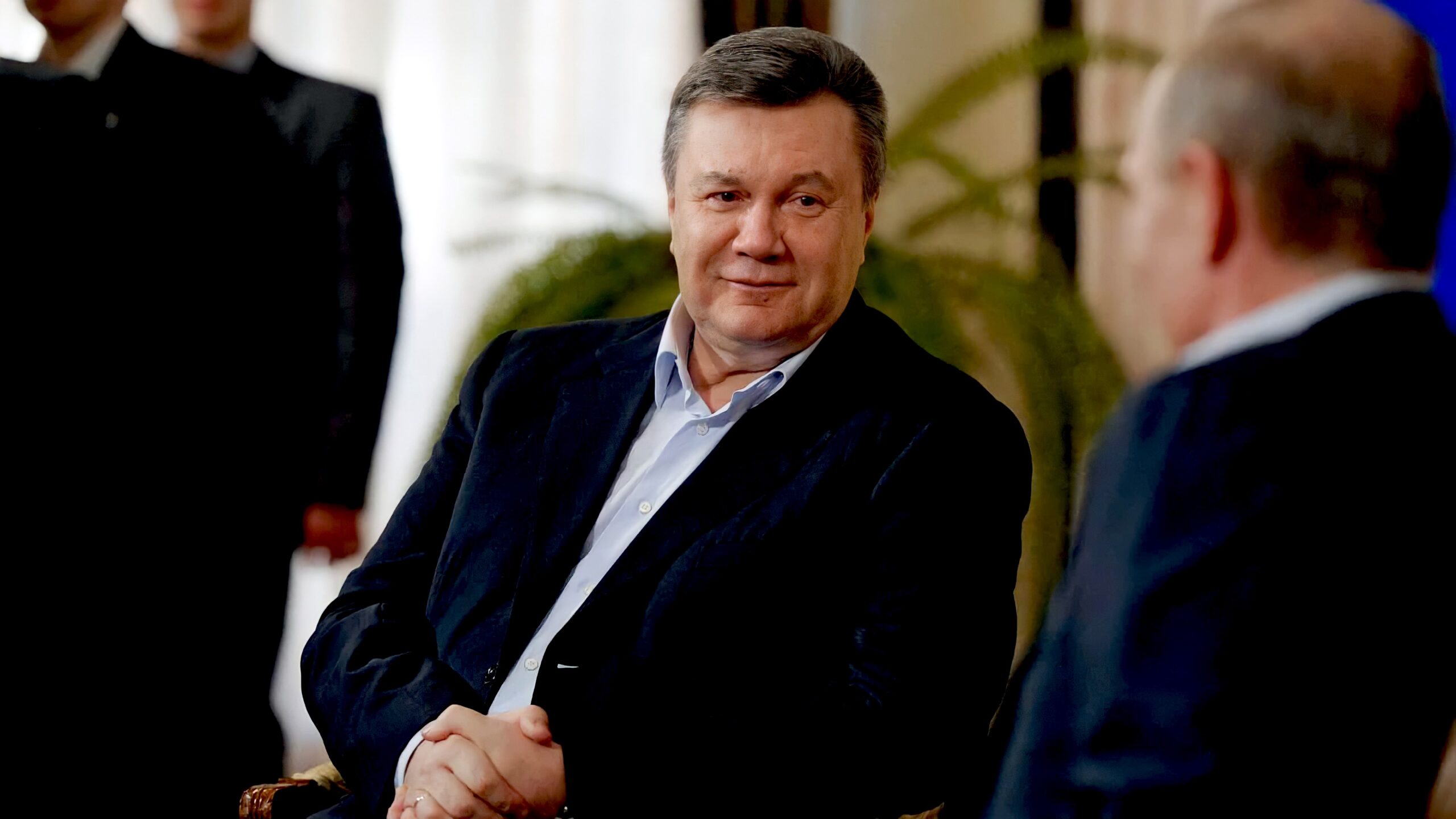 Plans were made to bring Ukraine’s economy into the Western orbit, through promoting privatisation and engagement with the International Monetary Fund. Financial aid was to be conditional on Ukraine restructuring its economy towards a free-market model.

It would take another 20 or 30 years for the significance of these discussions to become fully apparent. In 2014, Ukraine’s democratically elected president was toppled in a popular “coup” after he opted for an economic deal with Russia instead of the European Union.

Russia, now led by the nationalist Vladimir Putin, reacted to the loss of his ally by annexing Crimea. Residents supposedly voted by 97 percent to join Russia in a referendum, which was boycotted by Tatars and not recognised by Britain.

Putin is now repeating his referendum tactic by holding disputed polls in the Donbass, despite the ongoing war. While British intelligence has recently won credit for predicting the conflict, the declassified files make clear this was a risk Whitehall had long known about.