It is criminal that the IMF would impose strict austerity when the agricultural infrastructure is utterly destroyed, writes Vijay Prashad. Pakistan is suffering from “climate apartheid.” 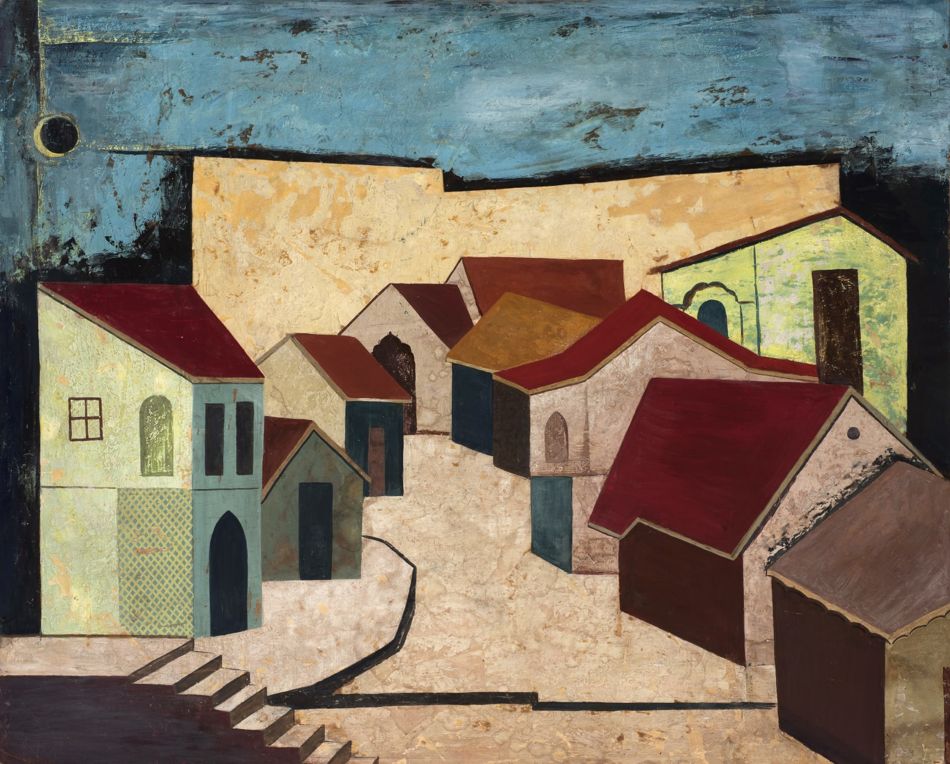 Calamities are familiar to the people of Pakistan who have struggled through several catastrophic earthquakes, including those in 2005, 2013 and 2015 (to name the most damaging), as well as the horrendous floods of 2010. However, nothing could prepare the fifth most populated country in the world for this summer’s devastating events, which began with high temperatures and political chaos followed by unimaginable flooding.

Cascading frustration with the Pakistani state defines the public mood. Taimur Rahman, the general secretary of the Mazdoor Kisan Party (Workers and Peasants Party), told Peoples Dispatch that after the 2010 floods, there was “enormous outrage about the fact that the government had not done anything to ensure that … when there is an overflow of water, it can be controlled.”

Evidence of relief funds being siphoned off by corrupt politicians and the wealthy elite began to define the post-2010 period; those memories remain intact. People understand that when the disaster industrial complex is in motion, cycles of corruption accelerate.

[Tricontinental: Institute for Social Research has worked with the International People’s Assembly to produce Red Alert No. 15 on the floods in Pakistan and the political implications of this disaster.] 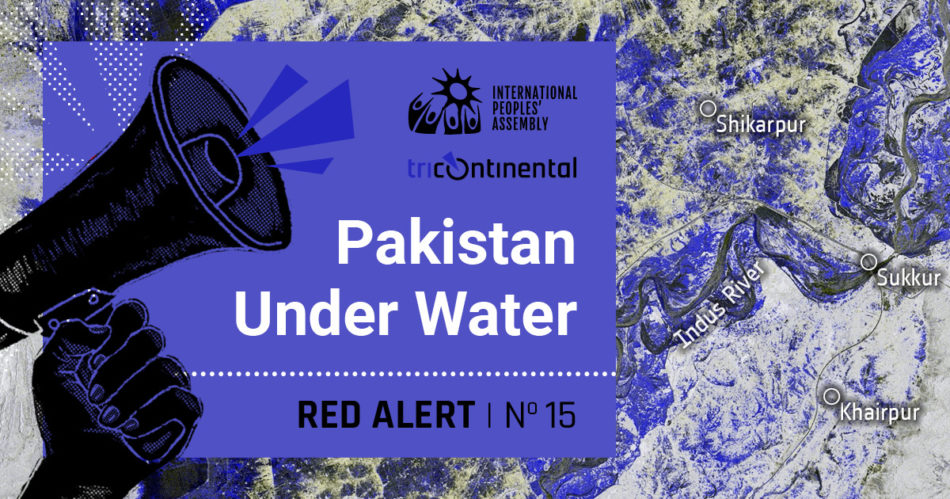 A third of Pakistan’s vast landmass was inundated by floods in the last week of August. Satellite imagery showed the rapid spread of the waters which broke the banks of the Indus River, covering large sections of two major provinces, Balochistan and Sindh.

On Aug. 30, United Nations Secretary-General António Guterres called it a “monsoon on steroids,” as the rainwaters swept away more than 1,000 people to their deaths and displaced about 33 million more.

The situation is dire, with those who fled their homes in immediate and long-term danger. The people camped out on higher land, such as major roadways, are currently at risk of starvation and in danger of contracting water-borne diseases such as diarrhoea, dysentery and hepatitis.

In the long-term, people who have lost their standing crops (cotton and sugarcane) and livestock face guaranteed impoverishment. Pakistan’s Planning Minister Ahsan Iqbal estimates that the damages will total more than $10 billion.

At first glance, the primary reason for the floods appears to be additional heavy rain at the tail end of an already record-breaking monsoon or rainy season. A very hot summer with temperatures of over 40°C for long periods in April and May made Pakistan “the hottest place on earth,” according to Malik Amin Aslam, a former minister for climate change.

These scorching months resulted in abnormal melting of the country’s northern glaciers, whose waters met the torrential rain spurred by a “triple dip” – three consecutive years of La Niña cooling in the equatorial Pacific Ocean. In addition, catastrophic climate change – driven by global carbon-fueled capitalism – has also caused the glacial melt and downpour.

But the nature of the floods themselves are not wholly due to turbulent weather patterns. Significantly, the impact of the rising waters on Pakistan’s population is due to unchecked deforestation and deteriorated infrastructure such as dams, canals and other channels to contain water.

In 2019, the World Bank said that Pakistan faces a “green emergency” because each year about 27,000 hectares of natural forest is cut down, making rainwater absorption in the soil much more difficult.

Furthermore, lack of state investment in dams and canals (now heavily silted) has made it much harder to control large quantities of water. The most important of these dams, canals and reservoirs are the Sukkur Barrage, the world’s largest irrigation system of its kind, which draws the Indus into the southern Sindh River, and the Mangla and Tarbela reservoirs, which divert the waters from Pakistan’s capital, Islamabad. Illegal real estate construction on floodplains further exacerbates the potential for human tragedy.

God has little to do with these floods. Nature has only compounded the underlying crises of capitalist-driven climate catastrophe and neglect of water, land, and forest management in Pakistan. 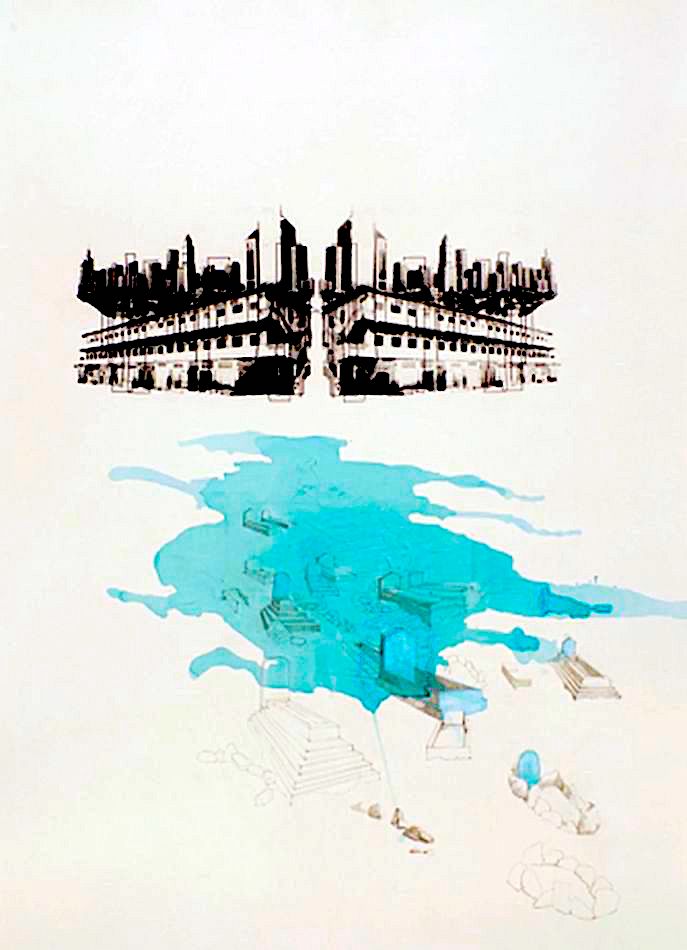 The floodwaters have revealed a set of enduring problems that paralyse Pakistan. Surveys in May, before the floods, showed that 54 percent of the population considered inflation to be their main problem.

By August, the Pakistan Bureau of Statistics reported that the wholesale price index, which measures fluctuation in the average prices of goods, increased by 41.2 percent while the annual inflation rate was 27 percent.

Despite inflation rising globally and the acknowledgment that the cost of the floods would be over $10 billion, the International Monetary Fund (IMF) has promised a mere $1.1 billion with austerity-like conditions attached to it such as “prudent monetary policy.”

It is criminal that the IMF would impose strict austerity when the country’s agricultural infrastructure is utterly destroyed (this inadequate action is reminiscent of the British colonial policy to continue the export of wheat from India during the 1943 Bengal famine).

The 2021 Global Hunger Index already placed Pakistan at 92 out of 116 countries with its hunger crisis — prior to the floods — at a serious level. Yet, as none of the country’s bourgeois political parties have taken these findings to heart, undoubtedly, its economic crisis will intensify with little recovery.

This brings us to the acute political crisis. Since its independence from the British in 1947, 75 years ago, Pakistan has had 31 prime ministers. In April, the 30th, Imran Khan, was removed to install the current Prime Minister Shehbaz Sharif.

Khan, who faces charges of terrorism and contempt of court, alleged that his government was removed at the behest of Washington owing to his close ties to Russia. Khan’s Pakistan Tehreek-e-Insaf (PTI or Justice Party) did not win a majority in the 2018 elections, which left his coalition vulnerable to the departures of a handful of legislators. That is precisely what was done by the opposition, which stormed into power through legislative manoeuvres, without a new mandate from the public.

Since his removal, the standing of Imran Khan and the PTI has risen in Pakistan, having won 15 out of 20 of July’s by-elections in Karachi and Punjab, before the floods. Now, as anger rises against Sharif’s government due to the slow pace of relief for flood victims, the political crisis will only deepen. 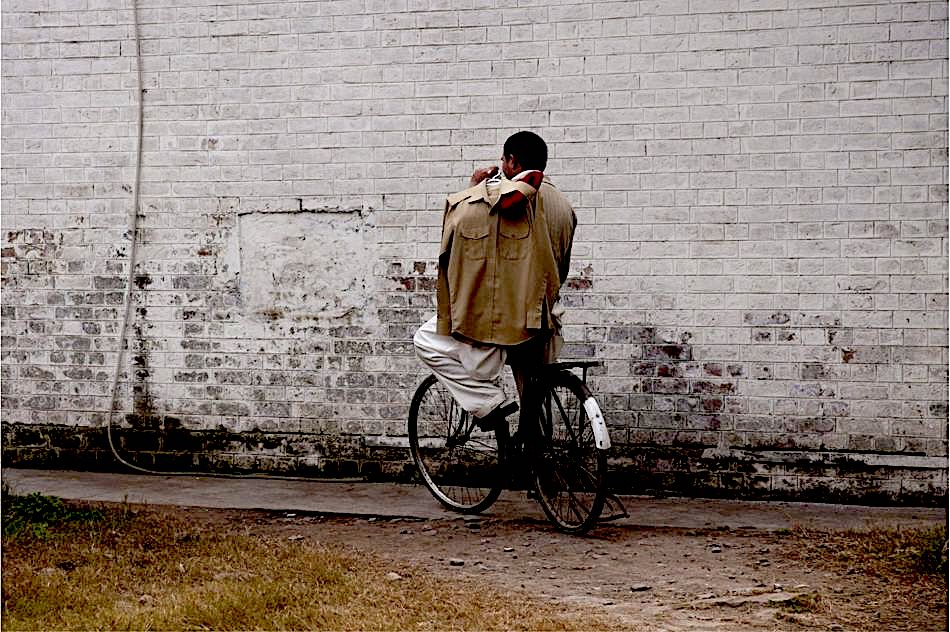 Pakistan is suffering from “climate apartheid.” This country of over 230 million people contributes only one percent of global greenhouse gas emissions, yet it is threatened by the eighth highest climate risk in the world.

Left and progressive forces — such as the Mazdoor Kisan Party — and other civilian groups have organised a flood relief campaign in Pakistan’s four provinces. They are reaching out mainly with food relief to tackle starvation in hard-to-reach, largely rural areas.

The Pakistani left is demanding that the government stem the tide of austerity and inflation that is sure to exacerbate the humanitarian crisis. 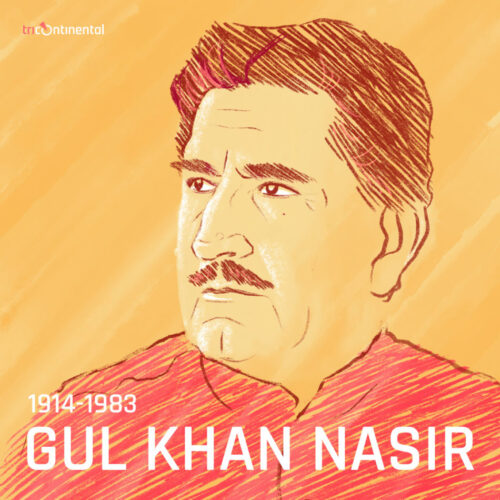 In the summer of 1970, flash floods in the mountainous region of Baluchistan caused great damage. A few months later in the general elections, the poet Gul Khan Nasir of the National Awami Party won a seat in the Baluchistan provincial assembly and became the minister of education, health, information, social welfare and tourism.

Gul Khan Nasir put his Marxist convictions to work building the social capacity of the Baluch people (including setting up the province’s only medical school in Quetta, the provincial capital). Thrown out of office by undemocratic means, Nasir was sent back to prison, a place he had become all too familiar with in previous years. There, he wrote his anthem, Demaa Qadam (“Forward March”). One of its stanzas, 50 years later, seems to describe the zeitgeist in his native land:

If the sky above your heads
becomes full of anger, full of wrath,
thunder and rain and lightning and wind.
The night becomes dark as pitch.
The ground becomes like fire.
The times become savage.
But your goal remains the same:
March, March, Forward March.

← Chris Hedges: Monarchs Belong in the Dustbin of History
SCOTT RITTER: Why Russia Will Still Win, Despite Ukraine’s Gains →