They are all based on real-life events that Peter Dreier thinks deserve more attention. 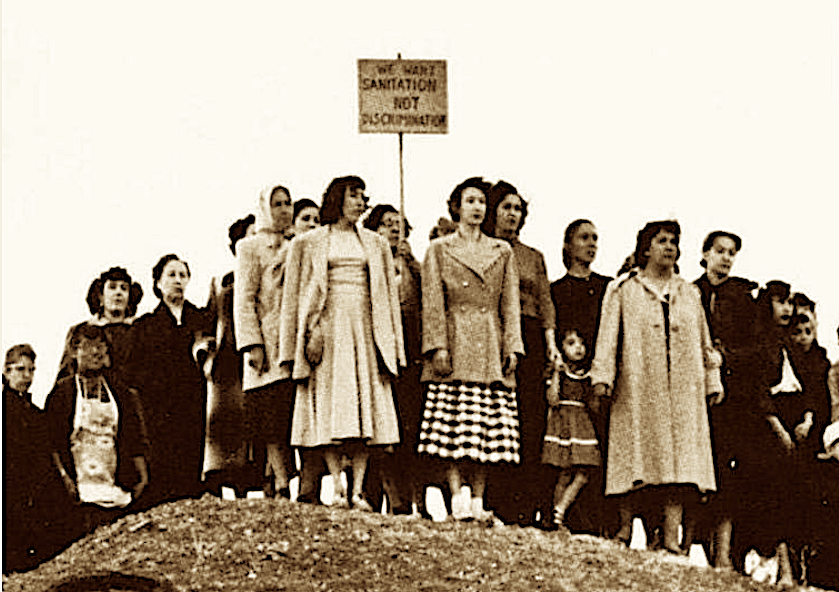 The Salt of the Earth, made during the height of the post-World War II Red Scare, was blacklisted. (IMDB)

Unions are more popular now than at any time since 1965, and the U.S. is in the midst of a new upsurge of union organizing. Is a Hollywood drama about angry Starbucks baristas or frustrated Amazon warehouse workers far behind?

Hollywood studios and independent producers have long depicted the collective efforts of working people to improve their lives and gain a voice in their workplaces and the larger society.

Some of the most well-known labor movies champion the struggle of the everyday worker are:

“Modern Times,” released in 1936, stars Charlie Chaplin going crazy due to his job on an assembly line. It features the famous image of Chaplin caught in the gears of factory machinery.

“The Grapes of Wrath,” a 1940 adaptation of John Steinbeck’s novel, tells the story of sharecropper Tom Joad’s radicalization after his family and other migrant workers experience destitute conditions in California’s growing fields and overcrowded migrant camps.

1979’s Norma Rae, is based on the life of Crystal Lee Sutton, who worked in a J.P. Stevens mill in North Carolina. The textile worker and single mom inspires her fellow workers to overcome their racial animus and work together to vote in a union.

Bread and Roses, a 2000 film about low-wage janitors in Los Angeles, is based on the Service Employees International Union’s “Justice for Janitors movement.

Red Scare-era releases, such as 1952’s Big Jim McLain and the 1954 film On the Waterfront, often depicted unions as corrupt or infiltrated by communist subversives.

When I teach labor history, I’ve used films to supplement books and articles. I’ve found that students more easily grasp the human dimensions of workers’ lives and struggles when they are depicted on the screen.

Here are five unsung labor movies, all based on real-life events, that, in my view, deserve more attention:

This is a fictionalized account of a fascinating but little-known political movement: the Non-Partisan League, which organized farmers in the upper Midwest in the early 1900s.

During this period, Midwestern farmers worked long hours to harvest grain that they were then forced to sell for low prices to elevators, while paying high prices to the big railroad companies and banks. Economic insecurity was a part of life, and foreclosures were routine.

The film follows Ray Sorenson, a young farmer influenced by socialist ideas who leaves his North Dakota farm to become a Non-Partisan League organizer. In his beat-up Model T, he travels the back roads, talking to farmers in their fields or around the potbellied stoves of country stores. He eventually persuades skeptical farmers that electing NPL candidates could get the government to create cooperative grain elevators, state-chartered banks with farmers as stockholders, and limits on the prices that railroads can charge farmers to haul their wheat.

In 1916, the Non-Partisan League did, in fact, elect farmer Lynn Frazier as governor of North Dakota with 79 percent of the vote. Two years later, the NPL won control of both houses of the state legislature and created the North Dakota Mill, still the only state-owned flour mill, and the The Bank of North Dakota, which remains the nation’s only government-owned general-service bank.

After his employees hang him in effigy, the tycoon goes undercover to ferret out the agitators of a union drive led by a store clerk in the shoe department and a union organizer.

As he learns more about their lives, Merrick grows sympathetic to his workers – and even falls in love with one of his employees – none of whom know his true identity. As the workers prepare to go on strike, and even picket his house, Merrick reveals that he owns the store and agrees to their demands over pay and hours – and even marries the employee he’s fallen for.

The film was likely inspired by the 1937 sit-down strikes by employees of New York City’s department stores.

Decades ahead of its time, this story of New Mexico mine workers deals with issues of racism, sexism and class.

After a mine accident, the Mexican-American workers decide to strike. They demand better safety standards and equal treatment, since white miners are allowed to work in pairs, while Mexican ones are forced to work alone. The strikers expect the women to stay at home, cook and take care of the children. But when the company gets an injunction to end the men’s protest, the women step up and maintain the picket lines, earning greater respect from the men.

Made at the height of the Red Scare, the film’s writer, producer and director had been blacklisted for their leftist sympathies, so the film was sponsored by the International Union of Mine, Mill and Smelter Workers, not a Hollywood studio.

Will Geer, a blacklisted actor who later portrayed Grandpa Walton on the TV drama “The Waltons,” played the repressive sheriff. Mexican actress Rosaura Revueltas played the leader of the wives. The other characters were portrayed by real miners and their wives who participated in the strike against the Empire Zinc Company, which served as the inspiration for the film.

The film itself was blacklisted, and no major theater chain would show it.

Andre Braugher stars as A. Philip Randolph, who organized the Brotherhood of Sleeping Car Porters, the first Black-run union.

Being a porter on a Pullman railroad car was one of the few jobs open to Black men. But wages were low, travel was constant and trains’ white passengers patronized the porters by calling all of them “George,” after George Pullman, the mogul who owned the company.

The company hired thugs to intimidate the porters, but Randolph and his top lieutenants persisted. They began their crusade in 1925 but didn’t get the company to sign a contract with the union until 1937, thanks to a New Deal law that gave railroad workers the right to unionize. Randolph became American’s leading civil rights organizer during the 1940s and 1950s and orchestrated the 1963 March on Washington. 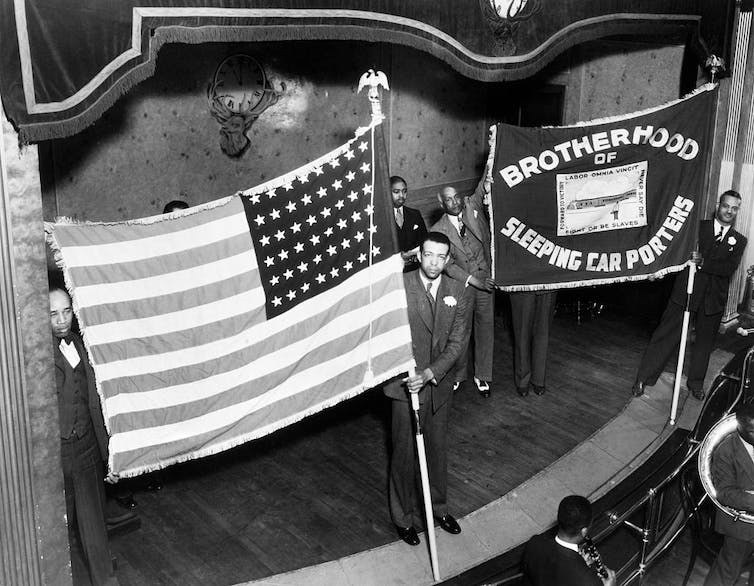 Members of the Brotherhood of Sleeping Car Porters display their banner at a 1955 ceremony celebrating the organization’s 30th anniversary. (Bettmann/Getty Images)

Charlize Theron portrays Josey Aimes, a desperate single mom who flees her abusive husband, returns to her hometown in northern Minnesota, moves in with her parents and takes a job at an iron mine.

There, she is constantly groped, insulted and bullied by the male workers. She complains to the company managers, who don’t take her seriously. The male-dominated union claims there’s nothing they can do. Aimes sues the company, which, after a dramatic courtroom scene, is forced to settle with her and other women.

With stellar performances by Theron, Sissy Spacek, Frances McDormand and Woody Harrelson, “North Country” is based on a groundbreaking lawsuit brought by women miners at Minnesota’s Eveleth Mines in 1975 that helped make sexual harassment a violation of workers’ rights.

← US LABOR DAY: Central American Migrants & US Labor History
US LABOR DAY: Union Support in US at Five-Decade High →

12 comments for “US LABOR DAY: 5 Unsung Films About Workers”