Ann Wright reports on anti-NATO protests and declarations on the sidelines of the military alliance’s recent summit in Madrid. 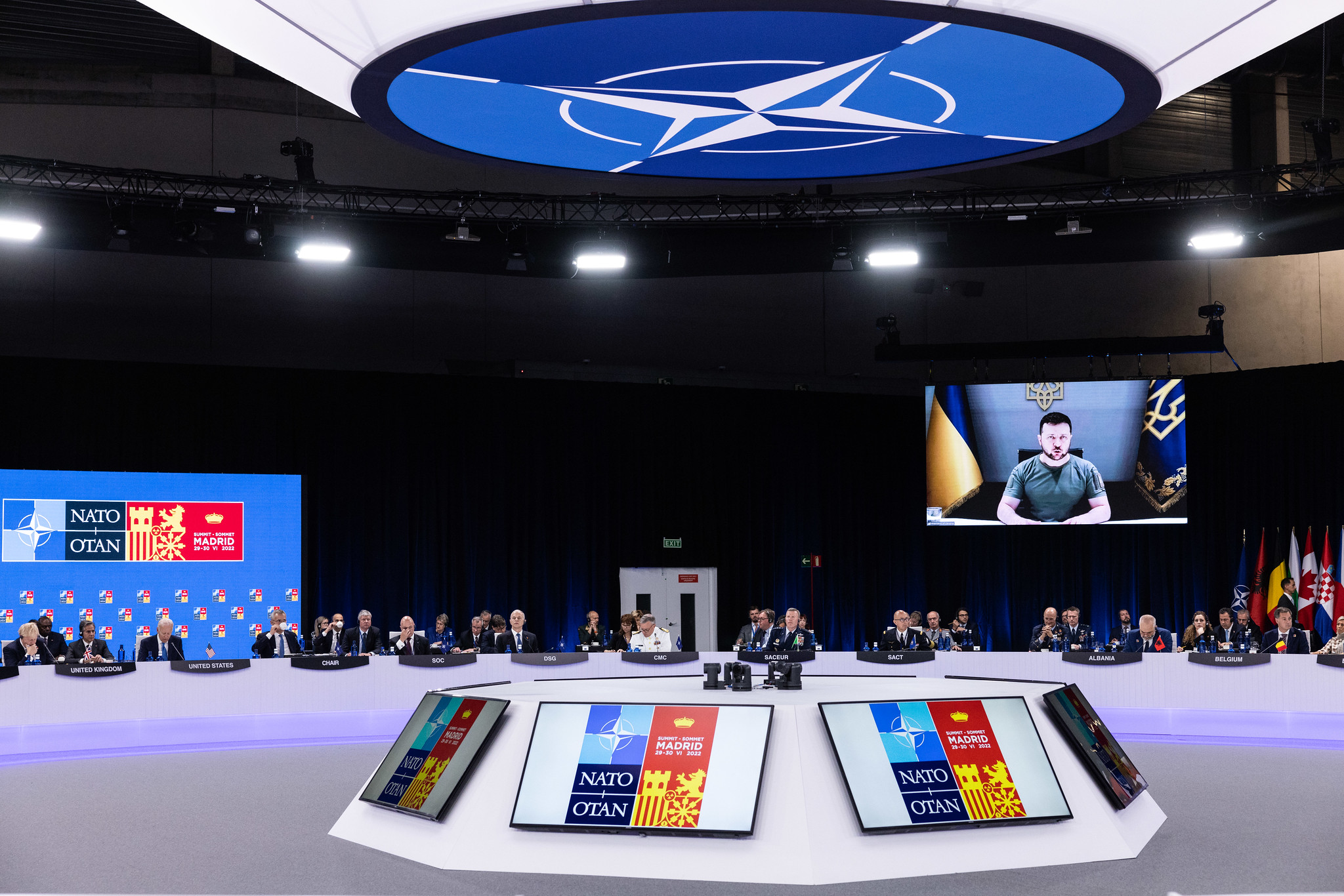 NATO summit in Madrid on June 29, with Ukraine’s President Volodomyr Zelensky on the screen at upper right. (NATO)

I was one of hundreds who attended the “NO to NATO” peace summit June 26-27 and one of tens of thousands who marched for “NO to NATO” in Madrid a few days before the leaders of the 30 NATO countries arrived in the city to map out NATO’s future military actions.

Two conferences, the Peace Summit and the Counter-Summit, provided opportunities for Spaniards and international delegations to hear the impact of ever-increasing military budgets on NATO countries that give weaponry and personnel to the war mongering capabilities of NATO at the expense of health, education, housing and other true human security needs.

In Europe, the disastrous decision by the Russian Federation to invade Ukraine and the tragic loss of life and destruction of large parts of the industrial base of the country and in the Dombass region is seen as a situation precipitated by a U.S.- sponsored coup in Ukraine in 2014.

Without defending or justifying the Russian attack on Ukraine, the rhetoric by NATO, the U.S. and the European Union about Ukraine joining their organizations is recognized as crossing one of the often-cited “red lines” for the Russian Federation’s national security.

The continuing large-scale U.S. and NATO military war maneuvers, the creation of U.S.-NATO bases and deployment of missiles on the border with Russia are identified as provocative, aggressive actions.

Ever more powerful weapons are being injected into the Ukrainian battlefields by NATO countries which could inadvertently, or purposefully, quickly escalate to the disastrous use of nuclear weapons.

In the peace summits, we heard from people directly affected by NATO’s military action.  The Finnish delegation is strongly opposed to its country joining NATO and spoke of the relentless media campaign by the government of Finland that has influenced traditional “No to NATO” Finns to acquiesce to the government’s decision to join the military alliance. We also heard by Zoom from speakers from Ukraine and Russia who both want peace for their countries — not wars — and who urged their governments to begin negotiations to end the horrific war.

The Madrid Peace Summit ended with this  final declaration :

“It is our obligation as members of the human species in order to build and defend peace 360º, from north to south, from east to west to demand our governments give up militarism as a way of dealing with conflicts.

It is easy to establish the connection between more weapons in the world and more wars. History teaches us that those who can impose their ideas by force will not try to do so by other means. This new expansion is a new expression of the authoritarian and colonial response to the current eco-social crisis, because wars have also led to violent expropriation of resources.

NATO’s new security concept called NATO 360º radius, calls for military intervention by NATO anywhere, anytime, all around the planet. The Russian Federation and the People’s Republic of China are singled out as military adversaries and, for the first time, the Global South appears within the scope of the Alliance’s intervention capabilities,

NATO 360 is prepared to intervene outside the imperative mandates of the UN Charter, as it did in Yugoslavia, Afghanistan, Iraq and Libya. This violation of international law, as we have also seen in Russia’s invasion of Ukraine, has sped up the pace at which the world becomes insecure and militarized.

This southward focus shift will bring about an extension in the capabilities of US military bases deployed in the Mediterranean; in the case of Spain, the bases in Rota and Morón.

NATO 360º strategy is a threat to peace, an obstacle to progress towards shared demilitarized security.

It is antagonistic to real human security that responds to the threats faced by the majority of the planet’s population: hunger, disease, inequality, unemployment, lack of public services, land grabbing and wealth and climate crises.

NATO 360º advocates increasing military spending to 2% of GDP, does not renounce the use of nuclear weapons and thus encourages the proliferation of the ultimate weapon of mass destruction.”

NO TO NATO’s International Coalition Statement

The NO to NATO international coalition issued a strong and extensive statement on July 4, contesting NATO’s Madrid summit strategy and its continuing aggressive actions.  The coalition expressed “outrage” at the decision of NATO’s heads of government to further increase confrontation, militarization and globalization instead of opting for dialog, disarmament and peaceful co-existence.

“NATO propaganda paints a false picture of NATO representing the so-called democratic countries versus an authoritarian world to legitimize its militaristic course. In reality, NATO is stepping up its confrontation with rival and emerging superpowers in pursuit of geopolitical hegemony, control over transport routes, markets and natural resources.  Although NATO’s strategic concept claims to be working toward disarmament and arms control, it is doing just the opposite.”

“account for two-thirds of the global arms trade that destabilizes entire regions and that warring countries like Saudi Arabia are among NATO’s best customers. NATO maintains privileged relationships with gross human rights violators like Colombia and apartheid state Israel… The military alliance is abusing the Russia-Ukraine war to dramatically increase the armament of its member states by many tens of billions and by expanding its Rapid Reaction Force on a massive scale … Under the leadership of the U.S., NATO applies a military strategy aimed at weakening Russia rather than bringing a swift end to the war. This is a dangerous policy that can only contribute to increase the suffering in Ukraine and can bring the war into dangerous levels of (nuclear) escalation.”

“NATO and the nuclear member states continue to see nuclear weapons as an essential part of their military strategy and refuse to comply with the obligations of the Non-Proliferation Treaty. They reject the new nuclear ban treaty (TPNW) which is a necessary complementary instrument to free the world of genocidal weapons.”

The international NO to NATO coalition

“rejects NATO’s further expansion plans which are provocative. Any country in the world would see it as a violation of its security interests if a hostile military alliance would advance towards its borders. We also condemn the fact that the inclusion of Finland and Sweden into NATO is accompanied by the acceptance and even support of Turkey’s war policy and human rights infringements against the Kurds. The silence on Turkey’s violations of international law, invasions, occupations, looting and ethnical cleansings in northern Syria and northern Iraq bears witness to NATO’s complicity.”

“NATO invited several countries from the ‘Indo-Pacific’ to its summit with the purpose to strengthen mutual military ties in what is framed as meeting ‘systemic challenges’ that would emanate from China. This regional military build-up is part of NATO’s further transformation into a global military alliance that will increase tensions, risk dangerous confrontations and can lead into an unprecedented arms race in the region.”

"It's so important to tell our governments that we don't want enemies, we want friends. Let's have programs for friendship, not killing each other" pic.twitter.com/VOuACPLrnQ

NO to NATO and the international peace movement

“calls on social movements such as trade unions, environmental movement, women’s, youth, anti-racism organizations to resist the militarization of our societies that can only come at the expense of social welfare, public services, the environment, and human rights.

“Together we can work for a different security order based on dialogue, cooperation, disarmament, common and human security. This is not only desirable, but necessary if we want to preserve the planet from threats and challenges posed by nuclear weapons, climate change and poverty.”

On June 29, wives of NATO leaders had their photo taken in front of one of the most famous 20th century paintings, “Guernica,” painted by Pablo Picasso to express his outrage over the Nazi bombing of a Basque city in northern Spain ordered by General Francisco Franco.

Two days earlier, to protest the deadly actions of NATO, Extinction Rebellion activists from Madrid staged a die-in in front of the monumental black-and-white canvas that has become an international symbol of genocide committed during wartime.

The week in Madrid at the “NO to NATO” events underscored the current threats of war to the survival of humanity.

NO to NATO’s final statement:

“Together we MUST work for a different security order based on dialogue, cooperation, disarmament, common and human security. This is not only desirable, but necessary if we want to preserve the planet from threats and challenges posed by nuclear weapons, climate change and poverty.”

Ann Wright is a 29-year US Army/Army Reserves veteran who retired as a colonel. She is also a former U.S. diplomat who resigned in March 2003 in opposition to the war on Iraq.  She served in Nicaragua, Grenada, Somalia, Uzbekistan, Kyrgyzstan, Sierra Leone, Micronesia and Mongolia.  In December 2001 she was on the small team that reopened the U.S. embassy in Kabul. She is co-author of Dissent: Voices of Conscience.

This article is from Popular Resistance.

6 comments for “Amid War in Ukraine: Intl Peace Coalition’s ‘NO to NATO’”