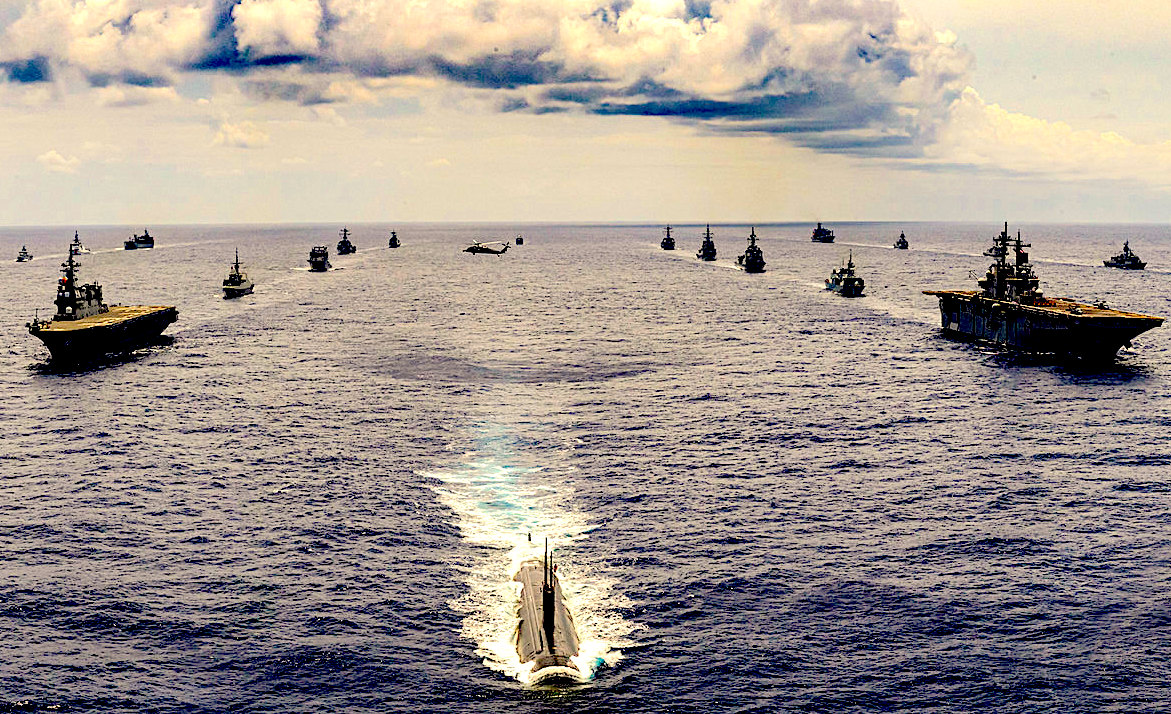 Multinational navy ships and a submarine in formation off the coast of Hawaii during RIMPAC 2020, Aug, 21. (U.S. Navy)

While the world’s attention is focused on the brutal Russia-Ukraine conflict, half-way around the world, in the Pacific Ocean, competition/confrontation of the U.S. and NATO toward China and North Korea is taking an increasingly military turn.

The U.S. military’s Indo-Pacific command headquartered in Honolulu, Rim of the Pacific or RIMPAC 2022, military war games, will have 38 ships from 26 countries, four submarines, 170 aircraft and 25,000 military personnel practicing naval war maneuvers in the Hawaiian waters from June 29-Aug. 4.  Additionally, ground units from nine countries will come ashore on the islands of Hawai’i in amphibious landings.

Many citizens of the 26 RIMPAC countries do not agree with their country’s participation in the RIMPAC war games, calling them provocative and dangerous for the region.

The network’s petition for cancellation of RIMPAC states that:

“RIMPAC dramatically contributes to the destruction of the ecology system and aggravation of the climate crisis in the Pacific region. RIMPAC war forces will blow up decommissioned ships with missiles endangering marine mammals such as humpback whales, dolphins and Hawaiian monk seals and polluting the ocean with contaminates from the vessels. Land forces will conduct ground assaults that will tear up beaches where green sea turtles come to breed.” 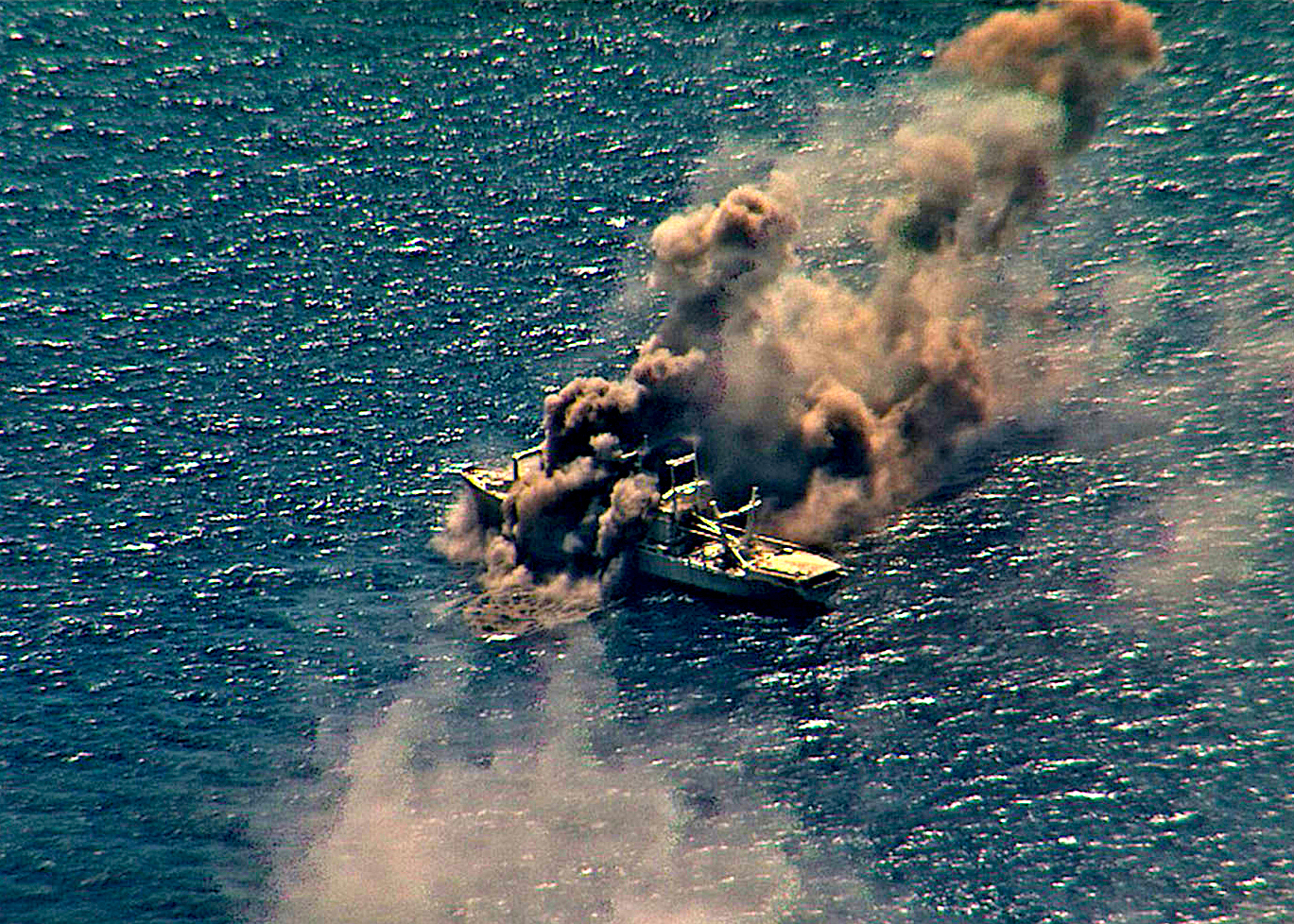 The petition rejects “the massive expenditure of funds on war-making when humanity is suffering from lack of food, water and other life-sustaining elements. Human security is not based on military war drills, but on care for the planet and its inhabitants.”

Other citizen groups in the Pacific region are adding their voices to the call to cancel RIMPAC.

In its statement about RIMPAC, the Hawaii-based Women’s Voices, Women Speak declared that:

In a June 14 opinion piece in The Honolulu Star Advertiser, the only state-wide newspaper in Hawai’i, three local activists with the Hawai’i Committee for Human Rights in the Philippines wrote:

Military posturing in the Asia-Pacific also risks nuclear war and the potential extinction of the human species. We must instead work toward global cooperation to address the threats of climate change and biodiversity loss; to build toward peace, life and coexistence.”

The citizen’s petition to Cancel RIMPAC has individual signatures and organizational endorsers from around the world.

Forty percent of RIMPAC participants are either in NATO or have NATO ties. Six of the 26 RIMPAC countries are members of the NATO — Canada, Denmark, France, Germany, the United Kingdom and the United States, while four other participating countries are Asia-Pacific “partners” of NATO —Australia, Japan, South Korea and New Zealand.

NATO military exercises throughout Europe, particularly on the border with Russia and the U.S. never-ending discussion about Ukraine’s possible membership in NATO (the door is never closed) were two major red lines the Russian government used to justify its war on Ukraine.

In the Pacific, NATO forces coming into the region greatly increase the tension with China and North Korea.

Military naval events both in practice and in war are dangerous for humans … and for marine mammals. The Russian-Ukrainian war is the most recent example. Scores of dolphins have turned up dead on the coasts of the Black Sea from that war.

Research scientists suggest that dolphins may be dying in the Black Sea due to a large presence of Russian warships and Ukrainian responses to those ships disrupting the dolphins’ communication pattern.

The “intense ship noise and low-frequency sonars” interfere with the dolphins’ main means of communication. Disruptive underwater noises may either have them end up losing their way in large fishing nets or around the Black Sea shores.”

According to a report by The Guardian, researchers believe that heightened noise pollution in the northern Black Sea caused by around 20 Russian navy vessels and ongoing military activities might have driven the dolphins south to the Turkish and Bulgarian coasts.

The Turkish Marine Research Foundation (TÜDAV) announced recently that more than 80 dolphins were found dead across the country’s western Black Sea coast, “an extraordinary increase” in the number of marine mammals found dead in a typical year.  A recent video from the Black Sea documents some of the 80 dead dolphins.

Several studies in the past have confirmed that military sonars are harmful to marine life and many militaries have adopted mitigating measures to protect wildlife.  Whales and dolphins have been killed in U.S. military war exercises by sonar and bombs.

In March 2000, the U.S. Navy admitted that its use of a high-intensity sonar system caused 16 beaked and minke whales to be stranded on beaches in the Bahamas shortly after U.S. Navy ships using high-intensity sonar had passed by. Six of the whales died and autopsies on the mammals revealed bleeding around the whales’ inner ears and in one instance in the brain.

Ten whales were pushed back into the sea but a decline in sightings of beaked whales led researchers working in the area to believe that many more may have died.

The Navy and the National Marine Fisheries Service (NMFS) launched a series of investigations with the interim synopsis of the reports concluding that the bleeding was caused by sound waves produced by the high-intensity sonar.

With almost twice as many military ships (38) arriving in the Hawaiian waters than the Russian navy has in the Black Sea (20), the dangerous effects of the RIMPAC war maneuvers on dolphins, whales and fishes will be substantial. 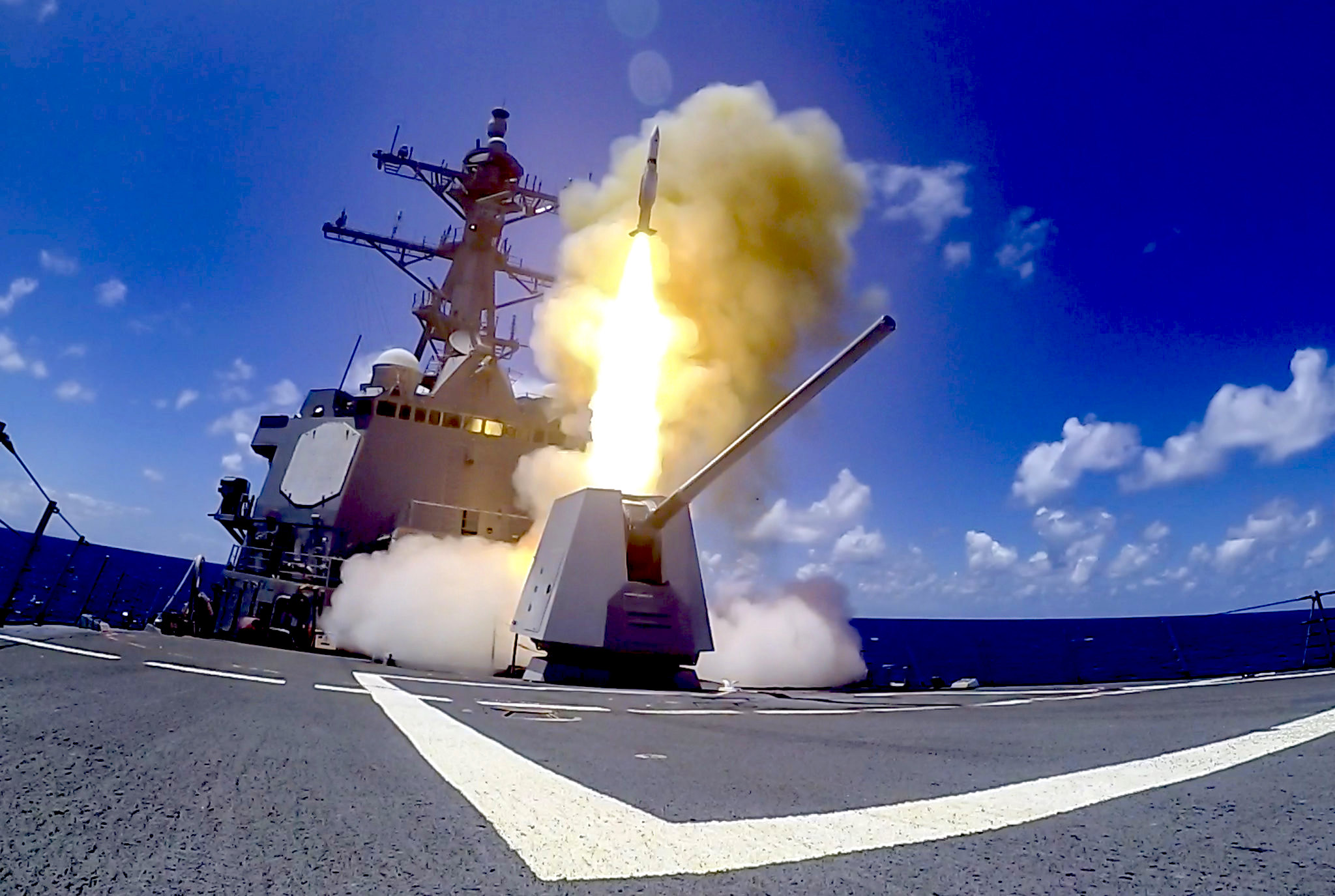 The effect of the RIMPAC military war exercises on international relations in the Pacific region may also have dangerous, intended or unintended, consequences that could put the region into ever increasing military confrontation instead of dialogue.

We need only look to the horrific loss of life and destruction of cities, farms and infrastructure in Ukraine to imagine what would happen should an incident, accident or purposeful, trigger military responses in Asia.

Major cities in Asia — Beijing, Shanghai, Hong Kong, Seoul, Tokyo, Pyongyang and Moscow — could be targeted and destroyed by ballistic missiles from the U.S. and NATO.

Cities in Europe — London, Paris, Rome, Madrid, Amsterdam — could be damaged or destroyed.

Military responses to perceived national security issues by any of the countries in the region whether it be North Korea, China, Russia or the United States will be disastrous for peoples over the entire planet.

We citizens must not let our governments continue confrontation instead of dialogue to resolve national security issues. The lives of people around the world are at stake. We must not let those who make money and political status out of war win again and start another horrific war for “peace.”

Ann Wright is a 29-year U.S. Army/Army Reserves veteran who retired as a colonel and a former U.S. diplomat who resigned in March 2003 in opposition to the war on Iraq.  She served in Nicaragua, Grenada, Somalia, Uzbekistan, Kyrgyzstan, Sierra Leone, Micronesia and Mongolia.  In December 2001 she was on the small team that reopened the U.S. Embassy in Kabul, Afghanistan.  She is the co-author of the book Dissent: Voices of Conscience.

7 comments for “Largest US & NATO Naval Drills in Pacific”