The process of colonialism dispossessed African farmers and converted them into either landless workers, unpaid labor tenants or the rural unemployed, writes Vijay Prashad. 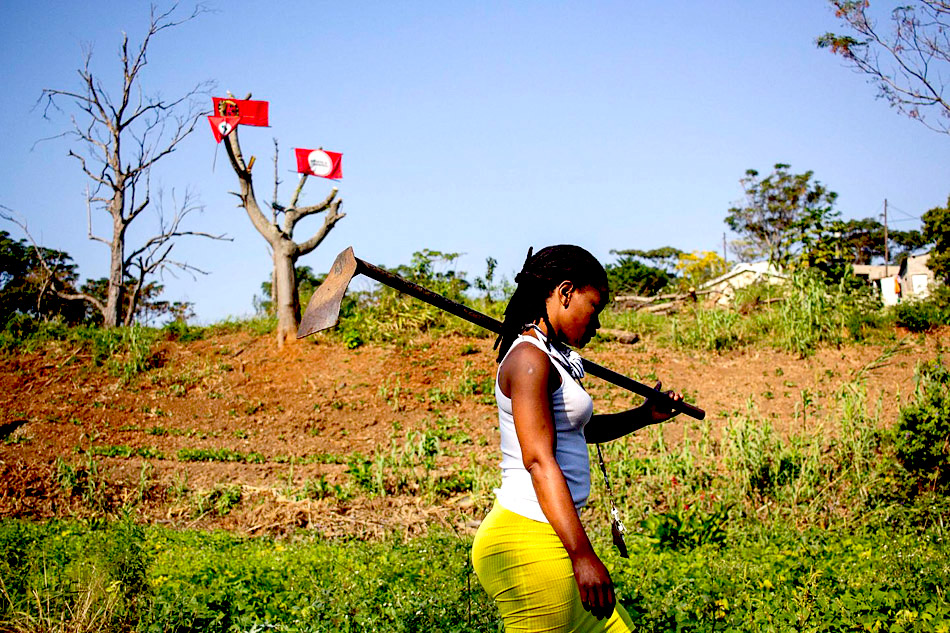 In March, United Nations Secretary-General António Guterres warned of a “hurricane of hunger” due to the war in Ukraine.

Forty-five developing countries, most of them on the African continent, he said, “import at least a third of their wheat from Ukraine or Russia, with 18 of those import[ing] at least 50 percent.” Russia and Ukraine export 33 percent of global barley stocks, 29 percent of wheat, 17 percent of corn and nearly 80 percent of the world’s supply of sunflower oil.

Farmers outside of Russia and Ukraine, trying to make up for the lack of exports, are now struggling with higher fuel prices also caused by the war. Fuel prices impact both the cost of chemical fertilizers and farmers’ ability to grow their own crops. Maximo Torero Cullen, chief economist at the U.N.’s Food and Agriculture Organization, said that “one of every five calories people eat have crossed at least one international border, up more than 50 percent from 40 years ago.” This turbulence in the global food trade will certainly create a problem for nutrition and food intake, particularly amongst the poorest people on the planet.

Poorer countries do not have many tools to stem the tide of hunger, largely due to World Trade Organization (WTO) rules that privilege subsidy regimes for richer countries but punish poorer ones if they use state action on behalf of their own farmers and the hungry. A recent report by no less than the WTO, International Monetary Fund, World Bank and Organisation for Economic Cooperation and Development provided evidence of these subsidy advantages from which wealthier countries benefit.

At the 12th WTO ministerial conference in mid-June, the G-33 countries will seek to expand the use of the “peace clause” (established in 2013) to allow poorer countries to protect their farmers’ livelihoods through the state procurement of food and enhanced public food distribution systems. 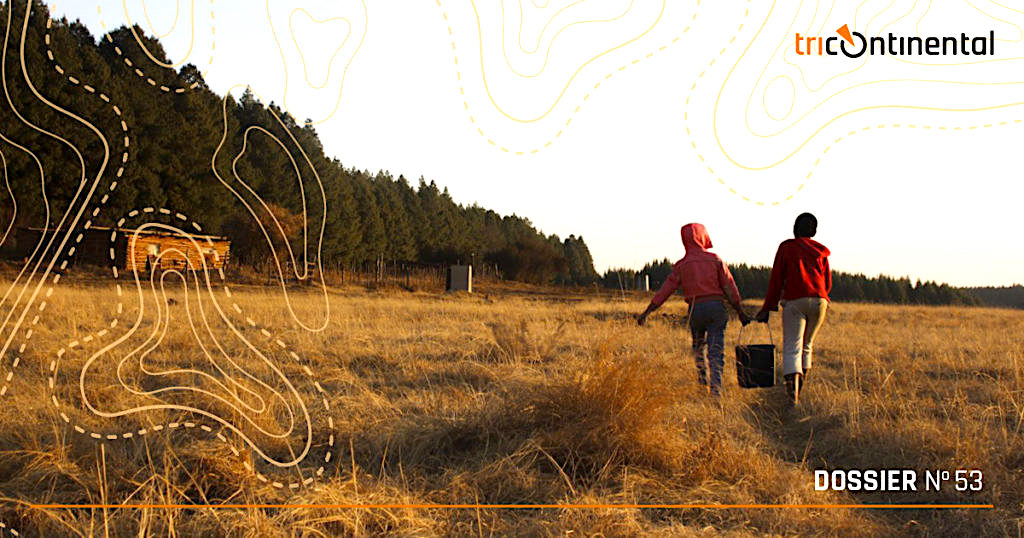 Those who grow our food are hungry, yet, stunningly, there is little conversation about the poverty and hunger of farmers, peasants, and agricultural workers themselves.

More than 3.4 billion people – nearly half the world’s population –live in rural areas; amongst them are 80 percent of the world’s poor. For most of the rural poor, agriculture is the principal source of income, providing billions of jobs. Rural poverty is reproduced not because people do not work hard, but because of the dispossession of rural workers from land ownership and the withdrawal of state support from small farmers and peasants.

Tricontinental: Institute for Social Research (South Africa) has been paying very close attention to the plight of farmworkers in the region as part of our overall project to monitor the “hurricane of hunger.”

Our most recent dossier, “This Land Is the Land of Our Ancestors,” is a fine-grained study of farmworkers from their own perspective. Researcher Yvonne Phyllis travelled from KwaZulu-Natal to the Western and Northern Cape provinces interviewing farmworkers and their organizations to learn about the failures of land reform in South Africa and its impact on their lives. This is one of the few dossiers that begins in the first person, reflecting the intimate nature of politics surrounding the land issue in South Africa.

“What does the land mean to you?” I asked Yvonne while we were together in Johannesburg recently. She answered:

“I grew up on a farm in Bedford, in the Eastern Cape province. My upbringing gifted me some of the best lessons of my life. One lesson was from the community of farmworkers and farm dwellers; they taught me the value of being in community with other people. They also taught me what it means to nurture and cultivate land and how to make my own meaning of what land is to me. Those lessons have informed my personal beliefs about the nature of land. All people deserve to live from the land. Land is not only important because we can produce from it; it forms part of people’s histories, humanity and cultural heritage.” 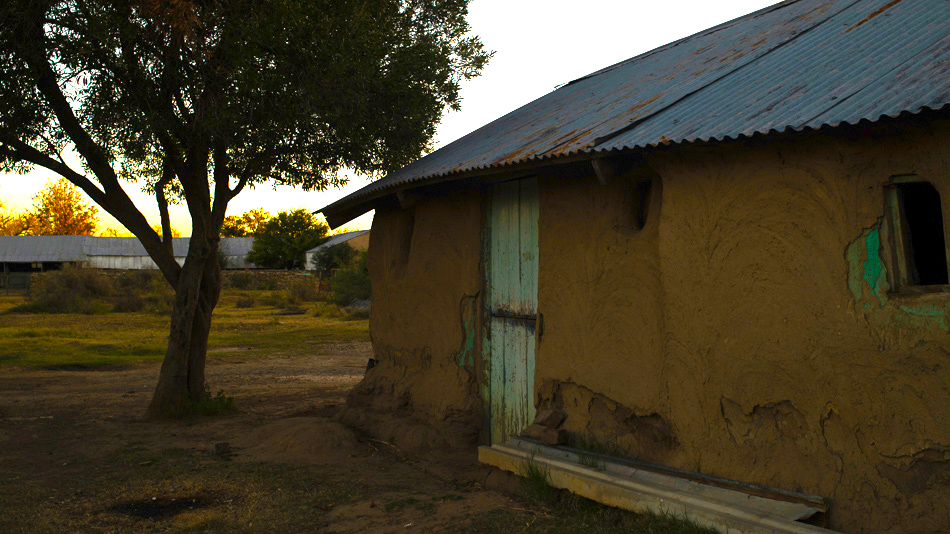 Six generations of the Phyllis family have lived in this house and worked on this farm. (New Frame, Andy Mkosi)

The process of colonialism by Dutch (Boer) and British settlers dispossessed African farmers and converted them into either landless workers, unpaid labor tenants or the rural unemployed. This process was hardened by the Native Land Act (No. 27 of 1913), whose legacy continues to be felt today. Seventeen-year-old composer Reuben Caluza (1895–1969) responded to the law with his “Umteto we Land Act” (“The Land Act”), which became one of the first anthems of the liberation movement in the country:

The Freedom Charter (1955) of the African National Congress (ANC) and its allies promised those who struggled against apartheid, which formally ended in 1994, that “The land shall be shared among those who work it.” This promise was alluded to again in the 1996 South African Constitution, chapter 2, section 25.5, but it excludes explicit mention of farmworkers. 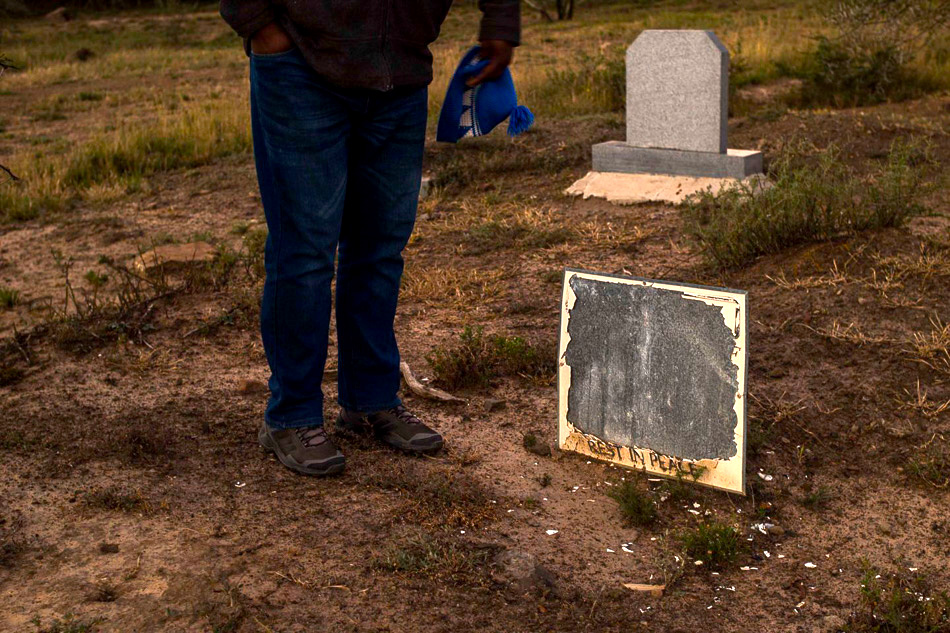 This is the site of the ancestral graveyard of the Phyllis family on which Yvonne’s father Jacob and their family worked, June 6, 2021. (New Frame, Andy Mkosi)

In fact, right from the 1993 Interim Constitution, the new post-apartheid system defended the rights of farm owners through a “property clause” in chapter 2, section 28.

Differences within the ANC led to the abandonment of the more progressive Reconstruction and Development Programme (RDP) in favor of the neoliberal Growth, Employment and Redistribution (GEAR) strategy — a self-imposed structural adjustment program.

What this meant was that there were simply insufficient political will and state funds allocated for the land restitution, land tenure reform and land redistribution programs. As our dossier notes, to this day the promises of the Freedom Charter have yet to be fulfilled.

Rather than expropriate land from the primarily white land-owning class to compensate for historical injustices, the state provides for compensation to landowners and operates on the principle of “willing buyer, willing seller.”

Bureaucratic red tape and a lack of funds have sabotaged any genuine land reform project.

In his 2014 Ruth First Lecture, Irvin Jim, general secretary of the largest trade union in the country, the National Union of Metalworkers of South Africa (NUMSA), noted that the centenary of the 1913 Land Act was not commemorated by the government but only by the militant strike by farmworkers in 2012 and 2013.

“The strike is still fresh in our memories,” Jim said. “It continues to highlight the colonial historical fact that the land, and the produce that comes from it, are not being equitably shared among those who work the land.”

Due to the neoliberal orientation of the land question, some of the programs set up for restitution and redistribution have ended up benefitting large landholders over subsistence farmers and lifelong farmworkers. 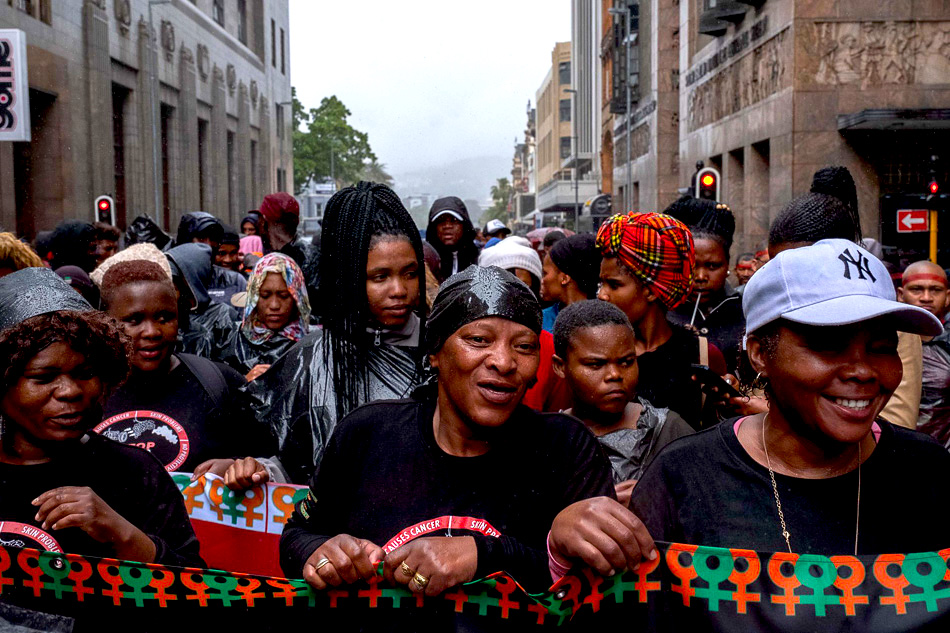 Former laborers, from left to right, Freeda Mkhabela, Lucia Foster and Gugu Ngubane are among the activists struggling against landlessness as well as poor pay and working conditions and for better treatment of farmworkers, May 26, 2021. (New Frame, Mlungisi Mbele)

A genuine agrarian reform project in South Africa would not only meet the cries for justice from the land but would also provide a pathway to deal with the hunger crisis in the countryside. Our dossier ends with a six-point list of demands developed from our conversations with farmworkers and their organizations:

Loo ngumhlaba wookhokho bethu! This is the land of our ancestors! That’s the slogan that gives our dossier its title. It is about time that those who work the land get to own the land.

6 comments for “Land in South Africa & Those Who Work It”