When the U.S. wants to reform certain murderous foreign leaders it can simply provide them with private seminars, according to an addled imperialist think tanker quoted by Politico. 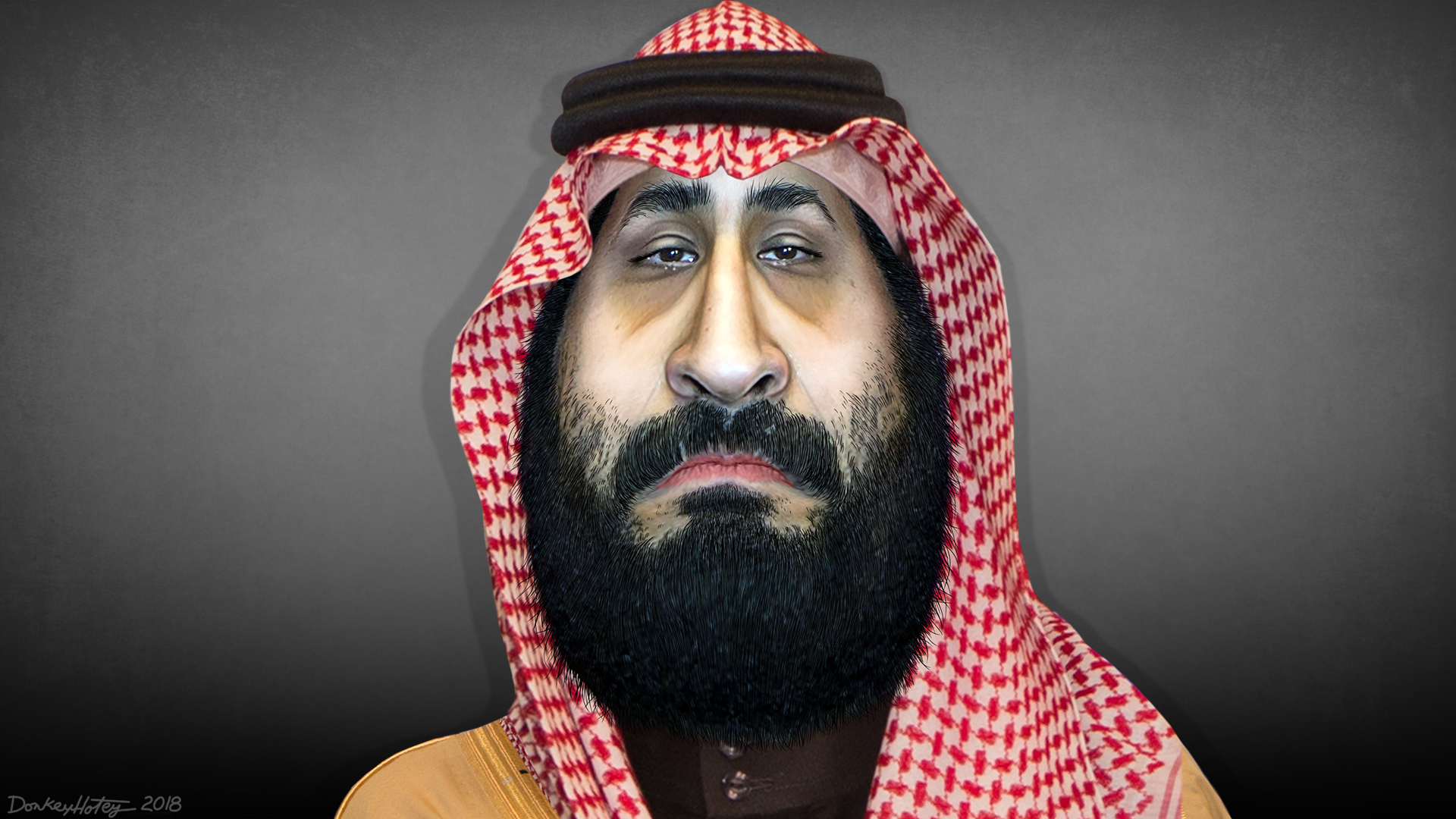 A recent article in Politico’s Lockheed Martin-sponsored National Security Daily newsletter featured a quote from an empire think tanker who argues that the tyranny of Saudi Arabia’s murderous Crown Prince Mohammed bin Salman (MbS) can be tempered by sending him to seminars.

In “Saudi Arabia shows Biden can’t have it all,” Politico describes an entirely imaginary conflict of presidential interests between a sincere desire to prioritize humanitarian concerns in Saudi Arabia and a need to maintain warm relations with Riyadh to keep oil prices low amid Washington’s economic war against Moscow.

I say entirely imaginary because of course the U.S. would happily turn a blind eye to Saudi royals using babies for skeet shooting as long as they continued to advance U.S. fossil fuel interests.

The article features all the usual mundane empire apologia you’d expect from a mainstream publication that is funded by war profiteers (the newsletter was sponsored by Northrop Grumman before Lockheed Martin).

But one part stands head-and-shoulders above the rest in terms of sheer foam-brained idiocy. Arguing that the U.S. can advance both its fossil fuel interests and its super important humanitarian concerns, a denizen of the imperial hivemind named Kirsten Fontenrose is cited in the following text (emphasis mine):

“Using Saudi Arabia to lower gas prices and secure geopolitical gains doesn’t have to be divorced from human rights promotion if the U.S. molds the wayward crown prince into a moral king.

“Shaping young leaders into the types of decision makers America would like as partners takes mentoring, monitoring and shaping,” said KIRSTEN FONTENROSE, a former top Middle East official on Trump’s National Security Council. “There is no reason we can’t establish something akin to a private seminar series for MBS and the inner circle as well as other young leaders in the Gulf or elsewhere around the globe.”

So, in Fontenrose’s empire-addled brain, the U.S. can simply provide private seminars for not just MbS but other foreign leaders as well, teaching them not to do atrocities and war crimes. And this will reconcile the glaring dissonance between what the U.S. government says it values and what it actually does.

This quote belongs in a museum somewhere. Seen a lot of bad policy proposals but few match this combination of arrogance (America must teach foreign heads of state how to do their jobs) and futility (as if they'd even attend, let alone be "shaped" by it) https://t.co/5lw6nHJq0g pic.twitter.com/QSpG9XsJXn

Fontenrose is a nonresident senior fellow at the Atlantic Council, a NATO-entrenched think tank that is funded by government entities, the military-industrial complex, fossil fuel companies and plutocrats. 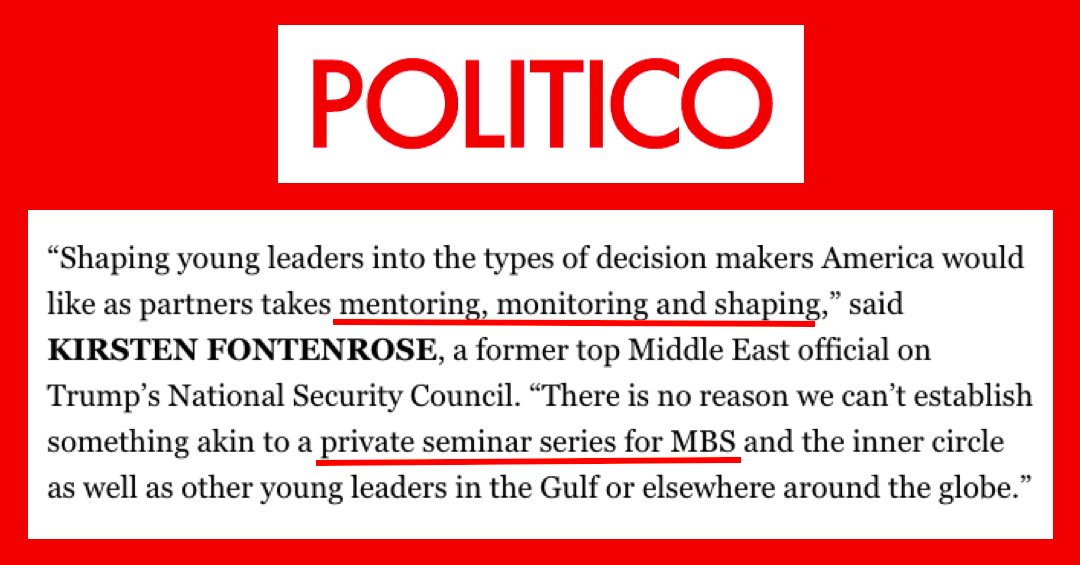 When questioned by The American Prospect last year about the Atlantic Council having received millions from Gulf state monarchies, Fontenrose responded, “Every think tank in Washington gets money from Middle East governments.”

This is true. Generally speaking, think tanks are institutions wherein academics are paid by the worst people in the world to come up with intelligent-sounding reasons why it would be good and smart to do something evil and stupid. Those narratives are then inserted at key points of influence before decision makers and the public, where they are used to help make the world a worse place to live.

AVOIDING ACCOUNTABILITY AND TRANSPARENCY: THE BLOB EDITION – brought to us by @mideastXmidwest & Kirsten Fontenrose

This is not the sort of dynamic which lends itself to lucid thinking. Fontenrose’s Atlantic Council bio reads like a recipe for turning a human brain into a cog in the imperial machine: from Harvard to the National Council on U.S.-Arab Relations, to “building relationships with military officers and diplomats from the Middle East and South Asia for the Near East Center for Strategic Studies at the National Defense University,” to positions in the Pentagon and State Department, to senior director for the Gulf at the Trump administration’s National Security Council and then on to the Atlantic Council.

And at the Atlantic Council she shall wait, spewing imperial gibberish and earning handsome paychecks, until it’s time for the revolving door of the Beltway swamp to usher her back into a government position again.

These are the kind of people who run the world. The imperial machine is packed to the rafters with sniveling power worshippers of this variety, people who choose to spend their lives clawing their way up into positions of influence within the most depraved power structure on the face of this planet, demonstrating their worthiness by their continual willingness to advocate awful things no matter how reckless or stupid.

This is why the world is as it is. The systems which allocate power and wealth elevate the worst among us to the most consequential of positions, where they are then free to act out their own inner misery on the rest of humanity and keep us in a state of suffering and trauma. Nothing will get better until we change those systems.