The press has been neither humiliated nor found out because most of the country still believes the lies they were told and have not seen corrected.

The comments on Peter Oborne’s excellent article on Julian Assange in The Guardian on May 20 are a damning indictment of the media’s ability to instill near universal acceptance of “facts” which are easily proven lies.

The Guardian chose a comment full of these entirely untrue assertions as its “Guardian pick” to head the section: 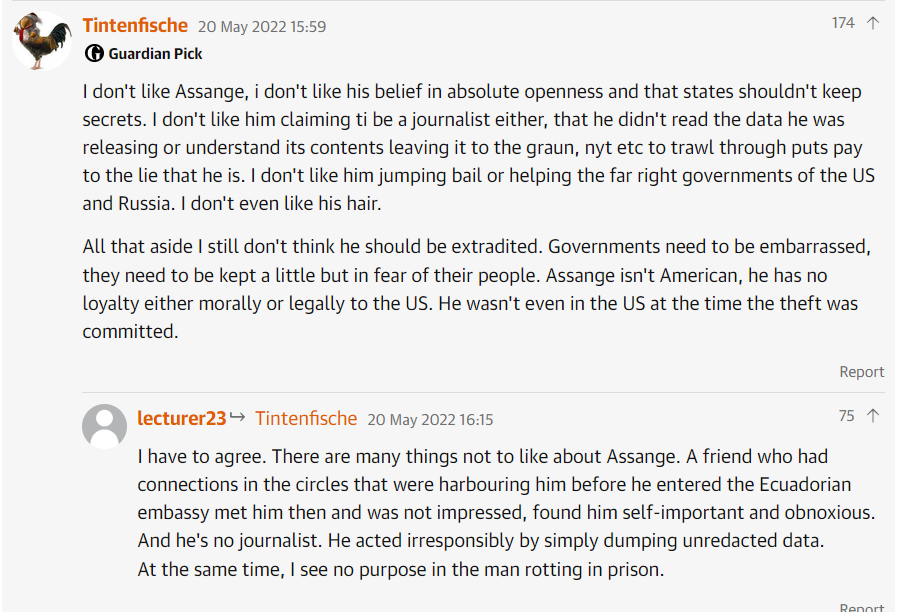 If you look through all the comments, they repeat again and again that Wikileaks published un-redacted documents, including names of U.S. agents, which put lives at risk. The entire basis of most of the comments is simply untrue – and none of the readers seems to have any information to contradict them.

Nor has Wikileaks ever dumped data unread and unedited onto the internet. The commenter is correct to say that Wikileaks has shared editing responsibilities with organisations including The Guardian and The New York Times. This is precisely because the material needs to be edited to avoid revealing inappropriate material, and to make journalistic decisions on what to write stories about.

The notion that Assange was “lazy” because he did not read all the material and do all the editing himself is self-evidently ridiculous. The U.S. diplomatic cables and Iraq and Afghan war logs alone constituted over 600,000 documents. It was simply impossible for Assange to read it all personally. He was the editor of Wikileaks. This is tantamount to criticising Katherine Viner for not writing every single article in The Guardian personally.

The extradition hearing of Julian Assange heard numerous highly professional and respected journalists testify to the rigorous nature of Wikileaks’ editing process to remove names. Here is one extract from my reporting of the trial:

“John Goetz was the first witness this morning. Senior Investigations Editor at NDR since 2011, he was at Der Spiegel from 2007-11. He had published a series of articles on German involvement in the Afghan War, including one on a bombing raid on Kunduz which massacred civilians, for which he had won Germany’s highest journalism award. In June 2010 he went to London to meet with Wikileaks and the Guardian to work on the Afghan War Logs.

In a series of meetings in ‘the bunker’ at the Guardian with the NYT and the other major media partners, the partnership was formed whereby all would pool effort in researching the Afghan War Logs but each party would choose and publish his own stories. This cooperative venture between five major news organisations – normally rivals – was unique at the time.

Asked by Mark Summers to characterise the Afghan War Logs, Goetz said that they were fascinating first-hand material giving low level reports on actual operations. This was eye witness material which sometimes lacked the larger view. There was abundant first-hand evidence of war crimes. He had worked with Nick Davies of the Guardian on the Task Force 373 story.

Julian Assange had been most concerned to find the names in the papers. He spent a lot of time working out technical ways to identify names in the tens of thousands of documents. Mark Summers asked f he had been looking for the names for the purpose of redaction, and Goetz confirmed it was for redaction. He had interviewed Assange on the harm minimisation programme of the operation.

On behalf of the group Eric Schmitt of the NYT had been speaking to the White House and he had sent an email identifying 15,000 documents the White House did not want published to prevent harm to individuals or to American interests. It was agreed not to publish these documents and they were not published. Summers asked Goetz if he was aware of any names that slipped through, and he replied not.

Goetz was not so involved for family reasons when the consortium went through the same process with the Iraq war logs. But he knew that when a large number of these were released in the USA under a FOIA request, it was seen that Wikileaks had redacted those they released more heavily than the Department of Defense did. Goetz recalled an email from David Leigh of the Guardian stating that publication of some stories was delayed because of the amount of time Wikileaks were devoting to the redaction process to get rid of the ‘bad stuff’”.

Further very detailed evidence on this point was given by Professor John Sloboda, by Nicky Hager and by Professor Christian Grothoff.

Yet there is no public awareness that this careful editing and redaction process took place at all. That is plain from those comments under The Guardian article. This is because people are simply regurgitating the propaganda that the media has given them.

My blog was effectively the only source for detailed reporting of the Assange hearings, which were almost ignored by the mainstream media. [Consortium News had access to the courtroom every day and filed daily written and video reports.]

This was deliberate choice – the information was freely available to the mainstream media. This is what the Reuters News Agency, to which they all subscribe, produced on Dr Goetz’s evidence, for example:

LONDON, Sept 16 (Reuters) – WikiLeaks’ founder Julian Assange was careful to ensure that the names of informants in hundreds of thousands of leaked secret U.S. government documents were never published, his London extradition hearing was told on Wednesday.

Australian-born Assange, 49, is fighting against being sent to the United States, where he is charged with conspiring to hack government computers and violating an espionage law over the release of confidential cables by WikiLeaks in 2010-2011.

A lawyer for the United States told the court last week that it was requesting Assange’s extradition over the publication of informants’ names, and not for handling leaked documents.

John Goetz, an investigative reporter who worked for Germany’s Spiegel magazine on the first publication of the documents, said the U.S. State Department had been involved in a conference call suggesting redactions, and WikiLeaks had agreed to hold back about 15,000 documents for publication.

“There was sensitivity and it was one of the things that was talked about all the time,” Goetz told the court. Assange was concerned that the media should take measures “so no one would be harmed”, he said.

Goetz said WikiLeaks was later frustrated when a password that allowed access to the full, un-redacted material was published in a book by Guardian reporters in February 2011.

Assange made international headlines in 2010 when WikiLeaks published a U.S. military video showing a 2007 attack by Apache helicopters in Baghdad that killed a dozen people, including two Reuters news staff.”

I can find no evidence that any mainstream media used this report from Reuters, or indeed any of Reuters’ daily news feed that covered the major points for the defence. The BBC managed to report prominently the false claim that has entered public consciousness: 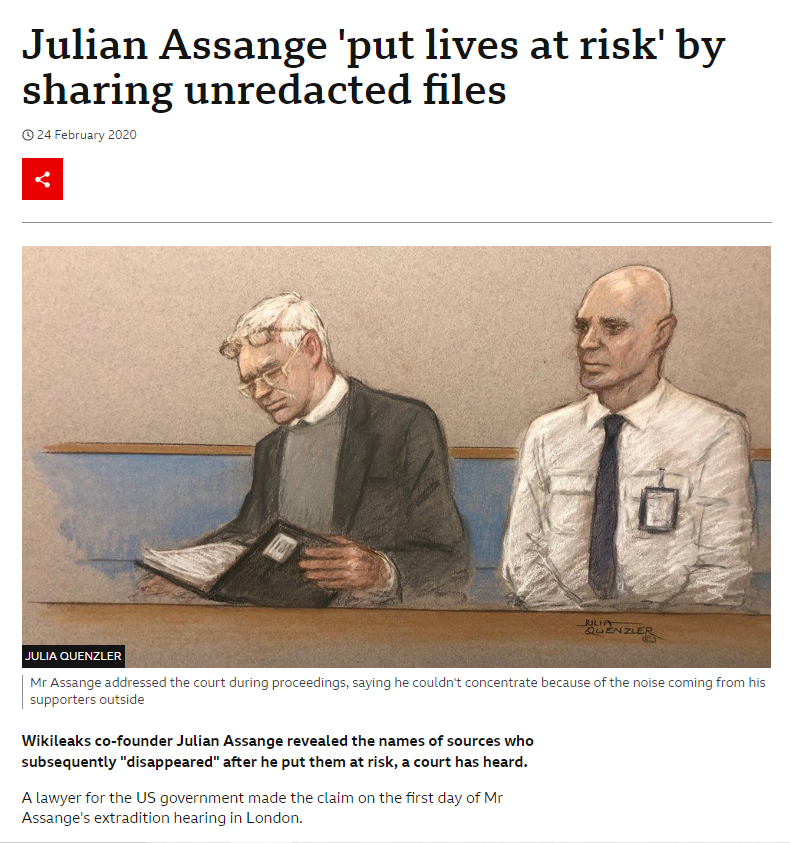 But could not find space for any of the witnesses who contradicted this claim.

It is of course a very delicate subject for The Guardian, whose journalists David Leigh and Luke Harding were in fact responsible for the dumping of un-redacted material on the net. The court heard evidence of this from numerous witnesses, of whom Professor Christian Grothoff gave the most detail:

Grothoff continued to explain that on 25 August 2011 the magazine Der Freitag had published the story explaining what had happened. It did not itself give out the password or location of the cache, but it made plain to people that it could be done, particularly to those who had already identified either the key or a copy of the file. The next link in the chain of events was that nigelparry.com published a blog article which identified the location of a copy of the encrypted file. With the key being in David Leigh’s book, the material was now effectively out. This resulted within hours in the creation of torrents and then publication of the full archive, unencrypted and unredacted, on Cryptome.org.

Summers asked whether Cryptome was a minor website. Grothoff replied not at all, it was a long established platform for leaked or confidential material and was especially used by journalists.”

It is telling that in The Guardian itself, scores of commenters on Oborne’s article reference the release of un-redacted files, but nobody seems to know that it was The Guardian that was actually responsible, or rather, massively irresponsible. The gulf between public perception and the truth is deeply troubling.

In a related matter, the editorial board of The Wall Street Journal has published an article with that attribution about the “Russiagate” hoax around the 2016 election, which is stunning:

“The Russia-Trump narrative that Clinton sanctioned did enormous harm to the country. It disgraced the FBI, humiliated the press, and sent the country on a three year investigation to nowhere. Putin never came close to doing as much disinformation damage.”

The problem is The Wall Street Journal has one thing wrong. The press is not humiliated – like Boris Johnson, it is entirely brazen and has no capacity for humiliation. The press has not been found out, because most of the country still believes the lies they were told and have not seen corrected.

Hillary’s 2016 campaign manager has stated “Russiagate” was a lie knowingly planted by Hillary. Mueller could find no firm evidence of Russian hacking, and the CEO of CrowdStrike, the Clinton appointed firm who made the original claim, testified to congress there was “no hard evidence”.

Neither the FBI nor Mueller even inspected the DNC servers. The Christopher Steele “peegate” dossier has fallen apart and is now a thing of ridicule. Roger Stone was jailed for false evidence to the FBI – which consisted of him inventing a Wikileaks-Trump link for purposes of self-aggrandisement. The Manafort/Assange story was the most egregious press fabrication since the Zinoviev letter.

But the media who pushed all these false narratives have never backed away from them.

My favourite example ever of almost entirely unreported news was the dismissal by New York federal judge John Koeltl of the Democratic National Committee’s lawsuit against Trump and the state of Russia over the 2016 elections. Judge Koeltl ruled that nothing whatsoever had been produced which met the bar of evidence.

There is plainly a crisis in western neo-liberal societies. The wealth gap between rich and poor has become so extreme as to be insupportable, and even in the wealthiest countries in the world, people in employment are struggling to achieve decent accommodation, heating and food. The billionaire-controlled state and media systems contrived to neuter both Jeremy Corbyn and Bernie Sanders, who sought to restore some social justice.

In consequence, inevitable public discontent has been channelled into populist courses – Brexit, Trump, Johnson – which themselves alarm the establishment, though less than Sanders and Corbyn did. There is a space for comforting fiction to explain the social shock.

Therefore the populist wave is explained, not as a result of popular discontent at the extreme economic imbalance of modern neo-liberalism, but by the Deus Ex Machina of hacking, or Cambridge Analytica, all of which is then itself sourced back to the designated devil Putin.

Modern society is not really much more rational than the Middle Ages. Myth is still extremely potent. Only the means of myth dissemination are more sophisticated.

15 comments for “Craig Murray: The Power of Lies”