Did Hizbullah really receive a devastating blow in the elections? As`ad AbuKhalil says the answer is not as simple as Western coverage makes it seem. 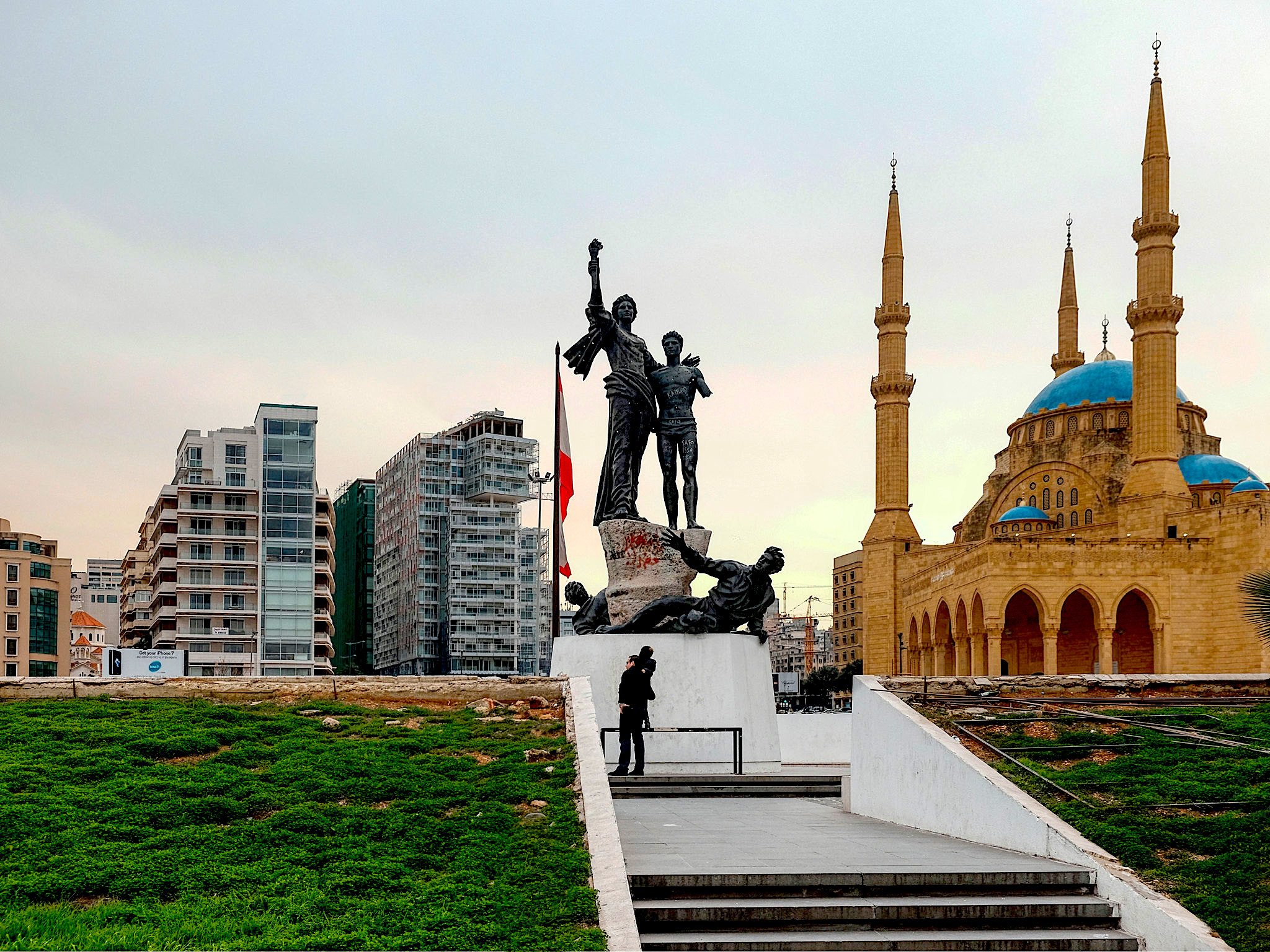 The gist of Western headlines about Lebanon’s election earlier this month were the same: that either Hizbullah and its bloc suffered a severe blow or Western allies won hands-down.

In the 128-seat Lebanese Parliament, 65 seats are needed for a majority. In the 2018 election, Hizbullah and its allies held 71 seats. Western media reports give differing results, but all put Hizbullah’s bloc below 65 seats.

The Washington Post reported that it got 61 seats, al Jazeera said 58, Reuters and the BBC put it at 62, and The New York Times only says it fell below 65, but doesn’t give a number. Hizbullah’s bloc still won the most seats. But no party won an outright majority. Hizbullah wants a national unity government, but other parties, under Saudi pressure, are refusing to create one.

Hizbullah still has has a substantial bloc in Parliament and its military wing is much stronger than the Lebanese army, so it is still the major force to reckon with. At this point for Western media to say Hizbullah lost is misleading.

More than at any other time in my political memory, Western coverage of  Lebanon and the Middle East in general can’t be trusted.

In my youth, we clamored to read European correspondents, and even some American ones, who defied the norms and taboos of the ruling Establishment and of Israeli lobbies.  To be sure, some suffered from acute or mild cases of Orientalist understanding of the region, but there were many who were more insightful than their academic counterparts: people like Peter Mansfield, Eric Ruleau, Patrick Seale, Jim Muir, Arnold Hottinger and John Cooley.

In recent years, only Tony Shadid (of The New York Times in his last years, after stints at The Washington Post and Boston Globe) truly tried to violate the Western conventional wisdom of the Middle East, which rigidly set in after the eruption of the war in Syria.

Since the Arab uprisings of 2011, Western media have become largely uniform, with the dispatches of various correspondents replicating one another. Cliches and biased reporting — advocacy journalism — became the norm.  Championing the Syrian rebels galvanized Western reporting and the crimes of the regime were highlighted while the crimes of the Syrian rebels were deliberately concealed or even justified.

Furthermore, many Western correspondents (who suffer from acute cases of language deficiency) rely now on local journalists employed by Gulf media. They have come, to a large extent, to reflect Gulf media, which in turn coincides with the agenda of Western governments in the region.

Opposition to the enemies of Israel and support for pro-U.S. regimes are constant principles.  The coverage by people such as Martin Chulov, Ben Hubbard (who actually knows Arabic) and Liz Sly rarely deviates from the political orientations of Western and Gulf governments. 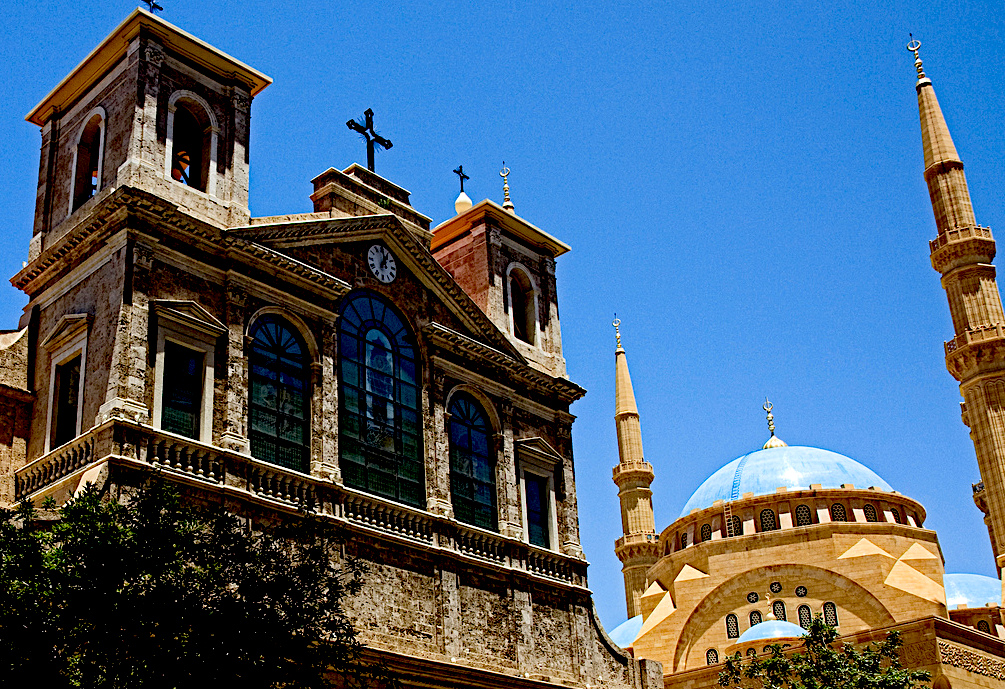 Did Hizbullah really receive a devastating blow? The answer is not as simple as it seems, given the complexities of Lebanon’s electoral law. Districts are divided regionally and people vote for a list and also for a candidate in a list.

This law is intrinsically unfair, however, because Lebanon maintains a Christian-Muslim parity in representation despite a two-thirds Muslim majority.  A Hizbullah member of parliament can win with 48,000 votes while a Christian MP can win with 400 votes in Beirut 1 district.

On the Shiite front — and Hizbullah is a Shiite political party, through and through — the party won all the seats it sought, every one of them.  Similarly, its close Shiite ally, the Amal Movement, won all its seats.  So, these allies won 100 percent of the Shiite seats of parliament. (Seats in parliament and posts in government are designated by sect in the system set up by the French colonial government after World War I.)

Moreover, the chief Christian ally of Hizbullah, the Tayyar Party (Free Patriotic Movement) of President Michel Awn  won close to 22 seats with its allies.  There was an international and regional war on Tayyar in the hope that it would deprive Hizbullah of its Christian ally in order to isolate it in Lebanon politics.  American diplomacy focused on weakening Tayyar in favor of its more right-wing competitor, the Lebanese Forces. The U.S. even imposed sanctions on Gebran Basil, leader of Tayyar. 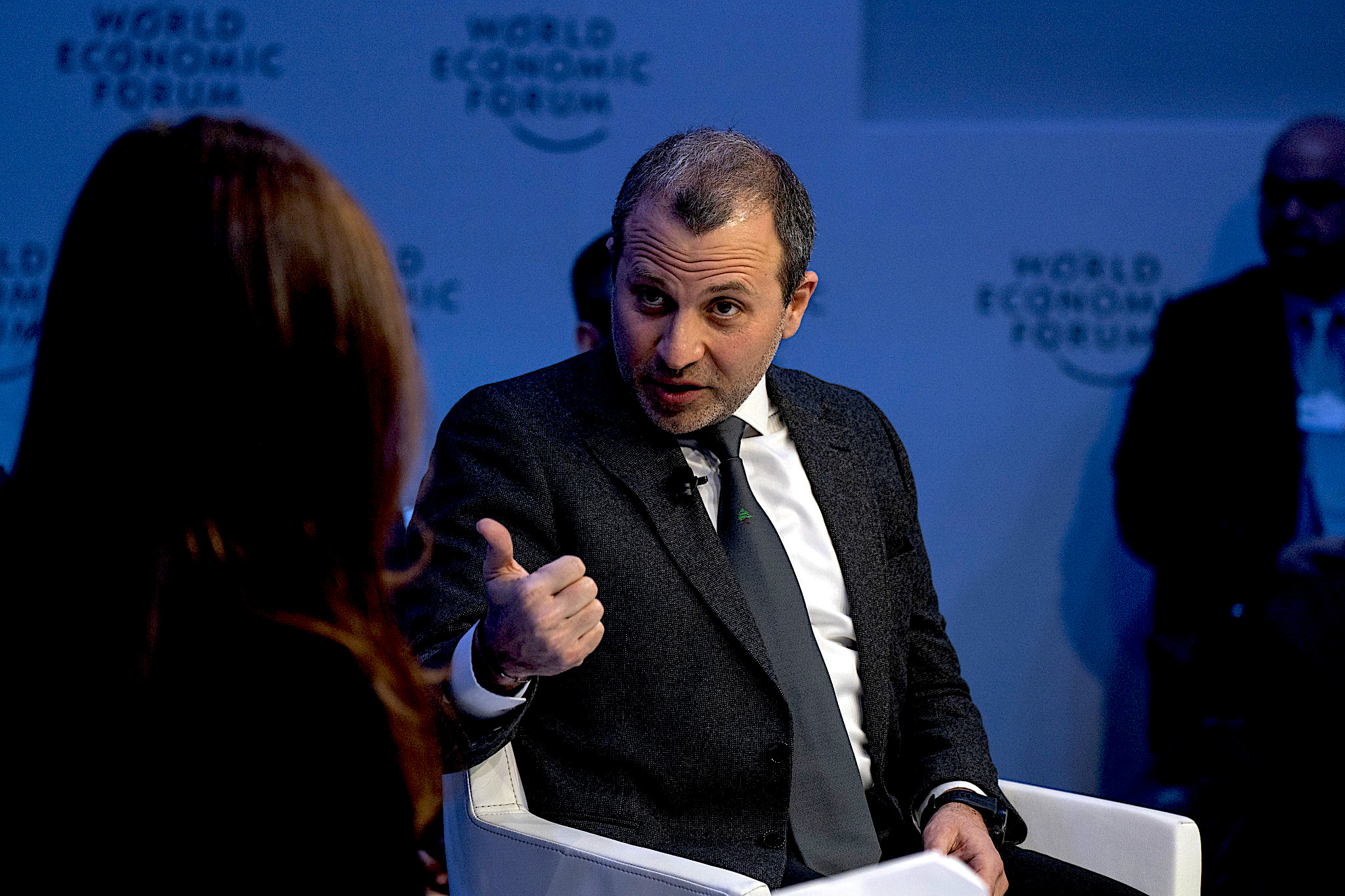 Saudi Arabia was the chief financier of this campaign and its ambassador in Beirut intervened blatantly in supporting candidates, as did the U.S. ambassador who visited the city of Zahle for electioneering purposes.

Other Western governments didn’t seem to throw much money in this cycle. Nor did Iran. But Saudi Arabia and the U.A.E. clearly helped the cause of right-wing sectarian parties. The Lebanese Forces of convicted war criminal Samir Ja`ja` (trained and sponsored by Israel during the war), were the favorites and people in Lebanon were amazed at the cost of LF’s lavish advertisements on billboards all over Lebanon. The Lebanese Forces are now the chief conduit of Saudi and U.A.E. money. 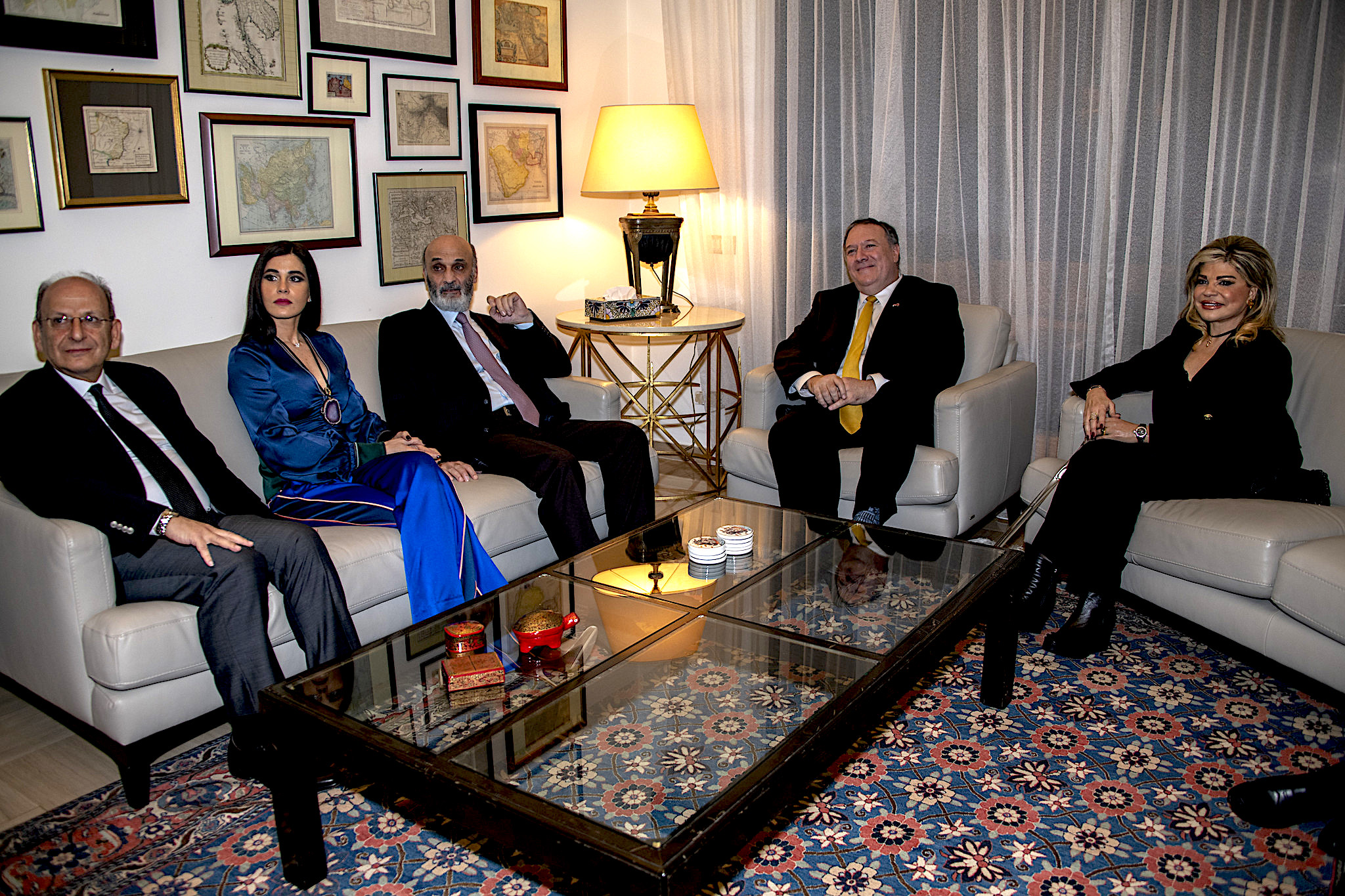 Samir Ja’ja,’ head of the Lebanese Forces Party, at right end of couch, in a meeting in Beirut with then U.S. Secretary of State Mike Pompeo, March 22, 2019. (State Department, Ron Przysucha)

Saudi Arabia also pushed for an alliance, for electoral purposes, between the Christian Lebanese Forces and the Druze party of Walid Jumblat.  Both did quite well in the election, and the Lebanese Forces benefited from the decline in fortunes of Awn’s Tayyar.

Jumblat engaged in an intense sectarian campaign in which he leveled unfounded accusations that Syria and Iran — and possibly Cuba — were out to cancel him from political life in Lebanon.  In effect, Jumblat defeated his opponents and even siphoned votes from his own candidates in favor of the new “civil society” candidates, who were favored by Western embassies and donors (most were active in Western-funded civic groups).

As the results have produced a hung parliament, “the change candidates” (as U.S officials first dubbed the civic candidates) won something like 10 percent of the 128-seat parliament and could play a balancing role. They are more likely to side with the right-wing Western/Gulf supported coalition.

The thorny issues before the parliament are likely to center on economic recovery programs, since living conditions in Lebanon continue to drastically deteriorate. 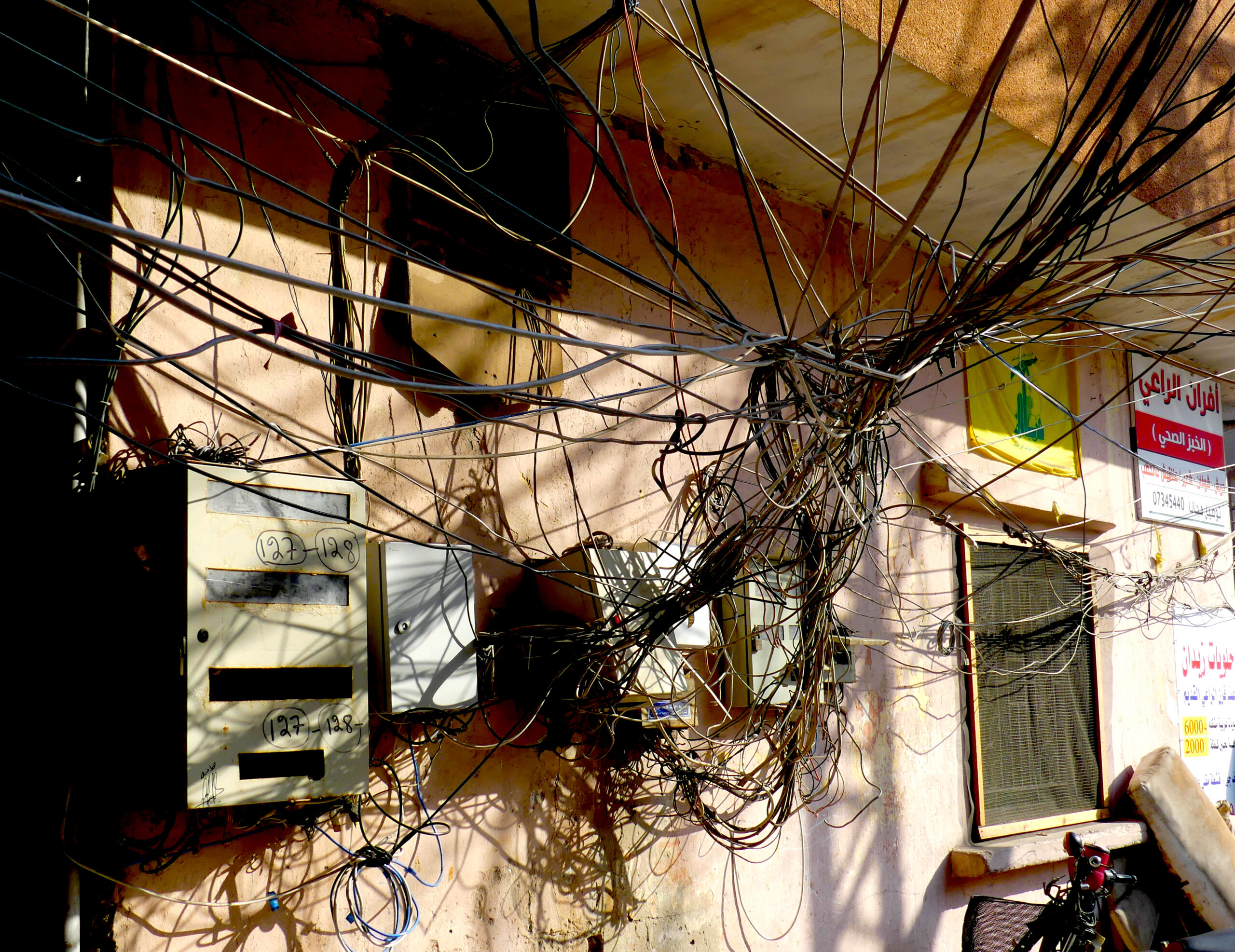 Muddle of power cables on a residential building with a yellow Hezbollah poster on right in the southern Lebanese city of Tyre/Sour, 2021. (RomanDeckert,CC BY-SA 4.0, Wikimedia Commons)

Among the many proposals being floated the one favored by big banks and Western interests is to sell off state assets to recoup losses and pay for development, especially in the energy sector.  Privatization plans are being pushed by Western and Gulf governments.  (In Egypt, the regime of President  Abdel Fattah el-Sisi has also been undergoing major privatization schemes to the benefit of Western and Gulf governments).  Privatization would also enhance the political hegemony of the allies of U.S. and Israel.

While the country is in near-collapse, the Gulf-Western alliance is merely investing in a war against Hizbullah. Disarming Hizbullah is their priority.

Israel tried to disarm Hizbullah over 33 days of war in July 2006, and was humiliated on the battlefield and it could not advance one inch on Lebanese territory. 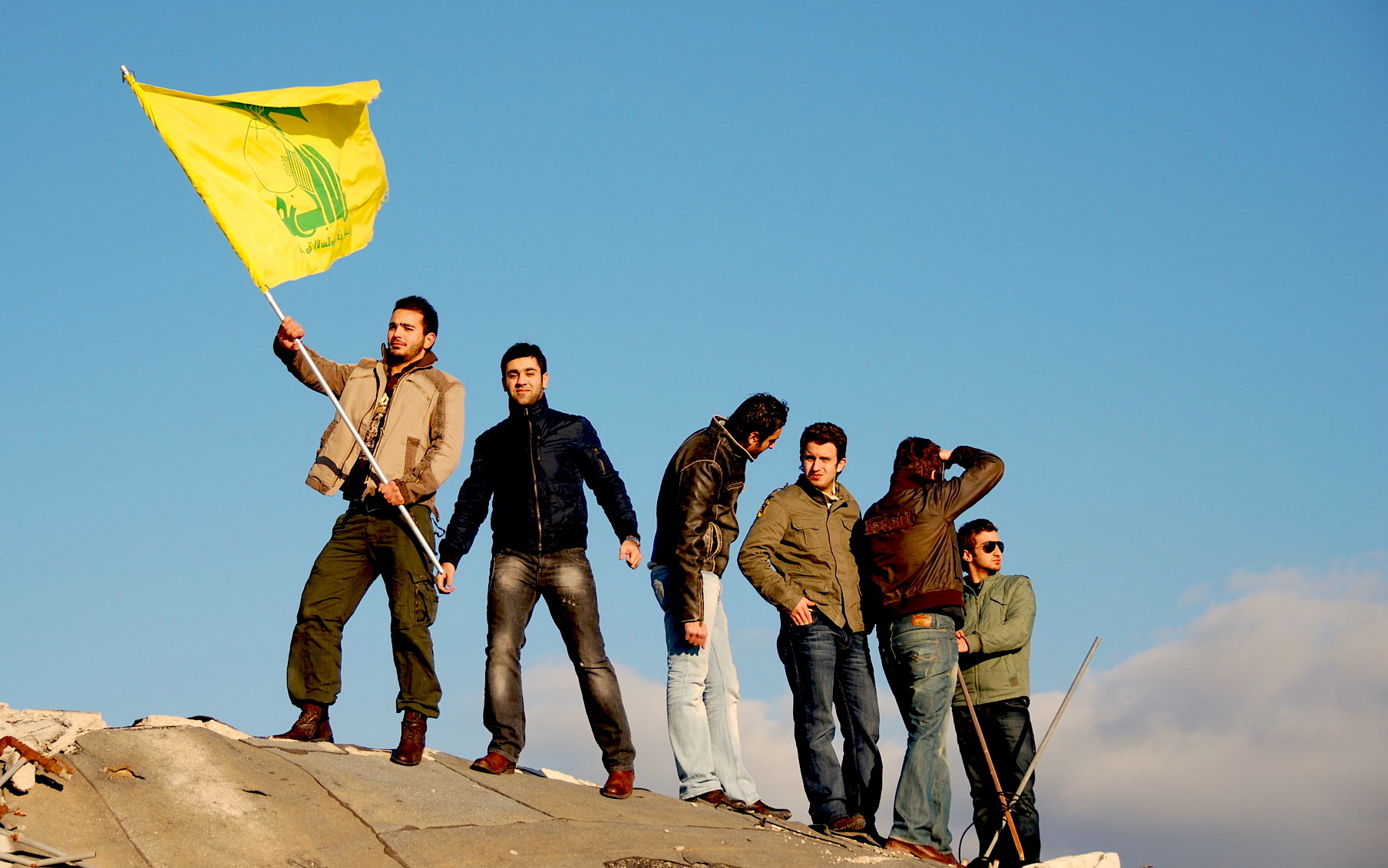 Young people in 2007 posing with Hezbollah flag on the ruins of the former SLA prison in Khiam, Lebanon. (Paul Keller, Flickr,CC BY-NC 2.0)

The Saudi-funded groups (and Western-sponsored “change” candidates) harped on the matter of disarming Hizbullah, which has no bearing on the domestic Lebanese political scene.

Disarming Hizbullah is a recipe for civil war, that no party other than Israel and Saudi Arabia favor at this moment. It is the agenda of Israel that those outside groups are pushing on the Lebanese population in the name of sovereignty.

A lot of the instability in Lebanon — but certainly not all — has been engineered by the U.S. on behalf of Israel in the wake of its defeat in the July 2006 war.

The U.S. uses elections in Lebanon (one of the few Arab countries which has relatively free, albeit corrupt elections) in order to undermine the power of its enemies. Ever since the 1950s, the U.S. has used Lebanese elections to advance its agenda in the region as a whole.

Not much change will come out of this new parliament although the new non-traditional winners will bring in a new discourse learned in NGO workshops.  The foreign policy of the new MPs will mimic the rhetoric of Western and Gulf governments.

There is very little chance that the opposing camps in parliament will reach a compromise.  The stalemate and stagnation that characterized Lebanese politics for many years are very likely to continue for several more years.

The people of Lebanon will continue to suffer and there is no accountably for the banks, which spent the money of its depositors.  In fact, the banking interests of Lebanon invested heavily in the right-wing camp and some of the new “change MPs” are also tied to banking interests.  Capitalism is not under threat in Lebanon and for that the suffering of the people will likely increase.