Cancel culture is inbuilt in the techno-feudalist project: conform to the hegemonic narrative, or else.  Journalism that does not conform must be taken down.

Utter insanity, @Twitter has suspended @RealPepeEscobar, one of Eurasia's top journalists and geopolitical analysts, with 35 years experience in the field. Twitter, kindly RESTORE this account and verify him. @elonmusk pic.twitter.com/5gSzvA7tuu

This month, several of us – Scott Ritter, myself, ASB Military News, among others – were canceled from Twitter. The – unstated – reason: we were debunking the officially approved narrative of the Russia/NATO/Ukraine war.

As with all things Big Tech, that was predictable. I lasted only seven months on Twitter. And that was long enough. Contacts in California had told me I was on their radar because the account grew too fast, and had enormous reach, especially after the start of Operation Z.

I celebrated the cancelation by experiencing an aesthetic illumination in front of the Aegean Sea, at the home of Herodotus, the Father of History. Additionally, it was heart-warming to be recognized by the great George Galloway in his moving tribute to targets of the new McCarthyism.

In parallel, comic relief of the “Mars Attacks” variety was provided by expectations of free speech on Twitter being saved by the benign intervention of Elon Musk.

Techno-feudalism is one of the overarching themes of my latest book, Raging Twenties – published in early 2021 and reviewed here in a very thoughtful and meticulous manner.

Cancel culture is inbuilt in the techno-feudalist project: conform to the hegemonic narrative, or else. In my own case regarding Twitter and Facebook – two of the guardians of the internet, alongside Google — I knew a day of reckoning was inevitable, because like other countless users I had previously been dispatched to those notorious “jails”.

On one Facebook occasion, I sent a sharp message highlighting that I was a columnist/analyst for an established Hong Kong-based media company. Some human, not an algorithm, must have read it, because the account was restored in less than 24 hours.

But then the account was simply disabled – with no warning. I requested the proverbial “review”. The response was a demand for proof of ID. Less than 24 hours later, came the verdict: “Your account has been disabled” because it had not followed those notoriously hazy “community standards.” The decision was “reviewed” and “it can’t be reversed”.

My hit-by-a-Hellfire missile Facebook page clearly identified for the general public who I was, at the time: “Geopolitical analyst at Asia Times”. The fact of the matter is Facebook algorithms canceled a top columnist from Asia Times – with a proven record and a global profile. The algos would never have had the – digital – guts to do the same with a top columnist from The New York Times or the Financial Times.

Asia Times lawyers in Hong Kong sent a letter to Facebook management. Predictably, there was no response.

Of course becoming a target of cancel culture – twice – does not even remotely compare to the fate of Julian Assange, imprisoned for over three years in Belmarsh under the most appalling circumstances, and about to be dispatched for “judgment” in the American gulag for the crime of committing journalism. Yet the same “logic” applies: journalism that does not conform to the hegemonic narrative must be taken down.

At the time, I discussed the matter with several Western analysts. As one of them succinctly put it, “You were ridiculing the U.S. president while pointing out the positives of Russia, China and Iran. That’s a deadly combination”.

Others were simply stunned: “I wonder why you were restricted as you work for a reputable publication.” Or made the obvious connections: “Facebook is a censorship machine. I did not know that they do not give reasons for what they do but then they are part of the Deep State.”

The group letter signed by the likes of Michael Morell, James Clapper, and Leon Panetta about the importance of Big Tech is horrifying. They just come out and say public information flow needs to be controlled for national security reasons. https://t.co/FwVmsRZBtU

A banking source that usually places my columns on the desks of selected Masters of the Universe put it New York-style: “You severely p****d the Atlantic Council”. No question: the specimen who oversaw the canceling of my account was a former Atlantic Council hack.

When Unz mentioned my case to renowned economist James Galbraith, “he really was quite shocked, and thought it might signal a very negative censorship trend on the Internet.”

The “censorship trend” is a fact – for quite a while now. Take this U.S. State Department 2020 report identifying “pillars of Russia’s disinformation and propaganda ecosystem.”

The late Pompeo-era report demonizes “fringe or conspiracy-minded” websites who happen to be extremely critical of U.S. foreign policy. They include Moscow-based Strategic Culture Foundation – where I’m a columnist – and Canada-based Global Research, which republishes most of my columns (but so does Consortium News, ZeroHedge and many other U.S. websites). I’m cited in the report by name, along with quite a few top columnists.

The report’s “research” states that Strategic Culture – which is blocked by Facebook and Twitter – is directed by the SVR, Russian foreign intel. This is ridiculous. I met the previous editors in Moscow – young, energetic, with enquiring minds. They had to quit their jobs because after the report they started to be severely threatened online.

So the directive comes straight from the State Department – and that has not changed under Biden-Harris: any analysis of U.S. foreign policy that deviates from the norm is a “conspiracy theory” – a terminology that was invented and perfected by the C.I.A. 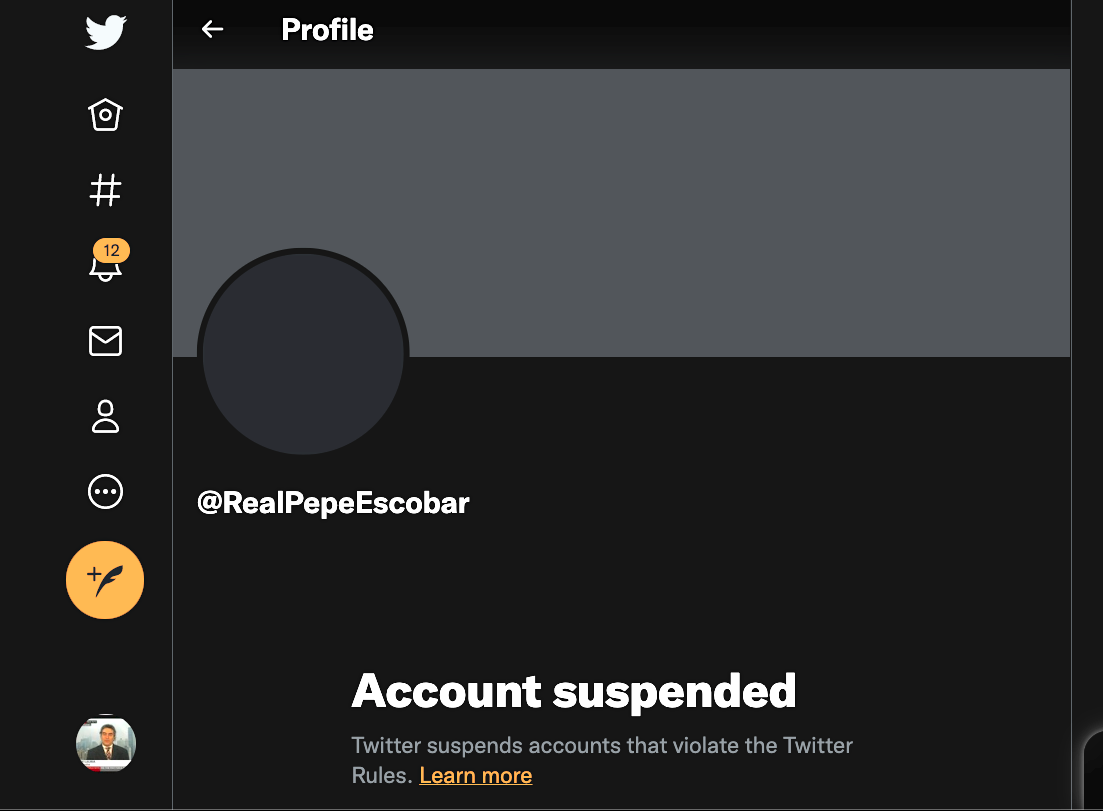 Couple it with the partnership between Facebook and the Atlantic Council – which is a de facto NATO think tank – and now we have a real powerful ecosystem.

Every silicon fragment in the valley connects Facebook as a direct extension of the Defense Advanced Research Projects Agency (DARPA)’s LifeLog project, a Pentagon attempt to “build a database tracking a person’s entire existence.” Facebook launched its website exactly on the same day – Feb. 4, 2004 – that DARPA and the Pentagon shuttered LifeLog.

No explanation by DARPA was ever provided. The MIT’s David Karger, at the time, remarked, “I am sure that such research will continue to be funded under some other title. I can’t imagine DARPA ‘dropping out’ of such a key research area.”

Of course a smokin’ gun directly connecting Facebook to DARPA will never be allowed to surface. But occasionally some key players speak out, such as Douglas Gage, none other than LifeLog’s conceptualizer: “Facebook is the real face of pseudo-LifeLog at this point (…) We have ended up providing the same kind of detailed personal information to advertisers and data brokers and without arousing the kind of opposition that LifeLog provoked.”

So Facebook has absolutely nothing to do with journalism. Not to mention pontificating over a journalist’s work, or assuming it’s entitled to cancel him or her. Facebook is an “ecosystem” built to sell private data at a huge profit, offering a public service as a private enterprise, but most of all sharing the accumulated data of its billions of users with the U.S. national security state.

In the U.S., at least the odd expert on monopoly power identified this neo-Orwellian push as accelerating “the collapse of journalism and democracy.”

Facebook “fact-checking professional journalists” does not even qualify as pathetic. Otherwise Facebook – and not analysts like McGovern – would have debunked Russiagate. It would not routinely cancel Palestinian journalists and analysts. It would not disable the account of University of Tehran professor Mohammad Marandi – who was actually born in the U.S.

I received quite a few messages stating that being canceled by Facebook – and now by Twitter – is a badge of honor. Well, everything is impermanent (Buddhism) and everything flows (Daoism). So being deleted – twice – by an algorithm qualifies at best as a cosmic joke.