Julian Assange, the publisher of WikiLeaks, has been denied his petition to appeal the High Court’s decision to extradite him to the United States, where he faces up to 175 years in prison for publishing U.S. state secrets that revealed evidence of American war crimes.

Assange has four weeks to make submissions to home secretary to persuade her not to send him to the U.S. Another possible step for Assange to forestall extradition is to ask the High Court to hear a cross appeal against the lower court’s judgement. Assange’s attorneys on Monday indicated that that would likely be their next step. They issued the following statement: 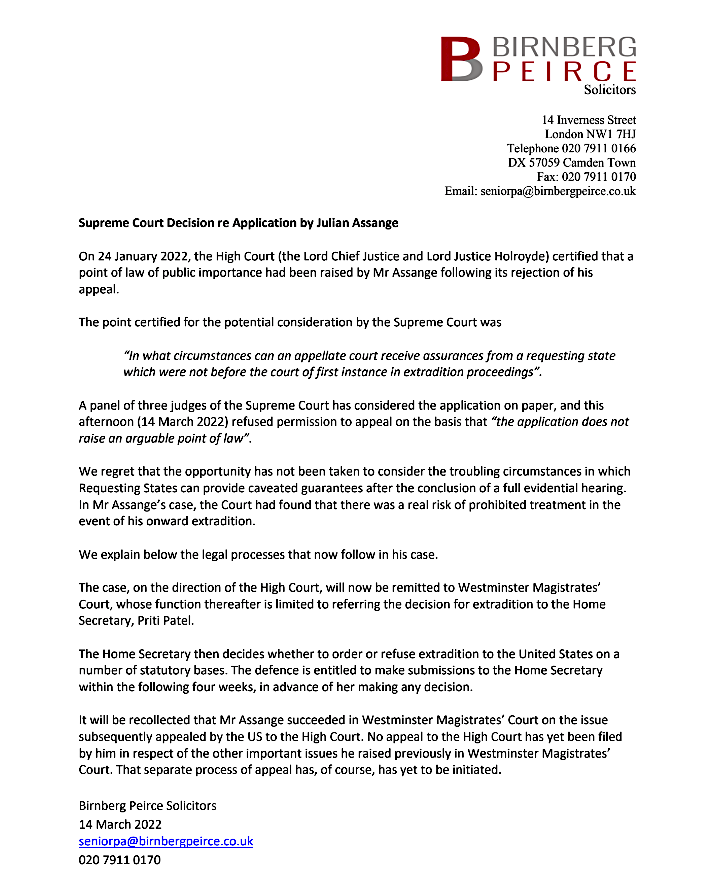 Background to the Case

Assange won in the magistrate’s court in January 2021. That court decided not to extradite Assange based on his mental state and the high probability he would commit suicide if he were sent to harsh prison conditions in the United States.

The U.S. appealed that decision to the High Court last December and won. It was on that decision the Supreme Court on Monday denied Assange’s petition (pdf) to appeal.  Though the magistrate’s court ruled that he should not be extradited on health grounds, the judge agreed with the United States on every point of law in her 132-page ruling.

The judge, Vanessa Baraitser, rejected all of Assange’s legal arguments and agreed that his publishing activities violated the law.  As Australian pundit Caitlin Johnstone put it at the time:

“Baraitser’s frightening ruling supported virtually every U.S.  prosecutorial argument that was made during the extradition trial, no matter how absurd and Orwellian. This includes quoting from a long-discredited CNN report alleging without evidence that Assange made the embassy a ‘command post’ for election interference, saying the right to free speech does not give anyone ‘unfettered discretion’ to disclose any document they wish, dismissing arguments from the defense that U.K. law prohibits extradition for political offenses, parroting the false claim that Assange’s attempt to help protect his source Chelsea Manning while she was exfiltrating documents she already had access to was not normal journalistic behavior, saying U.S.  intelligence might have had legitimate reasons to spy on Assange in the Ecuadorian embassy, and claiming Assange’s rights would be protected by the U.S.  legal system if he were extradited.”

However, Assange’s legal team appears set to now launch a cross appeal in which they will challenge the following points, as laid out here by British legal commentator Joshua Rozenberg QC:

When Must Assurances Be Given? 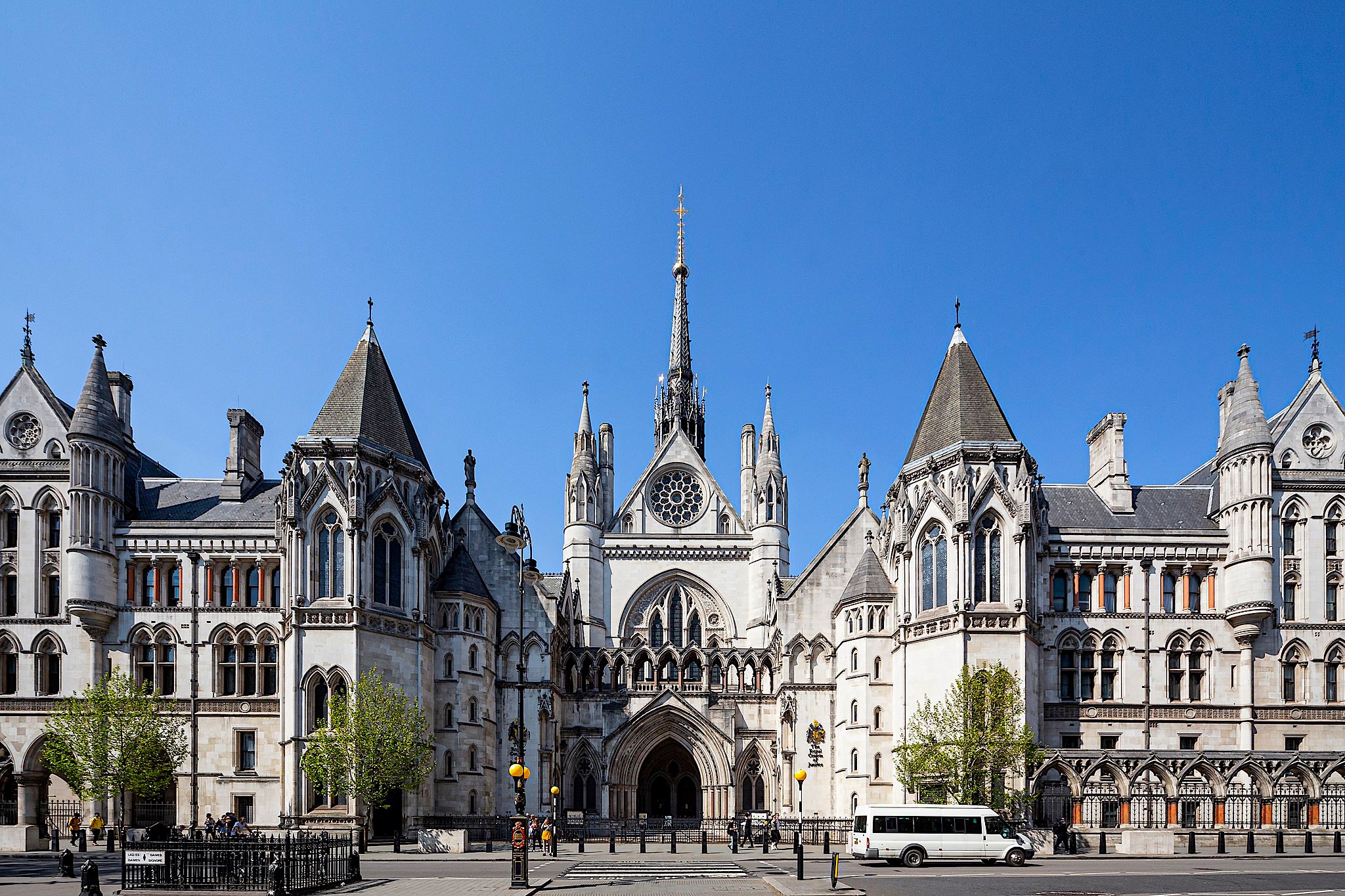 The High Court at the Royal Courts of Justice. (David Castor/Wikimedia Commons)

The High Court on Jan. 24 had left it up to the Supreme Court to determine whether it would grant permission to consider appeal on one legal issue, namely that assurances the United States gave to the magistrate’s court should have been made during the lower court’s hearing in September 2020 and not afterward. After Assange’s extradition had been barred on heath grounds, the U.S. gave Britain diplomatic assurances that it would not put Assange under the harshest incarceration regime, namely Special Administrative Measures (SAMS), and that he would receive adequate physical and mental health care.

Assange’s lawyers argued to the High Court in December that the U.S. was trying to re-litigate Baraitser’s decision because it was only after the U.S. lost the case that it came up with these assurances.

The High Court on Jan. 24 left it up to the Supreme Court to decide on whether to hear Assange’s appeal on “a single point of law … in what circumstances can an appellate court receive assurances from a requesting state which were not before the court of first instance in extradition proceedings.”

This appeared at the time encouraging for Assange because the Supreme Court was not being asked to judge the credibility of the U.S. diplomatic assurances — which it almost certainly would not do — but simply on the matter of when in the legal process those assurances should have been given.

US Won on Assurances Alone

The High Court had ruled in December that Assange’s extradition could go ahead, vacating Baraitser’s decision. The High Court did not disagree with the substance of that ruling. However it accepted the U.S. “assurances.” On the basis of those assurances alone the High Court overturned Baraitser’s ruling, clearing the way for extradition.

Siding with the United States, which argued that the assurances could come at any point in the legal process, he read:

“For the reasons given in the judgment which is today handed down, the court allowed the appeal on the grounds that .. a. the DJ [District Judge], having decided that the threshold for discharge under section 91 of the Extradition Act 2003 was met, ought to have notified the USA of her provisional view, to afford it the opportunity to offer assurances to the court; and b. the USA has now provided the United Kingdom with a package of assurances which respond to the DJ’s specific findings.”

“In our view, a court hearing an extradition case, whether at first instance or on appeal, has the power to receive and consider assurances whenever they are offered by a requesting state,” the High Court judgment said.

“An offer of assurances in an extradition case is a solemn matter, requiring careful consideration by the requesting state of its willingness to give specific undertakings to another state. It would not be appropriate to require that to be done on a contingent or hypothetical basis; and we doubt the practicability of such an approach. We do not accept that the USA refrained for tactical reasons from offering assurances at an earlier stage, or acted in bad faith in choosing only to offer them at the appeal stage.”

The High Court also tried to justify why the U.S. waited until after the extradition hearing in September 2020 to make its assurances. “We observe that the decision that all closing submissions should be made in writing, in a case in which the arguments had ranged far and wide over many days of hearing, may well have contributed to the difficulty faced by the USA in offering suitable assurances any earlier than it did,” the court said.

Had the defense known about the assurances during the extradition hearing in district court it could have argued with evidence from previous cases about their unreliability. But they were never given that chance.