Putin: Kiev ‘Puppets’ of US
Difficult to Verify Size of Kiev Forces on Front Line 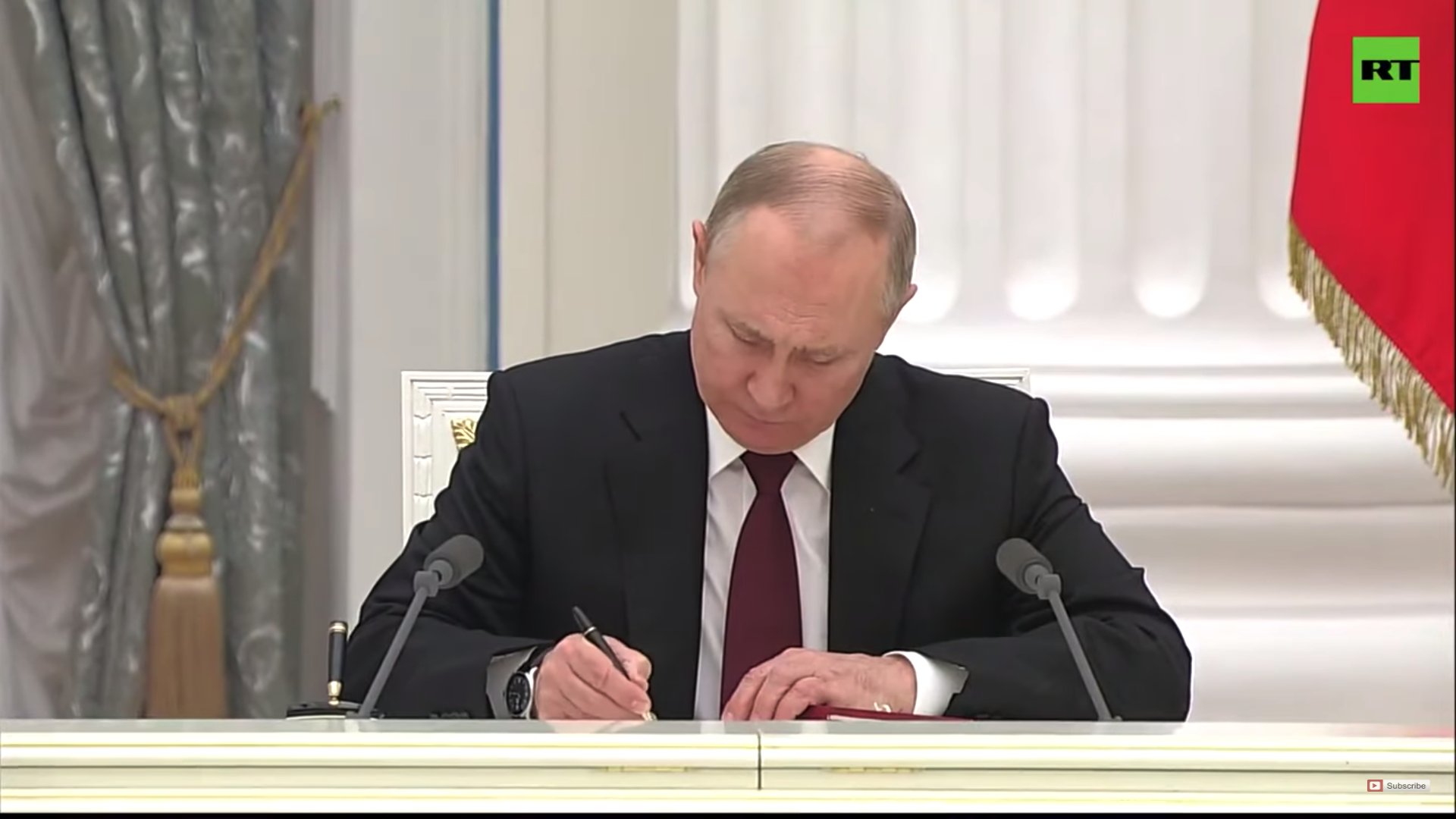 Russian President Vladimir Putin has recognized the independence from Ukraine of two breakaway provinces in Donbass as violence in the region continues to escalate.

In Monday evening televised remarks after signing decrees recognizing the independence of Lugansk and Donetsk, Putin denounced the government of Ukraine as “puppets” of the United States. He said:

“As for those who captured and are holding on to power in Kiev, we demand that they immediately cease military action. If not, the complete responsibility for the possibility of a continuation of bloodshed will be fully and wholly on the conscience of the regime ruling the territory of Ukraine.”

After Putin had spoken by phone earlier on Monday with French President Emmanuel Macron and German Chancellor Olaf Scholz on Monday, the Kremlin issued this statement:

“The president of Russia said that he intended to sign the relevant decree in the near future. The president of France and the Federal Chancellor of Germany expressed their disappointment with this development. At the same time, they indicated their readiness to continue contacts.”

The Duma last week passed a resolution recommending that Putin recognize the provinces’ independence from Ukraine.

Putin had resisted for eight years recognizing the independence of the self-declared republics of Lugansk and Donetsk in the Donbass, insisting instead that Kiev implement the 2014-15 Minsk agreements that would have given autonomy to the provinces, while they remained within Ukrainian territory.

The decision by Putin effectively declares that the Minsk process is over.

It does not mean at this point, however, that the people of Lugansk and Donetsk are ready to hold a referendum to join Russia or that Moscow is interested in making them part of Russia, as happened in Crimea in 2014.

The two provinces declared independence after the 2014 U.S.-backed coup in Kiev that overthrew democratically-elected President Viktor Yanukovych, who fled the violent capital to the Donbass, his base of support, exactly eight years ago today, on Feb. 21, 2014. On the next day Parliament, with only opposition leaders present, impeached him.

After anti-Russian language laws were passed by the coup government, hand-picked before the coup by the United States, and after neo-Nazis burned dozens of people alive in a building in Odessa on May 3, 2014, both Lugansk and Donetsk declared independence nine days later on May 12.

The coup government launched a civil war against the separatists, whom they called “terrorists.” In essence the Donbass was defending their democratic rights to vote, as a majority of the region voted for Yanukovych, in an election certified by the Organization for Security and Cooperation in Europe (OSCE). In the eight years since, as many as 14,000 people have been killed in the fighting. 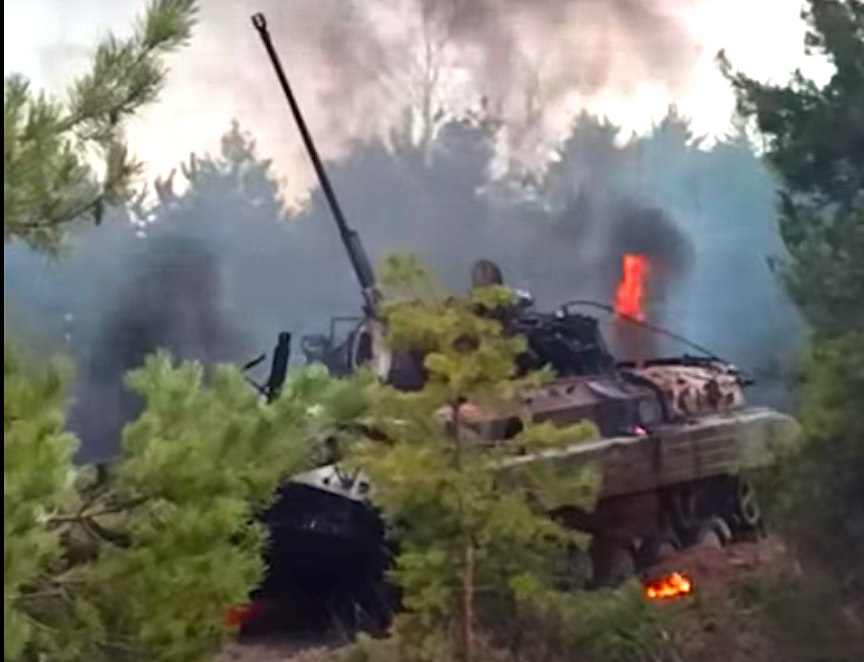 FSB video of what it says is Ukrainian tank after being hit on Russian territory Monday. (RT Spanish screenshot)

The violence from that continuing conflict has soared since Thursday with thousands of ceasefire violations and explosions in and around Lugansk and Donetsk reported by OSCE monitors on the ground.

Russia said on Monday that it captured one Ukrainian soldier and killed five others after they crossed into Russian territory in Rostov, just over the border with Ukraine. The Russian government has not yet produced photographic evidence of the bodies or the prisoner. If they are indeed Ukraine soldiers it can not be spun by the West as a false flag attack, as the U.S. has said Russians would be killed on Russian territory as well as inside Donetsk and Lugansk.

Kiev dismissed as “fake” the report of five of its soldiers having been killed. “I reiterate that the Ukrainian armed forces have not attacked Donetsk and Lugansk, have not sent saboteurs or APCs across the border, have not shelled Russia’s territory or its border checkpoint. All of these are the products of Russia’s fake factory,” Ukrainian military spokesman Pavlo Kovalchuk told reporters.

Kovalchuk also claimed explosions inside Donetsk and Lugansk were being staged. He said:“The occupiers themselves are blowing up infrastructure facilities in the occupied territories, carrying out erratic shelling of settlements and staging other provocations to escalate the situation.”

Any civilians genuinely killed in those areas will very likely also be portrayed as victims of false flags by the West. A border post destroyed within Russian territory on Monday was dismissed by Kiev as “information war waged to pin the blame on Ukrainian armed forces.”

Both sides are blaming the other for the renewed shelling, with Donetsk and Lugansk both saying Kiev has begun an offensive to take back the territory. On Friday the leaders of the Donetsk and Lugansk called on civilians to flee to Russia, which has begun to accommodate thousands of refugees. Western commentators said the evacuation was a ploy to make it look like an government offensive was underway, and that it was clearing the way for Russia to invade.

Biden said Friday that it was a fiction that Ukraine is planning an offensive.

He acknowledged there’s been a “major uptick” in ceasefire violations. But he blamed them all on “Russian-backed fighters attempting to provoke Ukraine in the Donbass.” Biden said there’s “more and more disinformation being pushed out to the Russian public, including Russian-backed separatists, claiming that Ukraine is planning to launch a massive offensive attack in the Donbass.”

“Well look,” Biden went on, “There is simply no evidence of these assertions and it defies basic logic to believe the Ukrainians would chose this moment, with well over 150,000 troops arrayed on its borders, to escalate a year-long (sic) conflict.” Biden said this was “consistent with the Russian playbook that has been used before, to set up a false justification to act against Ukraine.”

The OSCE has monitors on the ground at the line of separation between Ukrainian forces and militias of the Donetsk and Lugansk. The OSCE provides daily reports on ceasefire violations and the number of explosions and usually indicates which side the fire came from.

It also publishes maps to indicate where most of the shells are landing. 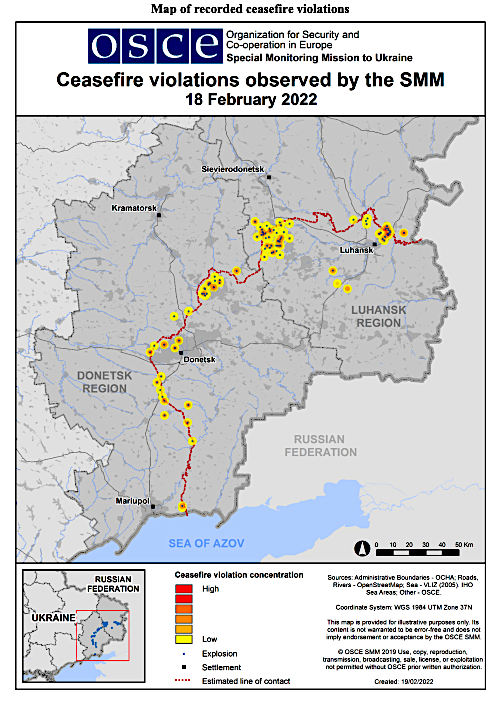 This map published by the OSCE showing where the explosions have landed clearly indicates that the vast majority of shells have fallen within separatist territory, meaning they originated from the government side.

Nevertheless, U.S. Secretary of State Antony Blinken said these attacks are “false flags” hatched by the Russians to justify an invasion.

Both The Washington Post and The New York Times are both blaming the majority of the shelling on the militias. For instance, in this report on Saturday, the Post only reported the Ukrainian military’s side of the story:

“The shelling in the government-controlled side of the Donbas region has increased “tenfold” since Thursday, the Ukrainian Armed Forces said in a statement. On Saturday, two soldiers were killed, five were injured and there were 70 total cease-fire violations by the Russian-backed separatists, the military said in a Facebook statement.”

Outside the city of Novoluhanske, along the demarcation line with the self-proclaimed Donetsk separatist territory, Col. Oleksandr Zinevich showed journalists where separatist forces have been pounding an abandoned industrial area with artillery in recent days.

This area has not been a hot spot in years, but Zinevich said he sees the eruption of attacks over the past three days — including artillery, mortars and grenades — as evidence of a coordinated campaign being launched by Russia.

Moscow is trying to provoke Ukrainian forces into responding and giving Russia an excuse to launch an attack, he said. He has told his troops not to respond unless their lives are in danger.”

What is curiously lacking in Western media reports of events in Donbass is any mention of the size of Ukraine government forces along the line of confrontation. U.S. and European newspapers and television repeatedly show detailed maps of Russian forces near the Ukrainian border but never show any Ukrainian military positions. It’s like setting up a chess board with only black pieces.

Understanding the size of the government deployment is key in helping to determine if an offensive has begun. Not mentioning it at all suspiciously appears as if an offensive is being covered up.

Last Thursday, Russian Deputy Foreign Minister Sergey Vershinin told the U.N. Security Council that 122,000 Ukrainian military forces were lined up at the front with Donbass with the possible intention of launching an offensive.  It is a number difficult to verify. (There also unknown numbers of neo-Nazi groups, such as Azov Battalion and Right Sektor reportedly at the border.)

An OSCE spokesman told Consortium News that though the organization has about 1,300 monitors directly on the ground, it did not have figures on the size of the Ukrainian government force on the line of separation although it is within its mandate to report on it.

The authorities in Donetsk and Lugansk have published this map of what it says are Ukrainian government positions.  Below that is a publicly available chart showing Ukraine’s ground forces in its Operational Command East. (Both can be enlarged by clicking on them.) 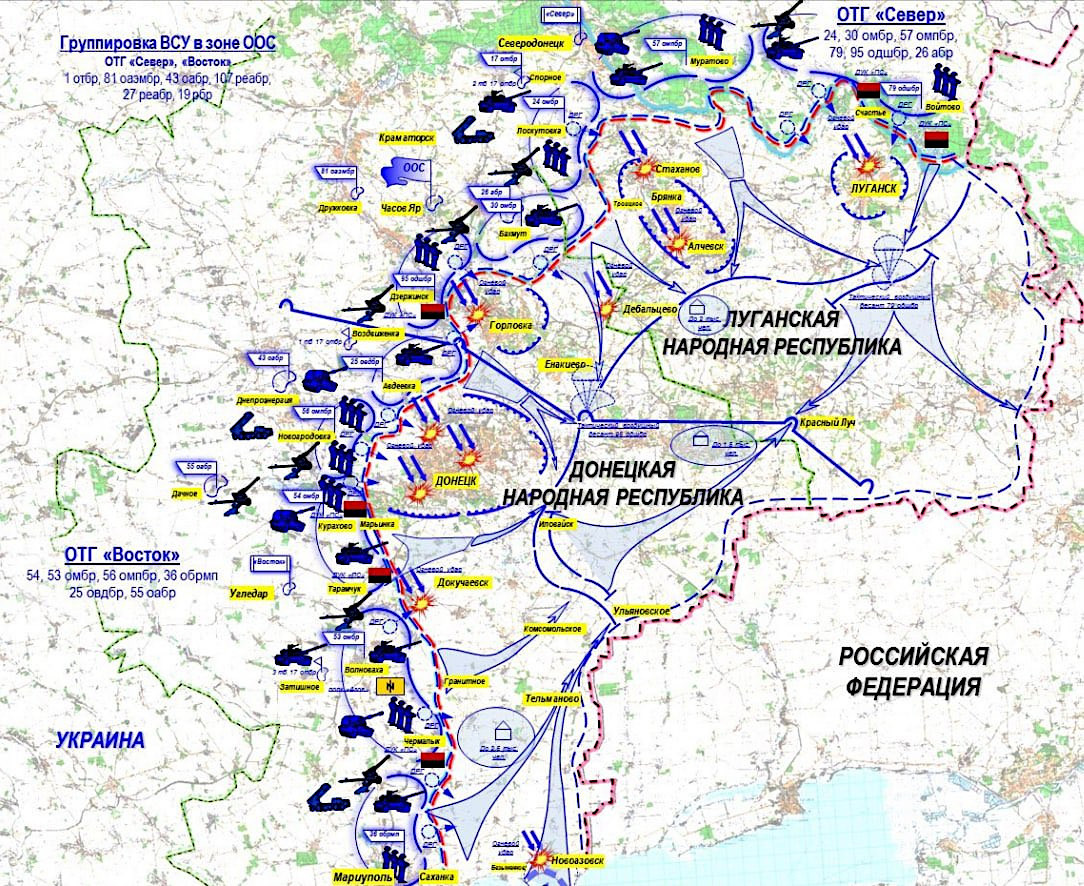 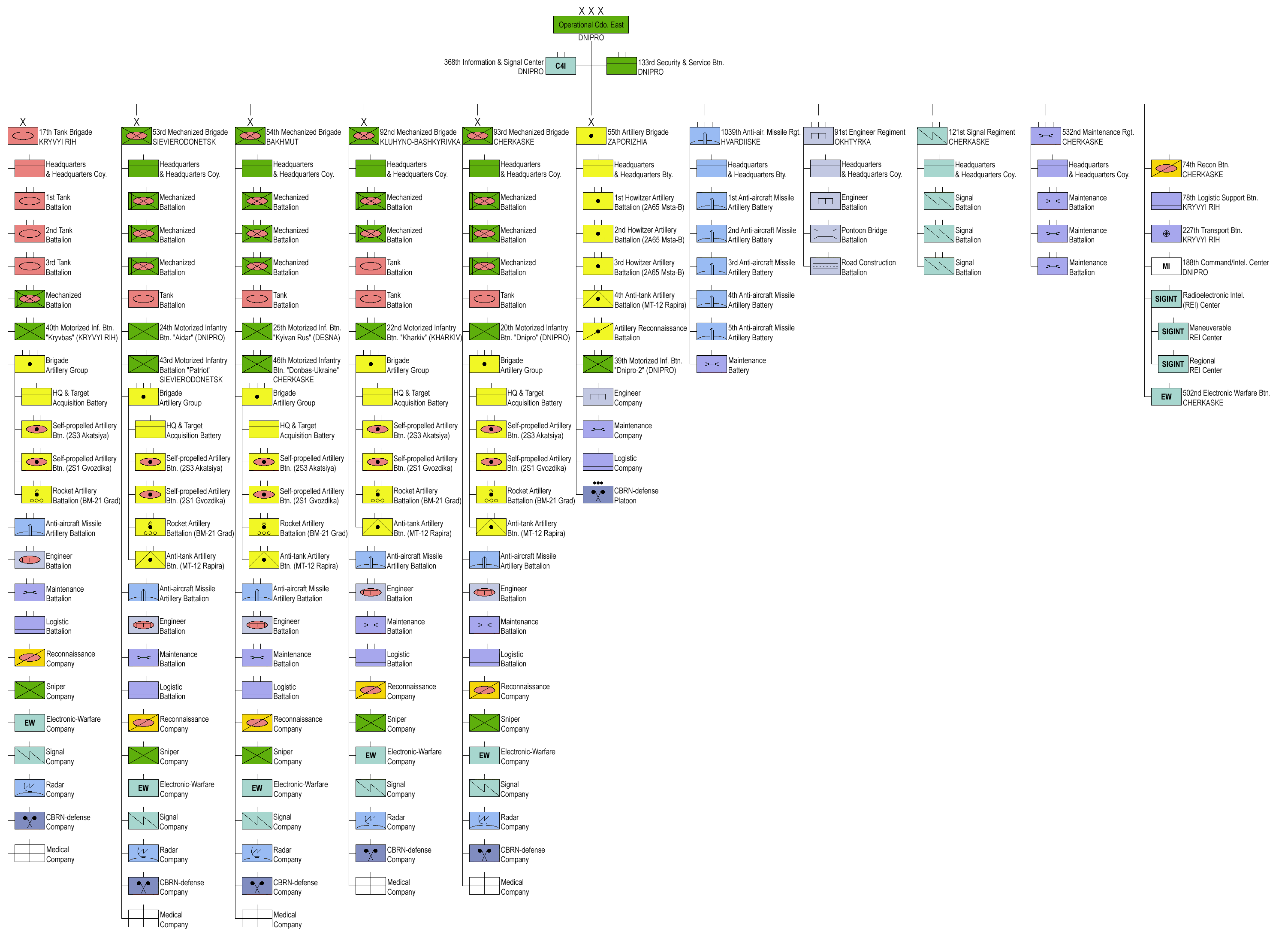 ← PATRICK LAWRENCE: ‘Primacy or World Order’
The Stunted Role of the OSCE →