Ukraine’s National Guard says that last year the U.K. military agreed to start training its forces, which include a thousand-strong neo-Nazi unit, Matt Kennard reports. The U.K. Ministry of Defence disputes the claim. 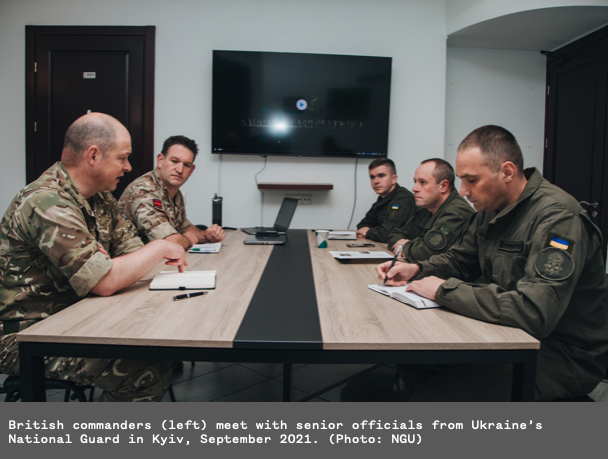 Details and photos of the meeting in the capital, Kiev, were posted in Ukrainian on the website of Ukraine’s National Guard (NGU) last year.

Declassified understands the U.K. Ministry of Defence (MoD) believed the September 2021 meeting to be private and should not have been publicized. There is no mention of the meeting in any U.K. records that are publicly available.

Three British commanders of Operation Orbital — the U.K. military’s training mission in Ukraine — are pictured, alongside three NGU officers. They sit around a table taking notes.

The MoD refused to give Declassified the names of the U.K. personnel who attended the meeting, citing operational and personnel security issues.

However, the NGU report names Lt Col Andy Cox, deputy commander of Orbital, while two other British officers are pictured, one with his name tag prominently displayed.

Orbital, which was launched in 2015, has so far only trained Ukraine’s regular armed forces. Expanding it to include the National Guard would be controversial due to sensitivities around the far-right sympathies of some of its units.

The NGU was formed in 2014 to incorporate an array of paramilitary and volunteer battalions which were fighting pro-Russian separatists in eastern Ukraine. This included a neo-Nazi unit, the Azov Battalion, which reportedly has a thousand soldiers.

Now an official regiment within the NGU — and therefore part of Ukraine’s Ministry of Internal Affairs – Azov fighters have been pictured in eastern Ukraine with Nazi insignia such as swastikas and SS runes on their helmets.

The battalion’s founder has said that Ukraine should “lead the white races of the world in a final crusade…against Semite-led Untermenschen[subhumans].”

The NGU report quotes Lt Col Cox as promising “the British military is ready to involve representatives of the National Guard of Ukraine in the training activities being conducted today for units of the Armed Forces of Ukraine to develop their combat capabilities.”

Cox adds: “We are currently considering training with the National Guard of Ukraine on defence operations and the work of staff officers.”

He continued: “We will start this work with the inclusion of NGU representatives in the training activities that are already being conducted by British instructors in some units of the Armed Forces of Ukraine.” 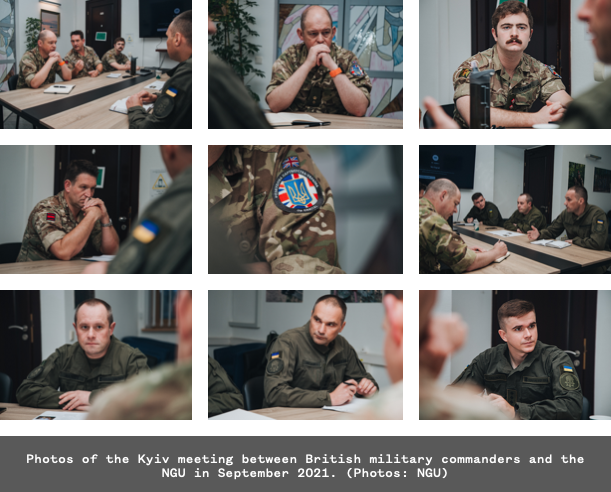 But the MoD told Declassified it has no plans to start training the NGU and that Cox was misquoted, probably due to a translation error.

“The U.K. does not conduct training with the National Guard of Ukraine. This meeting was a routine engagement between personnel deployed on Operation Orbital and a government organisation in Ukraine to improve mutual understanding.”

The September meeting, however, appears to be a significant engagement between the British military and the NGU.

The report notes that British commanders were “acquainted with the history of creation, tasks and structure of the National Guard of Ukraine,” “the peculiarities of the combat operations of NGU units” as well as its “role and place in the security and defence sector of the state.”

Other NATO militaries are cooperating with the NGU. Close to 2,000 NGU fighters have been trained by the Canadian military as part of its Operation Unifier mission which began in 2015.

But it has proven controversial. In June 2018, Canadian military officers were briefed by leaders from the Azov Regiment and were photographed with its officials despite warnings about the unit’s Nazi ideology.

Azov then posted the photos on social media, adding that the Canadian delegation had expressed “hopes for further fruitful cooperation.” Internal Canadian documents, later released, show the government feared the meeting being exposed in the media.

In the September 2021 meeting, Colonel Serhiy Maltsev, head of international cooperation for the NGU, told the British commanders: “The contribution made by the Canadian military to building the capacity of the Guards is difficult to overestimate.”

He added: “Our joint achievements with our Canadian counterparts can serve as an example for the future cooperation of the NGU with [the U.K.’s] Operation Orbital.” 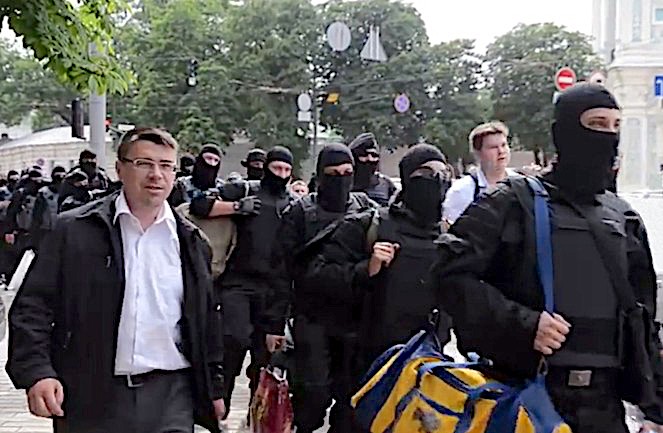 Oleh Odnoroshenko, at left, PR officer of the special police regiment Azov, with volunteers on the street in Kiev, 2014.  (News24, CC BY 3.0, Wikimedia Commons)

Four months before the meeting with British commanders, the same NGU website posted a statement to mark the Azov Regiment’s seven-year anniversary. Titled “Seven years of victory,” it gushed with extravagant praise for the neo-Nazi unit.

“In early May 2014, the ‘black men’ arrived in Berdyansk,” it noted, referring to the port city on the northern coast of the Sea of Azov. “These were true patriots of Ukraine, who gathered here from all over the country and rallied to repel the occupiers who encroached on Ukrainian sovereignty.”

“The newly formed volunteer unit was formed by caring men,” it continued, adding “The Azovs survived, hardened in fierce battles.” It concluded: “Today, Azov is one of the most capable units of the Ukrainian army, whose fighters have professional skills at the highest level, have the latest weapons and equipment and the same thirst for victory as seven years ago.”

But it is not only Ukraine’s NGU which is linked to far-right extremism.

In 2015, Dmytro Yarosh, then leader of the far-right Right Sector party, was appointed a military adviser to Colonel General Viktor Muzhenko, then Ukraine’s chief of general staff. 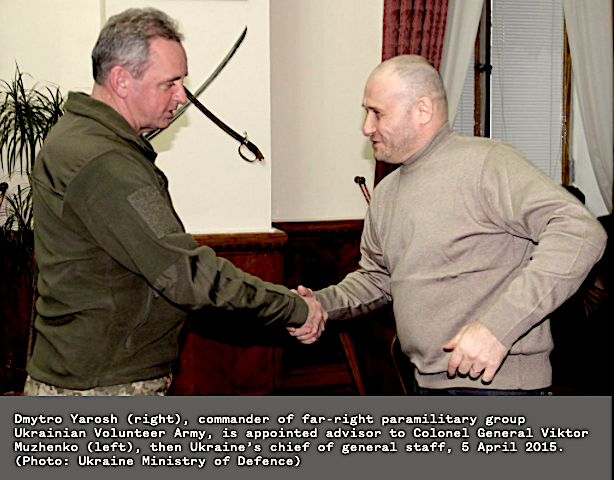 But in 2017, the Kiev Post reported that “around 130 former Right Sector fighters are now contracted soldiers in the Ukrainian army proper.”

In November, Yarosh reported that he had been appointed an adviser to Valery Zaluzhny, commander-in-chief of Ukraine’s armed forces.

Yarosh calls himself himself a follower of Stepan Bandera, a militant Ukrainian nationalist and Nazi collaborator during World War II. 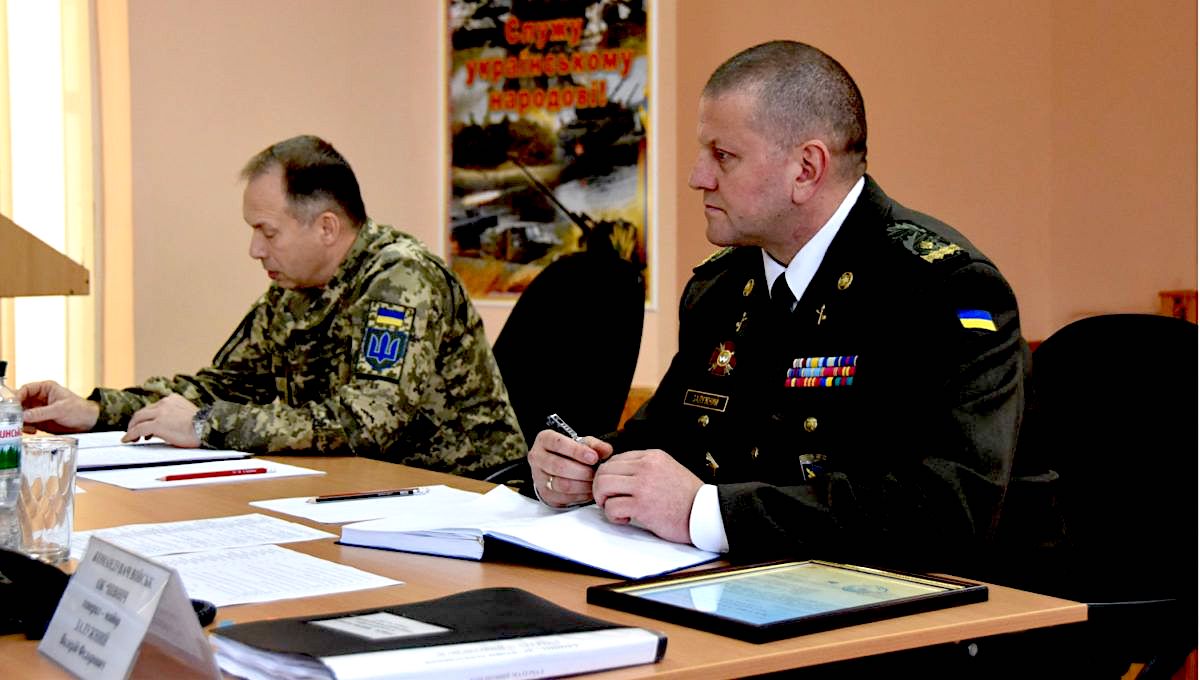 When the Nazis invaded the U.S.S.R. in June 1941, Bandera’s followers murdered 4,000 Jews in Lviv, a city in western Ukraine, in a few days, using weapons ranging from guns to metal poles.

It is estimated that up to 1.6m Ukrainian Jews were killed in the Holocaust.

A report last year from the Institute for European, Russian and Eurasian Studies at George Washington University found another far-right group, Centuria, boasting that its members currently served as officers in Ukraine’s military.

It said they “have succeeded in establishing cooperation with foreign colleagues from such countries as France, the United Kingdom, Canada, the USA, German and Poland.”

The report found one apparent member of Centuria had received 11 months of officer training at Britain’s elite military training facility Sandhurst, graduating in 2020.

Britain’s Operation Orbital has so far trained 22,000 members of Ukraine’s armed forces. In 2020, that training was expanded “to incorporate broader operational and capability orientated maritime and air capacity building.”

Matt Kennard is chief investigator at Declassified U.K.. He was a fellow and then director at the Centre for Investigative Journalism in London. Follow him on Twitter @kennardmatt

This article is from Declassified U.K.