Putin told his annual press conference today that the U.S. had “tricked” Russia over NATO expansion and that it had to end, reports Len Bracken. 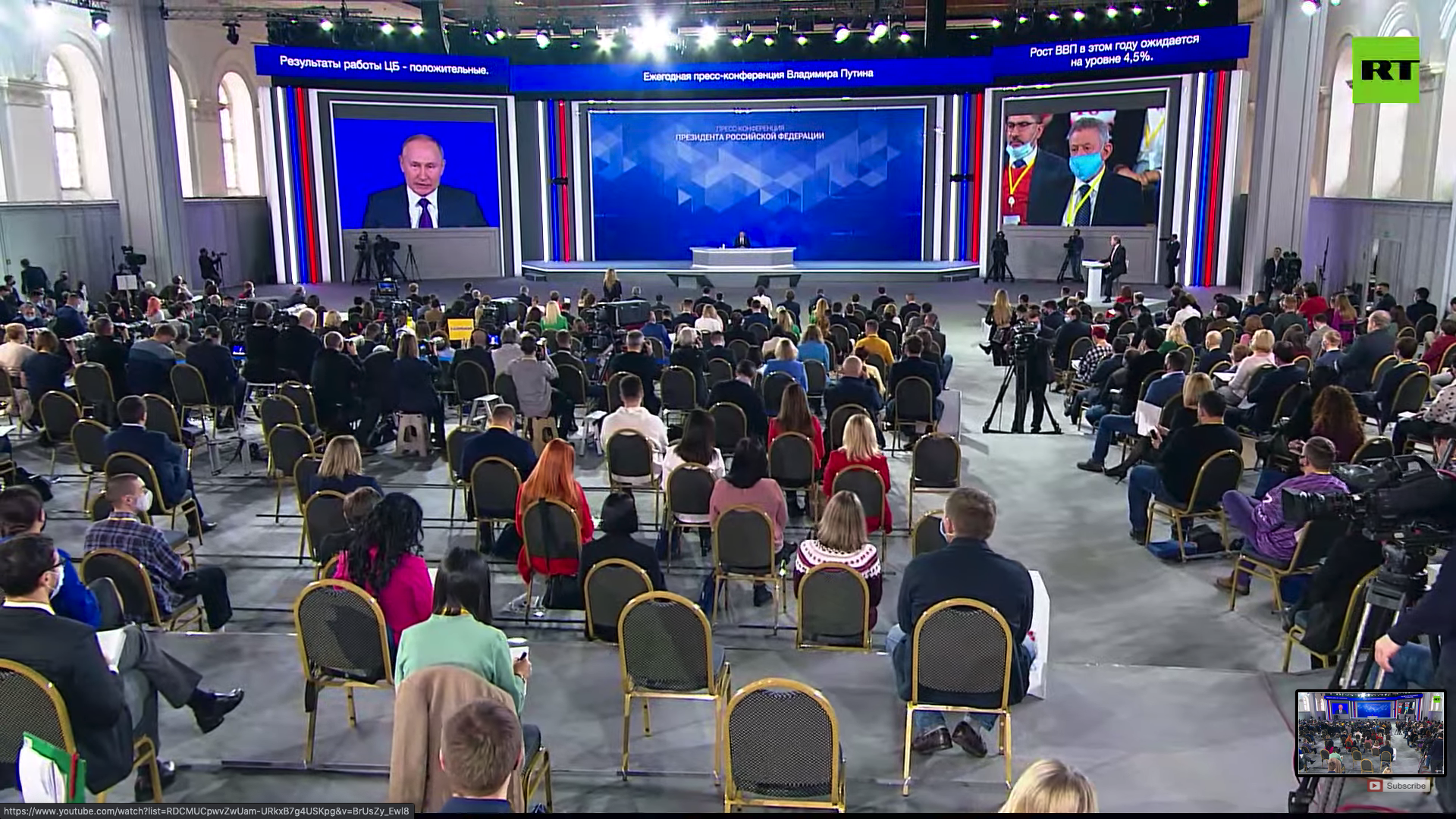 Putin at his annual press conference in Moscow on Thursday. (Screenshot/RT/YouTube)

Russian President Vladimir Putin today told his annual year-end press conference that peace is up to the U.S. after Washington agreed this week to negotiate in January with Moscow on Russian demands to resolve tension over Ukraine.

“Our actions will depend not on the course of negotiations, but on the unconditional guarantees of Russian national security,” Putin said. “We made it clear that NATO’s expansion to the east is unacceptable. The U.S. is on our doorstep with its missiles. How would Americans react if we placed our missiles at the U.S. border with Canada or Mexico?”

Before agreeing to the talks, the U.S. had sent mixed messages about the two formal Russian proposals, characterizing them as either an opening for negotiations or a pretext for war.

The proposals — a draft treaty with the United States and a draft agreement with the North Atlantic Treaty Organization (NATO) — were published by the Russian Foreign Ministry on Dec. 17. The texts reflect Russia’s concern with the eastward expansion of NATO, including the ongoing armament of Ukraine and its proposed eventual inclusion in the Western military alliance.

The Russian proposals were exchanged at a Dec. 15 meeting in Moscow between Russian Deputy Foreign Minister Sergei Ryabkov and Karen Donfried, U.S. assistant secretary of state for European and Eurasian affairs. They contain the following demands:

While a senior U.S. senator accused Russia of “clearly trying to create a pretext for war,” the proposals were also viewed in Washington as an opening gambit that could find middle ground.

But the White House said it was ready for talks. National Security Adviser Jake Sullivan said the U.S. is “fundamentally prepared for dialogue” with Moscow. “Russia has now put on the table its concerns with American and NATO activities,” he said at the Council on Foreign Relations the day the demands were made. “We’re going to put on the table our concerns with Russian activities that we believe harm our interests and values.”

NATO initially dismissed the Russian move, saying in a Dec. 16 statement that it “supports the right of all countries to decide their own future and foreign policy free from outside interference.” While keeping the door open to working with Russia on “confidence-building measures” in the context of the Organization for Security and Co-operation in Europe (OSCE), the organization said, “NATO’s relationship with Ukraine is a matter only for Ukraine and the 30 NATO Allies.”

In his press conference today, Putin pointed out that the U.S. reneged on a commitment made in 1990 by the George H.W. Bush administration not to expand NATO, a vow supported by documents released in 2017 by the National Security Archive at George Washington University.

“It is not the course of the negotiations that is important, the result is important,” Putin said today. “’Not a single inch to the East’, they told us in the nineties. So what? They tricked us. There have been five waves of NATO expansion. Missile systems are appearing in Romania and Poland. Did we come to them? They came to us.”

“The Soviet Union did everything to build normal relations with the United States and the West, specialists from American services were present at our military weapons facilities, went there every day. US advisers and CIA personnel worked with the Russian government. What else did they want? Why did they support terrorist organizations in the Caucasus? What for? It was an attempt aimed at the further collapse [of Russia].” 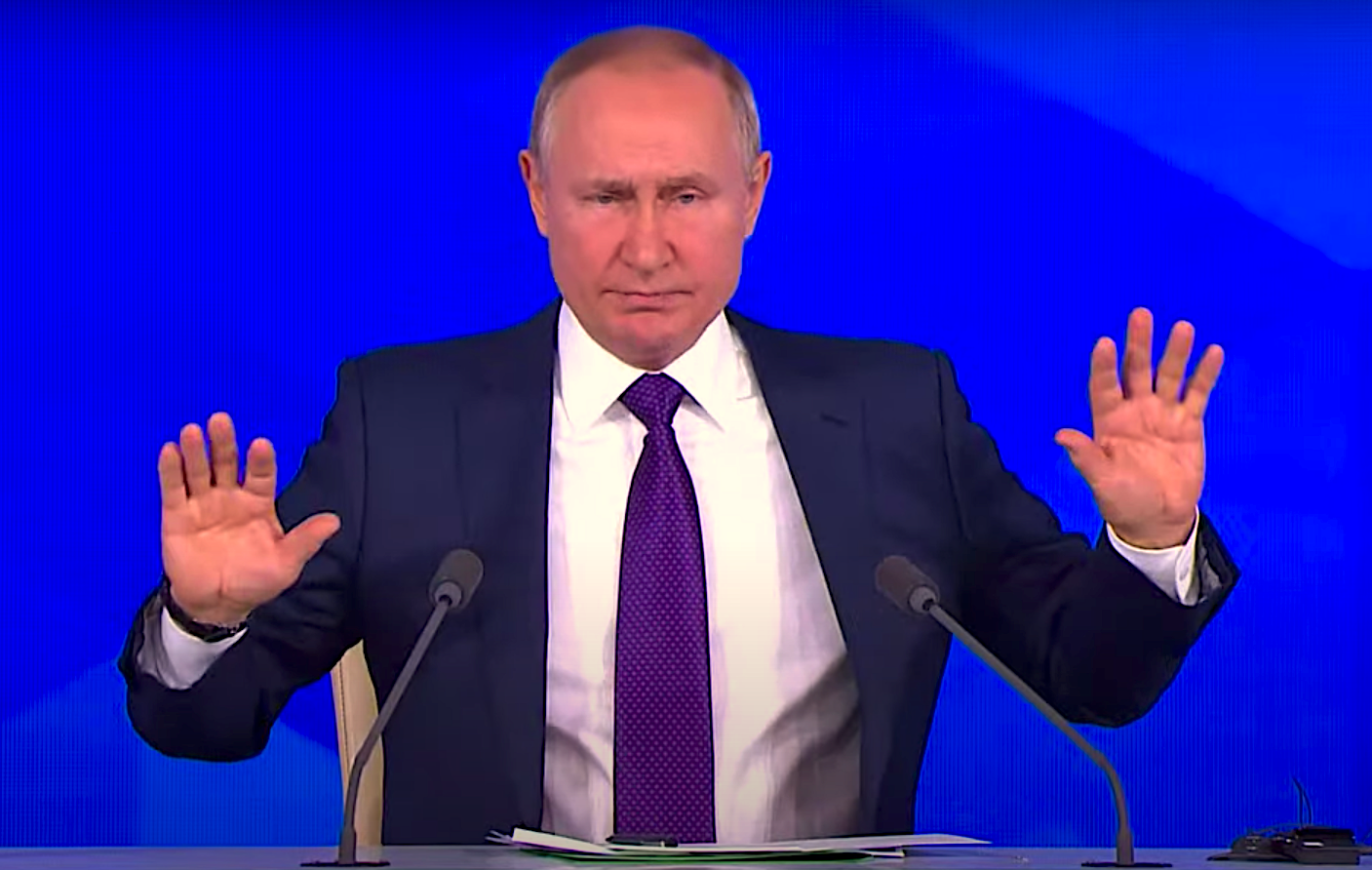 Putin at his press conference on Thursday. (Screenshot/YouTube/RT)

Serious tensions over Ukraine began after a U.S.-backed coup overthrew democratically-elected President Viktor Yanukovych in 2014. As a response, Crimea voted overwhelmingly to join Russia without a shot fired and the eastern provinces in Donbass were attacked by the Ukrainian military and neo-Nazi brigades for resisting the coup.

In his Moscow news conference, Putin said the reunification of Crimea with Russia was not on the agenda before the 2014 coup d’etat.

“The aggravation began in 2014. What happened then? A coup. A bloody one. People were killed and burned”, Putin said. “President Yanukovych agreed with everything, received guarantees from other countries of a peaceful resolution of the situation. How could we refuse Sevastopol and Crimea to take them under our protection?”

In 2014 the U.S. claimed with scant evidence that Russia had invaded eastern Ukraine after the coup. Moscow had sent equipment and provided intelligence and logistical support. Washington and its NATO allies claim that Russia is poised again to invade, though there’s little word on when they withdrew from the first invasion.

Ukraine vows to recapture Crimea amid fears of a Kiev spring offensive. Russia says troop deployments near the Ukraine border are in self-defense. Putin told the press conference his “impression” was an offensive was being prepared. Russia was being warned “not to interfere,” he said, but “we must react.”

Seen in the light of the 1962 Cuban Missile Crisis, in which both the U.S. and the U.S.S.R. conceded they each had legitimate security concerns with the U.S. removing missiles from Italy and Turkey and the Soviet Union withdrawing its missiles from Cuba, NATO might want to consider negotiating limits to its military activity near Russia’s borders.

George Beebe, former chief of the Russia Analysis Group at the Central Intelligence Agencey, described the proposals as Russia’s “opening position” and as a possible basis for talks. In a comment to Radio Free Europe/Radio Liberty, Beebe, now with the Center for the National Interest in Washington, said he could foresee a potential “middle ground” resulting from talks based on the proposals.

The Russian demands might also been seen in light of European dependence on Russia natural gas supplies, Moscow’s advances in hypersonic missile technology and its reported ability to deactivate enemy electronics with a new weapons system.

Russia could incapacitate NATO forces, according to Xavier Raufer, writing in the October edition of Atlantico, with its Murmansk-BN system that can cut off all satellite waves, cell phones, radios and GPS systems over a 3,000 square kilometer area. “Notably,” he wrote, “the American F35 high-tech fighter jets can be tied to the ground, deprived of their crucial satellite communications.” 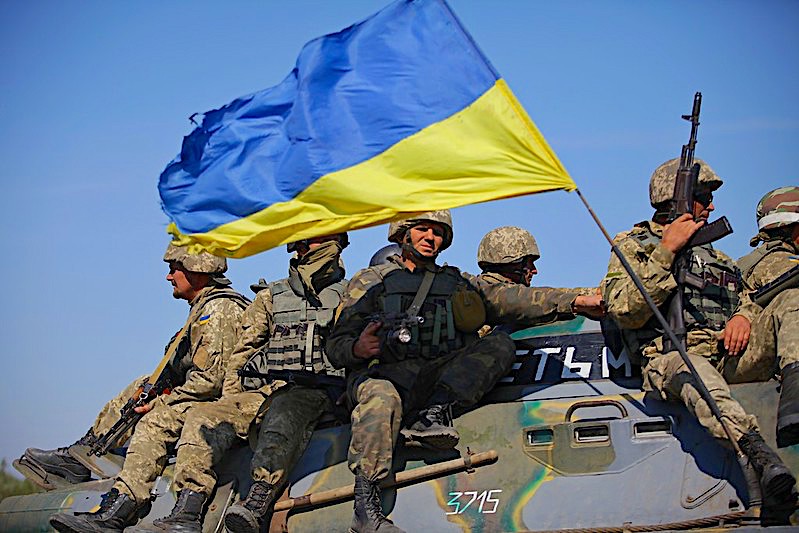 While in Moscow on Dec. 15, Donfried, the U.S. assistant secretary of state, reiterated Washington’s concern for Russian troop movements near the Ukrainian border. She also backed the Minsk agreements, signed in 2014 and 2015, concerning the war between Kiev and the breakaway Donetsk People’s Republic and Luhansk People’s Republic in the Donbas region, which Russia says Kiev is violating.

Donfried supported the Normandy Format in which Germany and France have been leading negotiations between the separatists and Ukraine to implement the Minsk agreements: the first being a ceasefire pact and the second involving a political settlement for the separatist republics. Russia considers itself a moderator and not a part of the Normandy Format. Moscow accuses Kiev of not adhering to the Minsk Accords.

Washington, which is not party to the talks, updated the U.S.-Ukraine Charter on Strategic Partnership on Nov. 10.

The Trilateral Contact Group on Ukraine, involving the OSCE, Kyiv and Moscow, has been working toward a peaceful settlement in eastern Ukraine in the context of the Minsk agreements.

The Russian demands come amid renewed fighting between the Ukrainian government and Russian-speaking separatists republics in the Donbas region.

These clashes include the use in October by Kyiv of a Turkish-made attack drone that Moscow has said crossed a red line. NATO member Turkey is set to supply Ukraine with two dozen more attack drones, according to a Dec. 3 report in Bloomberg News.

Russian Foreign Minister Sergei Lavrov said this week that Kiev had also been supplied with Javelin anti-tank missiles by Washington.

Len Bracken is a former international trade reporter for a major news service and the author of numerous books.

7 comments for “Putin Says Ukraine Peace Up to US”