Narendra Modi’s surrender to the farmers is a win for Indian democracy and for peasants around the world, writes Vijay Prashad. 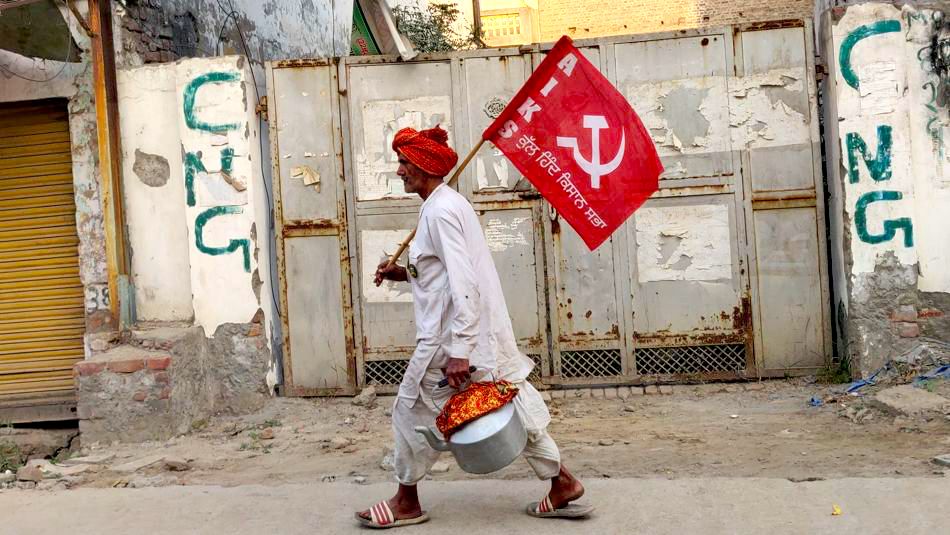 A farmer at the protest encampment at Delhi’s Singhu Border carries the flag of the All India Kisan Sabha, Nov. 21. (Subin Dennis, Tricontinental: Institute for Social Research)

On Nov. 19, a week before the first anniversary of the farmers’ revolt, India’s Prime Minister Narendra Modi surrendered. He accepted that the three laws on agricultural markets that had been pushed through the parliament in 2020 would be repealed. The farmers of India had won.

The All India Kisan Sabha (AIKS), one of the organizers of the protest movement, celebrated the triumph and declared that “this victory gives more confidence for future struggles.”

Many pressing struggles remain, including the fight for a law to guarantee a minimum support price that is one and a half times the cost of production for all crops of all farmers. The failure to address this, the AIKS notes, “aggravated the agrarian crisis and led to the suicide of over [400,000] farmers in the last 25 years.” A quarter of these deaths have taken place under Modi’s leadership over the past seven years. 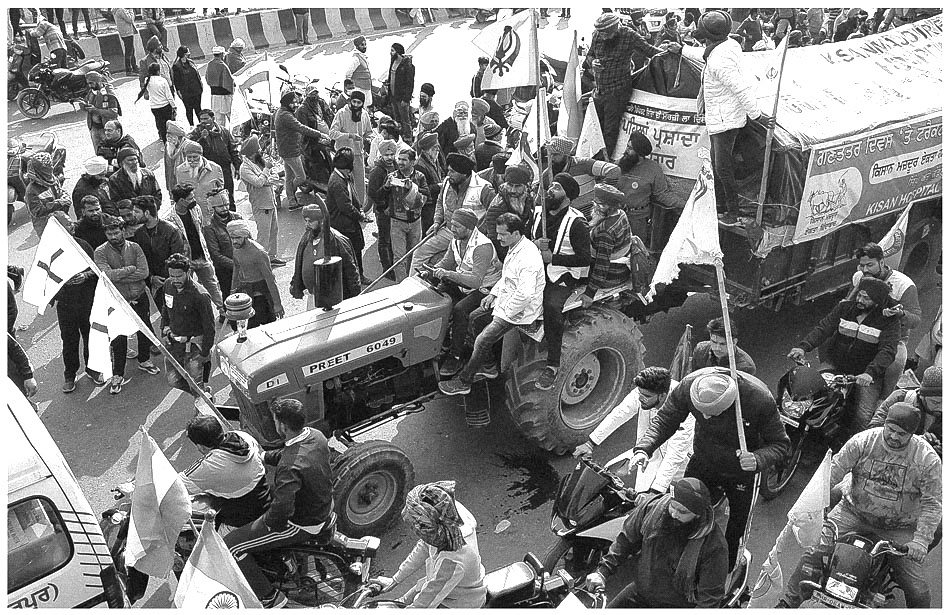 A tractor contingent on GT Karnal Road breaks through barricades and enters Delhi, beginning a confrontation between protesters and the police, Jan. 26. (Vikas Thakur, Tricontinental: Institute for Social Research)

At Tricontinental: Institute for Social Research, we have produced four substantial dossiers that reflect on the agrarian crisis in India: an explanation of the farmers’ revolt (“The Farmers’ Revolt in India,” June 2021); an analysis of the central role of women in both agricultural work and struggles (“Indian Women on an Arduous Road to Equality,” October 2021); a portrait of the impact of neoliberalism on rural communities (“The Neoliberal Attack on Rural India: Two Reports by P. Sainath,” October 2019); and a study of the attempt to uberise agricultural workers and farmers (“Big Tech and the Current Challenges Facing the Class Struggle,” November 2021).

Our senior fellow, P. Sainath, has been a key voice in amplifying the agrarian crisis and farmers’ struggles. The section below is an extract from his most recent editorial at the People’s Archive of Rural India:

“What the media can never openly admit is that the largest peaceful democratic protest the world has seen in years – certainly the greatest organised at the height of the pandemic – has won a mighty victory.

A victory that carries forward a legacy. Farmers of all kinds, men and women — including from Adivasi [tribal] and Dalit [oppressed caste] communities — played a crucial role in [India’s] struggle for freedom. And in the 75th year of [Indian] Independence, the farmers at Delhi’s gates reiterated the spirit of that great struggle.

Prime Minister Modi has announced he is backing off and repealing the farm laws in the upcoming winter session of Parliament starting on the 29th of [November]. He says he is doing so after failing to persuade ‘a section of farmers despite best efforts’. Just a section, mind you, that he could not convince to accept that the three discredited farm laws were really good for them. Not a word on, or for, the over 600 farmers who have died in the course of this historic struggle. His failure, he makes it clear, is only in his skills of persuasion, in not getting that ‘section of farmers’ to see the light. … What was the manner and method of persuasion? By denying them entry to the capital city to explain their grievances? By blocking them with trenches and barbed wire? By hitting them with water cannons? … By having crony media vilify the farmers every day? By running them over with vehicles – allegedly owned by a union minister or his son? That’s this government’s idea of persuasion? If those were its ‘best efforts’ we’d hate to see its worst ones.

The Prime Minister made at least seven visits overseas this year alone (like the latest one for COP26). But never once found the time to just drive down a few kilometres from his residence to visit tens of thousands of farmers at Delhi’s gates, whose agony touched so many people everywhere in the country. Would that not have been a genuine effort at persuasion?

… This is not at all the end of the agrarian crisis. It is the beginning of a new phase of the battle on the larger issues of that crisis. Farmer protests have been on for a long time now. And particularly strongly since 2018, when the Adivasi farmers of Maharashtra electrified the nation with their astonishing 182-km march on foot from Nashik to Mumbai. Then too, it began with their being dismissed as ‘urban Maoists’, as not real farmers, and the rest of the blah. Their march routed their vilifiers.

… The hundreds of thousands of people in that state who have participated in that struggle know whose victory it is. The hearts of the people of Punjab are with those in the protest camps who have endured one of Delhi’s worst winters in decades, a scorching summer, rains thereafter, and miserable treatment from Mr. Modi and his captive media.

And perhaps the most important thing the protestors have achieved is this: to inspire resistance in other spheres as well, to a government that simply throws its detractors into prison or otherwise hounds and harasses them. That freely arrests citizens, including journalists, under the [Unlawful Activities (Prevention) Act], and cracks down on independent media for ‘economic offences’. This day isn’t just a win for the farmers. It’s a win for the battle for civil liberties and human rights. A win for Indian democracy.” 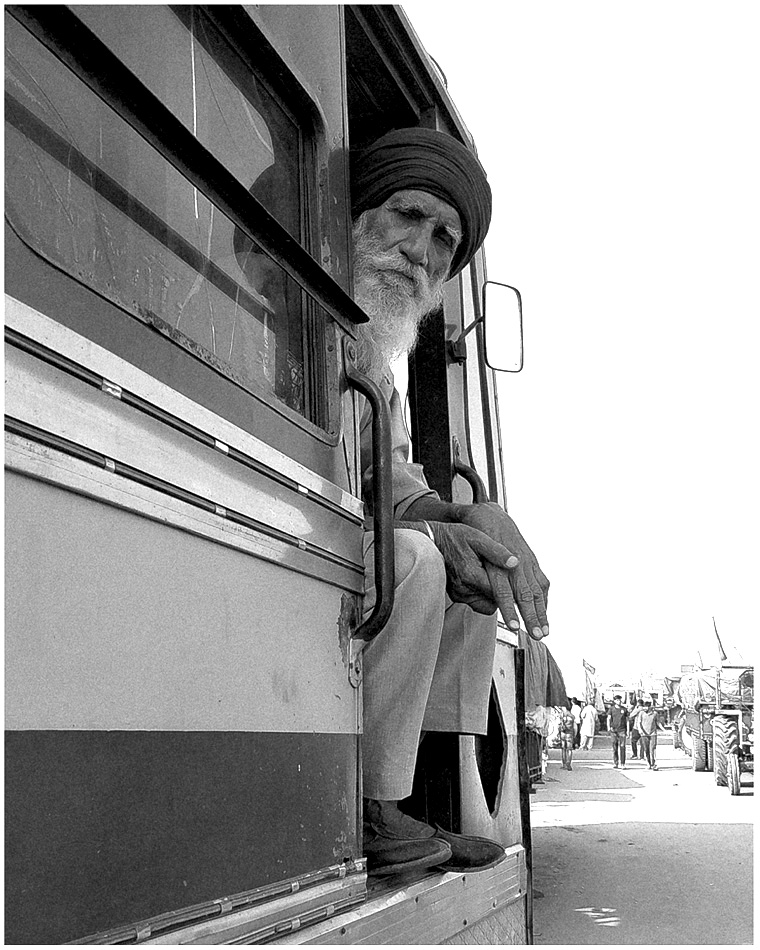 A farmer participates in the protests in his truck at the Singhu border in Delhi, Dec. 5, 2020. (Vikas Thakur, Tricontinental: Institute for Social Research)

It is a win not only for Indian democracy but for peasants around the world.

The next year, the World Bank’s World Development Report argued for integrating agriculture in the “poor countries with world markets.” which meant delivering the peasants into an uberised relationship with big agriculture. Interestingly, the World Bank’s own International Assessment of Agricultural Science, and Technology for Development disagreed in 2008, arguing that industrial agriculture degraded nature and impoverished peasants.

During the credit crisis of 2007–08, the World Bank intervened to promote the entry of the private sector (largely big agriculture) into the “value chains” from farms to stores.

“The private sector drives the organisation of value chains that bring the market to smallholders and commercial farms,” wrote the World Bank in a key report from 2008. In June of that year, the UN Food and Agriculture Organisation’s High-Level Conference on World Food Security opened the door for the World Bank to shape agricultural policy to benefit big agriculture.

The next year, the World Bank’s “World Development Report” argued for integrating agriculture in the “poor countries with world markets,” which meant delivering the peasants into an uberised relationship with big agriculture.

In September, the UN held a Food Systems Summit in New York, which was designed not by farmers’ unions but by the World Economic Forum (WEF), a private body that represents big business rather than the big hearts of the agriculturalists.

Acknowledging the crisis imposed by capitalism, the WEF now says that it has learned from civil action and would like to promote “stakeholder capitalism.” This new kind of capitalism, which looks like the old capitalism, is about promoting corporations as “trustees of society.” It entrusts corporations with our well-being rather than the workers who produce the value in our society.

The farmers’ revolt in India fought against Modi’s three laws, which will now be repealed. But it continues to struggle against the transfer of policy making from democratic, multilateral and national projects to corporations in the name of “public-private partnerships” and “trustees of society.” The repeal of Modi’s laws is one victory. It has lifted the confidence of the people. But there are other battles ahead. 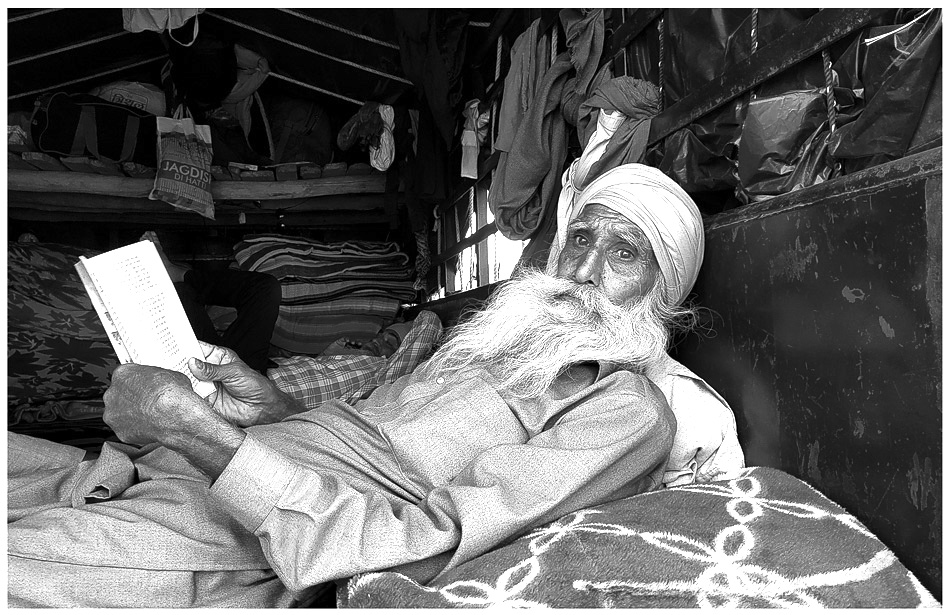 A farmer who joined in the initial protest reads work by the revolutionary Punjabi poet, Pash, in his trolly at the Singhu border in Delhi, Dec. 10. (Vikas Thakur, Tricontinental: Institute for Social Research)

At the protest sites, farmers set up entire villages, including community kitchens and libraries. Reading and musical performance were regular activities. Revolutionary Punjabi poetry from figures such as Pash (1950–1988) and Sant Ram Udasi (1939–1986) lifted their spirits. Navsharan Singh and Vikas Rawal offered us these stanzas from Sant Ram Udasi to close out this newsletter:

You must shine your light
in the courtyards of workers
who wither when there is a drought,
and drown when there is a flood,
ones who face devastation in every disaster,
and who find liberation only in death.

You must show what goes on
in the courtyards of the workers
for whom the bread is scarce,
who live in darkness,
who are robbed of
their self-respect,
and who lose, with their crops,
all their desires.

4 comments for “A Win For Indian Democracy”