Sam Pizzigati says the federal government should make use of the Defense Production Act and be ready to face the pharmaceutical giant in court. 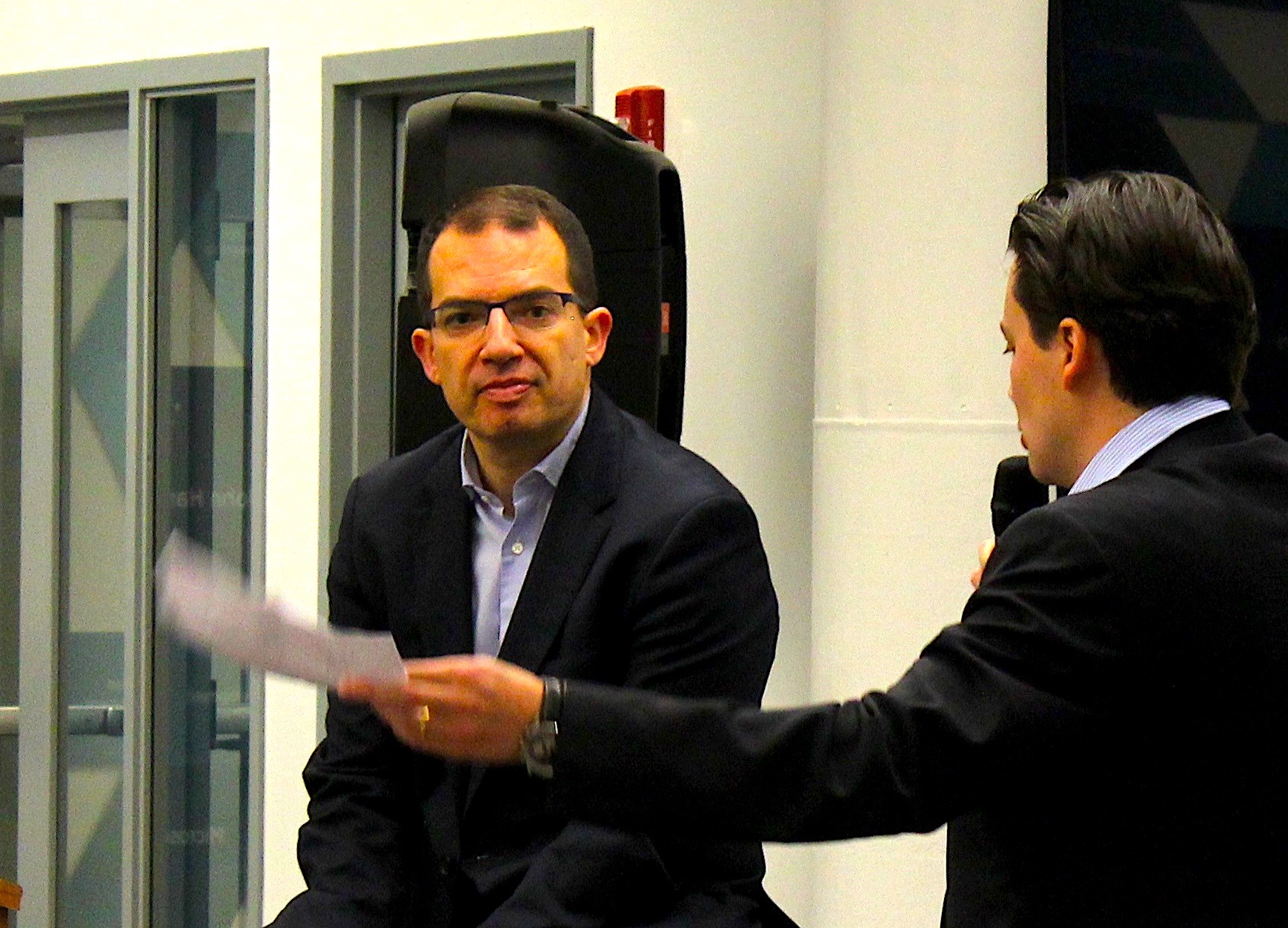 Moderna, the world’s hottest new Big Pharma giant, now has four of its top players sitting on the annual Forbes list of America’s 400 richest. In early 2020, Moderna had none.

Moderna’s Forbes 400 billionaire quartet owes its current good fortune completely to the company’s Covid-19 vaccine. And who made that vaccine possible? U.S. taxpayers. Moderna’s Covid vaccine, as Public Citizen research director Zain Rivzi puts it, “would not exist without the massive contribution of the federal government at every step of the way.”

The Biden administration’s chief science officer for the Covid response, David Kessler, calculates that the federal tax dollars handed to Moderna for vaccine development, testing, and initial manufacture total about $10 billion. And that figure doesn’t include the brainpower of the scientists at the U.S. National Institutes of Health who spent four years actively collaborating with Moderna’s researchers.

Moderna has now filed for a patent on the key vaccine breakthrough these scientists helped produce. The company’s patent application makes no mention of the NIH scientists, a snub that could, notes a Wired analysis, have “major ramifications.”

What sort of ramifications? With a patent that gives the federal scientists the credit they deserve, the U.S. government would be able to “license out the technology” for Moderna’s vaccine to “developing countries where vaccination rates remain low.”

But if Moderna gets its way — gets approval for a crucial patent that denies credit to federal NIH scientists — the company’s billionaires would have “sole control” over the Covid vaccine technology that U.S. scientists and tax dollars did so much to create. That control would enable Moderna to continue placing profits ahead of people. Way ahead of people.

[NIH and Moderna are currently in discussions over Moderna’s patent application.]

Over the course of this year’s first six months alone, Michael Hiltzik of The Los Angeles Times points out, Moderna “pocketed $4 billion in profits on $5.9 billion in revenue, almost entirely from its Covid vaccine, its only product.” 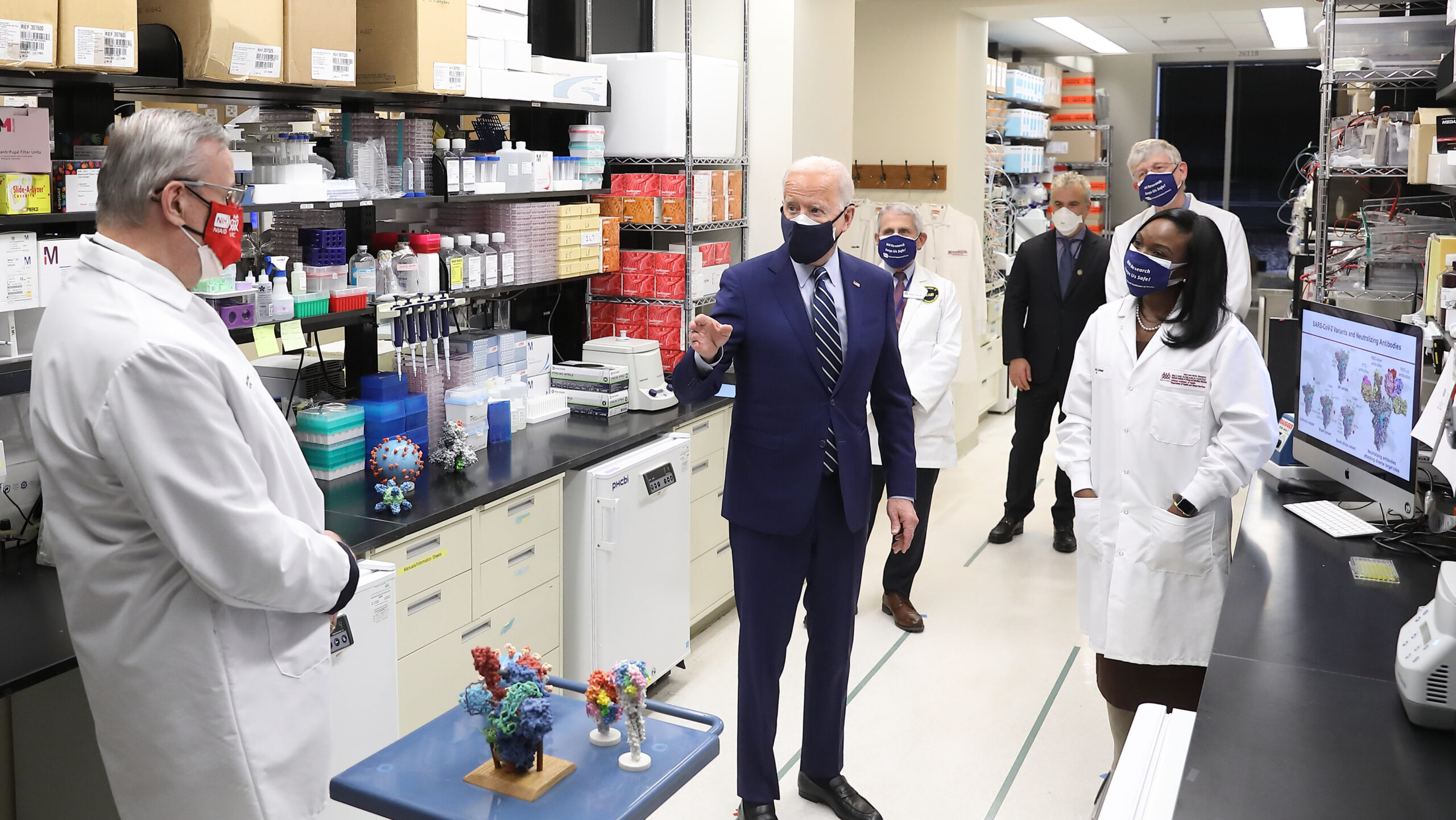 Dr. Barney Graham, left, and Dr. Kizzmekia Corbett, right, are two of the government scientists the NIH says should be named as co-inventors of the Moderna vaccine. President Joe Biden, center, is shown visiting the NIH vaccine center in February. (NIH, Chiachi Chang)

Those super profits drove the net worth of Moderna CEO Stéphane Bancel to $15 billion this past August. But that net worth has been sinking ever since, dropping to a mere $7 billion this past week. And that sinking will only accelerate if Moderna loses total control over the licensing and production of its flagship Covid vaccine.

Bancel and his fellow Moderna billionaires, in short, have plenty of incentive to write government scientists out of the most important patent for the injection that by all rights ought to known as the “NIH-Moderna” vaccine.

Bancel and the rest of the Moderna billionaire gang have, naturally enough, been diligently working to divert public attention from their personal pecuniary interest in insisting — as the company just did insist — that “only Moderna’s scientists designed” the vaccine now making billions for Moderna. Economic realities, they’re arguing, make continuing Moderna’s control over the vaccine’s distribution absolutely essential — for both battling Covid and any future pandemics that may confront us.

Profit rates on vaccines, argues CEO Bancel, simply must remain robust. Private investors won’t invest in potential breakthrough medications unless they “believe that there will be a return on their investment.” And only Moderna, Bancel and his pals add, has the manufacturing capacity to produce all the Moderna Covid vaccine the world needs.

“Within the next six to nine months,” Moderna chairman Noubar Afeyan asserts, “the most reliable way to make high-quality vaccines and in an efficient way is going to be if we make them.”

“In my opinion,” she noted last week, “we need to democratize manufacturing the vaccines moving forward.”

The federal government already has the tools to do that democratizing. The Defense Production Act, legislation enacted in 1950, builds on the War Powers Acts of 1941 and 1942 and now covers both military and domestic preparedness in emergency situations. Public Citizen’s Rizvi finds it “puzzling why all the authority of the Defense Production Act has yet to be used.”

“Despite receiving huge sums of public funding from American taxpayers,” the lawmakers point out, “Moderna has refused calls to share its technology.”

Moderna, the lawmakers also note, has a 2021 vaccine production goal that, even if met, “will still fall far short of the 11 billion doses experts estimate are needed” to get the global vaccination rate up to 70 percent of the world’s population. If vaccinations don’t hit close to that mark, hundreds of thousands of people worldwide — maybe millions of people — will die well before their time.

The Biden administration’s top spokesperson, Press Secretary Jen Psaki, last month affirmed that the administration “definitely” does want Moderna to share its “know-how with other parts of the world” to help beat back Covid. But Psaki refused, when reporters pressed the issue, to back the invocation of the Defense Production Act if Moderna continues to reject that sharing. The U.S. government, she said, “does not have the ability to compel Moderna to take certain actions.”

But the government does have that authority, independent observers believe, under the Defense Production Act. Might Moderna take the government to court if the Biden administration moves against Moderna’s billionaires? Sure. But people are dying who shouldn’t be. If that doesn’t rate as a reason for risking some intense courtroom combat, what does?