The UN climate treaty has forged an intimate partnership with the very corporations that have created the climate crisis, writes Vijay Prashad.

Kang Minjin of the Justice Party of Korea at COP26 in Glasgow, Nov. 6. (Hwang Jeongeun)

Nothing useful seemed to emerge from the United Nations Framework Convention on Climate Change (UNFCCC) at COP26 this week. The leaders of developed countries made tired speeches about their commitment to reversing the climate catastrophe. Their words rang with the clichés of spin doctors, their sincerity zero, their actual commitments to lowering carbon emissions nil.

Mitzi Jonelle Tan, a Filipino climate activist and spokesperson for Fridays for Future, said that these leaders “spew empty, tired promises,” leaving young people like her with a “sense of betrayal.” As a child, she said, she felt the danger of being caught up in flash floods in the Philippines, floods that have terrible repercussions for high-risk countries. “There’s a climate trauma that young people experience,” said Tan, “yet the UNFCCC keeps us out.” 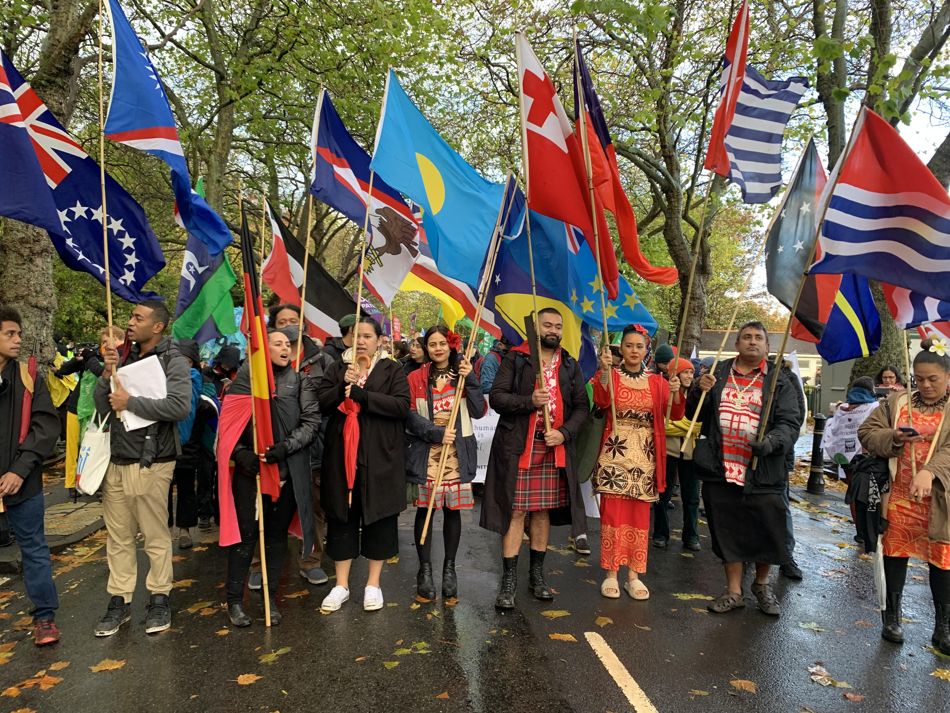 The Pacific Climate Warriors at COP26 in Glasgow, Nov. 6.

The youth-led Pacific Climate Warriors marched through rainswept Glasgow on Nov. 6, their flags of the South Pacific Islands fluttering in the fast wind. They were one amongst many groups from small island states and from areas with large populations of indigenous peoples who face great and urgent threats to their existence. “We don’t want your pity,” said Reverend James Bhagwan of the Pacific Climate Warriors. “We want action.”

War and its environmental discontents were also on the minds of many. From 1981–2000, the Greenham Common Women’s Peace Camp was set up as a permanent protest against the storage of Trident nuclear missiles in the United Kingdom. Alison Lochhead, a former resident of the Peace Camp, marched in Glasgow with determination. “Where will you now set up your camp?” I asked her. “Across the world,” she replied – a world in which the United States military is the largest institutional polluter.

Activist Myshele Haywood marched with her dog and a sign that read, “The global military is the world’s biggest polluter.” The other side of the sign read, “Oil is too precious to burn. Save it to make medicine, plastics, and other things.”

The US military produced over 1.2b tonnes of carbon emissions during the war on terror and is a bigger polluter than 140 countries, yet military pollution is exempt from the agreements at #COP26 pic.twitter.com/Z7Ax4L92yK

On Nov. 7, during the COP26 Coalition People’s Summit, I was on the jury of The People’s Tribunal on the UNFCCC and its failure to address a range of issues. We heard from a range of rapporteurs and witnesses, each speaking with great feeling about the differential climate catastrophes on nature and on human life.

Every minute, $11 million is spent to subsidize fossil fuels (that’s $5.9 trillion spent in 2020 alone). This money underwrites the cascading climate catastrophe, yet few funds are raised to mitigate the negative effects of fossil fuels or to transition to renewable forms of energy.

The remainder of this newsletter details the findings of the Tribunal, which was comprised of Ambassador Lumumba Di-Aping (former chief climate negotiator for the G77 and China), Katerina Anastasiou (Transform Europe), Samantha Hargreaves (WoMin African Alliance), Larry Lohmann (The Corner House), and me. 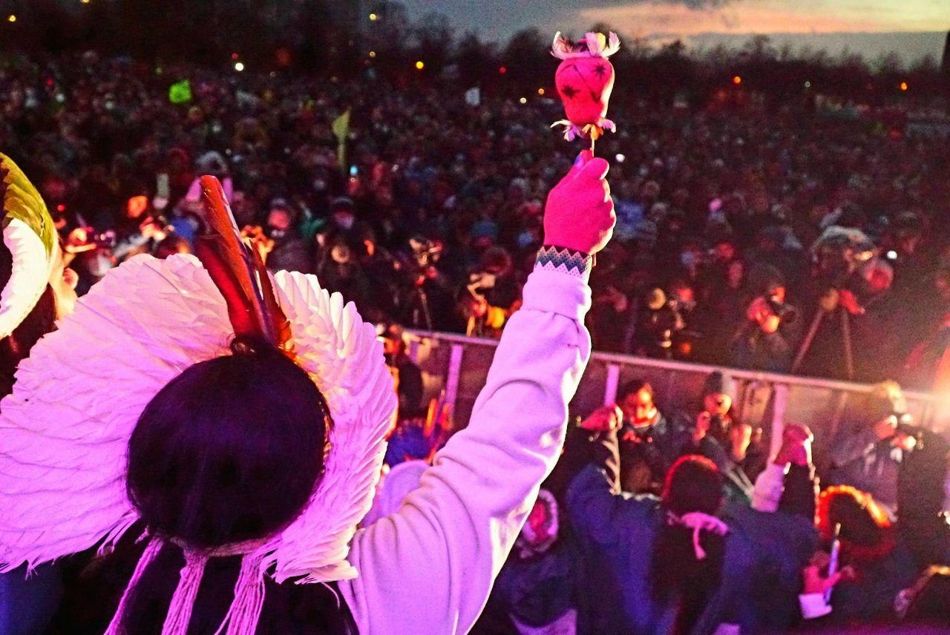 Sonia Guajajara of the Articulation of Indigenous Peoples of Brazil addresses a crowd at #GlobalDayOfAction in Glasgow. (Agisilaos Koulouris)

Verdict of The People’s Tribunal: People & Nature vs UNFCCC on Nov. 7

There were six charges put before the Tribunal concerning the failures of the UNFCCC to:

The jury of five listened carefully to the special prosecutor, to the rapporteurs, and to the witnesses. We were unified in our conclusion that the UNFCCC, which was signed by 154 nations in 1992 and ratified by 197 countries by 1994, has utterly failed the peoples of the world and all species that rely on a healthy planet to survive by failing to stop climate change. This perilous inaction has failed to limit the increase of the average global temperature.

In its latest 2021 reports, the Intergovernmental Panel on Climate Change (IPCC) found that the Earth has reached an average temperature increase of 1.1 degrees, while sub-Saharan Africa is close to breaching the ‘safe’ 1.5 degree mark.

The UNFCCC has forged an intimate partnership with the very corporations that have created the climate crisis. It has allowed powerful governments to threaten poor countries into submission, guaranteeing certain misery and death for hundreds of millions of people in the poorest parts of the world over the next two decades.

The UNFCCC’s inaction has permitted powerful oil, mining, agriculture, logging, aviation, fishing, and other corporations to continue their carbon intensive activities unfettered. This has contributed to a growing biodiversity crisis: recent estimates suggest that anywhere from 2,000 species (at the low end) to 100,000 species (at the high end) are being exterminated each year. The UNFCCC is implicated in mass extinction.

The UNFCCC has refused to democratise the process and to listen to those on the frontlines of the crisis. This includes the one billion children who live in the 33 countries that are at ‘extremely high risk’ due to the climate crisis – in other words, almost half of the world’s 2.2 billion children – as well as indigenous communities and working-class and peasant women from the countries and nations that bear the brunt of a crisis that they did not produce.

Powerful nations in the UNFCCC have forced a rollback on earlier commitments to global redress for the long history of unequal and uneven development between nations. Developed countries pledged $100 billion per year for the climate fund but they have failed to provide that money, thereby neglecting their own commitments. Instead, developed countries plough trillions of dollars into their own national efforts to mitigate the impacts of climate change and support adaptation to a warming climate, while the poorest and most heavily indebted nations are left to fend for themselves.

We, the jury, find that the UNFCCC violated the UN Charter, which demands that UN members states ‘take effective collective measures for the prevention and removal of threats to peace’ (Chapter 1). The Charter charges states ‘to achieve international cooperation in solving international problems’.

The UNFCCC has also violated Chapter IX of the UN Charter, ignoring Article 55’s demand to create ‘conditions of stability and well-being’ as well as ‘economic progress and social progress’ and to promote ‘universal respect for, and observance of, human rights.’ Furthermore, the UNFCCC has violated Article 56, which enjoins member states to take ‘joint and separate action in cooperation’ with the UN.

We, the jury of the People’s Tribunal, find the UNFCCC guilty of the charges made by the special prosecutor and established by the witnesses. In light of our sentence, we claim the following measures of redress for the peoples of the world:

The Marshall Islands, a chain of coral atolls and volcanic islands, is one of 14 countries in Oceania that is greatly threatened by rising sea levels. Recent studies show that 96 percent of Majuro, the capital, is at risk of frequent flooding while 37 percent of the city’s existing buildings face ‘permanent inundation’ in the absence of any form of adaptation.

In 2014, Kathy Jetñil-Kijiner, a Marshallese poet, wrote a rousing poem for her 7-year-old daughter Matefele Peinam:

4 comments for “COP26: Why Compromise Our Lives?”