Morganne Blais-McPherson recounts a victory by  immigrant workers and a growing, independent union that represents them. 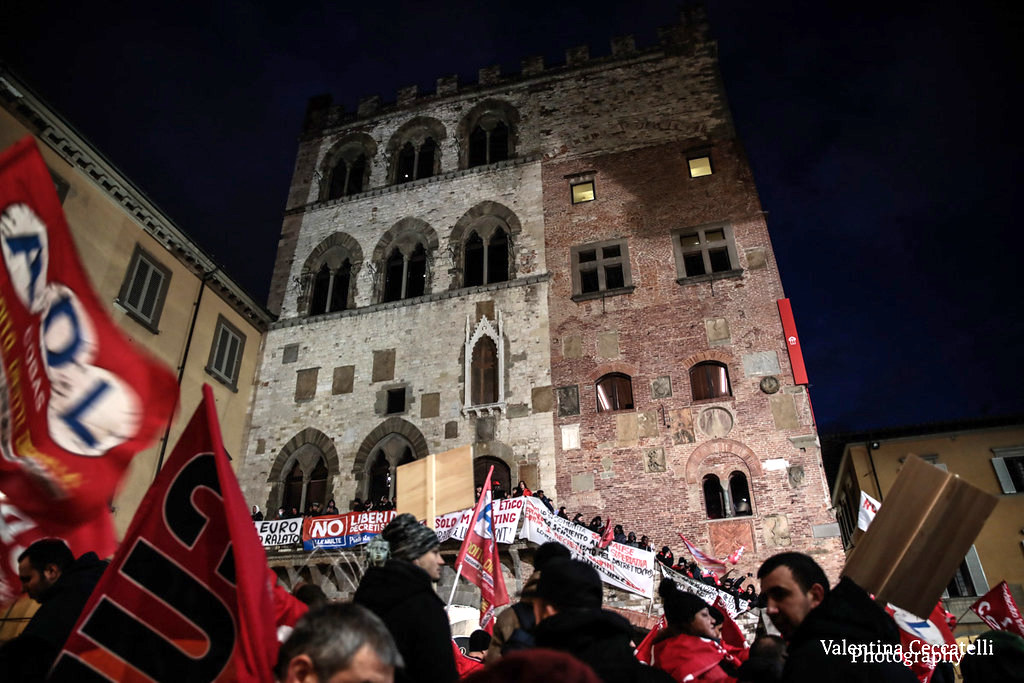 Jan. 18, 2020: Demonstration outside the old city hall of Prato, Italy, after workers and students were fined for road-blocking during a strike called by Si Cobas. (Valentina Ceccatelli, Flickr, CC BY-NC-SA 2.0)

Tired of working 12 hours a day, seven days a week, immigrant textile workers are at the center of a growing movement by Italy’s workers for the right to “8×5”— eight-hour days, five days a week.

In January, a group of 18 workers at the fabric printing company Texprint in the city of Prato launched a strike for a 40-hour work week. On Oct. 12, three Pakistani workers returned to work victorious after a grueling nine months on strike — “never again as slaves” (mai piu schiavi), as one of their slogans put it.

It was a day of celebration for immigrant workers across the city’s industrial district, as well as for Si Cobas, the growing, militant, independent union that represents them. The union expects that the provincial labor court will soon order the company to rehire the rest of the strikers on permanent 40-hour-a-week contracts.

Though met with high levels of repression from both their employer and law enforcement, the strike has put a spotlight on the widespread abuses against workers in Prato, a city at the manufacturing heart of the Made in Italy fashion industry.

These workers’ militant tactics have inspired nearby factory workers, all the while receiving little support from Italy’s major unions or political parties.

I’ve been coming to Prato since 2017, when I started research in this city, 12 miles from Florence and home to one of the most important textile districts in Europe.

For years, the exploitation in Prato’s industrial district has been something of an open secret. Time and time again, locals have told me in hushed voices that workers, many of them immigrants from China, South Asia, and West Africa, work 12-hour days without time off, often without contracts. Community members would often call into question the level of workplace safety in the district, devastatingly answered during fatal factory fires of 2013 and 2017.

This May, 22-year old textile worker Luana D’Orazio was fatally dragged into a machine whose safety equipment had been removed to speed up production. Her death was the most high-profile in a wave of workplace fatalities that have sparked a national outcry over working conditions.

Texprint is a fabric manufacturer which employs around 30 workers at its lone facility. While most workers had nominal contracts when the strike began, many were disingenuously employed on “apprenticeship” contracts which allowed the owners of Texprint to skirt taxes and keep workers precarious. And while Italy’s national contract for workers in the textile industry includes the right to paid holidays, breaks, sick leave, and compensation for workplace injuries, Texprint workers saw none of these.

When one worker lost a piece of his finger to a machine whose safety equipment had also been removed, his boss drove him to the hospital and instructed him to say he had been hurt at home. When the worker told the truth, he was furloughed. Receiving no compensation and fearing future injuries, the worker explained why he joined the strike: “First the finger, then the hand?! Then the arm?! Then I’m dead!” 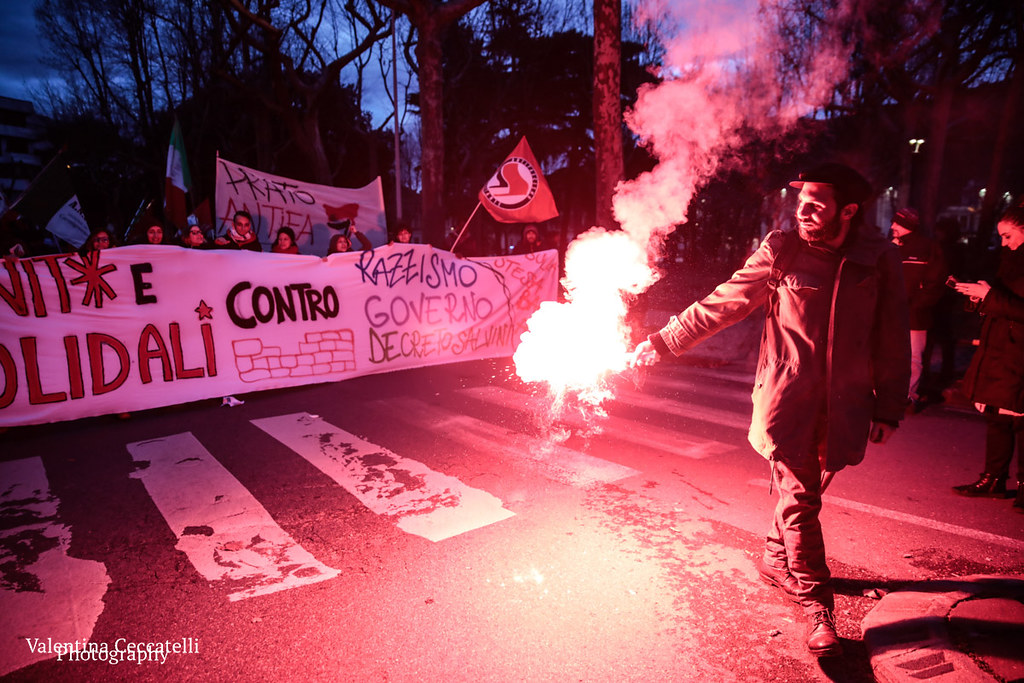 Jan. 18, 2020: Demonstration in Prato, Italy, after workers and students were fined for roadblocking during a strike called by Si Cobas. (Valentina Ceccatelli, Flickr, CC BY-NC-SA 2.0)

The desire to change these abusive working conditions led a small group of Texprint workers to seek support from Si Cobas (the Union of Cross-Firm Base Committees).

Particularly known for its militant tactics and organizing in Northern Italy’s logistics sector, Si Cobas mostly represents immigrant workers. The union, founded in 2010 and operating in over 20 Italian cities, has been expanding its presence elsewhere in the country, and has organized in this area for three years: beginning in Florence’s logistics sector, then arriving in Prato’s textile industry. Their aggressive tactics include strikes and roadblocks, which many workers in Prato’s factories perceive as necessary actions to improve their situation.

These roadblocks typically involve standing or sitting in front of the gates to a factory or warehouse in order to block the flow of merchandise to and from the shopfloor. In the textile industry, though company agents may carry unprinted fabric into the factory by foot, they are blocked from bringing printed fabric out, translating into heaps of finished product piling up in a factory and the loss of clients who require timely deliveries.

To be successful, these roadblocks require accurate identification of company trucks and their allies. In cases such as Texprint, where multiple businesses are located on the same private road, strikers face added difficulty as owners seek to circumvent the blockade by using personal cars or trucks from other companies. Owners may also have agreements with other companies who let them use their machines to continue production, thus requiring strikers to be on the lookout for company trucks circulating in the industrial area.

Since many factories operate 24/7, these roadblocks can also be permanent, requiring massive community support as strikers and their comrades build a home in front of the factory with food, tents, mattresses, tables, cooking equipment, and a porta-potty. While maintaining a 24/7 roadblock can take a toll on participants, such infrastructure also allows for a myriad of projects important to sustaining long-term worker organization. For example, an Italian language school was started at the roadblock, a transformative initiative that allowed many immigrant workers to learn basic Italian language skills for the first time. 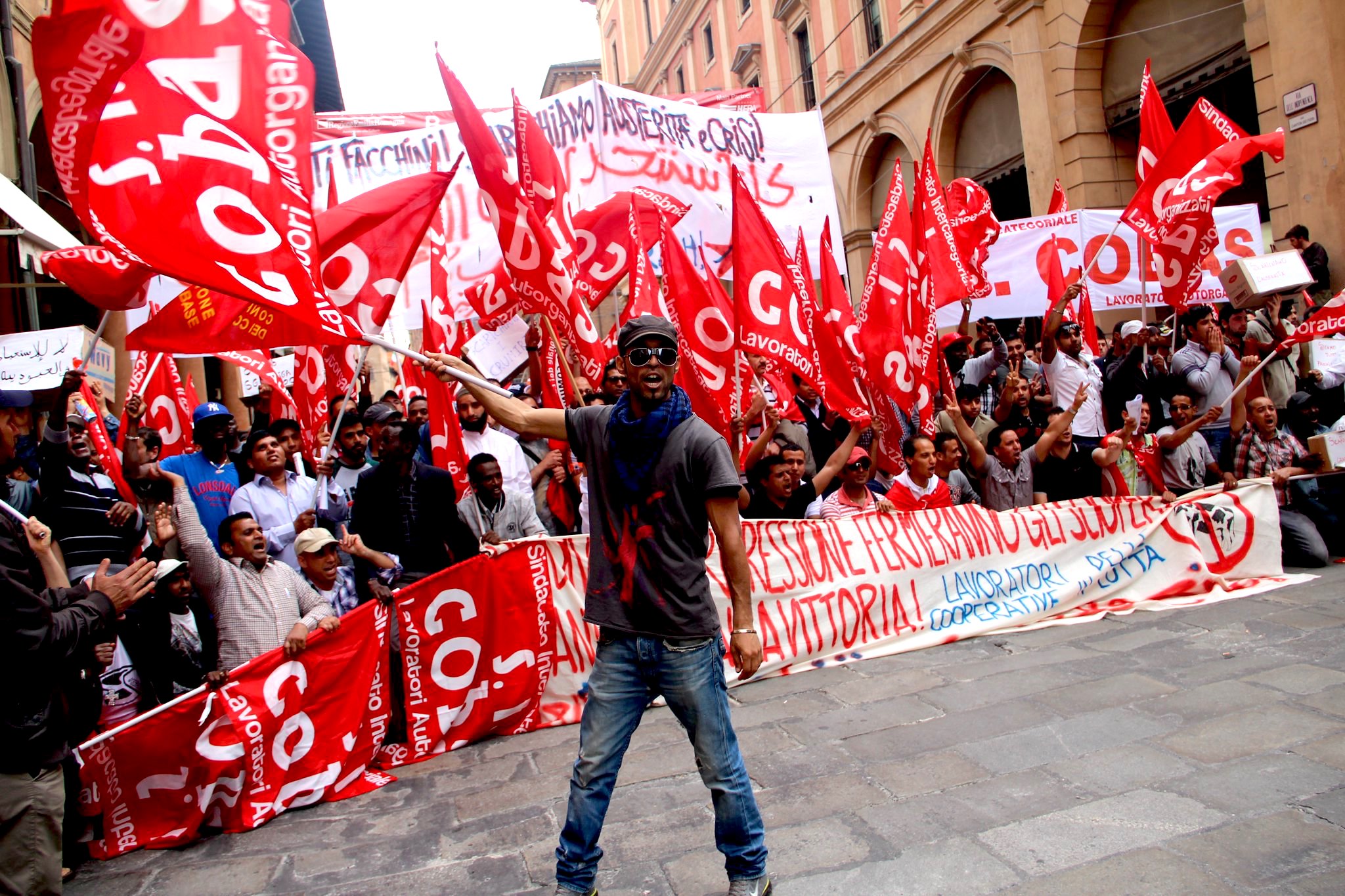 Though Si Cobas is relatively new, independent, base unions have been active in Italy for three decades, largely emerging as a response to perceived conservative shifts of Italy’s three union confederations (CGIL, CISL, and UIL). Cobas, an acronym for “Comitati di base” (base committees), refers to a group of such unions that exist outside these three main confederations. Unlike the confederations, Si Cobas is not recognized as a negotiating body in determining national contracts. And unlike these unions, it does not have close ties with Italy’s political elite.

This relative isolation is particularly felt in Prato, where episodes of repression towards Si Cobas members are frequent and support from major institutions scarce. Since the beginning of the strike, workers and union activists have been arrested and violently dispersed.

This summer, company henchmen assaulted workers at the picket line with sticks and bricks. The assault was filmed by a worker whose finger was broken as henchmen took his phone. Texprint has yet to be held accountable — while over 40,000 euros in fines have been levied against individuals involved in strike actions.

A few months after the strike began, the vast majority of striking Texprint workers were fired. This retaliation towards workers who exercise their constitutional right to strike is common in Prato, as is discrimination towards Si Cobas members. Union organizers have received formal orders to leave the city; they have to get permission to enter Prato approved by authorities ahead of time.

In the past couple years, workers have been fired and had their pay suspended after joining or even being suspected of contacting Si Cobas. Employers have also refused to fill out declarations that immigrants require from their employer to renew their residency permits.

In spite of this repression, retaliation, and overall precarity, Texprint workers braved nine months on strike and won.

On Sept. 29, Prato’s Labor Court deemed the dismissal of a Texprint worker illegitimate and ordered the company to rehire the worker on a permanent 8×5 contract. Si Cobas leaders predict this decision will be repeated in all the remaining cases, and will pressure institutions to award back pay and transform the local immigration process that currently feeds into the city’s widespread exploitation.

Since the Texprint strike began, many nearby factory workers have been inspired to strike. Many of these workers frequented the picket line and decided that they too needed to fight for 8×5. Unlike the Texprint strike, these strikes were often won quickly. One Texprint worker said that employers seemed to have learned a lesson: “They saw that those Texprint guys have been there for six months and they were smart. They figured it out.”

Texprint workers know well that fear is contagious. But as one of their chants goes, this is “a tough struggle without fear” (lotta dura senza paura). If you’re afraid, you can’t do anything, workers often explained to me. But with courage, others too will join the fight.

Morganne Blais-McPherson is a graduate student at the University of California-Davis and a member of UAW Local 2865.