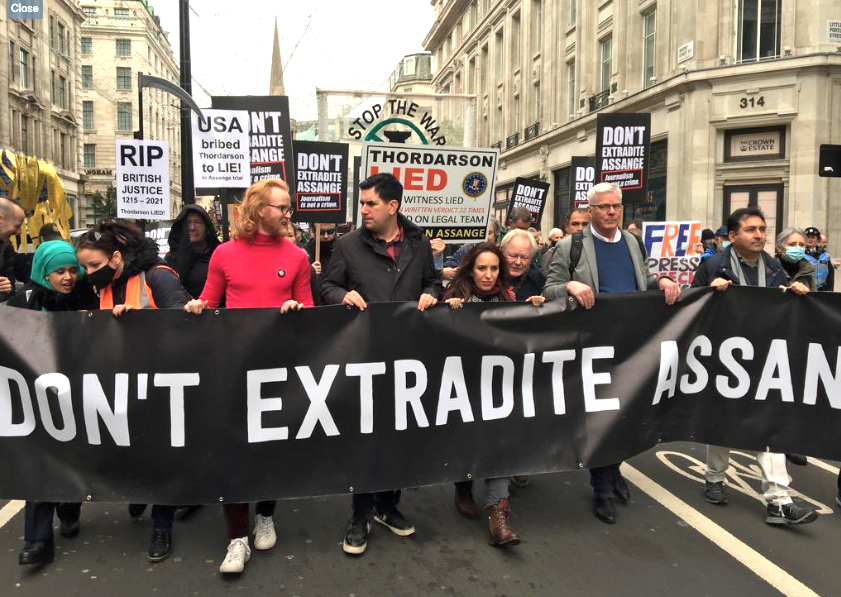 Former President Barack Obama, concerned about threats to the First Amendment freedom of the press, decided against indicting Assange for exposing U.S. war crimes. Trump did indict Assange, under Espionage Act charges that could garner him 175 years in prison. A British district judge denied Trump’s request for Assange’s extradition from the U.K. to the United States because of the extremely high likelihood that it would lead Assange to commit suicide. Trump appealed the denial of extradition.

Instead of dropping Trump’s extradition request, Biden is vigorously pursuing his predecessor’s appeal against Assange, which the U.K. High Court will hear on Wednesday and Thursday. At that hearing, the High Court should determine what effect the CIA’s recently revealed plan to kidnap and assassinate Assange will have on his fragile mental state in the event he is extradited to the United States.

On Jan. 4, U.K. District Judge Vanessa Baraitser issued a 132-page decision denying extradition. “Faced with conditions of near total isolation and without the protective factors which moderate his risk at HMP Belmarsh [where Assange is currently imprisoned],” she wrote, “I am satisfied that the procedures described by Dr. [Leukefeld] will not prevent Mr. Assange from finding a way to commit suicide.”

Baraitser relied heavily, though not exclusively, on the testimony of Professor Michael Kopelman, emeritus professor of neuropsychiatry at Kings College London. Kopelman diagnosed Assange with post-traumatic stress disorder and recurrent depression and concluded, “I am as confident as a psychiatrist ever can be that, if extradition to the United States were to become imminent, Mr. Assange will find a way of suiciding.”

“I am satisfied that the risk that Mr. Assange will commit suicide is a substantial one,” Baraitser determined. “I find that the mental condition of Mr. Assange is such that it would be oppressive to extradite him to the United States of America.”

The Biden administration is arguing that Baraitser should have disregarded Kopelman’s evidence or accorded it less weight because he didn’t write in his first report that Assange had a partner, Stella Moris, and they had two young children together. Although Kopelman knew about them, he was mindful of Moris’ anxiety about her children’s privacy. Both Kopelman’s subsequent report and his testimony at the extradition hearing referred to Moris and their children. By then, it was public knowledge.

Baraitser, who considered both of Kopelman’s reports as well as his testimony before ruling, wrote:

“[Kopelman] assessed Mr. Assange during the period May to December 2019 and was best placed to consider at first-hand his symptoms. He has taken great care to provide an informed account of Mr. Assange’s background and psychiatric history. He has given close attention to the prison medical notes and provided a detailed summary annexed to his December report. He is an experienced clinician and he was well aware of the possibility of exaggeration and malingering. I had no reason to doubt his clinical opinion.”

The United States will be allowed to present “assurances” that if Assange is extradited and imprisoned, he will not be subject to special administrative measures (SAMs) — onerous conditions that would keep him in virtual isolation — or be held at the ADX maximum security prison in Florence, Colorado.

The U.S. intends to provide an additional assurance that it would not object to Assange serving any custodial sentence he may receive in Australia. These so-called assurances, however, are conditional. The U.S. reserves the right to impose SAMs or hold Assange at ADX if his future behavior warrants it. Moreover, the U.S. cannot guarantee that Australia would consent to hosting Assange’s incarceration.

The High Court should give considerable weight to the way in which explosive new revelations of the Trump administration’s plot to kidnap and assassinate Assange will affect his mental health if he is extradited.

US Plans to Kidnap & Assassinate Assange 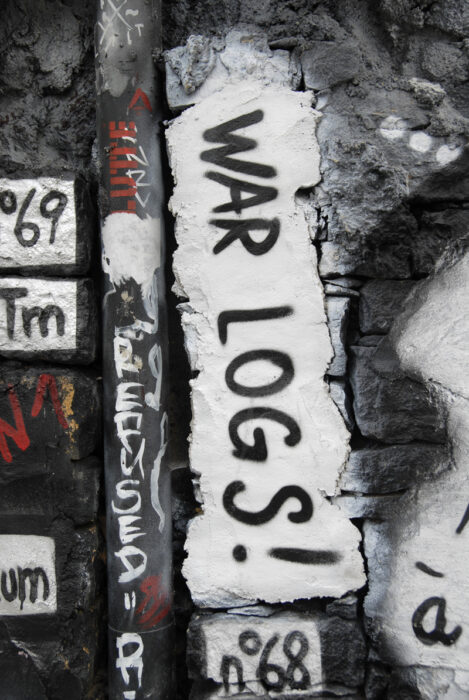 The indictment against Assange stems from WikiLeaks’ 2010-2011 revelations of U.S. war crimes in Iraq, Afghanistan and Guantánamo. They included 400,000 field reports about the Iraq War, 15,000 unreported deaths of Iraqi civilians, and evidence of systematic torture, rape and murder after U.S. forces “handed over detainees to a notorious Iraqi torture squad,” the documents reveal.

They included the Afghan War Logs, 90,000 reports revealing more civilian casualties by coalition forces than the U.S. military had reported. And the Guantánamo Files contained 779 secret reports revealing that 150 innocent people had been imprisoned there for years and documenting the torture and abuse of 800 men and boys, in violation of the Geneva Conventions and the Convention Against Torture and Other Cruel, Inhuman or Degrading Treatment or Punishment.

Perhaps the most notable release by WikiLeaks was the 2007 “Collateral Murder” video, in which a U.S. Army Apache helicopter gunship in Baghdad targets and fires on unarmed civilians. At least 18 civilians were killed, including two Reuters journalists and a man trying to rescue the wounded. Two children were injured. A U.S. Army tank then drives over one of the bodies, cutting it in half. The video depicts three separate war crimes prohibited by the Geneva Conventions and the U.S. Army Field Manual.

It was WikiLeaks’ publication of CIA hacking tools known as “Vault 7,” which the agency called “the largest data loss in CIA history,” that incurred the wrath of Trump’s CIA Director Mike Pompeo. Vault 7 materials revealed electronic surveillance and cyber-warfare by the CIA. 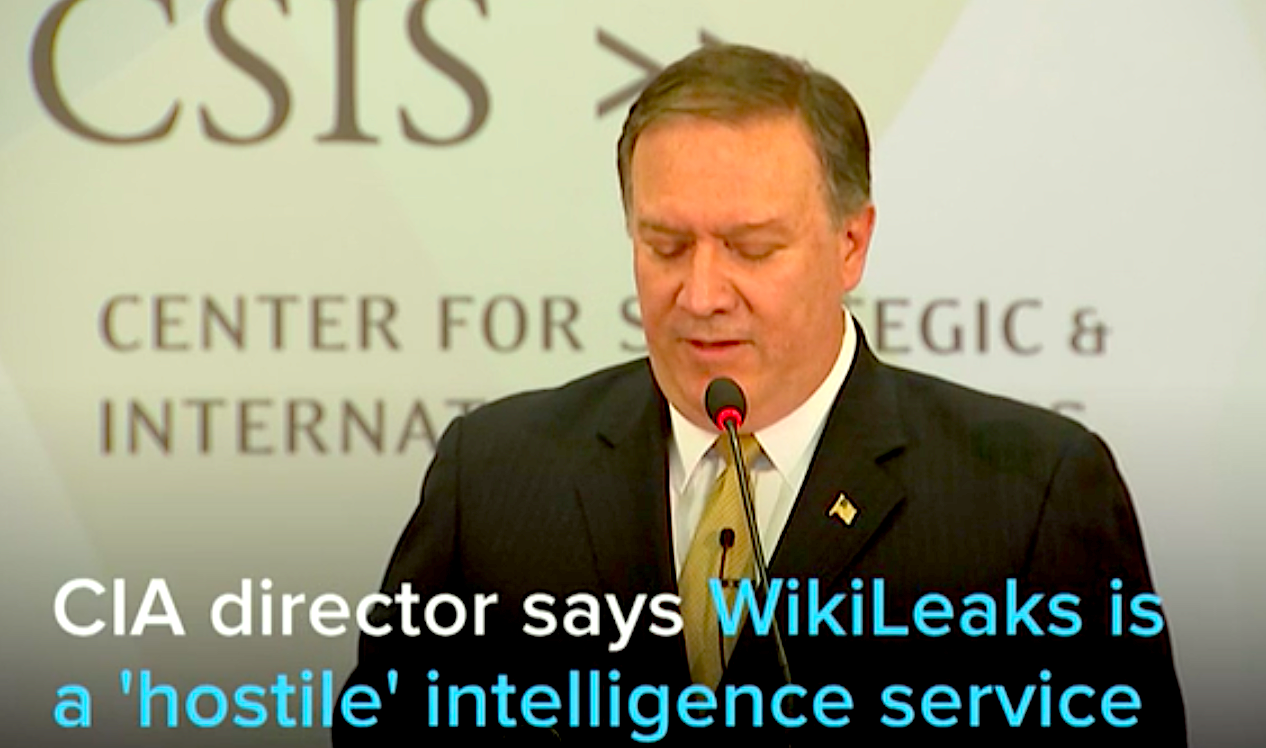 In 2017, Pompeo called WikiLeaks a “non-state hostile intelligence service” and CIA and government officials hatched “secret war plans” to abduct and kill Assange, according to a stunning Yahoo! News report. Some senior CIA and Trump administration officials requested “sketches” or “options” for ways to assassinate Assange. Trump “asked whether the CIA could assassinate Assange and provide him ‘options’ for how to do so,” according to the report.

Pompeo advocated “extraordinary rendition,” which the CIA used in the “war on terror” to illegally seize suspects and send them to its “black sites” where they were tortured. The scenario was that the CIA would break into the Ecuadorian embassy in which Assange was staying under a grant of asylum and clandestinely fly him to the United States to stand trial. Others in the agency wanted to assassinate Assange outright by poisoning or shooting him to avoid the hassle of kidnapping him.

The CIA spied on WikiLeaks, and it aimed to sow discord among the group’s members and steal their electronic devices, according to the Yahoo! News report. The CIA also conducted illegal surveillance inside the Ecuadorian embassy and spied on privileged attorney-client communications between Assange and his lawyers.

Concerned that the CIA might kidnap or kill Assange, which could jeopardize a potential criminal prosecution, the Department of Justice (DOJ) filed a secret indictment against him in 2018. To bolster the DOJ’s case for extradition, the FBI collaborated with informant Siggi Thordarson to paint Assange as a hacker instead of a journalist. Thordarson later admitted to the Icelandic newspaper Stundin that he lied about Assange being a hacker in return for immunity from prosecution by the FBI.

In 2019, after a new pro-U.S. president came to power in Ecuador, in order to facilitate the U.S. attempted extradition, London police dragged Assange from the embassy and arrested him for violating bail conditions. Assange remains in custody in London’s maximum security Belmarsh Prison pending Biden’s appeal of the extradition denial.

The High Court should give great weight to the U.S. plans to kidnap and assassinate Assange. The knowledge of those revelations will put even more mental stress on Assange, whom UN Special Rapporteur on Torture Nils Melzer described as having suffered “prolonged exposure to psychological torture” during his confinement.

The High Court should affirm the district court’s denial of extradition.

“When Assange published hundreds of thousands of classified military and diplomatic documents in 2010, the public was given an unprecedented window into the lack of justification and the futility of the wars in Afghanistan and Iraq,” Assange Defense co-chairs Daniel Ellsberg, Alice Walker and Noam Chomsky wrote at Newsweek. “The truth was hidden by a generation of governmental lies. Assange’s efforts helped show the American public what their government was doing in their name.”

Recent revelations of Pompeo’s threats against Assange that appeared in Yahoo! News have shed light on the dangers the national security state poses to investigative journalism and the public’s right to know. In light of these new disclosures, a coalition of 25 press freedom, civil liberties and international human rights organizations have intensified their call for dismissal of the DOJ’s charges against Assange.

Adam Schiff, chairman of the House Intelligence Committee, said his committee has asked the CIA for information about plans to kidnap or assassinate Assange.

Biden’s appeal of the denial of extradition should be dismissed. Julian Assange should be released and celebrated for his courage.

Marjorie Cohn is professor emerita at Thomas Jefferson School of Law, former president of the National Lawyers Guild, and a member of the bureau of the International Association of Democratic Lawyers and the national advisory board of Assange Defense.